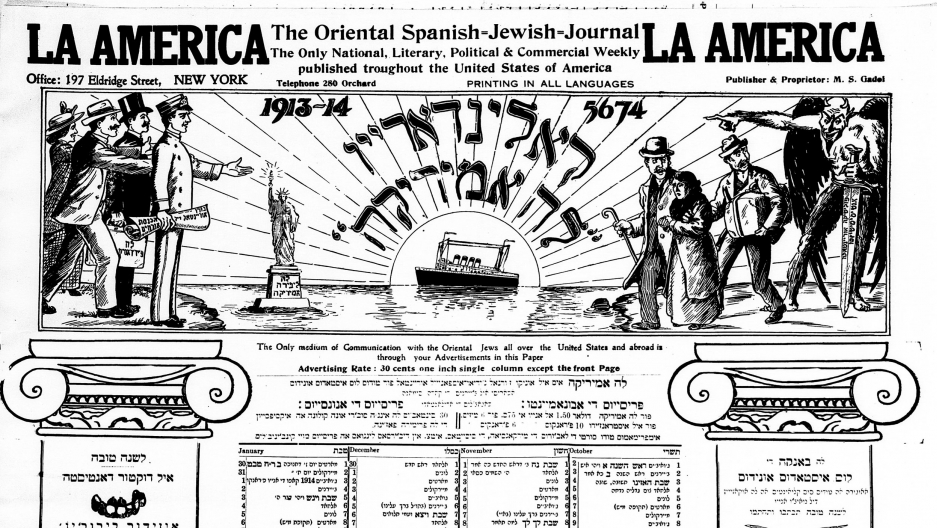 The masthead of a calendar for La Amérika, one of the major Ladino newspapers published in New York in the early 20th century. It is called "The Oriental Spanish-Jewish Journal" in the rhetoric of the era. The illustration depicts a devilish figure with a sword on which is written, in Ladino, "Oriental or eastern/middle eastern politics. antisemitism" — the factors sending new immigrants to the US from the Ottoman Empire.

Courtesy of Devin Naar via The Jewish Historical Press/Creative Commons

The first clue was that my grandfather never knew his birthday. It was 1917. But was it February or March? And which specific date? For some of his siblings, the discrepancy between their multiple alleged birthdays was a couple of years. 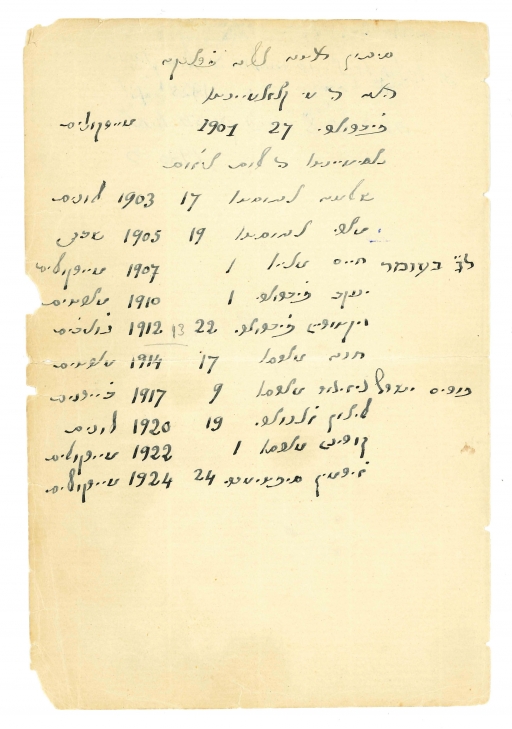 The dates of birth, according to the European Gregorian calendar, for Rabbi Benjamin and Rachel Naar's children, as handwritten in Ladino in the now-defunct Sephardic style of Hebrew cursive known as soletreo.

I deciphered the answers in my great-grandfather’s family ledger. On one page, he had listed his children’s real birthdates; on the next, the birthdates that he had submitted to US immigration authorities.

My great-grandfather doctored the “official” birthdates for several of his children, making them younger by a few years. He wanted to be sure they would be registered as minors and eligible for a visa that would keep his family together as they immigrated from Greece to the US in 1924.

Was I the progeny of immigrants who came to this country by illicit means?

When I first put the pieces together, I wavered between thinking that it was no big deal and recognizing that I had stumbled upon a never-before-spoken family secret. Was I the progeny of immigrants who came to this country by illicit means?

The question is even more pressing in light of the Trump administration's attacks on US immigration. Efforts to deport undocumented immigrants, expansions to the “public charge” rule excluding low-income immigrants, and drastic cuts to the number of refugees admissions — down to 18,000 — are just a few of the administration's anti-immigrant policies.

The White House recently announced measures that would cut access to legal immigration by as much as two-thirds, some experts predicted — excluding those unable to demonstrate the ability to secure or pay out of pocket for healthcare. A judge issued a temporary restraining order on the proclamation Saturday, just a day before it was scheduled to go into effect on Nov. 3. But these policies harken back to the origins of immigration restriction a century ago that sought to keep “undesirables” — like my family — out.

The rising tide of xenophobia during World War I intensified immigration restrictions in the US, not only focused on the Chinese Exclusion Act of 1882, but also targeting southern and eastern Europeans, as well as Middle Easterners. The Naturalization Act of 1790 only allowed “free white person[s]” to become naturalized citizens of the United States — and race-based exclusions persisted through the mid-20th century.

Related: The US has come a long way since its first, highly restrictive naturalization law

As Sephardic Jews from Salonica (or Thessaloniki), once home to the most robust Jewish community in the Ottoman Empire and the second biggest city in Greece today, my family was caught right in the middle. The many expressions of identity among Sephardic Jews rendered them susceptible to a trifecta of prejudice — as Jews; as speakers of Ladino, a Spanish-based Jewish language; and as natives of the Muslim “Orient.” Their designation as “Oriental Jews” and racialization as “swarthy” “Mediterranean types” added to the precarity of their situation.

US immigration restrictions in the early 20th century sought to curtail the “stream of alien blood” viewed as undermining the allegedly white racial character of the country.

US immigration restrictions in the early 20th century culminated with a 1924 quota law that, in the words of its principal architect, Albert Johnson, a Washington state congressman, sought to curtail the “stream of alien blood” viewed as undermining the allegedly white racial character of the country. Johnson particularly targeted Jews, whom he deemed “filthy, un-American, and often dangerous in their habits.” In the face of the new quota system, a new visa requirement, and the establishment of the Border Patrol in 1924, my family's fabricated birthdates were necessary — and worth it. They saved my forebearers’ lives and made mine possible.

Related: For a child migrant, days feel like a lifetime when you’re imprisoned and alone

“Shaving” birthdates was a typical but risky maneuver, which, if exposed, could have resulted in my family being fined up to $10,000 (around $145,000 today) and/or sentenced to five years in prison. But this reflected the arbitrary nature of US immigration law in general. In a country built on lands confiscated from Indigenous peoples, the categories of “legal”/“illegal” and “desirable”/”undesirable” immigrants were forged only a century ago — in a national cauldron of eugenics, racism and nativism. 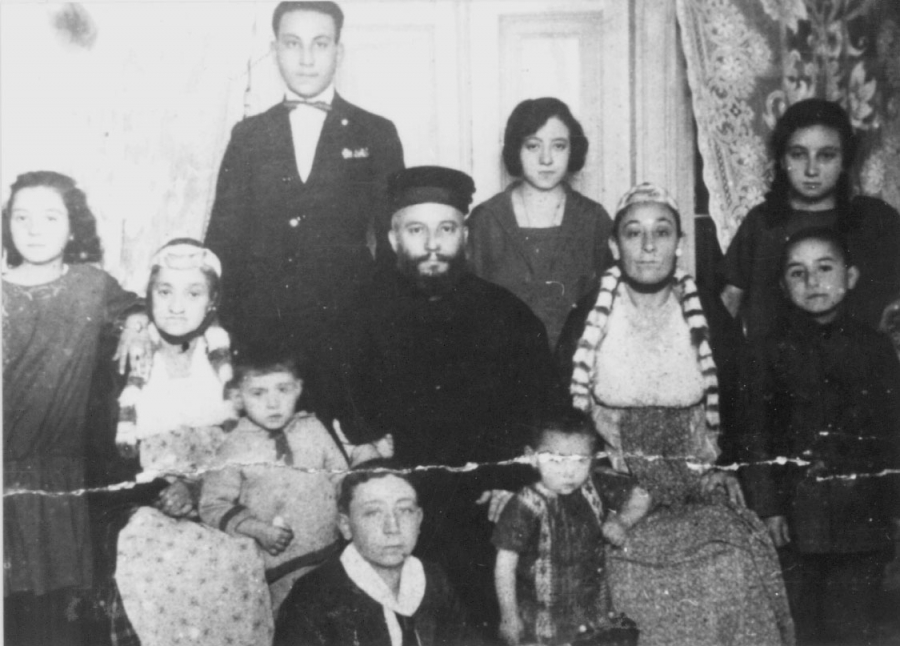 The the Naar family in Salonica, Greece, in 1924. The older women are wearing traditional Ottoman Jewish attire. The author's grandfather is the boy standing on the right. He, like his siblings, are all dressed in the European fashion. It is the only family photo from Salonica.

The only reason my family secured visas in the first place was thanks to a loophole and a congressional resolution that bypassed a Supreme Court decision. The 1924 law allowed quota exemptions for “minister[s] of any religious denomination” — my great-grandfather, a rabbi, was invited to serve a Sephardic synagogue in New Jersey.

But one week after he began his visa application, the Supreme Court ruled that ministers would be exempted alone — their wives and children would face the quotas. Fortunately for my family, Congress issued a joint resolution in support of family unification the following month that allowed my great-grandmother, grandfather and six of his siblings deemed under 18 — thanks to some doctored birthdates — to enter the US together.

My family departed a city they had called home for four centuries and arrived in the United States 95 years ago this autumn. Just before Rosh Hashanah, my great grandmother gave birth to her 10th child aboard the ship that brought the family across the Mediterranean and Atlantic to the US.

Thousands of hopeful immigrants en route to the United States from around the world when the 1924 law was passed — including eight to 10 thousand Jews — were denied entry into the country.

But many others had to jockey for the 100 coveted yearly quota slots for immigrants from Greece. A decade of war, a massive fire, population transfers, and the rise of nationalism and antisemitism propelled a third of Salonica's 80,000 Jews — like my family — to flee. Thousands of hopeful immigrants en route to the United States from around the world when the 1924 law was passed — including 8,000-10,000 Jews — were denied entry into the country. But that didn't stop everyone.

Related: During WWII, European refugees fled to Syria. Here's what the camps were like.

My great uncle decided to stow away from Greece to Turkey, then to Cuba and finally Mexico, where he crossed the US border at Fort Laredo, Texas, in 1925 — claiming to be Mexican. Thanks to the labor needs of agro-business in the American southwest, it was easier to enter the country as a Mexican than as a “Hebrew” from Greece or Turkey at that time. My great uncle’s Spanish-sounding Ladino — a Mediterranean Jewish language based on Spanish, with influences from Portuguese, Turkish, Greek, Arabic, Italian, French and Hebrew — likely helped him pull off the charade. By the time a racist backlash in the 1930s resulted in the deportation of more than a half-million Mexicans — including their American-born children — my great uncle and his family had already settled in New Jersey, far from the raids closer to the border.

But he maintained the ruse for the rest of his life. His naturalization petition in 1932, Social Security application in 1937, and registrations with the US Census Bureau identified him as Mexican. Only one official document revealed the truth: his death certificate in 1995.

Related: How amnesty gave a 100-year-old woman a new life in the US

But my family felt the tragedy of immigration exclusion, too. My grandfather’s eldest brother, Salomon, repeatedly applied for a US visa for more than a decade starting in 1929, but because of the quotas, he did not succeed. During the German occupation of Greece, Salomon, his wife Esther, and their children Shelly and Benny were rounded up by the Nazis, and, along with over 90% of Salonica’s Jews, deported to their deaths at Auschwitz-Birkenau in 1943.

Related:  The Dominican Republic took in 100,000 Jews during WWII

Echoes of my family's lost world of Salonica punctuated my youth in New Jersey — the cuisine (consumed only on special occasions), the religious practices (largely jettisoned or fused with more mainstream American Ashkenazi customs), and the now-endangered Ladino language and the cultural universe it embodied (my grandfather’s generation was the last to speak natively). The loss of those pillars of my family’s identity were the steep price for gaining entry into the middle class, whiteness, and Americanness. Key to telling that “bootstraps” version of our family story was ensuring that the real starting points — the falsified birthdates on those immigration documents and the racist policies that provoked them — were never even whispered.

Related: What I learned from my grandmother’s hands

As vulnerable as it may seem to make me — the progeny of “undesirable” immigrants who relied on a special exemption and fraudulent means to come to the US — I have the protection of my status as a second-generation American-born citizen of this country.

Many such families, whose heirs today consider themselves nothing but “Americans” who came here the “right way,” used illicit strategies to skirt draconian and racist immigration policies targeting a previous era’s “shithole countries.”

Many other Americans today have relatively recent immigrant roots in regions and communities once denigrated or targeted by immigration restrictions — Irish, Italians, Greeks, Poles, Ashkenazi and Sephardic Jews, among many others. Many such families, whose heirs today consider themselves nothing but “Americans” who came here the “right way,” used illicit strategies to skirt draconian and racist immigration policies targeting a previous era’s “shithole countries.”

By 1925 — only one year after the 1924 quota law came into effect — US Immigration services reported that 1.4 million people were residing in the country illegally. In 1929, the Registry Act provided a pathway to citizenship that hundreds of thousands of undocumented, mostly European immigrants pursued: All they had to do was demonstrate their “good moral character” (something much easier for whites to “prove”).

But most families — like mine — never uttered a word about the fraudulent means they used to enter the country. There is no telling how many tens of thousands of American stories of unauthorized immigration — including those of Jewish-Latinx immigrants today — are waiting to be told. Today's undocumented and vulnerable immigrant communities are not unique in American history — nor is the silenced heritage of many Americans themselves.

Devin E. Naar is an associate professor of history and Jewish studies and chairs the Sephardic studies program at the University of Washington in Seattle. He is the author of the award-winning “Jewish Salonica: Between the Ottoman Empire and Modern Greece” and is working on a new book about Sephardic Jews, race, and immigration in the United States.