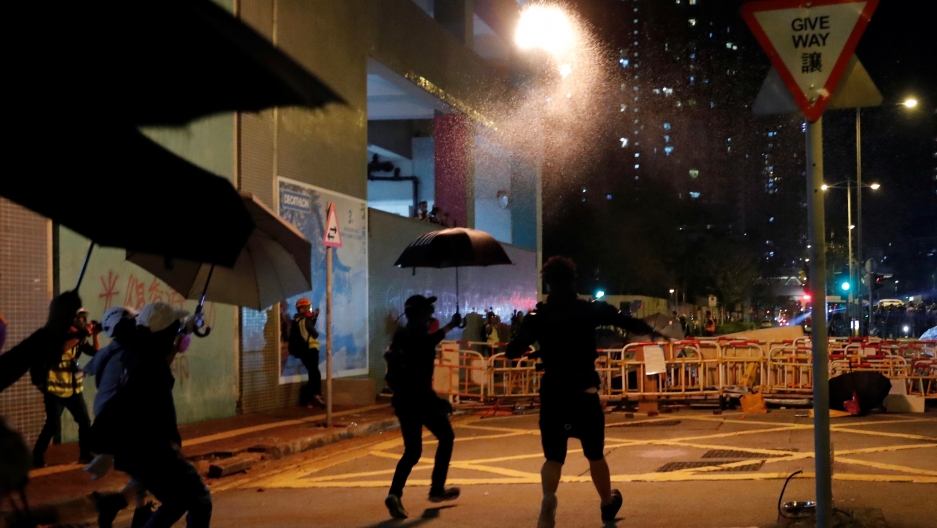 An anti-government protester throws a Molotov cocktail during a protest, following a 22-year-old university student's fall and who was critically injured last weekend in Tseung Kwan O, Hong Kong, on Nov. 6, 2019.

Chinese President Xi Jinping has a message to those hoping to wrench away any part of China from government control. First, they’ll “perish” and then “their bodies will be smashed and their bones ground to powder.”

Some will shrug this off as strongman bluster — leaders from Iran to the United States are also prone to graphic death threats — but this warning sends shivers through Hong Kong.

Belonging to China, but gifted with a more-liberal legal system, Hong Kong is in the throes of a self-proclaimed “revolution.” Its adherents say they are simply fighting for basic rights such as free speech and fair elections.

But Chinese officials call them separatists and budding “terrorists.” As one top official put it, they are “foot soldiers of external forces” (that would be America). And they’ve been warned: Your end is near.

This conjures fears of a new Tiananmen Square event, the last major uprising on Chinese soil, which was violently crushed by the People’s Liberation Army.

So, is Xi going to send in the army?

Probably not. He has an entirely different division devoted to quashing any perceived separatists and terrorists. It’s called the People’s Armed Police.

The World spoke to Joel Wuthnow with the Center for the Study of Chinese Military Affairs at the National Defense University, to better understand this massive force — and whether it will be deployed in Hong Kong.

What is the People’s Armed Police?

“Although it has ‘police’ in its name, the People’s Armed Police is a paramilitary force. Folks in the PAP wear military uniforms, have military training and use military-grade equipment.”

“Although it has ‘police’ in its name, the People’s Armed Police is a paramilitary force,” Wuthnow said. “Folks in the PAP wear military uniforms, have military training and use military-grade equipment.”

In the United States, the closest analogue would be the National Guard. The PAP is a fast-reaction force, rushing in to rescue victims of forest fires, earthquakes or typhoons. Unlike the National Guard, however, one of the PAP’s top mandates is rooting out traitors.

This has been true since the 1950s, when a predecessor to the PAP described itself as an “armed political enforcement agency … apprehending bandits or catching and suppressing reactionaries.”

In more recent times, it has been used to clamp down on minority groups — namely Tibetans and Uighurs — that chafe under Beijing’s strict commands.

How large is this force?

The exact size is tough to pinpoint, Wuthnow said. The PLA, he added, has more than 2 million troops and “our best guess is around 1 million PAP personnel scattered around China.”

The People’s Armed Police was expanded in the years following the Tiananmen uprising. That atrocity taught the Communist Party that PLA troops, trained to kill foreign invaders, are not suited for riot control.

So, what does the PAP actually do?

But in reality, you’re more likely to encounter them standing on the streets of Xinjiang, homeland of the largely Muslim Uighur minority group, where an estimated 1 million Uighurs have been shunted into “reeducation” camps.

The PAP has a “very large presence there,” Wuthnow said. “They’re out patrolling. They sit on street corners, in armed personnel carriers, holding machine guns. They’re deterring people in Xinjiang from any kind of collective action.”

Again, despite the name, this is not typical policing. “It’s a military-like organization out to maintain social control. If there were a riot, the PAP would be well-positioned to snuff that out.”

Will they be deployed in Hong Kong?

Actually, some of them are already in Hong Kong.

Hong Kong’s local government runs its own schools and courts, but national defense is the PLA’s job. The army maintains garrisons in Hong Kong and — according to a Reuters investigation — PAP troops have secretly filtered in to “spearhead any crackdown if Beijing decides to intervene.”

What’s not secret are the PAP’s massive riot suppression drills held in mainland China near the border with Hong Kong.

China’s state media has released dramatic videos of this training, which features phalanxes of PAP troops marching toward mock protesters and subduing them with clubs and shields.

“This signals Beijing’s willingness to intervene in Hong Kong. They’re more or less advertising it,” Wuthnow said. “But this is also practical training that they really need. The PAP is not used to operating in Hong Kong," he added.

Related: The masks of the Hong Kong protest (PHOTOS)

“They have no boots-on-the-ground experience there. And they’d be going up against protesters with months of experience combating and evading the Hong Kong police.”

“They have no boots-on-the-ground experience there. And they’d be going up against protesters with months of experience combating and evading the Hong Kong police.”

Moreover, the Hong Kong protesters’ feistier vanguard has become increasingly fatalistic. There may be some diehards who would almost relish going toe-to-toe with grunts from mainland China.

A popular rallying cry warns that “if we burn, you burn with us.” Even elected lawmakers from the pro-democracy wing describe the movement as a dire struggle. “We are facing the dictatorship of the Chinese Communist Party,” said district councillor Lam Chuek-ting. “If we lose, Hong Kong may become the next Xinjiang.”

So, will the PAP lead a crackdown in Hong Kong or not?

This is being hotly debated. Wuthnow doesn’t believe it is imminent. This isn’t 1989 and Hong Kong, unlike Xinjiang, is not a frontier area on military lockdown.

“If there were a PAP intervention, it would not be a high-end slaughter. It would be a light go-in, avoiding the use of lethal force.”

“If there were a PAP intervention, it would not be a high-end slaughter,” he said. “It would be a light go-in, avoiding the use of lethal force.”

Still, casualties are likely and Beijing is mindful, Wuthnow said, that “everything the PAP does will be captured on photograph, captured on video and broadcast around the world.”

Also, unlike Tiananmen, Hong Kong’s uprising is not an existential threat to the Communist Party. So, the risk-reward calculation skews against a PAP intervention for now and is likely being prepared as a contingency just in case the uprising takes a more explosive turn.

Asked for an example of such a turn, Wuthnow offered two: PLA troops somehow getting hurt or killed by protesters or the uprising spreading into mainland China.

Does Beijing have faith in Hong Kong’s police?

Hong Kong’s police have proven they can crack heads and tear gas crowds as good as any PAP regiment. In the eyes of many Hong Kongers (not only protesters), they are now seen as agents carrying out the orders of Beijing.

It also doesn’t help that Hong Kong’s police have flown to Xinjiang to study how the PAP handles “terrorists.”

Hong Kongers’ loss of faith in the police is a raging crisis; roughly half of the population now has zero trust in the police.

Probably the most striking aspect of the ongoing #HKprotests is that ppl are rapidly losing trust in the police force. 48.3% of the ppl have ZERO trust in the police now. It was 6.5% before the protests started. No wonder ppl want an independent investigation. #StandwithHK pic.twitter.com/LbKysF4i6i

This is a grim statistic. But another poll may be even more astonishing.