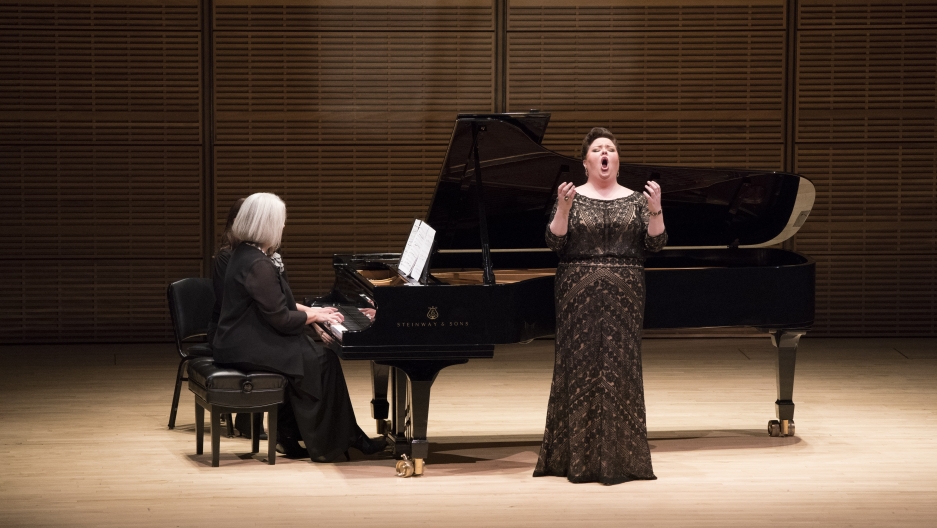 Described by Opera magazine as “a complete singer with a once-in-a-generation voice,” mezzo-soprano Jamie Barton is a rising star of the opera world.

She is currently playing Orfeo in the Metropolitan Opera’s production of Gluck’s "Orfeo ed Euridice," a performance the New York Times declared “endearing” as it praised the “sheer richness of her sound.” In September, she was the featured soloist at the Last Night of the Proms — Britain’s biggest classical music event — an occasion on which she wore a dress in the colors of bisexual pride and waved a giant rainbow flag.

The Proms wasn’t the first time Barton has brought her commitment to social justice into the concert hall. She and pianist Kathleen Kelly have put together a recital program, now on tour, that celebrates women: songs written by women, songs about women and in what Barton calls the “bent section,” a selection of love songs that were created for men to sing to women.

Barton isn’t the first woman to sing Henri Duparc’s “Phidylė” or Richard Strauss’ “Cäcilie,” but as an openly bisexual performer, she brings a different resonance to those love songs. Speaking of “Cäcilie,” which Strauss wrote as a wedding gift for his wife, she says, “I think of singing this on a wedding day to my wife [and] that puts it in a different place for me. There is a bit of queer pride, there is a bit of understanding that this story is personal to me and not necessarily just something that I'm interpreting from a page of music.”

Barton and Kelly came into the Studio 360 studio to perform three of the songs from the feminist recital tour and to talk about their collaboration, which, Kelly says, “is all about time and breath. Each piece is a collection of languages. The language of the tune, and the language of the words. If you both know the text, you can take a breath and an attitude, and a good partner can see where you’re going to go.”

Special thanks to Irene Trudel at WNYC.