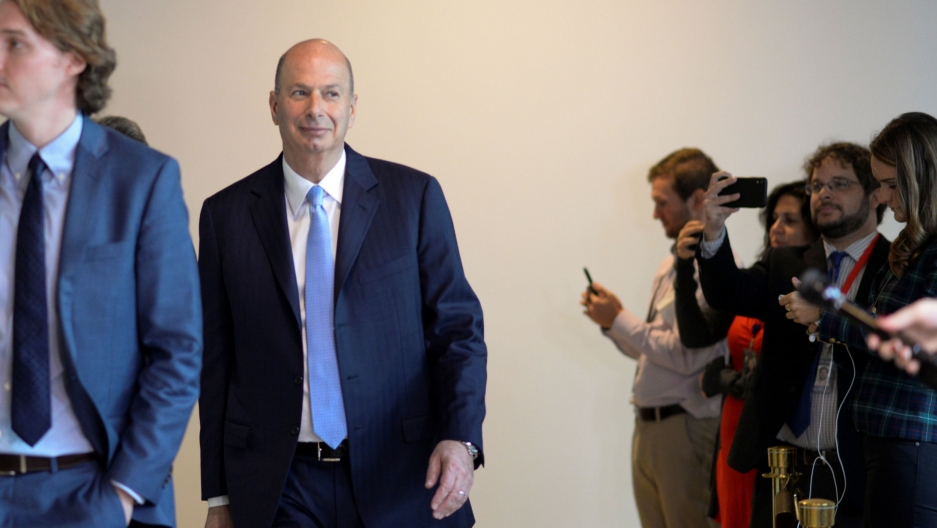 US Ambassador to the European Union Gordon Sondland arrives to review his previous testimony to the US House of Representatives impeachment inquiry into President Donald Trump led by the House Intelligence, House Foreign Affairs and House Oversight and Reform Committees on Capitol Hill in Washington, DC, Oct. 28, 2019.

House committees released transcripts of closed-door testimony from key witnesses in the impeachment inquiry this week.

On Tuesday, transcripts of more than 350 pages each from House interviews with US Ambassador to the EU, Gordon Sondland, and the Trump Administration's special envoy to Ukraine, Kurt Volker, were made public. The committees released testimony from ousted US Ambassador to Ukraine Marie Yovanovitch and senior State Department adviser Michael McKinley on Monday.

Releasing transcripts to the public is one of the steps laid out in the Oct. 31 House resolution that formalized the inquiry process.

On Monday, before the transcripts were released, Sondland submitted an additional declaration to Congress, saying that the opening statements of acting Ambassador William Taylor and Tim Morrison, top adviser for Russia and Europe on the National Security Council, had "refreshed my recollection about certain conversations."

In this Nov. 4 testimony, Sondland speaks more explicitly about a quid pro quo linking US military aid from the Trump administration and a sit-down meeting with Trump to a promise from Ukrainian President Volodymyr Zelinskiy to investigate corruption — including Burisma, the energy company for which Hunter Biden sat on the board.

"This condition had been communicated by Rudy Giuliani, with whom President Trump directed Ambassador Volker, Secretary [of Energy Rick] Perry, and me, on May 23, 2019, to discuss issues related to the President's concerns about Ukraine," Sondland affirms in his statement. "Ambassador Volker, Secretary Perry, and I understood that satisfying Mr. Giuliani was a condition for scheduling the White House visit, which we all strongly believed to be in the mutual interest of the United States and Ukraine."

Sondland writes that he still does not know "when, why, or by whom" military aid was suspended, though he believed such suspension was "ill-advised." He continues: "However, by the beginning of September 2019, and in the absence of any credible explanation for the suspension of aid, I presumed that the aid suspension had become linked to the proposed anti-corruption statement."

In his Oct. 17 testimony, Sondland said Giuliani noted that Trump "wanted Burisma and 2016 election mentioned in the statement," Sondland said. "I don't believe the Ukrainians were prepared to do that," he added.

P.J. Crowley is the former US assistant secretary of state for public affairs for President Barack Obama.

"What struck me about the deposition is that initially, he thought he was just trying to help organize a meeting between President Zelenskiy and President Trump," Crowley told The World. "But over time, he came to understand that this was a bigger challenge, that in essence, the entire relationship between Ukraine and the United States under the Trump administration hinged on getting President Zelenskiy to commit publicly, you know, to these investigations."

He says that while the testimony of ousted US Ambassador to Ukraine Marie Yovanovitch drew skepticism from Trump supporters with the suggestion that Yovanovitch was an "Obama holdover," the released testimony from Sondland and Volker will be difficult for Trump's defenders to refute.

"Gordon Sondland and Kurt Volker are both Trump appointees. They're both rock-solid Republicans. And both of them are telling us that, yeah, there was this quid pro quo," Crowley said.

Lindsey Graham, the chairman of the Senate Judiciary Committee, says he won't read any of the transcripts, and dismissed Sondland's reversal.

In his multiple statements, it is clear that Sondland was an active participant in doing the work directed by the White House, along with Perry and Volker, who referred to themselves as the "three amigos." His testimonies under oath raise questions about whether or not he could face legal trouble.

"I think most compelling to me was the direct conversations that Kurt Volker, an extraordinarily experienced American diplomat, was having directly with Rudy Giuliani, saying that, you know, these former prosecutors, their stories were not credible," Crowley said. "And yet, as we hear in a meeting that he was a part of in the Oval Office, they had a profound impact in terms of the perception of the president towards Ukraine in general and the relationship in particular."

Some Republicans have argued the White House has a fair amount of leeway to devise its foreign policy. Crowley says that's true, but that the "shadow" Ukraine agenda pushed by Giuliani was at odds with official policy.

"But as we have heard, and I think we'll get a greater understanding when we get the full testimony of the chargé at the embassy in Kyiv, William Taylor, is how this backchannel through Rudy Giuliani was pursuing a separate policy than the one endorsed throughout the government up to and including the secretary of state, Mike Pompeo," Crowley said.

It's not unusual to have a special presidential envoy to "cut through bureaucracy and try to create opportunities for breakthroughs," but testimony from both Volker and Sondland indicates that "Giuliani's involvement was actually complicating the formulation and execution of American policy toward Ukraine," Crowley added. "That's highly problematic since Ukraine is a frontline state actively resisting Russian aggression. And yet we seem to be undermining that effort with what Giuliani in particular, on behalf of the president, was trying to achieve."

Looking forward, House lawmakers are continuing to invite witnesses to testify in the investigation, including extending invitations to former National Security Adviser John Bolton and National Security Council lawyer John Eisenberg. Eisenberg did not appear for a subpoenaed deposition Monday and Bolton is unlikely to speak to investigators without a subpoena.

On Tuesday, House investigators said they would like to hear from Mick Mulvaney, the acting chief of staff from the White House. Mulvaney may have had firsthand knowledge and information directly relevant to what some investigators see as a linkage between US military aid and investigating Trump's political rivals. Mulvaney is also unlikely to appear, but Democrats say that will just add to the list of what they see as obstruction.

The White House, for its part, continues to say that it will not cooperate with this impeachment inquiry process.

Marco Werman contributed to this report.