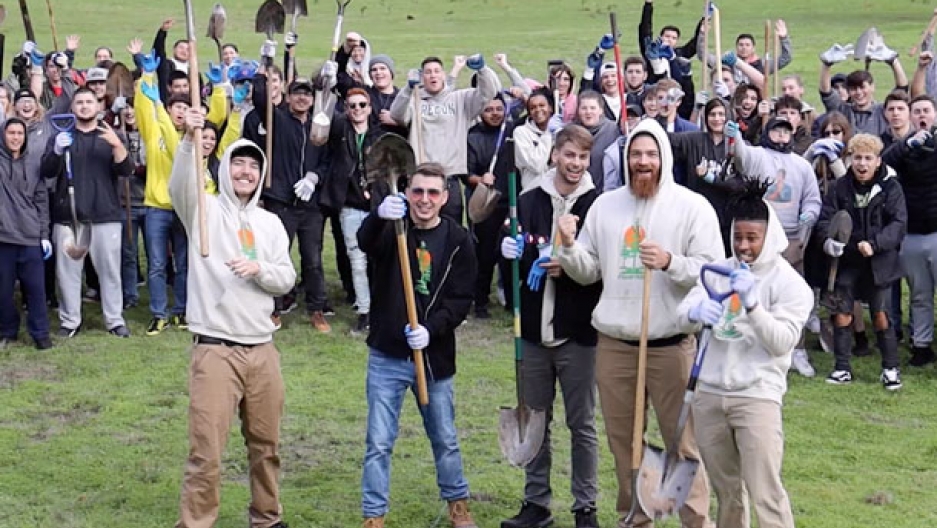 Mr. Beast, a popular YouTube "influencer," helped inspire a crew of people to plant hundreds of trees in Oregon for their #TeamTrees video.

On October 25, in what’s being called the largest YouTube collaboration of all time, hundreds of YouTubers from around the world came together and used their combined influence to send a message on the environment.

These YouTubers have a combined subscriber count of more than a billion people. One of them, Destin Sandlin, helped recruit fellow YouTube creators. Sandlin’s science education channel, Smarter Every Day, has 7.3 million subscribers and his content has amassed more than 660 million views.

“There are hundreds — literally hundreds — of creators on this list and they all have millions and millions of followers,” Sandlin says. “All these creators are coming from different places all over YouTube and the rest of the internet to work together on this one thing: We want to make an impact for good. We're calling it #TeamTrees. We're going to support the Arbor Day Foundation and try to donate $20 million. The Arbor Day Foundation has agreed that for every $1 donated to them, they will plant one tree, which is so cool.”

A popular YouTuber known as Mr. Beast created the project, Sandlin says. Mr. Beast likes to find ways to mark reaching certain levels of subscribers. When he passed 20 million subscribers, “everybody on Twitter and Reddit [was] telling him to plant 20 million trees,” Sandlin says.

Related: How did Chernobyl become a refuge for wildlife?

“And he's like, ‘How the heck am I going to do that? That's a huge task,’” Sandlin continues. “So, he decided to reach out and get help. There was a little Twitter storm that happened one particular day and everybody jumped in on it. They're like, ‘Oh my gosh, we could actually do this.’”

Sandlin and other YouTubers made a secret, private video to encourage other creators to participate. The response was overwhelmingly positive. Each YouTube creator made their own video or at least gave a shout out about the project.

Sandlin views this sort of youth-driven activism as “a straight-up line in the sand.”

We want no boundaries, no borders on this at all. It's all ‘we and us,’ and we're all planting trees, which is awesome.”

“Something needs to happen, so we're just going to do it,” he says. “We're not going to wait for policies; we’re not going to wait for anything like that. We're just going to do things because we know how, and we're able to. But that being said, it's not limited to the younger generation. This is everybody. We want no boundaries, no borders on this at all. It's all ‘we and us,’ and we're all planting trees, which is awesome.”

Sandlin’s personal video, based on experiences he had as a child, is about why certain species of trees thrive in certain regions. He focuses specifically on the longleaf pine, a type of old-growth tree that can live up to 400 years.

Sandlin says he hopes the project will help viewers realize that they have the power to make a change. “A lot of times, we think about these issues and we're like, 'Oh, that's another person's problem.’ It's not,” he insists. “It's a problem [that affects] all of us. So, if we can come together and literally do something, it's an empowering message.”

As a YouTube “influencer,” Sandlin understands the incredible reach his platform has. Many young people aspire to the fame or money that being an “influencer” brings, he says.

Related: Converting forests into palm oil plantations is 'total devastation' for the planet

“I think that can be dangerous because you're kind of turning the attention on yourself,” he says. “So, I think a kind of secondary message that's being told here is it's about more than just you yourself. It's about everybody together. We're all in this together.”

“This is going to be the largest collaboration on YouTube ever in the world,” he notes. “It doesn't matter how many subscribers the channel has. The important thing is looking outward beyond yourself and trying to do good for others.”