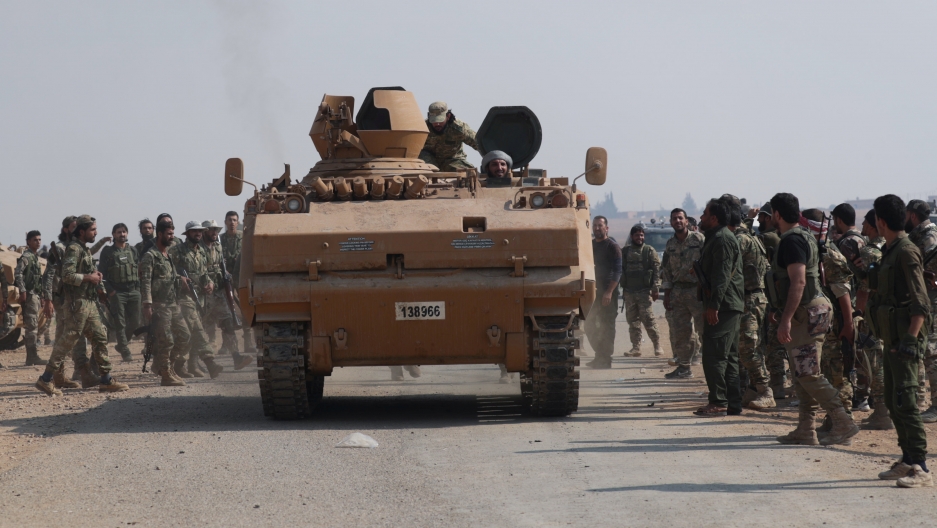 As American troops withdraw from the Syrian-Turkish border, the fighting in the region continues — mainly between Kurdish soldiers and Syrian militias backed by Turkey.

Most international humanitarian groups have left, but Free Burma Rangers is one of the few that remains. The NGO's aid workers drive ambulances and provide medical care to the front lines.

On Sunday, one of the Free Burma Rangers, Zhao Seng, was killed and another was injured in an apparent shelling by a Turkish-backed Syrian group. David Eubank, who heads the group, spoke to our host Marco Werman about the loss of his friend and colleague.

Related: An American family is helping those left behind in Syria as ISIS withdraws

Marco Werman: Tell us what happened to one of your Burmese volunteers, a man named Zhao Seng?

David Eubank: We heard that there were three wounded Kurdish soldiers that were holding off the onslaught, and we moved up to get them and found other soldiers fleeing because the attack was too heavy with armor. We just drove quickly through the fire and got behind a building, and we could see where the three wounded were, and the Kurds ran out to grab them. I drove my ambulance up to get them. And Zhao said, "Tank, tank," and it opened up six times and missed. We got all the wounded in our vehicle, and they shot us with machine guns and RPGs, and they kept missing us. Zhao filmed the whole thing. That was the day before yesterday.

Then yesterday, we were further back at a casualty collection point we set up. We had taken care of two wounded from mortar strikes, and Zhao was working on that video from the day before that we wanted to send out to show the fighting and show the rescue. He was working in the vehicle, which we have — a couple of armored ambulances. He's working on it. We got done, and he sat down outside the vehicle behind the wheel — well, with his back towards the enemy, with a vehicle protecting him in a relatively safe place. I got in the vehicle with his laptop to transfer those files so I could send out the next report and that's when a drone or a mortar round landed seven yards from us and killed Zhao instantly. Mohammed, who was wounded six times next to me in the battle of Mosul and recovered, was also wounded. He has about 30 small fragments in him but he's okay. Our vehicle was heavily damaged but could move. So we evacuated Zhao, but he was dead at the moment. The Kurds knew he was dead in the hospital, but out of their respect for us and out of their love, they gave him CPR, oxygen, adrenaline, electric shock, and everything long after he was dead. That really touched me that they kept trying, and I was praying for a miracle.

I gather that he was kind of an uncle to your kids back in Burma. How did you meet Zhao?

Yes, he was an uncle. In fact, when I called my oldest daughter, who's now 19 and has known Zhao since she was three, she just let out this big scream, "No, no, no." He raised my kids, and they love him. He's always laughing and always joking and just a funny guy. And his relationship to me was — I said, "OK. It's dangerous, but we have to go help these people and we've got to do this. No one has to go." He looks at me and says, "Where are you going?" I said, "I'm going." He goes, "I'll go with you." That's how he was.

Can you help us understand why he traveled halfway around the world to follow you and your NGO to help those injured on the Syrian-Turkish border? Why?

He said, "Because people have helped me in our struggle for freedom. I want to give back." You know, Burma's had 70 years of civil war. These people have been under attack constantly. He said, "I want to help people, and I know how to do it. I'm not only an okay medic, but I can shoot photos and tell a story." I believe that this story is the most powerful weapon we can have to put a light on real human beings in real trouble. I want to motivate people to help them. First, it was the Yazidis trapped on Sinjar mountain. We were up there together. Then it was the battle of Mosul; we followed the whole thing and then a lot of the filming. Then it was the situation of ISIS here in Syria. He just felt, "I've been given a lot. I'm going to go." The only time he slowed down was when he got married last year, and he waited until his child was born and he joined us again.

I have to ask you this, Dave. It's kind of a tough question, but does Zhao's death give you pause about your own efforts to follow your own courageous path with others beside you?

Oh, yeah, I feel totally responsible. I brought him here. I brought him everywhere. He trusts me, and we were in a dangerous area. The people that killed them were the Turks and their proxies, the Free Syrian Army, that's sure. The people that allowed it to happen was our government, that's sure. But I'm the one who brought them in to help people. So, I feel that responsibility, and I feel a deep sorrow. I wish I could change it. Of course, it's dangerous. It's very dangerous for them. We've lost some. They've lost thousands.

Are you seeing or hearing anything about US troops close to where you are?

Well, we saw them drive away, which was a horrible feeling. And I'm sure they feel terrible. One day we went to do a rescue at a hospital, and we went towards it and the irony was watching the Americans go away from us when we needed their help and watching their attack-helicopter gunships fly support over their convoys as they left, as we went pretty much naked in to go help people in a really bad place.