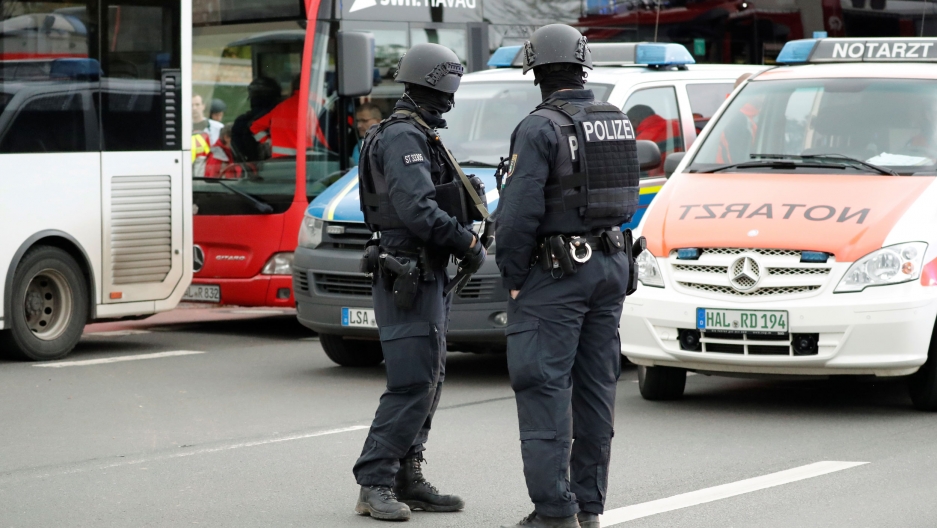 Police officers stand guard near the site of a shooting, in which two people were killed, in Halle, Germany Oct. 9, 2019.

Ethnically and racially driven terrorism rose alarmingly in 2018 both worldwide and in the United States, and groups have often mimicked the tactics of armed Islamist militants to radicalize and recruit people, the US State Department said on Friday.

"Similar to Islamist terrorism, this breed of terrorism is inspired by hateful, supremacist and intolerant ideology," Nathan Sales, the State Department's counterterrorism coordinator, told a briefing, adding that the 2018 attack by a gunman who killed 11 people at a synagogue in Pittsburgh was an example of the rising trend.

Related: Baghdadi’s death is a huge blow to ISIS, but history suggests it won’t guarantee a safer world

"Make no mistake we will confront all forms of terrorism no matter what ideology inspires it," Sales said.

He added that white supremacist and other racially motivated terror organizations were copying strategies from armed Islamist groups.

Mass shootings that killed dozens of people this year in the United States have fueled a long-running debate over gun control.

Related: People get angry when you say white Americans are terrorists, too

US President Donald Trump said after the shooting that Americans “must condemn racism, bigotry and white supremacy” and blamed the internet and violent video games for fostering violence, but some Democrats and El Paso residents said Trump's own rhetoric about an immigrant “invasion” had contributed to racial division.

Asked if any neo-Nazi or white supremacist groups inside the United States had been identified as terrorist organizations, Sales said State Department deferred to the FBI and Department of Homeland Security when it comes to combating domestic terrorism threats.

But he added that the State Department was working with technology companies to develop positive narratives against hateful messages and international partners to mobilize action against these networks.