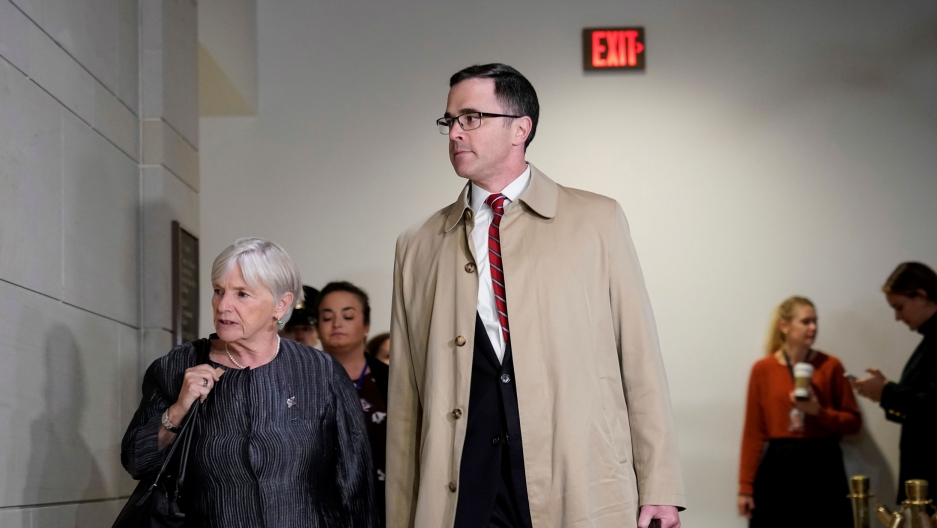 Timothy Morrison, special assistant to the president and senior director for Europe and Russia at the National Security Council, arrives for a closed-door deposition as part of the impeachment inquiry into US President Donald Trump led by the House Intelligence, House Foreign Affairs and House Oversight and Reform Committees on Capitol Hill in Washington, DC, Oct. 31, 2019.

The US House of Representatives voted Thursday to proceed with the formal impeachment inquiry of President Donald Trump, entering a new phase of the impeachment process.

But in lower levels of the Capitol building, investigators were hearing testimony from Tim Morrison, the top adviser on Russia and Europe in Trump's National Security Council. On Wednesday, NPR reported that Morrison also plans to leave his post on the NSC.

In his Thursday appearance, Morrison reinforced much of what other officials have testified — that President Trump threatened to withhold aid money to Ukraine until it agreed to investigate the Biden family.

"Morrison certainly sounds as though he was concerned with the policy at play," said former Pentagon speechwriter John Gans.

Gans also sees some irony in Morrison testifying. He says Morrison is known as a hawk on Russia and is a protégé of former National Security Adviser John Bolton.

"He's so hawkish that when he joined the NSC, everybody sort of wondered if he would start a war, and instead he's leaving with a story to tell that I think a lot of people in the so-called resistance, and certainly those who are working on the Democratic-led inquiry into the Ukraine scandal, are hoping will be helpful to their cause," Gans said. "I think that is probably wishful thinking."

Bolton has also been asked to appear by House Democrats, although his lawyer said he will not appear voluntarily.

"But one of the things that John Bolton and, to some extent Tim Morrison, are known for is their belief that the president sets the course, and this impeachment hearing is shaping up to be at least a fight over Congress's ability to hold presidents account for foreign policy decisions," Gans added. "It will remain to be seen how helpful he is, and, to a degree, whether he is a harbinger for John Bolton getting involved as well."

Gans, also the author of "White House Warriors: How the National Security Council Transformed the American Way of War," spoke with the World's Carol Hills about the irregularities of White House staffers testifying.

Carol Hills: The House Intelligence Committee issued a subpoena this morning for Morrison's testimony. The White House directed him not to appear. Did he want to testify?

John Gans: I haven't spoken to him about it, so it's hard to say. My hunch is that I don't think anybody wants to be a part of this more than they have to be. Most of these staffers like Tim Morrison and most of those who served on the staff — and I wrote a book on 70 years of the staff from Harry Truman to President Trump — most of them don't really seek the spotlight. They don't want to really end up in the newspaper. They're there to serve the president. They're there to serve the nation's interests.

This is a testament to how irregular things have gotten, that people like Tim Morrison are the subject of interviews like this or walking up to Congress to testify. National security staffers aren't supposed to testify to Congress. They're not supposed to go to the Hill and open up about what the president was deciding. That is the tradition, and to a degree, that's by design so the president has the staff that he needs to do his job.

Now, you've been talking about how the NSC works. What's different about this bureaucracy that might make it tricky to ever get to the bottom of just what went on in terms of a possible Ukraine quid pro quo?

Absolutely. Well, the reason it will be difficult to get to the bottom of it is twofold. One, it does seem as though this was done outside of the regular channels. So how many notes were kept? Who had a bigger role? Rudy Giuliani or, you know, whoever these outsiders who were involved? So there's a piece of it that's just irregular. The other piece of it is that the NSC staff is considered staff to the president, as part of that, as part of the White House, the executive office of the president. And that is generally shielded from Congressional inquiry by executive privilege.

Generally speaking, these staffers are not expected to testify. They're not really allowed to testify. The national security adviser is a very powerful position, but is not confirmed by the US Senate. And that is a status that has been accepted by Republicans and Democrats and is probably one of the reasons John Bolton got the job.

What you end up in [in that] situation is that getting to the staff and getting to know what the staff thinks is very difficult to do. I worked very hard to do it, to write a book about them. And so, typically speaking, they would never talk to Congress about what the president said and what he did behind the scenes, because that's shielded as part of staff work and executive privilege. The White House has struggled to assert executive privilege in this situation, in part because they released the testimony of the Ukraine call themselves, but also because it seems as though it was so irregular and so upsetting to people that people are willing to stand up and defy the president, as it's clear Tim Morrison is doing today with his decision to testify.