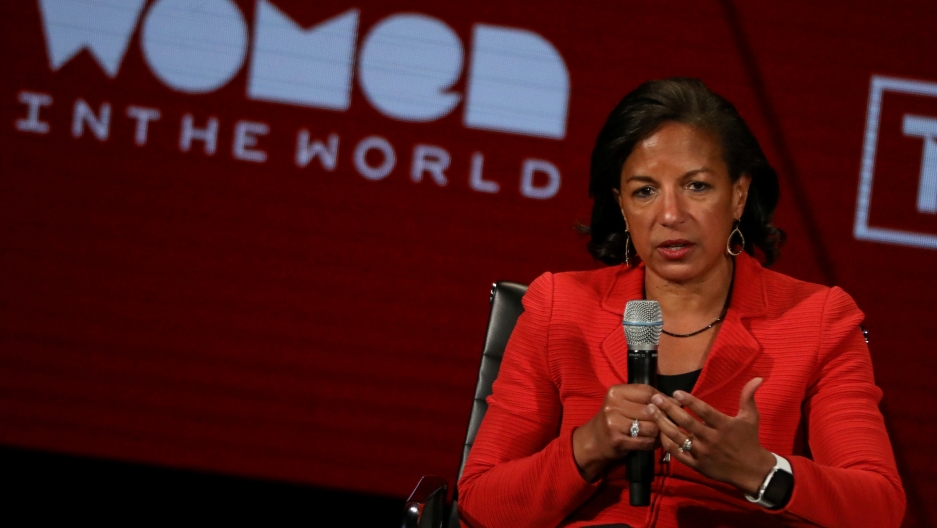 Susan Rice, former national security adviser and US ambassador to the UN, speaks onstage at the Women In The World Summit in New York, April 11, 2019.

The US House of Representatives voted Thursday to proceed with formal impeachment proceedings against President Donald Trump. The Democratic push for the proceedings has been driven by the testimonies of national security officials.

Susan Rice was the US national security adviser during President Barack Obama’s second term and the US ambassador to the United Nations during his first administration.

She also just published a new memoir called, "Tough Love: My Story of the Things Worth Fighting For," about her experience on the front lines of American diplomacy. Rice spoke to The World's Carol Hills about her book — and the Trump impeachment inquiry.

Carol Hills: We’ll spend most of this interview talking about your memoir, but a few questions in the news first. The House voted Thursday on procedures governing its impeachment inquiry. Impeachment is taking up a lot of oxygen on Capitol Hill.

Susan Rice: It’s an extraordinary circumstance, unlike any other we've had in our history, where we may face articles of impeachment drawn up to rebuke the conduct of a president in foreign policy, where it appears with mounting evidence that the president has abused the office by trying to extort negative information, false and negative information, on his perceived political opponent, Joe Biden, from a foreign government by holding back military assistance. It was badly needed.

The extraordinary thing about this, Carol, is it rather than working to advance US national security interests, as any president of both parties in previous administrations would be doing, he seems to be utilizing the office to advance his personal political interests. And that's what's so striking.

Another topic that gets a lot of discussion is Vice President Joe Biden's son, Hunter Biden. He was working for a Ukrainian gas company, Burisma. In 2014, he was serving on their board. And that was around the same time his father, Joe Biden, was playing a key role in relations with Ukraine for the Obama White House. That raises some questions about the appropriate role of family members in government. Would you have stood by if one of your adult children — let's pretend they're adults and out there — wanted to do the same thing?

Well, I don't want to speak in hypotheticals, but I think Hunter Biden has said that in retrospect, he wishes he had done differently. Having said that, I can tell you that Joe Biden's role was purely in service of US policy on behalf of President Obama. He was not doing business to serve his son or his own personal interests, in contrast to what we've seen, apparently with President Trump, he would support —

The optics of it are pretty strong, I think. But nevertheless, Hunter Biden wouldn't have been asked to be on the board if his father hadn't been Joe Biden.

Well, I don't know the circumstances of why he was asked to be on the board and why he accepted. I do know that it was perfectly public and transparent at the time. There was nothing obscured about it, and the questions were asked and answered in that moment. But I also think that it's fair to acknowledge Hunter's own statements in retrospect.

But the important issue here is whether or not that US policy was compromised to serve a personal interest. There is absolutely no evidence of that. And I can state, as somebody who was involved in the policymaking at that point, that what Vice President Biden was doing was pursuing the United States,' Western countries' and the international financial institutions' anti-corruption agenda.

I want to shift gears to your memoir, "Tough Love." After reading it. I feel like it could just as easily have been called, "Don't Take Any Crap From Anyone," something your father used to tell you.

What impact did your father's advice have on you?

Well, my father was an extraordinary man. He was born in segregated South Carolina, around 1920, faced the harshest form of Jim Crow, and served at Tuskegee during World War II with the Tuskegee Airmen at a time when it was believed that blacks couldn't effectively fight or fly. He served in this segregated military, as some will recall, when the mission was to fight for the freedom of everybody in this country and around the world, except for African Americans.

And so my father, who was an extraordinary patriot and served in our government at the highest levels, ultimately as a governor of the Federal Reserve, also was quite affected by the experience of serving in a segregated military and the message that it sent about how this country viewed people like him and like me. And he had several sayings, one of which was, "If my being black is going to be a problem, it's going to be a problem for somebody else, not for me." In other words, I'm not going to allow other people's bigotry, which is borne of insecurity, become my own insecurity. And in the same vein, he taught me and my brother, often, don't take crap off of anybody. If anybody's trying to discount you or dismiss you or cause you to doubt yourself, you push back.

Ambassador Rice, you talk in detail in your book about the 2012 Benghazi attacks, when you appeared on multiple Sunday shows — against your mother's advice — to say that the evidence at hand suggested the attacks weren't preplanned, but were a spontaneous response.

What our assessment is as of the present is, in fact, it began spontaneously in Benghazi as a reaction to what had transpired some hours earlier in Cairo.

That, of course, came back to haunt you. Sen. Lindsey Graham, Republican of South Carolina, in 2012, said he thought you shouldn't be promoted to secretary of state.  Did the public drubbing that you received — it went on for months — about Benghazi, did that turn you for a time into a liability for the Obama administration?

Carol, I don't think so, or the president wouldn't have named me national security adviser subsequently. I think it's important for people to remember that, in the first instance, the information that I provided on those Sunday shows was drafted by the intelligence community, approved by the intelligence community as our best current understanding of what had happened. There was no effort to mislead, to lie or to falsify it. And eight congressional investigations that looked into this subsequently validated that. So, Sen. Graham was among the most vociferous, and I would think disingenuous, of those who attacked me. But the fact of the matter is, I provided the information, that was what we had at the time. And had I altered it or sought to inject my own judgment, that would have been a reason to question my competence and my trustworthiness. But the fact is, it did, in the hothouse of a political campaign in a political season, result in my being pilloried personally for many, many months — arguably years. And it, I think, says more in retrospect about those who were attacking me than about the information and the motivations of those who, like me, were trying to provide the information we had to the American people.

Related: Analysis: Trump's reversal in Syria was a play to keep his base intact

What do you think is the most urgent foreign policy issue facing the US right now?

The threats we face externally are rather constant and not substantially changed. What has changed in recent years is that, rather than the United States serving as a force for predictability and stability in the world, trying, for the most part, to advance our interests in cooperation with others and do so in a fashion that is not just serving the United States, but serving a larger interest, we have leadership that is radically unpredictable and unstable and bearing no affiliation to the truth, undermining our alliances, elevating and lauding our adversaries and dictators.

And we have sort of upended rational perceptions of what the United States is and what we stand for. And as a consequence, we are exporting instability and unpredictability. And when you add that to these constant threats and challenges, it's quite a toxic mix. That's how you get these impulsive decisions to withdraw personnel from northern Syria and throw our alliance with the Kurds away. That's how you get the Taliban invited to Camp David on the eve of 9/11. And it's how you get planes in the air 10 minutes from bombing Iran and then called off. The system and the process has broken down, and it is broken down in deference to an erratic, unpredictable and, I think, increasingly dangerous president.