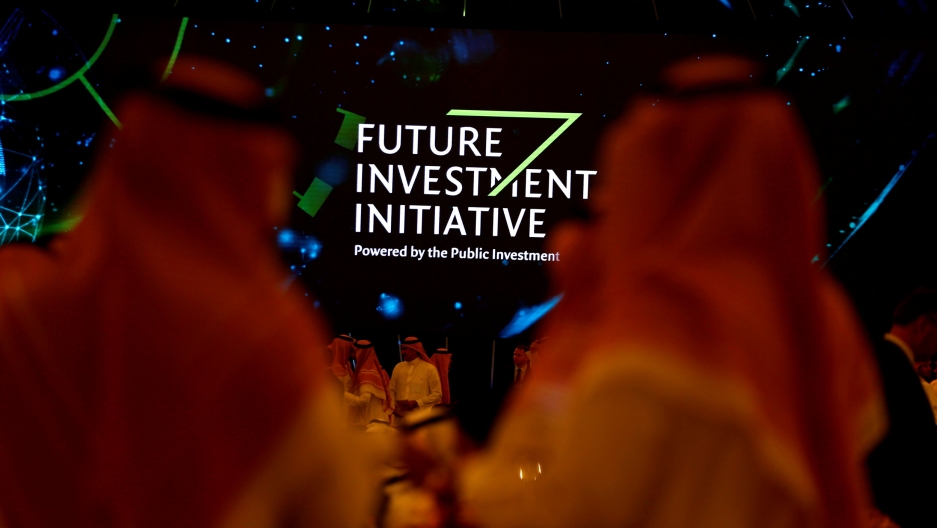 Participants look at a sign of the Future Investment Initiative during the investment conference in Riyadh, Saudi Arabia, on Oct. 23, 2018.

Bankers, politicians and CEOs from around the world are set to flock to an annual Saudi Arabian business meeting this week, in part rehabilitating an event that was blackballed last year after the murder of Saudi journalist Jamal Khashoggi.

In 2018, United States Treasury Secretary Steven Mnuchin and Jared Kushner, a White House adviser and President Donald Trump’s son-in-law, stayed away from the gathering in the capital, Riyadh. This year, as the Khashoggi scandal fades, they lead a sizable US delegation.

A grander list of attendees marks a win for the Future Investment Initiative (FII), known unofficially as “Davos in the Desert,” but notable stay-aways underscore how the lingering controversy makes the Saudi leadership toxic for many onlookers. 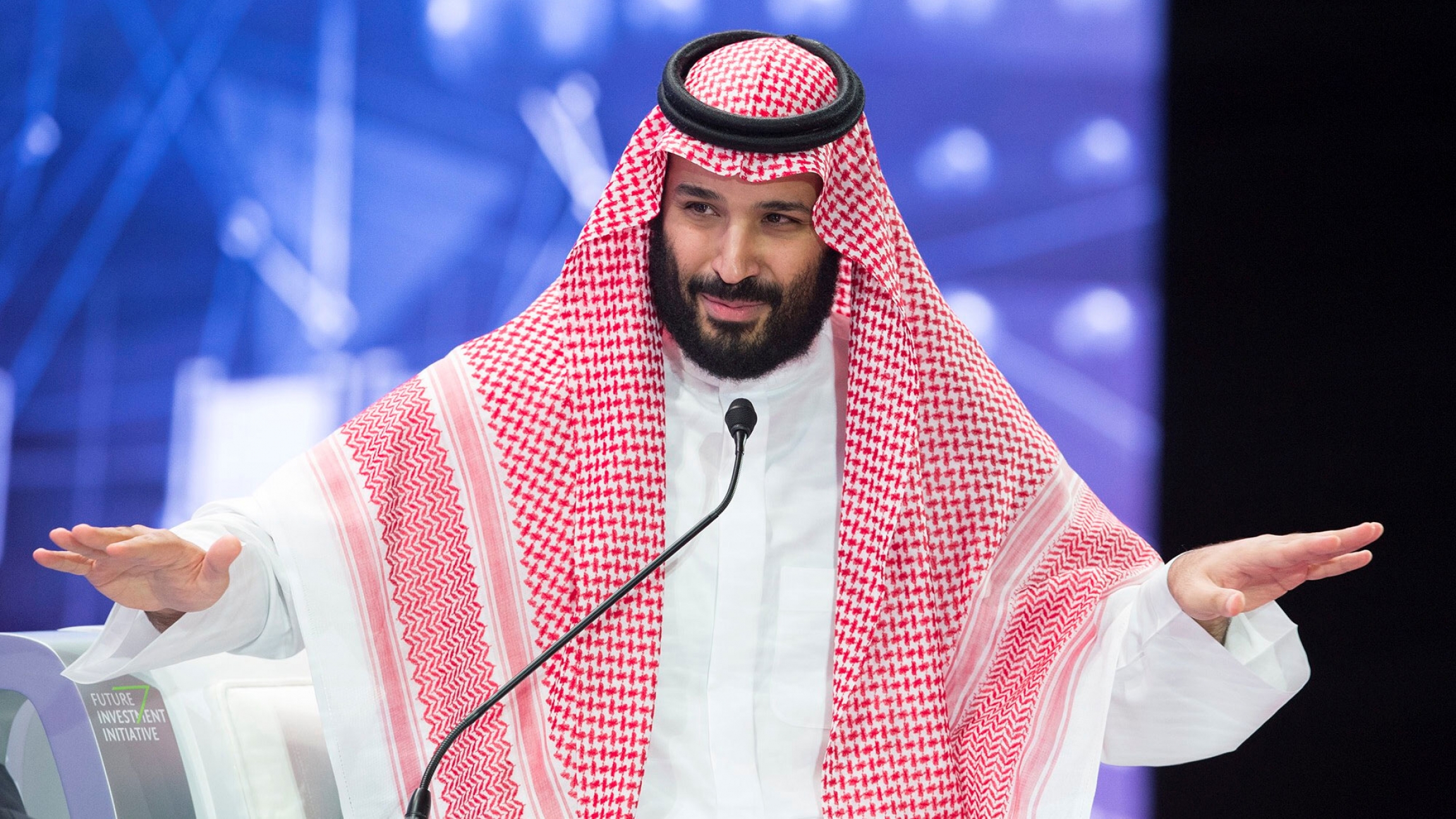 “The shine of FII has worn off — whether this is due more to the Khashoggi incident or to greater familiarity with the realities of Saudi Arabia isn’t clear. In all likelihood, both are factors,” said Ellen Wald, author of “Saudi, Inc.,” who is set to attend the meeting.

“The shock of the controversy has died down, but the realities of what Saudi Arabia is —  compared to the image it presented for the inaugural event in 2017 — are now clear, and attendance at FII reflects that.”

Last year, FII was held only weeks after a Saudi hit squad killed and dismembered Khashoggi, a royal-insider-turned-critic, in the Saudi consulate in Istanbul on Oct. 2. According to the CIA, Salman, better known as MBS, ordered the assassination, though Saudi officials deny this.

It remains unclear exactly who will fly to Riyadh this week, but a leaked provisional speakers’ list indicates that Wall Street dealmakers will attend FII in force, while more public-facing technology and media firms are more cautious about returning.

According to the tentative program, obtained by Axios, Kushner and Mnuchin will be joined by energy secretary Rick Perry. Other politicians include Brazil’s President Jair Bolsonaro and India’s Prime Minister Narendra Modi, who seeks energy deals with the kingdom, the world’s top oil exporter.

The CEOs of Citigroup, HSBC and Credit Suisse, as well as the heads of fund managers Blackstone and BlackRock, are set to join the glitzy investment shindig. SoftBank founder and CEO Masayoshi Son is also expected, as he seeks cash for a new technology fund.

The big draw for financiers is the long-awaited stock market listing of state-run energy giant Saudi Aramco, for which MBS seeks a $2 trillion valuation. Still, the stop-start listing process has frustrated many, and it remains unclear when, where and how the flotation will take place.

Other FII attendees include David Malpass, president of the World Bank; Trump‘s pugnacious ex-communications chief Anthony Scaramucci; and, for reasons not yet wholly clear, rapper and Black Eyed Peas founding member will.i.am on a panel about artificial intelligence.

Silicon Valley technology firms are notable by their absence. The draft program has no mention of Facebook, Google, Apple, or Microsoft. The same goes for US media firms, none of which are officially partnering with FII. Bloomberg journalists were set to take part in FII, but pulled out in recent weeks.

“European politicians and tech companies are keeping their distance, but the Trump administration, China and the world’s populists and authoritarians can return. ... MBS is halfway in from the cold, but not completely.”

“European politicians and tech companies are keeping their distance, but the Trump administration, China and the world’s populists and authoritarians can return,” Eckart Woertz, director of the Hamburg-based GIGA Institute of Middle East Studies, told The World. “MBS is halfway in from the cold, but not completely.”

Still, the presence of Modi and executives from state-backed Chinese firms in Saudi, the birthplace of Islam, should “raise eyebrows”, added Woertz, given the government crackdowns on the Muslim populations of India and China.

At the first FII in 2017, young prince MBS touted Saudi as a dynamic country that was diversifying its oil-dependent economy, sidelining stuffy religious clerics, improving women’s rights and creating jobs for a bulging population of young Saudis.

But to human rights campaigners like Freedom Forward executive director Sunjeev Bery, that is just spin for a regime that killed Khashoggi, jailed other dissidents and bombs civilians in neighboring Yemen, where a Saudi-led coalition seeks to restore a toppled government.

“The ‘Davos for Dictators’ agenda is a case study in mass hypocrisy."

“The ‘Davos for Dictators’ agenda is a case study in mass hypocrisy,” said Bery, who launched an online petition to dissuade Kushner and other Trump administration bigwigs from attending FII.

“There are event panels on food security, women in the workplace, and global sustainability. Meanwhile, the Saudi dictatorship starves Yemeni civilians, jails women’s rights activists and Saudi Aramco is the largest contributor to fossil fuel emissions on the planet.”

According to public relations experts, CEOs must strike a delicate balance between the opportunities available in Saudi’s $782 billion economy and the reputational damage they will suffer from Western consumers still chafing over Khashoggi’s grisly death.

Ronn Torossian, CEO of 5WPR, a New York-based public relations firm, outlined a “tricky calculation” for Wall Street executives who should not stray too far away from the “values of the majority of America consumers.”

“The 24-hour news cycle means that something is big news for a day or two before being replaced by the next media attraction — and that includes the murder of a prominent journalist,” Torossian said. “The reality is that there is strength in numbers. If one prominent company chooses to attend, others will take this to mean they can also attend without being criticized and join the ranks.”

Once in Riyadh, however, Charlie Pownall, a UK-based reputation and communications adviser, said executives should avoid “being publicly linked” to those behind Khashoggi’s murder, which could yet be probed by an international court.

“I would advise visiting CEOs to focus on building relationships and deal-making, and to keep the media at arm’s length,” Pownall said. “On-the-record commentary can easily be used against them in today’s febrile geopolitical environment, or may come back to haunt them at a later date.”

An earlier version of this story reported that Bloomberg journalists were planning to moderate panels. They've pulled out and the story has been updated to reflect that.