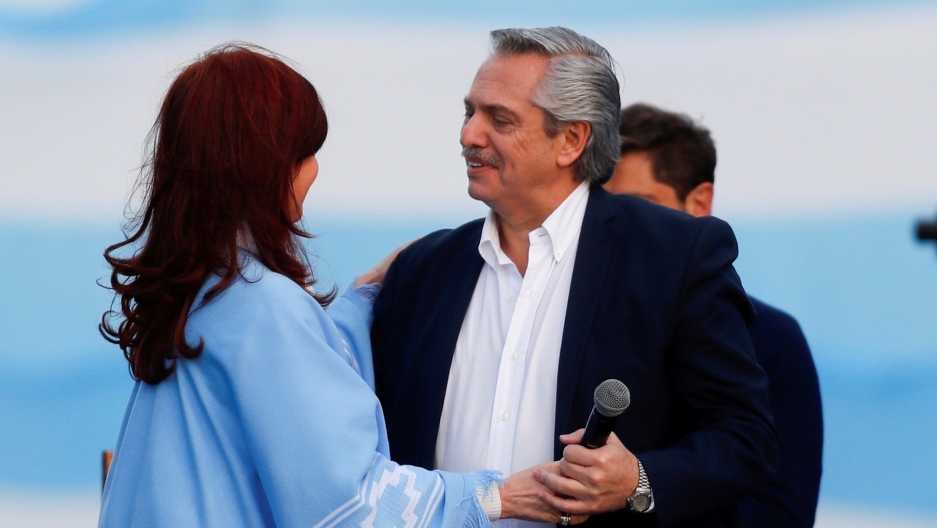 But in this Sunday's presidential election, he's switching to Alberto Fernández, who, according to the polls, is winning over hundreds of thousands of Argentines.

Spinelli, like many other Argentines, is troubled by the unrest that has swept across the region in recent weeks, and fears his own country could experience the same kind of turmoil. Thirty-five percent of Argentines are currently living in poverty, according to government statistics.

“People are hungry, businesses are closing everywhere, and inflation is shooting up.”

“People are hungry, businesses are closing everywhere, and inflation is shooting up,” said Spinelli. “I believed in the change [that Macri promised], but in the end, he just ended up governing for his rich friends.”

It’s concerns like his that have led many Argentines to throw their support around Fernández, a low-profile, but widely respected moderate and a Peronist. The fractious, populist movement, Peronism, has dominated Argentina off and on since the 1940s, and in more recent years has become known for corruption and internal splintering.

But the country’s current struggles have brought about a comeback for Peronists.

Possibly the highest-profile Peronist in the current political scene is former President Cristina Kirchner, who left office in 2015 and whose hand-picked successor lost the election. Kirchner is beloved by some for her welfare and human rights initiatives, but loathed by others for running up Argentina’s budget deficit and implication in corruption scandals.

“If I had to make a football metaphor, I would say Cristina is Diego Maradona,” said Argentine journalist Martín Schapiro, referencing the soccer great. “People just love Maradona or they deeply dislike Maradona, but there are no grays when you speak about Maradona with someone in Argentina.”

Argentines have long wondered if Kirchner would run for president again. This year, in what’s been called a political masterstroke, she shelved those ambitions to run for vice president alongside Fernández.

Similarly, Fernández has been likened to another Argentine soccer player, midfielder Javier Mascherano. Schapiro explained that in the 2014 World Cup, Argentina’s most successful in 20 years, “Mascherano was, arguably, the most important player of the team. [Lionel] Messi was the brilliant one. But Javier Mascherano was the one who organized the team, the one who acted like a manager inside the field, and his silent work, his silent contribution was even more important.”

Spinelli, the taxi driver, thinks Fernández is a “very smart, capable guy.” But he says his vote is not only based on Fernández's background, but also his approach to one of the biggest challenges facing Argentina — a loan Macri obtained from the International Monetary Fund, a familiar villain in Argentine history whose structural adjustment packages have often been followed by economic decline. “The fund is a vulture,” he said.

The IMF, aware of its reputation in developing countries, has begun to temper some of the requirements for spending cuts it imposes on loan recipients. But the $57 billion Argentina obtained last year to shore up its economy broke that pattern, in part because Donald Trump urged the fund to fast-track funding for Macri’s budget gap, according to economist Leandro Ottone of the Germán Abdala Foundation.

“This could only be explained because of the relationship between Trump and Mauricio Macri,” he said.

The loan disbursed money unusually fast and came with austerity requirements that did not allow Argentina’s economy to get back to growth, said Ottone. The economy is now predicted to shrink more than 3% this year, according to the IMF’s own projection.

Many Argentines blame Macri for the situation, and polls and mandatory primary elections that serve as a dress rehearsal for the vote predict Fernández will win Sunday’s vote by as much as 15 points, the threshold for avoiding a runoff.

Observers say the bigger drama will come afterward. Argentina has bills due next year to the IMF and private creditors of over $50 billion — money it doesn't have.

President Macri long argued that his business background would attract investors to Argentina. As the current crisis deepened, many Argentines scrambled to get a better grasp of complex economic policy, according to economics journalist Estefanía Pozzo. She is part of a project called Datazo that posts short videos about the economy on Instagram.

“If you repeat and repeat and repeat the terms of the financial market and don’t understand what it really means, it’s difficult to question it,” she said. In addition to clarity, the team says humor is a powerful tool — “it’s better to say something funny and right than to just look at the camera and say, ‘Oh, that’s really bad.’”

Pozzo says the likely Peronist victory is a mandate to demand a different relationship with international creditors. Best case, Argentina can relax its austerity and have more time to repay. Worst case, the country could plunge into social unrest — like some of its South American neighbors are experiencing now.

As the election neared, Macri held rallies across the country arguing that his pro-business approach remained the best governance style for moving Argentina forward. Many still agree — his coalition is projected to control around 40% of Congress.

“The legacy of Macri’s government is transparency and the fight against corruption.”

“The legacy of Macri’s government is transparency and the fight against corruption,” said university student Maria Victoria Moreira, 19, at a recent rally.

Other voters remain exasperated both with Macri and the Peronists. “I think they all rob,” said convenience store cashier Gastón Galeano, 23, who says he will not vote for Macri again, but beyond that is undecided.

Though the Peronists have united groups from unions to student activists to governors in conservative rural Argentina for Sunday’s election, that alliance will soon be tested in the talks to renegotiate Argentina's debt, said Pozzo. “Some actors are going to lose — the question is, who?”

The name the Peronists chose for their coalition in the election, the Front for Everyone, at least signals a commitment to negotiate on the side of “the Argentine majorities — the working class,” said Ottone, the economist.

If they truly govern that way, it would hark back to the movement’s founding more than 70 years ago.