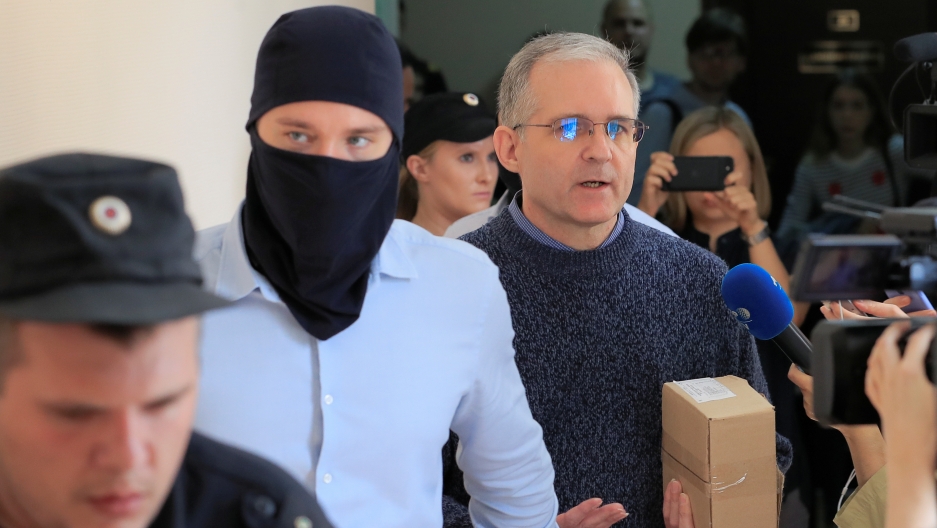 Former US Marine Paul Whelan, who was detained and accused of espionage, is escorted inside a court building in Moscow, Aug. 23, 2019.

Paul Whelan is still in a Russian prison. He's an American citizen accused of espionage. The former US Marine was arrested late last year in Russia.

The House of Representatives passed a bill this week calling on Russia to either offer up "legitimate evidence" of wrongdoing against Paul Whelan or release him.

Paul Whelan's alleged crime: He had a USB stick in his pocket that contained top state secrets from the Kremlin. Where did that flash drive come from? Whelan believes he was set up by a Russian friend he'd known for 10 years who also happens to work for the Russian intelligence agency, FSB.

Related: Learn how to be a spy from previously unpublished KGB training manuals

According to the family's website about his ordeal, Paul Whelan worked in global security after completing his service in Iraq and traveled frequently around the world. He visited Russia six times in 10 years and was in Moscow to attend a friend's wedding when he was detained.

Representative Eliot Engel, chairman of the House Foreign Affairs Committee, emphasized that Paul Whelan is being held without a trial or any evidence of his alleged crime, has been denied his rights and continues to suffer and has been deprived of medical attention.

Engel said, "We cannot accept this current situation to go on any longer. ... Mr. Whelan languishing in a cell with no understanding of why he’s being subjected to this horror. ... Sadly, this injustice is what life is like in Putin’s Russia."

Related: Most leaders are in jail, but Russia's opposition plans more protests

Marco Werman: Have you been in touch with your brother?

David Whelan: Not directly. We haven't spoken; nobody in the family has spoken with Paul since he was arrested back in December of 2018. Our communication, for the most part, goes through the consular visits. We get occasional notes back and forth through his lawyers, one of whom speaks English, and we send and receive letters. And the turnaround time seems to be about two to three months for him to get them and two to three months for them to come back.

What is the latest you can share with us about his case?

We're really in a holding pattern. The case hasn't changed very much from day one, which is that he goes through a cycle of two to three month detention periods. The detention periods are renewed. There was apparently an investigation. We don't know what they investigated or what the evidence was that came out of that. An indictment came up in September. We're now waiting until the trial is called. But there's no real information about what happened, what the evidence is, what the charges are. Paul's lawyer says that the evidence that they claim to have doesn't support the charges. The FSB obviously thinks that they have a case. So, we're just waiting to see what the next step is with the trial.

We're really in a holding pattern. The case hasn't changed very much from day one...

What kind of support have you had from the US government on this?

It's been exceptional with the Moscow embassy and the people at the consulate, the consular staff who go and visit Paul. They do things like buy him food because the prisoners in Russian prisons are expected to supplement the food provided by the prison. And they communicate with us regularly on a weekly basis. We have a conference call with staff from Moscow. So, that's been great.

From the State Department side in Washington, and from the other agencies that we've been trying to work with, it's been less supportive, in that we have done most of the work ourselves in trying to find the people who we can work with. There's been very little outreach from any of the Washington agencies, and so that's been a little bit more difficult.

So, let's talk about what actually happened. The flash drive that Paul was handed, he thinks he was set up by a friend in Russia. Why would a friend do that?

It's a good question. This friend, his name is Ilya Yatsenko, he's an FSB officer, and he's in law enforcement. Paul and he have known each other for 10 years. So, he's been back and forth to Russia to see Ilya over the years. And I think he had no idea that he would ever be put in this position by someone he trusted.

But this friend, he's in Russia's domestic secret service. Why is your brother friends with an agent of the FSB?

The FSB, as I understand it, is equivalent to the FBI. So, although we do know that it's the successor to the KGB, and that obviously comes with a lot of bugaboos, I guess even I wasn't expecting that the FSB would be entrapping American tourists. It just never occurred to me. I expected them to be sort of the federal police. And so, I guess I don't see his friendship with an FSB officer being any different than people who have friendships with FBI officers. I mean, it just seems about the same sort of thing.

From Russia's perspective, Paul was a spy who spent years cultivating confidential sources in Russia, and he was active on Russia's version of Facebook, Vkontakte, and traveled there a lot. So, what do you see in those details?

Well, I see a very narrow perspective, which is that Paul traveled to Russia about six times in 10 years. He traveled to many other countries during that same time, probably as many times to countries like England. So, I mean, you can obviously draw a story out along those lines. But to suggest that that was all of his life, that his whole focus was on developing Russian contacts because he was on VK [Vkontakte], I just think it's a very narrow view, and obviously, it plays into the Russian story that he is a spy. And unfortunately, I think the Western media amplified that.

As much as you do not believe the Russians charges against your brother, is it fair to say that there are some things you might not know about Paul's life?

Absolutely. I'm not my brother's keeper, even though he's my twin. And in fact, there might even have been plausible charges that the Russians could have come up with. I don't know. You know, maybe he'd been in a traffic accident or something. But I think that the fact that it's espionage is just such balderdash. It's just incredibly fictional.

This interview has been condensed and lightly edited for clarity.