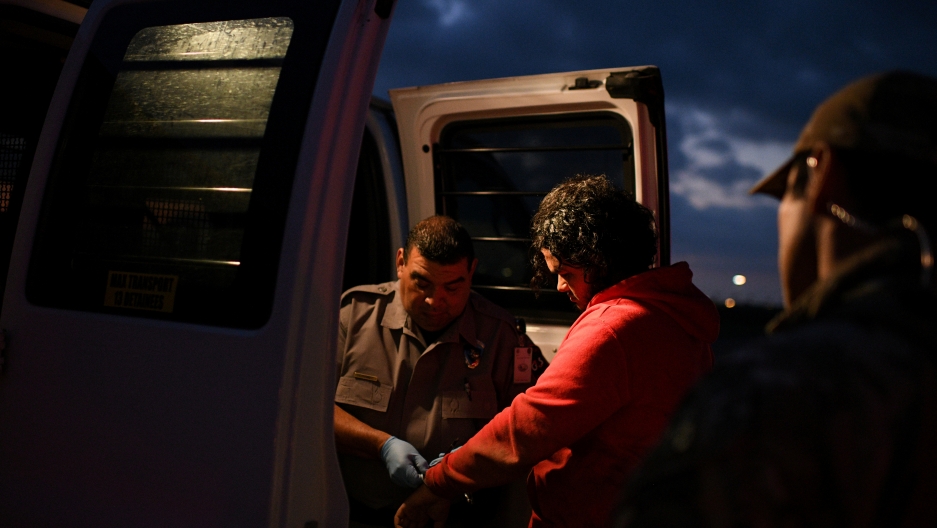 Undocumented migrants are escorted into a transport van after being apprehended by US Border Patrol agents following an illegal crossing of the Rio Grande in Mission, Texas, on Oct. 8, 2019.

Migrants crossing the border into the US may soon need a new form of identification: a DNA sample.

That's if the Trump administration gets its way. The Justice Department published the proposal this week, opening up a 20-day period for public comments. The stated aim is to create a database of asylum-seekers and migrants that will help federal officials fight crime. Those who enter the country legally, including legal permanent residents, will not be affected.

Alex Nowrasteh is the director of immigration studies at the Cato Institute, a libertarian think tank. He spoke to The World's host Marco Werman about how the DNA data will be collected and where it will go.

Marco Werman: Alex, how exactly will this work?

Alex Nowrasteh: So it's DNA data. It's going to be taken through mouth swabs and it's going to be entered into the CODIS system, which is the FBI's national database of DNA that is used by every law enforcement agency in the United States to basically try to solve crimes. It will also be used by the Department of Homeland Security to check whether family units apprehended at the border — mothers, fathers and their children — are related to each other.

How does the Trump administration think this will affect the flow of migrants coming to the US? And is that the stated goal?

So the stated goal, two ways, is to, one, try to solve crimes in the United States, which I think is greatly exaggerated here. Illegal immigrants are much less likely to commit crimes than native-born Americans. But the second one is to make sure that asylum-seekers and others crossing the border are not smuggling in folks who they claim are their family members, but who actually aren't. The purpose for both of these is tried to disincentivize folks coming to the US border, as is the case for almost every Trump action along the border.

So let me take both of those one by one. I'll start with the second one. How often does that happen that people try and kind of sneak non-relations across the border making those claims?

We don't really know. This is something that's difficult to measure, but it's likely very rare. There are definitely cases of smugglers bringing up people who they claim are their family members. And it turns out that they're not. But these are relatively rare situations. These are relatively rare cases where that is going on, where people sort of put on this basically lie about family relations. That happens, of course. But it's not super common. It's not very common. But it definitely does sometimes occur. So that is true, that that happens. But it's a much smaller problem than the administration makes it out.

And to the first goal of this proposal — the Trump administration says the DNA collection will lead to more crimes solved. Where does that notion come from?

So it comes from the idea that DNA evidence is a great way to solve a lot of crimes. There's a lot of research on this in the United States. It's quite efficient. The problem is, that's not really applicable to this situation along the border. These are folks who are at the border who are not accused of committing a crime, oftentimes not convicted of committing a crime. So adding their DNA to a massive government database is probably just a waste of time.

So, essentially, that goal incorrectly suggests that migrants are inherently more prone to be criminals?

It does incorrectly suggest that. And it also incorrectly suggests that gathering the DNA of a population with lower crime rates, who have not even individually been accused of committing a crime, is somehow going to solve a lot of crimes that remain unsolved in the United States. There's simply no evidence of that. It's a big diversion of government resources from legitimate and efficient crime-fighting efforts toward basically trying to take random swabs of random people and hoping that somehow that will solve crimes.

We've seen a pretty steady chipping away at legal immigration by the Trump White House, for example, having to prove you have health insurance and it won't be a burden on government resources. Is this DNA scheme just another way to make immigration really prohibitive? Where does it all stop?

This is just another way for the administration to make it more expensive and more humiliating, frankly, for people to try to come to this country lawfully. The Trump administration tried to cut legal immigration through Congress. They failed to convince Congress to do that. So they've been changing rules and regulations across the board to try to achieve that goal. The number of immigrants is down in the United States, but not nearly down as far as they want. I suspect that this administration will use every single regulatory trick up its sleeves to try to cut legal immigration before it's done here.