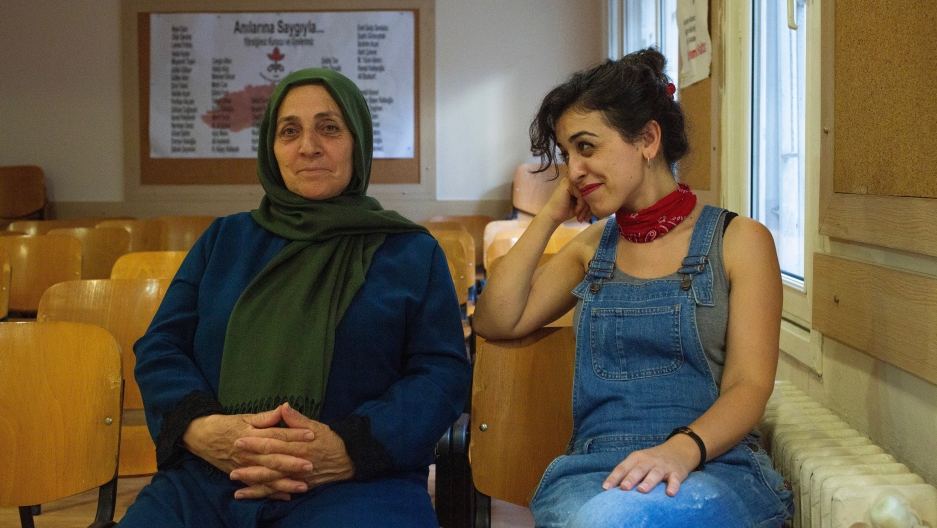 Hanım Tosun, 53, and her daughter Jiyan Tosun, 34, are continuing their fight for Saturday Mothers.

Hanim Tosun feels at home at the Istanbul office of the Human Rights Association, also known as the IHD, its acronym in Turkish. It was here that she and a group of Kurdish women launched the first Saturday Mothers vigil 24 years ago.

The Saturday Mothers is one of the longest-running peaceful protest movements in the world. On Saturdays since 1995, the women would gather in Istanbul's Galatasaray Square, a popular pedestrian shopping area, to demand the whereabouts of their sons, fathers and husbands who disappeared after Turkey's 1980 military coup. Their protest was inspired in part by the Argentine women in white who demanded to know the fates of loved ones who disappeared during their country's dictatorship.

Today, Turkey's Saturday Mothers continue to meet in Istanbul — at the IHD office. And while many of the founding protesters are growing frail, their daughters are taking the reins. Some men have joined the movement, as well.

Hanim Tosun’s husband, Fehmi Tosun, was among hundreds of Kurds who disappeared in the ’80s and ’90s, when Turkey’s conflict with its minority Kurdish population was at its height. Anyone who sympathized with Kurdish separatists could be targeted.

In the wake of another war Turkey is now waging against the Kurdish region of Syria, many Kurds fear that more of their loved ones will be kidnapped by militias and authoritarian regimes.

US troops are crossing into Iraq as part of a broader withdrawal from Syria ordered by President Donald Trump, a decision that allowed Turkey to launch an offensive against the Syrian Democratic Forces, which for years was a US ally battling ISIS. (SDF is a leftist Syrian Kurdish militia considered terrorists by Turkey.)

Turkey agreed to pause its offensive for five days under a deal with Washington. The truce expires late on Tuesday, just after Turkish President Recep Tayyip Erdoğan is set to discuss next steps in the region at a meeting in Russia with President Vladimir Putin.

The last time Hanim Tosun saw Fehmi Tosun was October 1995. She was upstairs in their Istanbul apartment when the yelling started. It was around 7 p.m., and a group of men were taking him away.

“He was shouting a lot. He tried not to get in the [men’s] car, but they forced him to get in the car ... they were dragging him in. While I was trying to go downstairs, I yelled, ‘Get that car's license plate,’” she said.

Her daughter, Jiyan Tosun, who was 9 years old at the time, heard her father scream. “[He shouted,] ‘They’re going to catch me. They’re going to kill me,’” Jiyan Tosun said. “I ran downstairs. My brother ran up to the car, but my father told him to let go because they might do the same to him.”

“We didn't understand that it was undercover policemen at first.”

“We didn't understand that it was undercover policemen at first,” who took her husband away, Hanim Tosun said.

Fehmi Tosun is among at least 1,300 Kurds who have disappeared in Turkey’s conflict with its minority Kurdish population since 1935, according to Maside Ocak, a researcher with Turkey's Human Rights Association. Only 200 bodies of Kurds who've been killed have been identified, she said.

Her own brother, Hasan Ocak, is among the dead — his body was identified by a Turkish soldier — while a local journalist found bones from two teenage Kurdish boys in a cave in 2016.

At 53, Hanim Tosun is one of the youngest of the Saturday Mothers. Many of them are in their 80s and 90s now, and some have died without getting answers. The Turkish government banned them from meeting for 10 years, from 1999 to 2009.

In recent years, Turkey has been cracking down on dissent by women. In March, police tear-gassed and stopped the International Women’s Day protest in Istanbul after 17 years of allowing it.

Successive Turkish governments have targeted and harassed the Saturday Mothers. But the current government, led by the AK Party, generally left them alone.

Until August 2018. On the 700th vigil, police swooped in with tear gas. They arrested dozens of protesters, including one of the pioneering Saturday Mothers, 83-year-old Emine Ocak, who is Maside Ocak’s mother. An image of Emine Ocak in 1997 alongside a photo of her last year being detained by police went viral on Turkish social media.

Since then, the government has banned the Saturday Mothers from gathering at Galatasaray.

“The world heard about our struggle from Galatasaray. We want to return there. It’s like a sacred ground, for us.”

“The world heard about our struggle from Galatasaray. We want to return there. It’s like a sacred ground, for us,” Hanim Tosun said.

Turkish officials say they blocked the vigils because the Kurdish militia group, the PKK, was using them as propaganda on social media. The Saturday Mothers say they have no connection to the PKK.

Amnesty International is advocating for the government to allow the group back to the square.

“It’s a place of historic importance. It’s a place of peaceful protest, not just for the Saturday Mothers actually, but sit-ins [and] small-scale protests over the years have taken place there,” said Milena Buyum, a campaigner for Amnesty. “Now, it’s encircled by iron barriers, and there’s a permanent police presence there discouraging and stopping anybody else. And this is a really big problem. The public space is being banned for people.”

For now, the Saturday Mothers have moved their sit-in to the human rights office.

Jiyan Tosun is 34 now, and when her mom can’t make it to the Saturday sit-in, she often steps in. She’s studying to become a lawyer, she said, because she wants to fight in court, as well as the street.

“Until the disappeared are found and the perpetrators are tried, our demands will remain the same. This has been my mother’s struggle since we were kids.”

“Until the disappeared are found and the perpetrators are tried, our demands will remain the same," she said. "This has been my mother’s struggle since we were kids. Every week, my mother was going to the demonstration on Saturday … If we didn’t go with her, we were waiting in front of the TV, to see how much she would be beaten that week,” said Jiyan Tosun.

At one Saturday protest earlier this year, Jiyan Tosun was stationed in front of the human rights office. About 150 people gathered for the vigil, carrying red carnations and photos. Nearby, about a dozen police officers in riot gear stood on alert.

“I’m angry because the reason we’re here is the government … They are just standing in front of us and actually preventing us from finding our relatives,” she said. 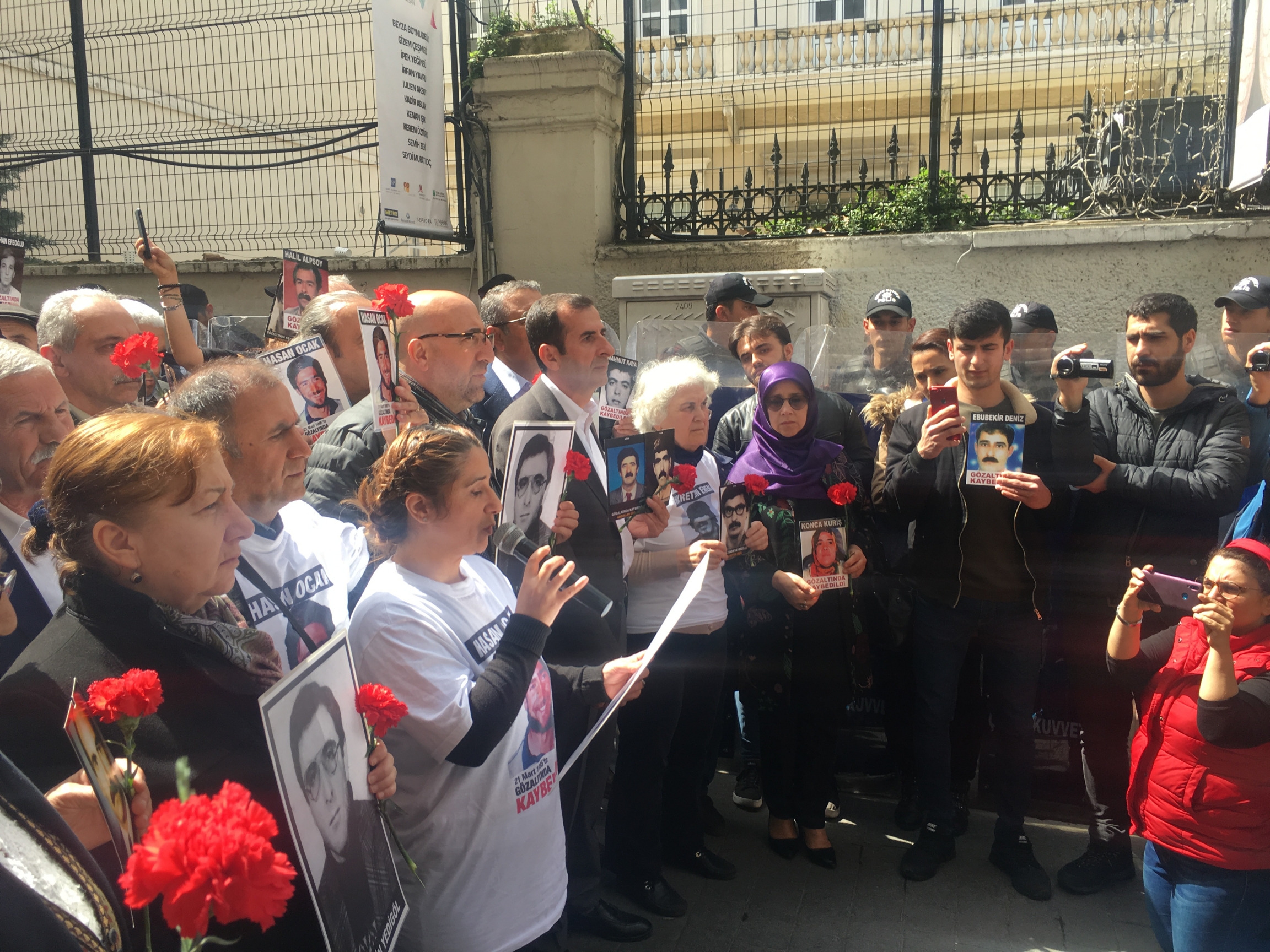 Saturday Mothers meets every Saturday to demand the whereabouts of their missing husbands, fathers and sons.

But Hanim Tosun says she doesn’t go as often as she used to.

She said it’s painful to keep retelling her husband’s story. “When I was getting arrested, there was a lot of violence: kicking, slapping, tear gas, batons. But in jail, they didn’t touch us. One time, they put us in solitary confinement,” said Hanim Tosun, who has been arrested numerous times over the years.

And she doesn’t like to discuss the details in front of her kids.

“The hardest thing for me has been hiding the pain from my kids and enduring it in silence when I’m with them.”

“The hardest thing for me has been hiding the pain from my kids and enduring it in silence when I’m with them,” Hanim Tosun said.

But she said that despite the pain, she will continue her activism. It’s still important for the world to hear them, so more people don’t disappear like her husband did.

She and the Saturday Mothers have gotten recognition and support for their struggle. The Irish band U2 recognized Fehmi Tosun in their 1997 album, “Pop,” and the Tosun family met the band members after an Istanbul concert in 2010.

“Our government doesn’t hear our voice. Somewhere far away, they hear us," Hanim Tosun said. "Our struggle is not in vain. I’m happy to see that."