Several Chilean cities were engulfed by days of riots, along with peaceful protests, after a hike in public transport costs. Chile government extended a state of emergency to cities in its north and south, President Sebastián Piñera said late on Sunday, after at least seven people were killed amid violent clashes and arson attacks.

"We are at war against a powerful enemy, who is willing to use violence without any limits," Piñera said in a late-night televised statement at army headquarters in Santiago. 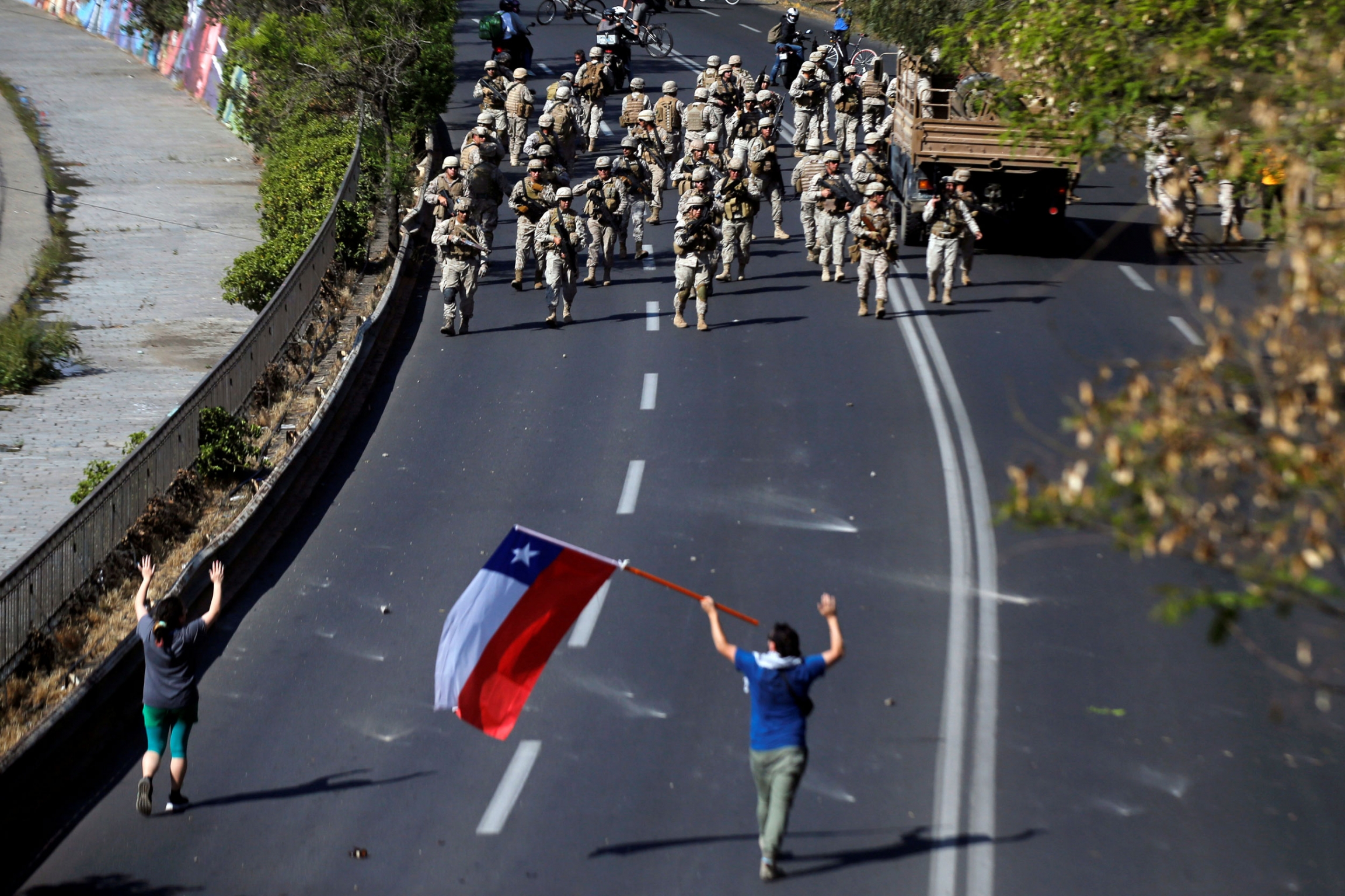 Chilean soldiers gather near demonstrators,  during a protests in Santiago, Chile, Oct. 20, 2019.

He confirmed the state of emergency he declared for Santiago on Saturday night, which brought the military onto the streets for the first time since the military dictatorship of Gen. Augusto Pinochet ended in 1990, would be extended to the north and south of the capital.

The state of emergency ordered by rwing Chilean pres is mandated by constitution created under 17 yr-long US-supported Pinochet dictatorship (1973-1990). Army is now patrolling the streets in scenes reminiscent of Chile’s dark past. https://t.co/Ab9T7ddvUF pic.twitter.com/to6olXVMhM 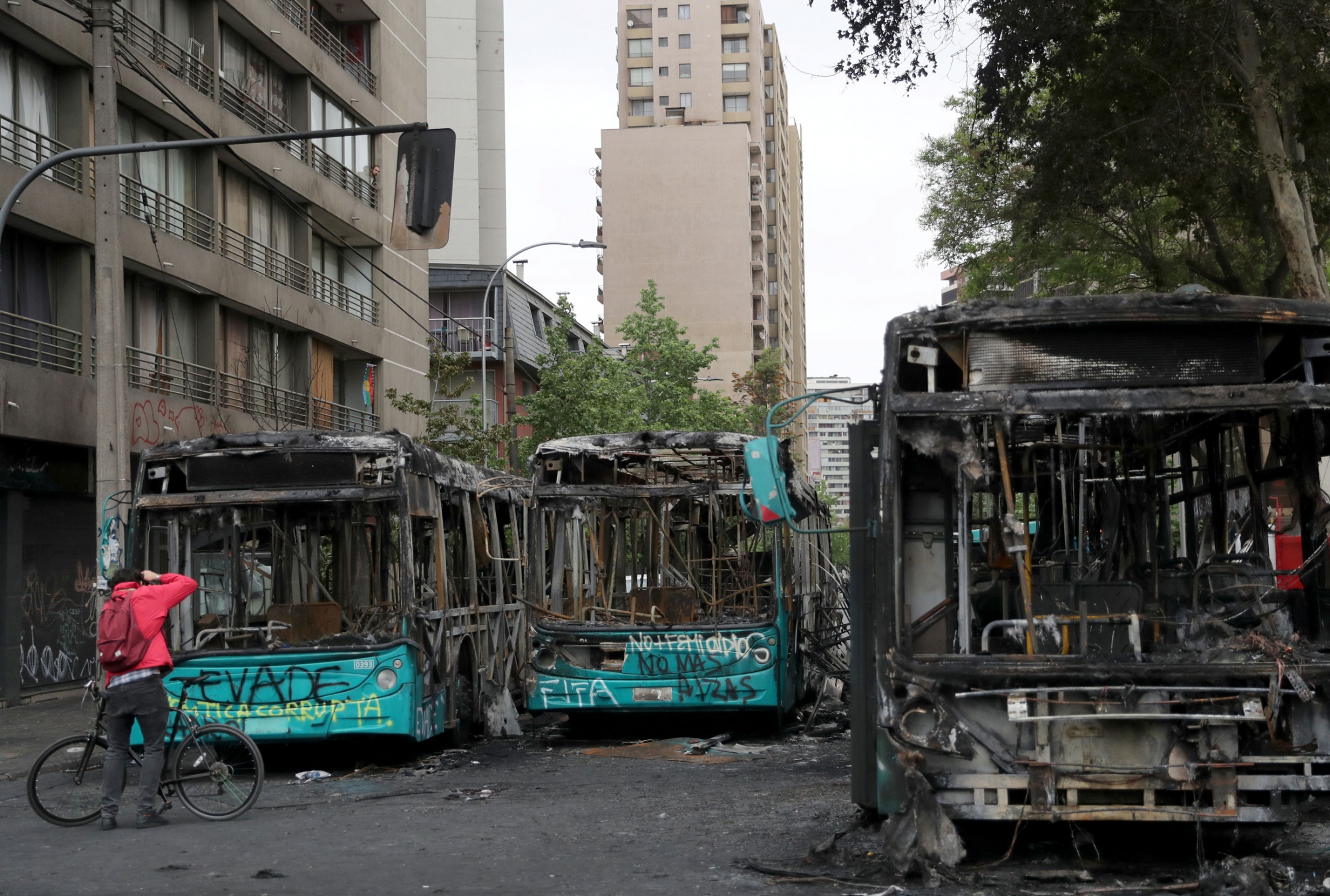 A man takes photos of burned buses, which were destroyed duirng a previous day's protest in Santiago, Chile, Oct. 20, 2019.

While Piñera said Saturday he would suspend a subway fare increase, that appears to have done little to satisfy crowds.

Piñera said Santiago's metro and bus system would operate a partial service on Monday, along with hospitals and some schools and crèches, and appealed for Chileans to band together and help their neighbors to get on with their lives and remain safe. 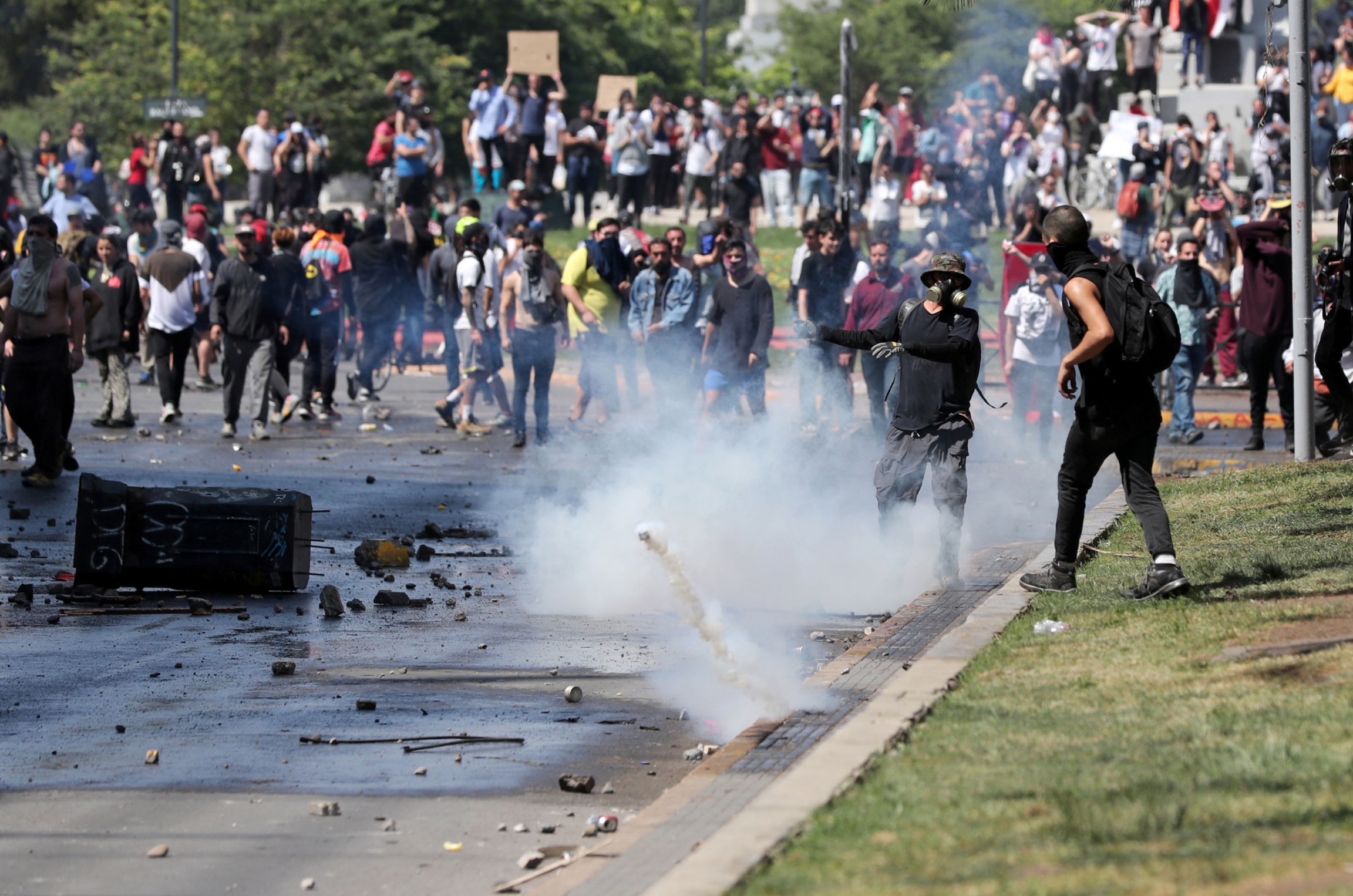 Demonstrators deflect a tear gas canister during a protest in Santiago, Chile, Oct. 20, 2019.

"Tomorrow we will have a difficult day," he said. "We are very aware that (the perpetrators of riots) have a degree of organization, logistics, typical of a criminal organization," he said. "Today is not the time for ambiguities. I call on all my compatriots to unite in this battle against violence and delinquency." 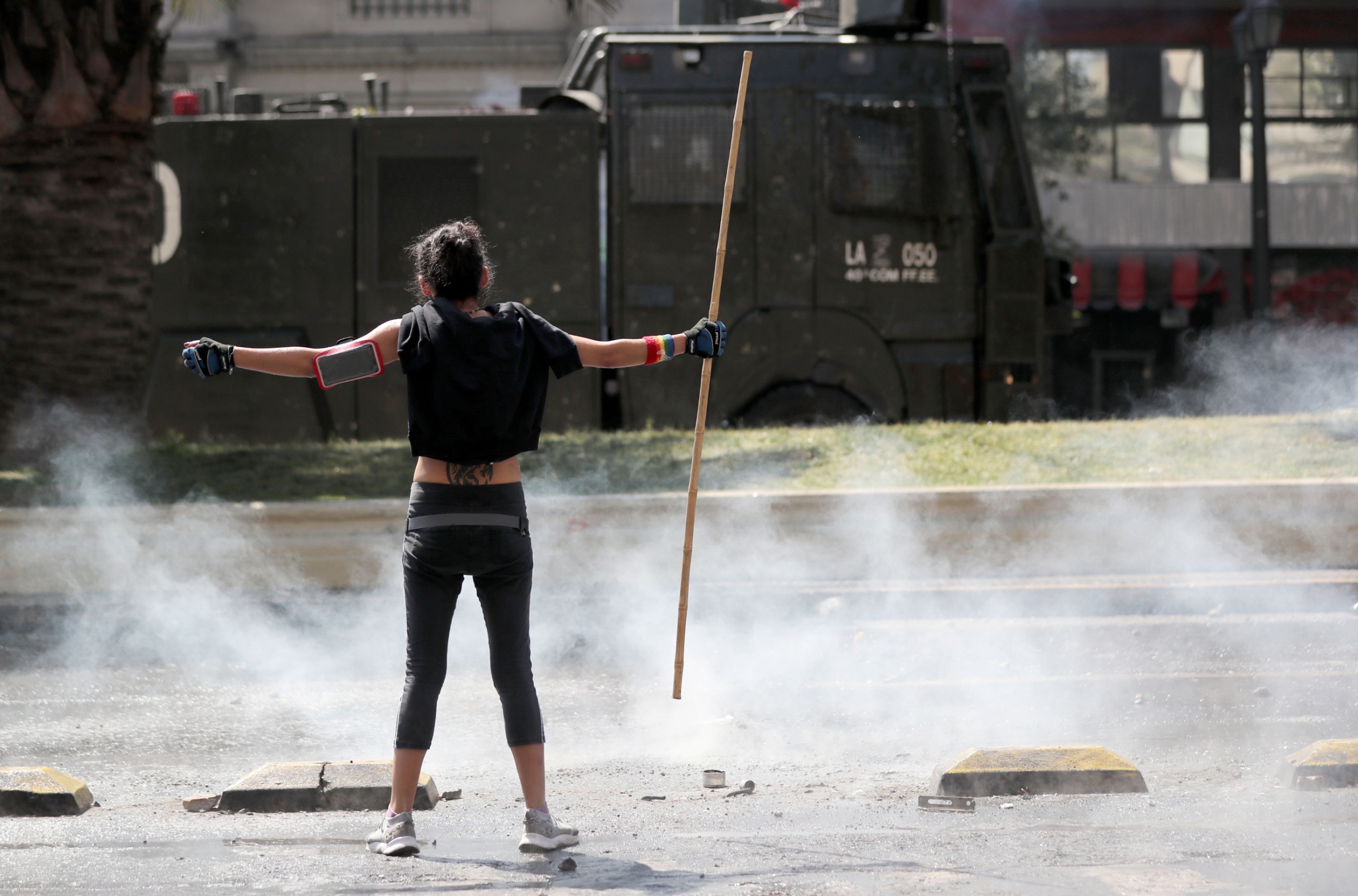 A woman stands with her arms out during a protest against Chile's state economic model in Santiago, Oct. 20, 2019.

Interior Minister Andres Chadwick said during a news conference in Santiago earlier on Sunday night that the decision to extend the emergency measure came amid an "escalation of violence and vandalism." 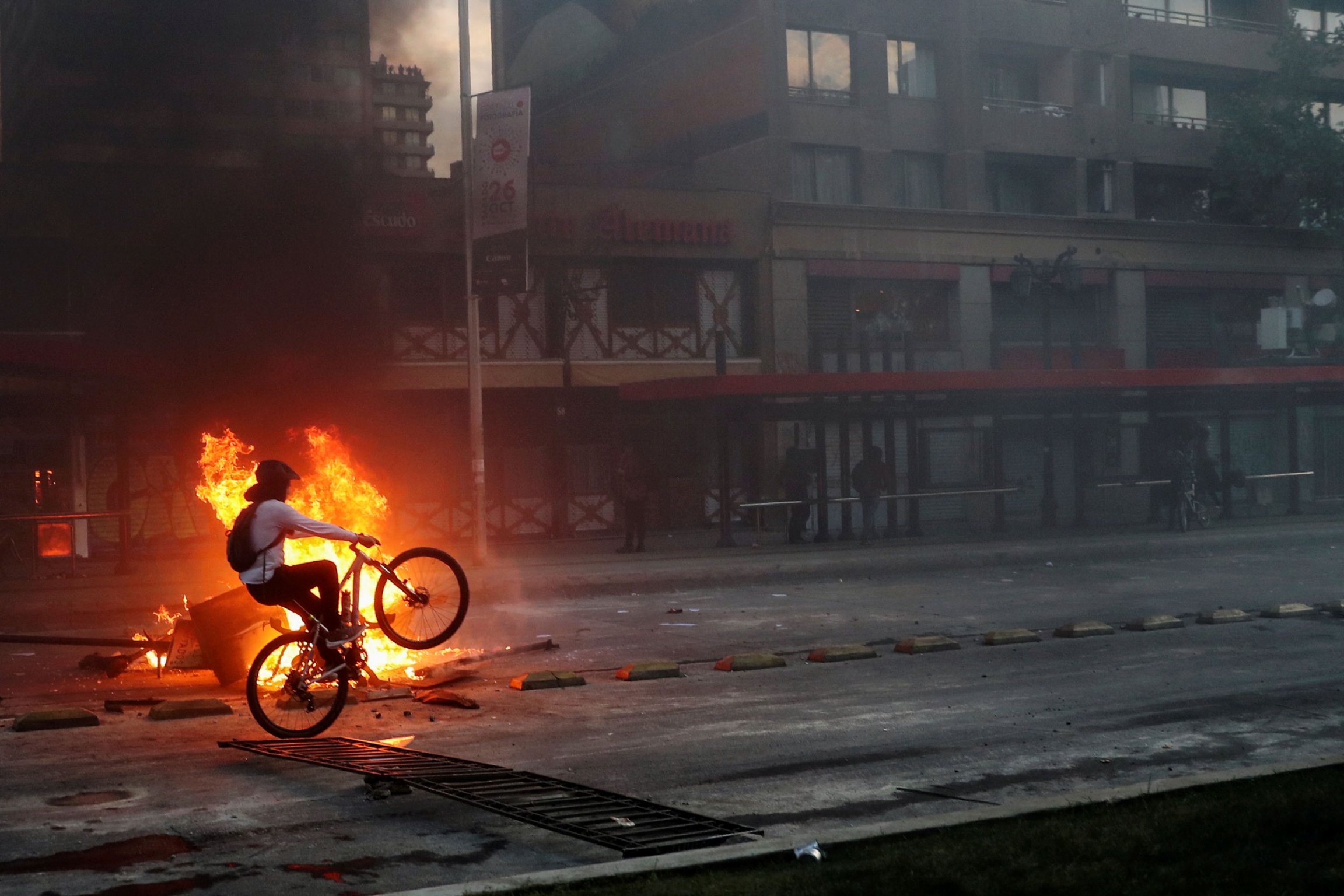 A demonstrator rides a bicycle past a bonfire during a protest in Santiago, Chile, Oct. 19, 2019.

He cited 70 "serious incidents of violence" on Sunday, including the looting of 40 supermarkets and other businesses. Chadwick said military and police numbers were at 10,500 in Santiago and would be reinforced where necessary. 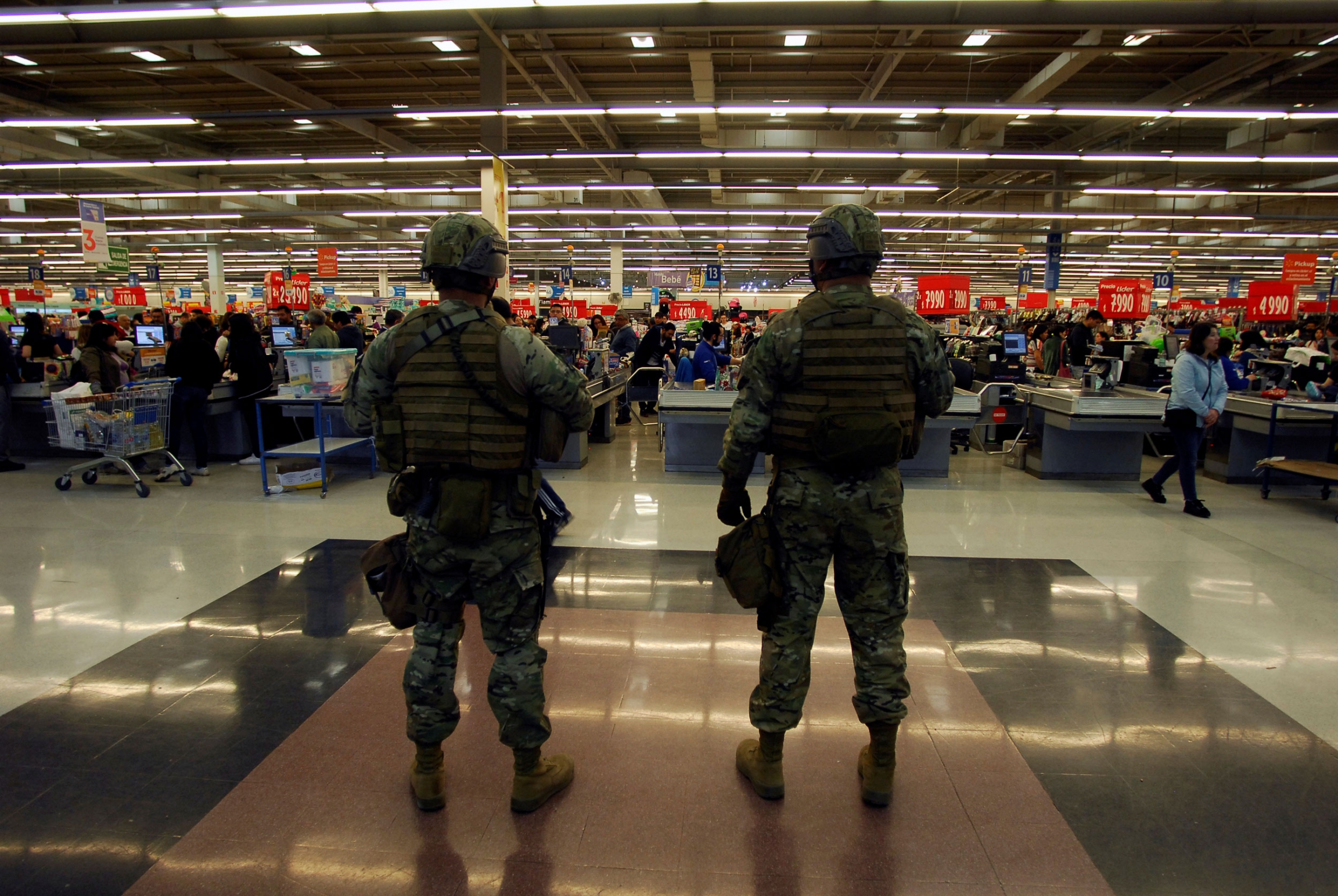 Soldiers stand guard inside a supermarket a day after a protests against the government, in Concepción, Chile, Oct. 20, 2019.

Santiago and other Chilean cities have been engulfed by several days of riots, along with peaceful protests, after the increase in public transport costs. The violence prompted Piñera to reverse the move and declare a state of emergency. 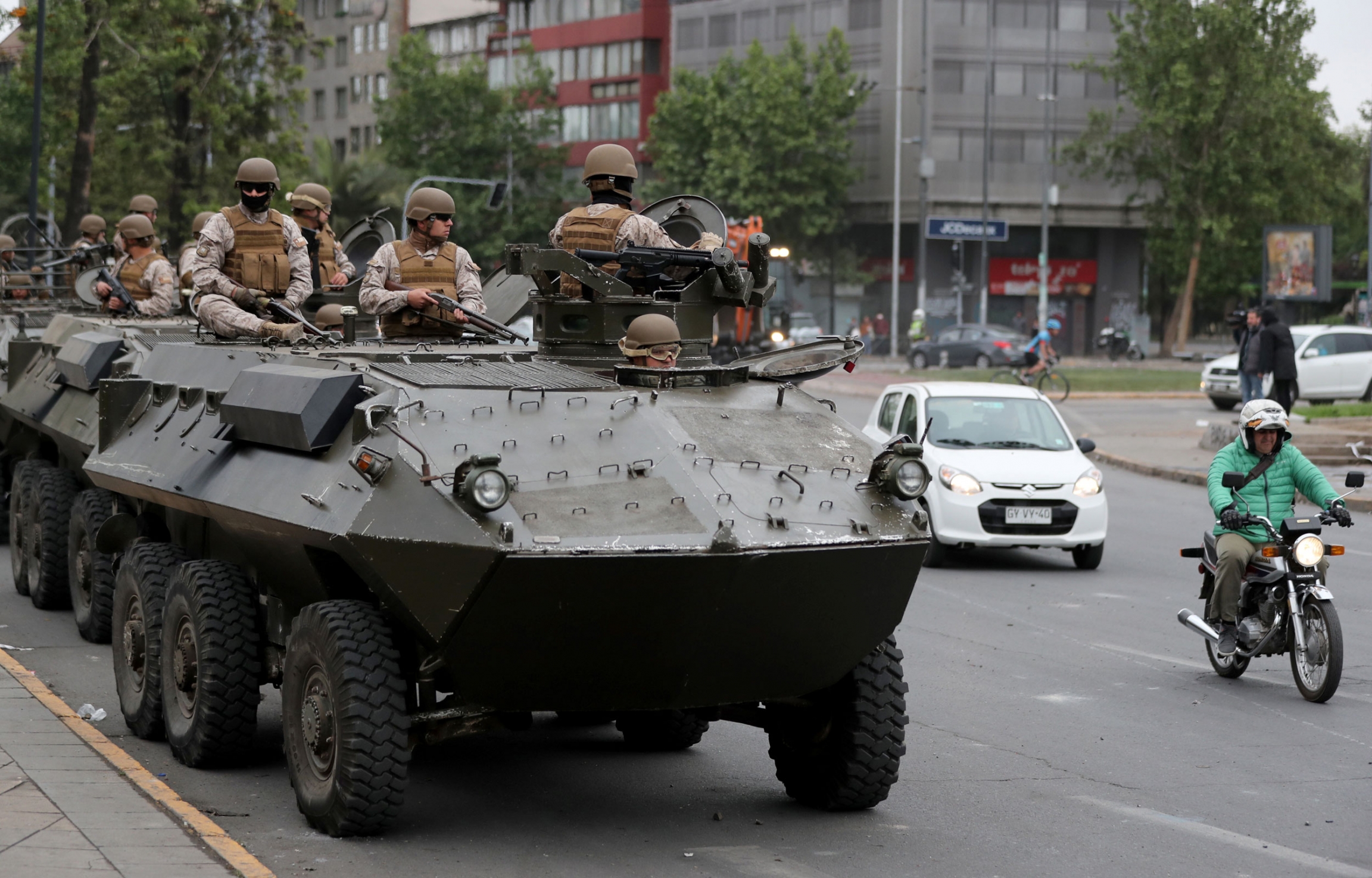 Soldiers ride an armored transporter as they patrol the Santiago, Chile, after widespread protests, Oct. 20, 2019.

Chadwick said seven people had been killed in incidents related to the protests, without giving further details.

He said the state of emergency applied in Santiago early on Saturday would be rolled out to Antofagasta, Valparaiso, Valdivia, Chillán, Talca, Temuco and Punta Arenas.

There was transport deadlock in Santiago and chaos at the international airport on Sunday, where flights into and out of the capital were suspended or canceled because crew members and airport staff were unable to get to work, the city's governor said. 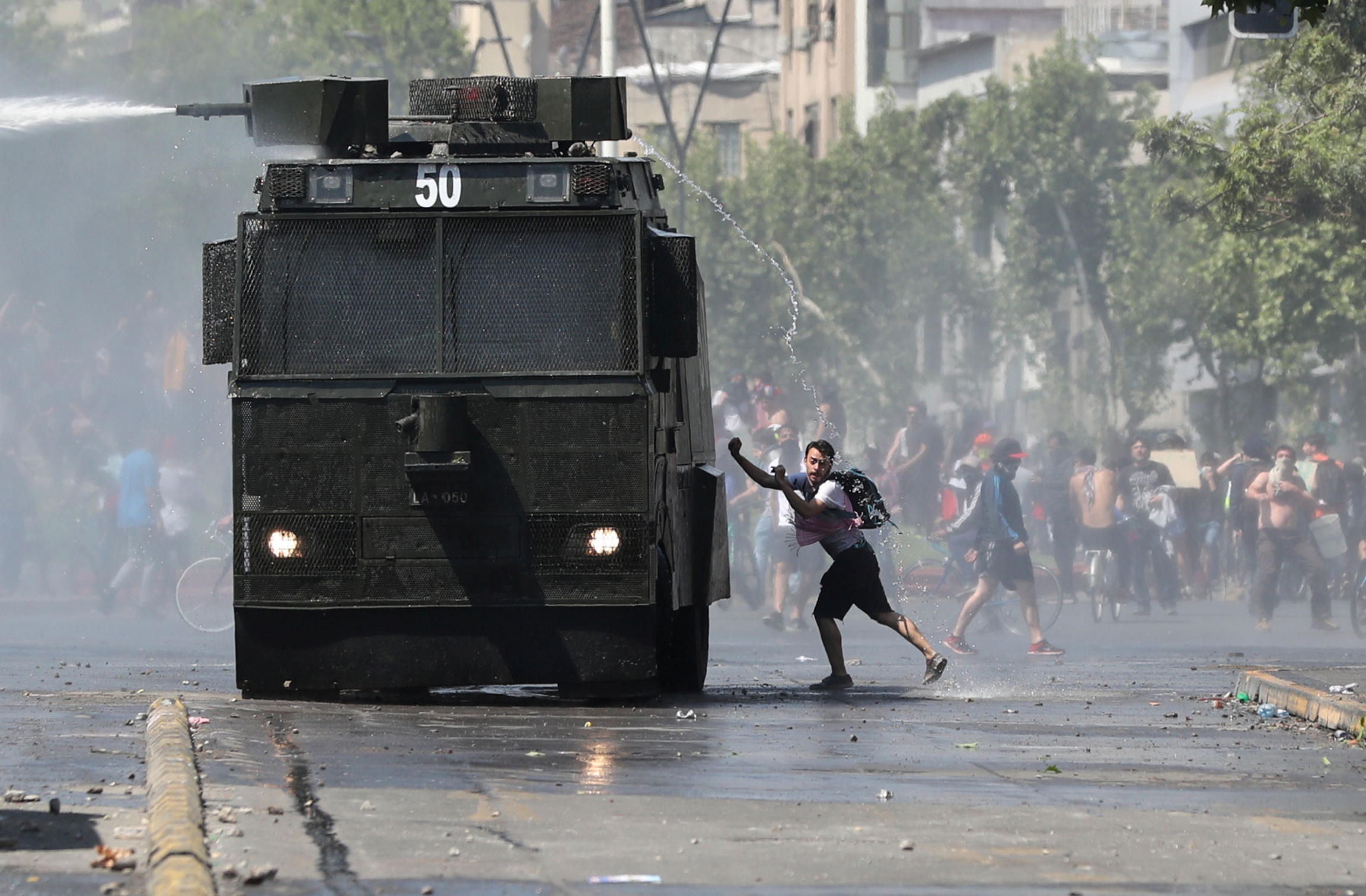 A demonstrator approaches a riot police water cannon during a protest in Santiago, Chile.

Prosecutors said 1,462 people had been charged by mid-afternoon on Sunday in connection with that day's protests, 614 of them in Santiago, That followed 179 arrests in Santiago on Saturday.

The military authorities mandated by Piñera with reestablishing order in Santiago declared on Sunday another night-time curfew in the capital as the government struggled to contain violent protests, looting and arson.

By Aislinn Laing and Natalia A. Ramos Miranda/Reuters