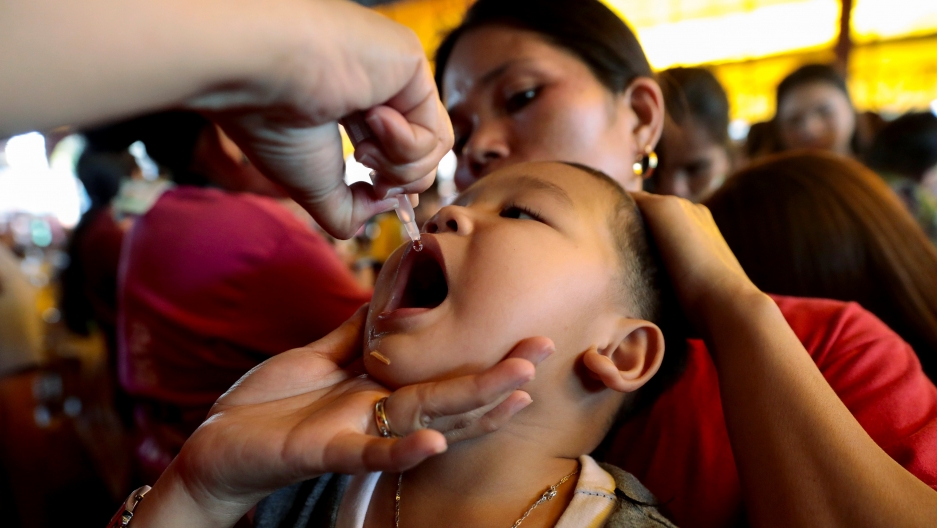 After being polio free for nearly two decades, polio has returned to the Philippines. Two cases were identified last month. Now, the nation is trying to vaccinate more than a million children below the age of 5.

Polio has no cure. It can cause paralysis, and at one point, it paralyzed more than 350,000 people annually, according to the World Health Organization. That was before the creation of a global, polio vaccine initiative. The number of cases has since declined 99%.

Heidi Larson, an anthropologist who heads the Vaccine Confidence Project at the London School of Hygiene and Tropical Medicine, has been involved in the global campaign to eradicate polio. She's also the author of the upcoming book, "Stuck: How Vaccine Rumors Start — And Why They Don't Go Away." Larson said the Philippines is experiencing something called "vaccine-derived polio." She spoke to The World's host Marco Werman about the vaccination effort underway there.

Heidi Larson: It doesn't mean that when you take the vaccine, you immediately get it. But it's a live virus, which sounds a bit complicated, but it's very little of it. So, it doesn't make you sick, but it goes right through you into the environment. And if there's no protection in the environment, that live virus can travel to somebody else. And the cases that came up in the Philippines actually came from that process because they didn't have that protective cover that the vaccine allows when everybody gets it. And that's one of the biggest challenges in the world with all vaccines — well, most vaccines. It's a health effort that needs everyone to cooperate. And if you have polarized or difficult situations where not everybody agrees, including as we have in the US, it causes a problem.

For example, if a Filipino kid got vaccinated with his live polio vaccine and then, I don't know, urinated, and that goes into the water stream — and then other people drink that?

Yes. It's not through urination. It's through the bowel. And it gets into the water and starts to circulate. And then it mutates and it becomes infective for other people. And we've seen that happen in a few places. And part of the reason it's happening is because we've eliminated the wild virus from most of the world. So, when it does circulate, it becomes much more potent.

So, you're basically saying the virus from the vaccine caused this resurgence in the Philippines.

In addition, there were low vaccine rates and mistrust to begin with. How did that start?

Well, in 2017, the country, which has a very big burden, as they call it, of dengue virus, which is really bad fever, and people call it bone-breaking disease. It's very painful. It can kill children.

It's transmitted by a mosquito or another insect?

Yes, it's like malaria. But it's interestingly transmitted at a different time of day than malaria.

So, because Brazil and the Philippines had some of the worst dengue in the world, when there was a new vaccine available that could prevent it, those were the two countries that really started to introduce it. But in the Philippines, they vaccinated over 800,000 children in schools in an area that was particularly affected. But a year later, the manufacturer who makes the vaccine sent out an announcement and said: "We've just learned that there is a small risk that this vaccine can create more severe dengue if you've never been exposed to dengue before." So, that created a panic in the population.

And that was not a rumor. That is, in fact, true. Is that right?

That was true. And that's another challenge with building vaccine confidence, is that there are risks for vaccines and there's risks in just about any medicine you take. But this was a real risk. And there are ways to manage it. You just need to make sure that the people who get the vaccine have had some kind of exposure. And that can just mean living in an area that has a lot of dengue. You don't have to have gotten sick. And so, it led to a lot of debates, and people were quite angry with the previous government. And as this happens, there had been a change in government, and they kind of pointed to the previous government as being the cause of all this problem and even took them to court for saying this was homicide. They were killing children.

They never found any case of a child being killed by the vaccine. But they did stop the vaccination campaign, and it created a lot of drama in the public. And it really scared the public. We did surveys with the public, my research group, that showed a 30% drop in confidence in vaccines, in general, across the whole country. And meanwhile, they lost trust in the government. They lost trust in the health authorities. And they were shy of taking other vaccines. There have been massive measles outbreaks in the Philippines because they slowed down on taking the measles vaccine. And then the polio came up.

Now, the government of the Philippines has this big vaccine drive going on. How's it going? Do you see any problems?

These things take time, and you need to stay very vigilant.

What is the state of polio around the world today? It was eliminated from the US 40 years ago. What's the rest of the world look like right now?

The rest of the world is looking pretty good, except for three countries that have not yet eliminated it: Pakistan and Afghanistan — it's really one border area that's been a difficult area because of conflict and war — and in northern Nigeria, which also has some high security and conflict issues.

One of our biggest challenges with the global eradication of polio is in these difficult areas where you can't get to every child to vaccinate. And then there's places like the Philippines, where there are other reasons that people don't vaccinate. And it allows the virus to come back.

What role can just one country or one community play in changing the course of a major infectious disease like this?

Oh, it can have a dramatic impact. I can give you the example of when I was working with the Global Polio Eradication Initiative in northern Nigeria in 2003, one state — for reasons of rumors that the vaccine could sterilize populations, and also, there were some political reasons behind the rumors. Not only the state boycotted it, but it let the virus come back in the state, travel around the country, but also reinfect over 20 countries across Africa and as far as Indonesia.

And that's just what one state's decision and one state stopping vaccination can have in terms of global impact.

Heidi, you've been working on polio for most of your career, but at least in the US, it may be hard to imagine just how serious the disease is because it's not really around anymore. What can you tell us about it from your own experience?

Well, from my own experience and part of my commitment to polio is that my father had polio. He was one of the luckier ones to not be paralyzed for life. But as a child, it was pretty traumatic. I mean, he was, I think, 14 years old and standing at a bus stop in Chicago and all of a sudden felt awful. And they diagnosed it as polio. He ended up in what they call these iron lungs, where they had to externally try to keep your breathing going. And the stigma around it, he carried that through his whole life.