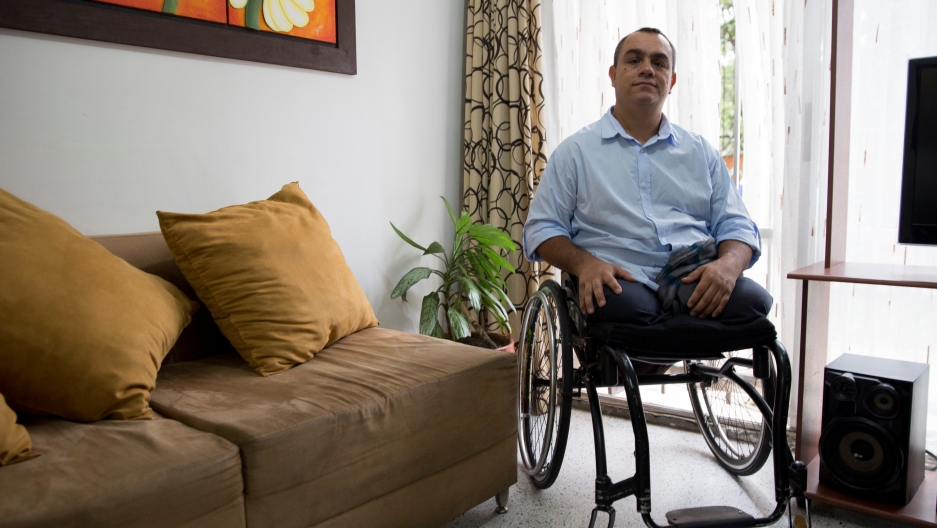 Former Colombian military official William Loaiza poses for a portrait in his home in Medellín, Colombia, on Oct. 11, 2019. Loaiza fell victim to a landmine while fighting in the country's more than half-century civil war and lost both of his legs.

The former Colombian military soldier was locked in battle with guerrilla combatants from the Revolutionary Armed Forces of Colombia (FARC) in northern Colombia. He was walking through the sweltering jungles when he stepped on a landmine, blowing both his legs off.

“Initially, I thought my entire life was over,” Loaiza said, his fingers tapping the arm of the wheelchair he now uses to get around.

Related: War is hell. Try doing it in a wheelchair.

At that moment, Loaiza became one of nearly 200,000 people in Colombia living with a disability as a result of the half-century of civil war, 12,000 of whom were also victims of antipersonnel landmines that speckled rural areas.

As Colombia now struggles to secure a lasting peace, the country’s vast mountains, rocky and unpaved roads and spanning pasturelands pose some of the biggest threats to people like Loaiza, who must navigate rough terrains in wheelchairs.

But an innovative project by researchers from Colombia’s biggest universities in the city of Medellín may act as a solution: the “Silla Todoterreno,” or the “All-Terrain Chair,” designed specifically for victims of the Colombian armed conflict.

The wheelchair is made of lightweight magnesium often used in high-quality gear for athletes, three heavy-duty wheels meant to take on the toughest terrains and levers like canoe oars meant to push the user forward at high speeds. 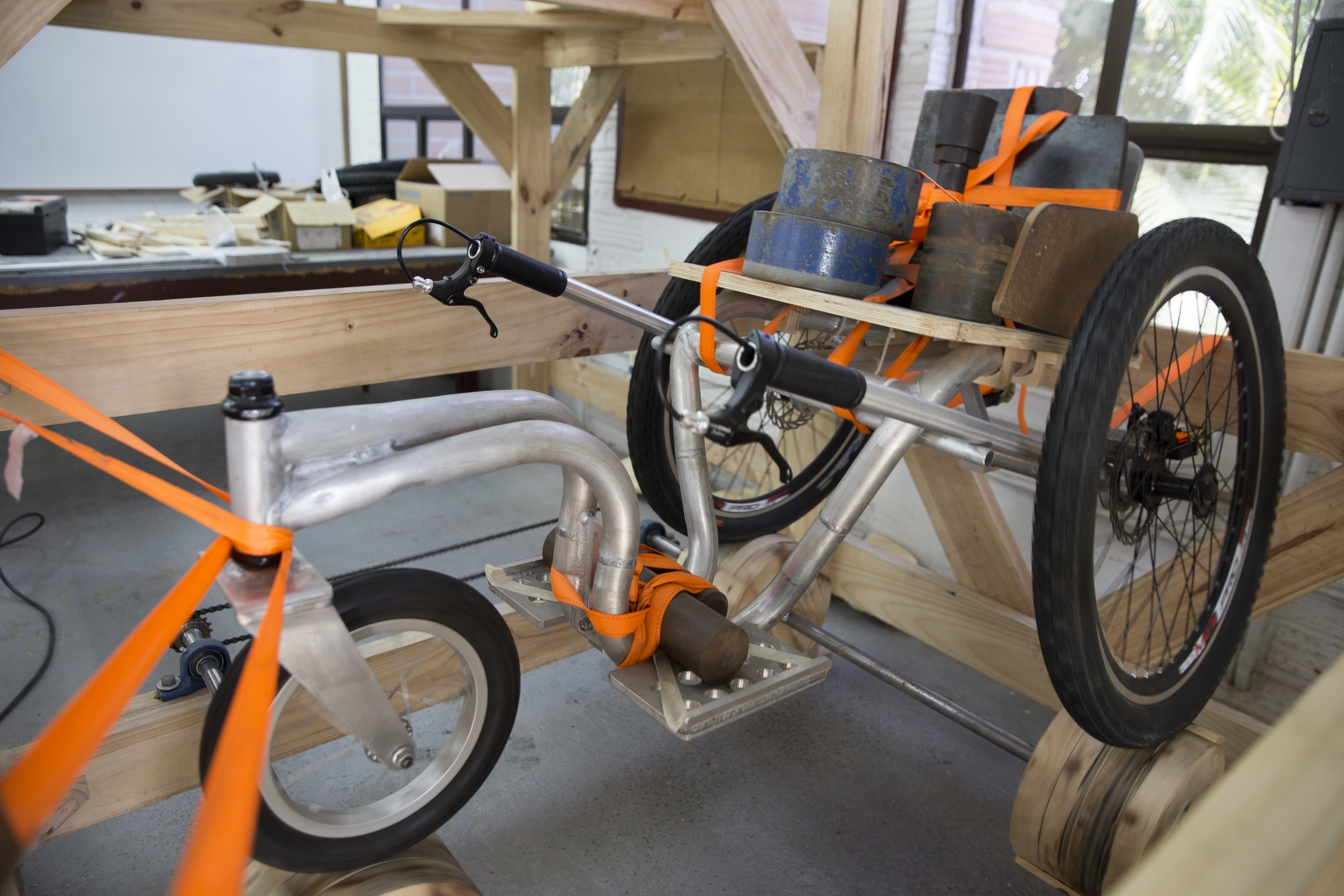 Scientists in Medellín, Colombia, test a prototype of the "Silla Todoterreno" by weighing it down and running the chair on a treadmill-style contraption to simulate the rugged terrains that the chair will have to face in Colombia's rural zones, Oct. 4, 2019.

The Silla could offer solutions to not just local communities coming out of conflict, but to victims worldwide who struggle with the same obstacles.

“We said a wheelchair precisely because there was a big number of people affected … by the conflict,” said Félix Echeverría researcher at the University of Antioquia, and a leader on the project. “And in cities, they have these possibilities, but in rural zones, there are very few options.”

Researchers at the University of Antioquia, Pontifical Bolivarian University and the University of Medellín took up the project in 2016 after the Colombian government signed a peace pact with the FARC. Their goal was to combine their scientific specialties to invent something that would address new struggles “post-conflict” communities faced.

The group found that victims with disabilities would often return to their rural, war-torn homes, without resources — and unable to maneuver the rough terrain.

That was the case for Loaiza, who moved from his small, northern Colombian town to Medellín because the area didn’t have treatment options for his legs after the accident and wasn’t developed enough for him to sustainably live. He called it a feeling of “powerlessness.”

“I didn't have any sort of mobility. ... The majority of the streets are unpaved, so your wheels would get stuck. You can't continue with normality, with freedom. You're just stuck in the streets.”

“I didn't have any sort of mobility,” Loaiza said. “The majority of the streets are unpaved, so your wheels would get stuck. You can't continue with normality, with freedom. You're just stuck in the streets.”

Consistent under-developed of former conflict zones has been a fundamental problem in the South American country. Despite pledges by the Colombian government in their 2016 peace pact with the FARC to develop rural zones left unreachable by decades of bloodshed, much of those promises remain unfulfilled years later.

Unpaved roads and lack of access to basic services have simmered political tensions and left Colombians with disabilities living with persisting obstacles. Those tensions came to a head in late August when former FARC leaders announced they were rearming, in large part, they said, because the Colombian government did not comply with key facets of the accords, like development.

Powerlessness was a shared sentiment among many with disabilities in those zones, said Paula Chacón, a researcher constructing the Silla Todoterreno. She and other scientists have worked with Loaiza and two other wheelchair users to ensure the construction of the chair fits their needs. 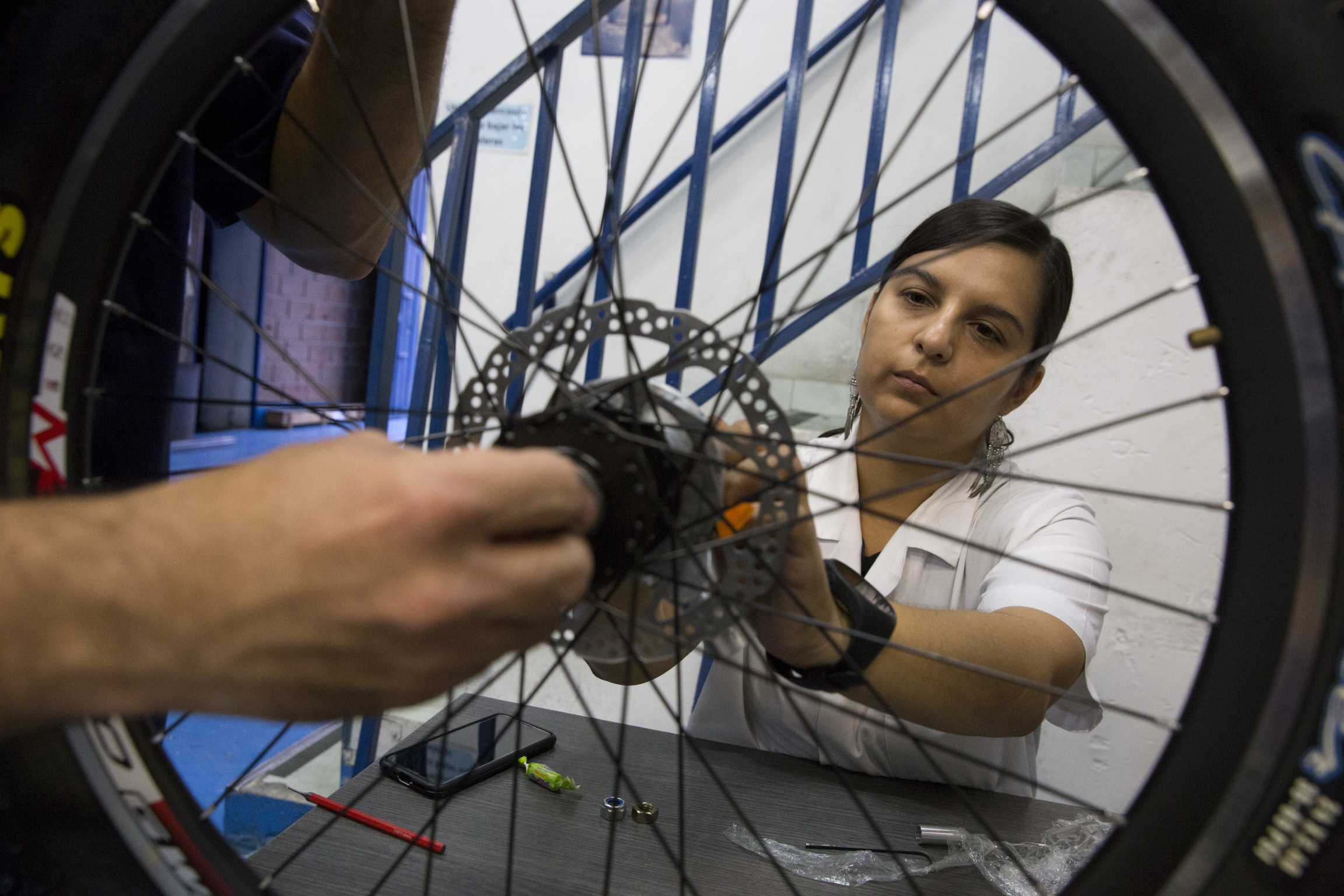 Researcher Paula Chacón constructs the propelling mechanism of the wheelchair with a colleague in a workshop on Oct. 9, 2019, in Medellín, Colombia.

The chair has faced a series of tests in Chacón’s lab, crashing, dropping thousands of times, and barreling over a jerky wooden treadmill-style machine simulating the kinds of roads it may soon endure. The three users have been instrumental in the tweaking of various prototypes as the tests have ensued.

Chacón said the lightweight material and propelling mechanism not only allows the user to ride over rocks, roots and more, but it also leaves spare energy that would normally be wasted on basic movement for other activities like community interaction, work and education. Dependence on family and friends to simply leave the house or travel down the street would melt away.

“Now that they can have more autonomy,” Chacón said, “they don't have to be limited, staying in their homes because they don't have the tools to move appropriately, efficiently.”

While similar-styled chairs exist around the world, their more complex construction and use of more costly materials like carbon fiber make them more luxury contraptions geared toward athletes. The prices, reaching anywhere from $3,000 to $9,000 are largely inaccessible in places like Colombia, that still suffer from high rates of poverty and unemployment.

Accessibility was key, Echeverría said, so the scientists kept the design simple and used magnesium, an abundant metal in the Earth’s crust, so they could construct the product locally and cheaply.

“Athletes use magnesium a lot because it's very lightweight,” Echeverría said. “In the cases of people with disabilities, they're not athletes, they're simply people who don't have a solution at hand.” 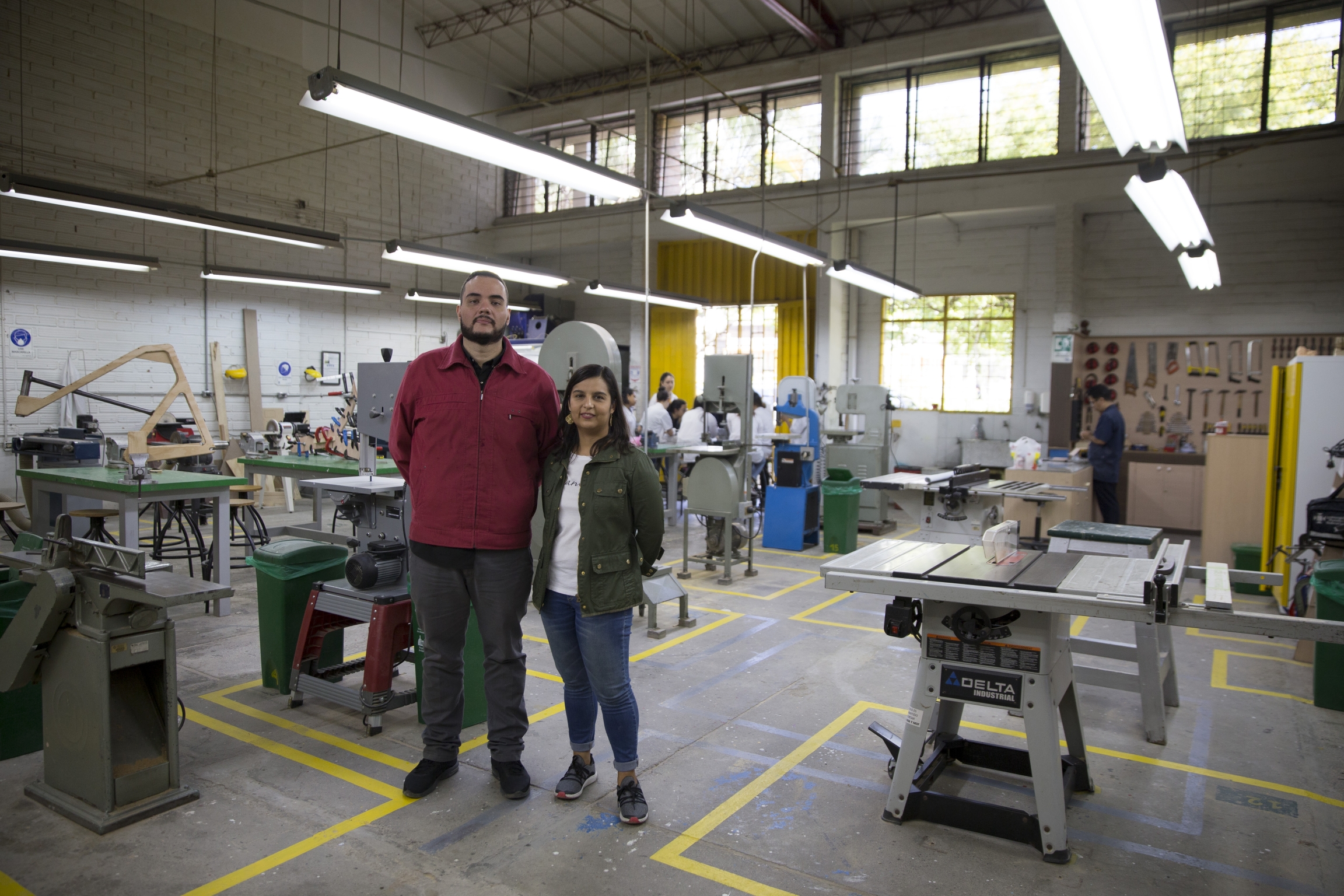 Researchers leading the wheelchair project, Paula Chacón and Alejandro Zuleta, pose for a portrait on Oct. 4, 2019, inside their workshops in Medellín, at Colombia's Pontifical Bolivarian University.

By the end of the construction process this coming year, Chacón, Echeverría and the team of researchers hope to collaborate with aid organizations and governmental organizations to produce the Silla on a larger scale and distribute them for free or at low cost to conflict victims in those zones.

For now, three chairs will be given to the three wheelchair users working with the scientists to refine and test its design.

As Loaiza worked with scientists to test the wheelchair design, he said he felt the difference it would make in his own life. They traveled out to the rural edges of the city where he rode the prototype of Silla Todoterreno through landscapes that had long acted as a barrier between him and his environment — over rocks, roots, hillsides and sand.

It was a feeling, he said, he hadn’t quite had since the explosion. He said he hopes it’s one that can be shared, not just in Colombia, but worldwide, as victims in other conflict-stricken countries take on similar obstacles.

“We went over tree roots and mountains, things that I normally wouldn't have been able to move through, and I felt really good, “ Loaiza said. “I felt like I could go wherever I want, this freedom, this happiness.”