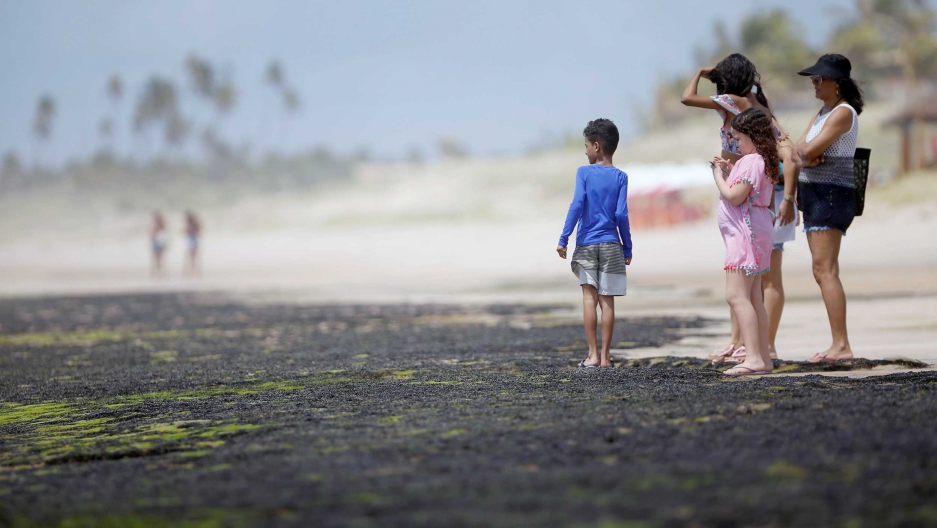 Crude oil has been washing up on the coast of the Brazilian northeast for over a month, leaving more than 150 of Brazil’s postcard-perfect beaches covered in thick, sludgy black patches.

The origin of the oil, found in nine Brazilian states along a 1,200-mile stretch of coastline, remains unknown. People who fish, bathe and swim in these waters have been affected.

“We do not know exactly how much oil has been spilled and how much has reached the Brazilian northeast. But I can say that this is the biggest environmental disaster in the history of Brazil, if we consider the length of the coastline that has been affected,” said biologist Flavio Lima, coordinator of Projeto Cetáceos da Costa Branca at Rio Grande do Norte State University. 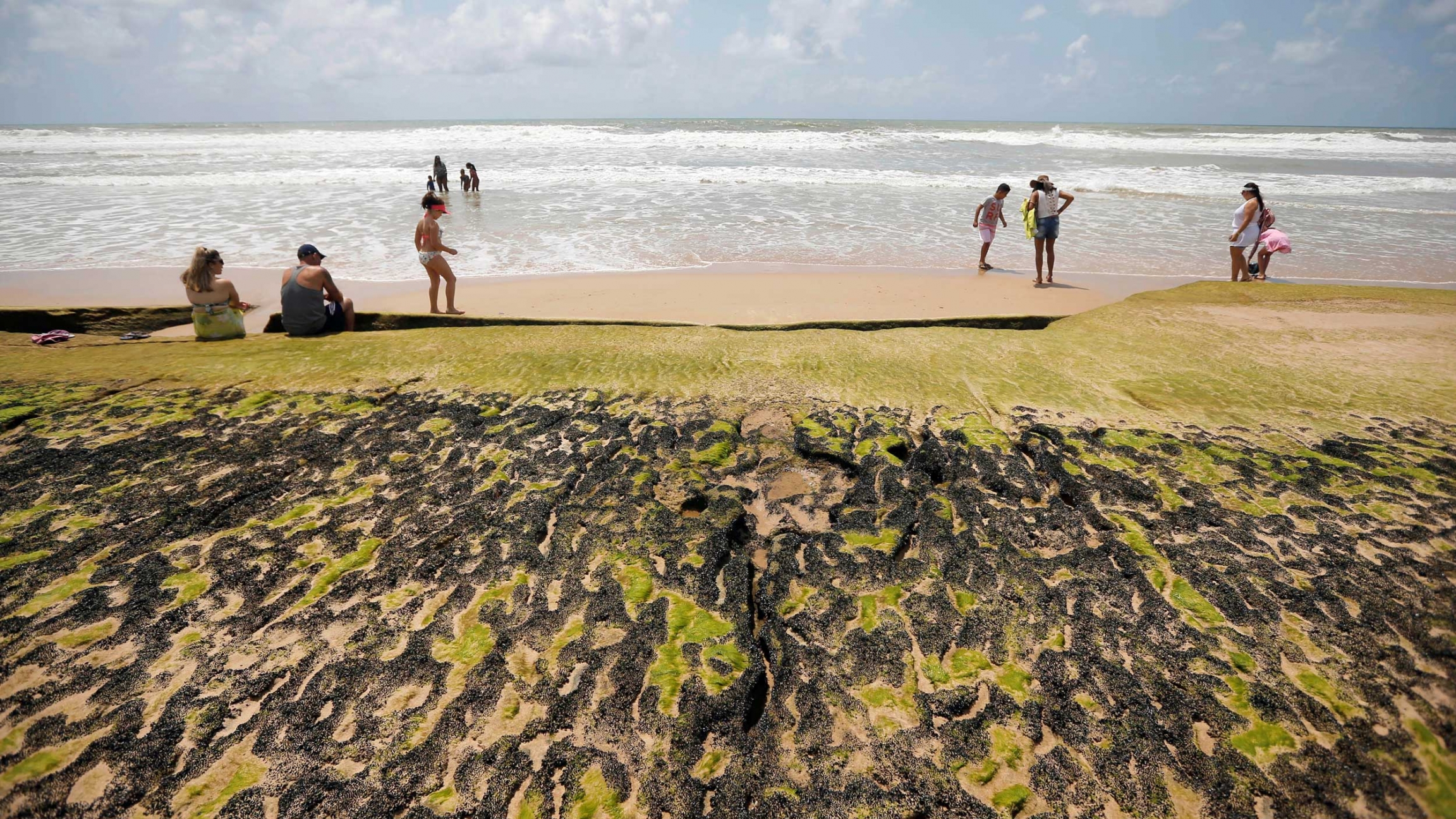 It is also along this coastline that olive ridley and loggerhead sea turtles come to make their nests and lay their eggs. After 40 to 50 days of incubation, the hatchlings walk across the sand and into the sea.

According to an Oct. 14 report by the Brazilian Institute of the Environment and Renewable Natural Resources, 24 adult sea turtles — some still alive — have been found covered in oil along the coast. 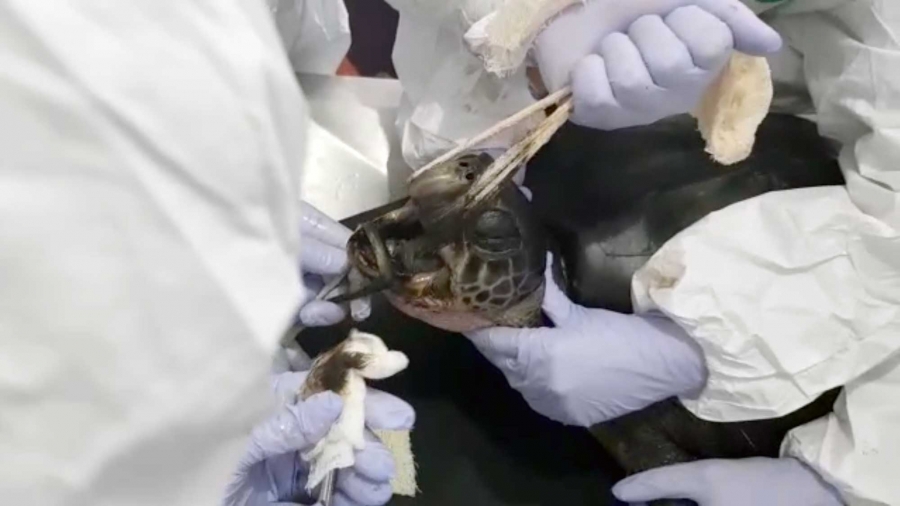 In a screengrab taken from a video, workers hold open the sea turtle's mouth to remove oil.

Lima oversees a decontamination center for sea animals affected by oil spills where one sea turtle completely covered in oil was cleaned and treated during the last week of September.

So how do you save a turtle covered in oil?

Workers cleaned the oil off the outside of one turtle and used activated carbon to absorb the oil she had eaten. The turtle has yet to be released. 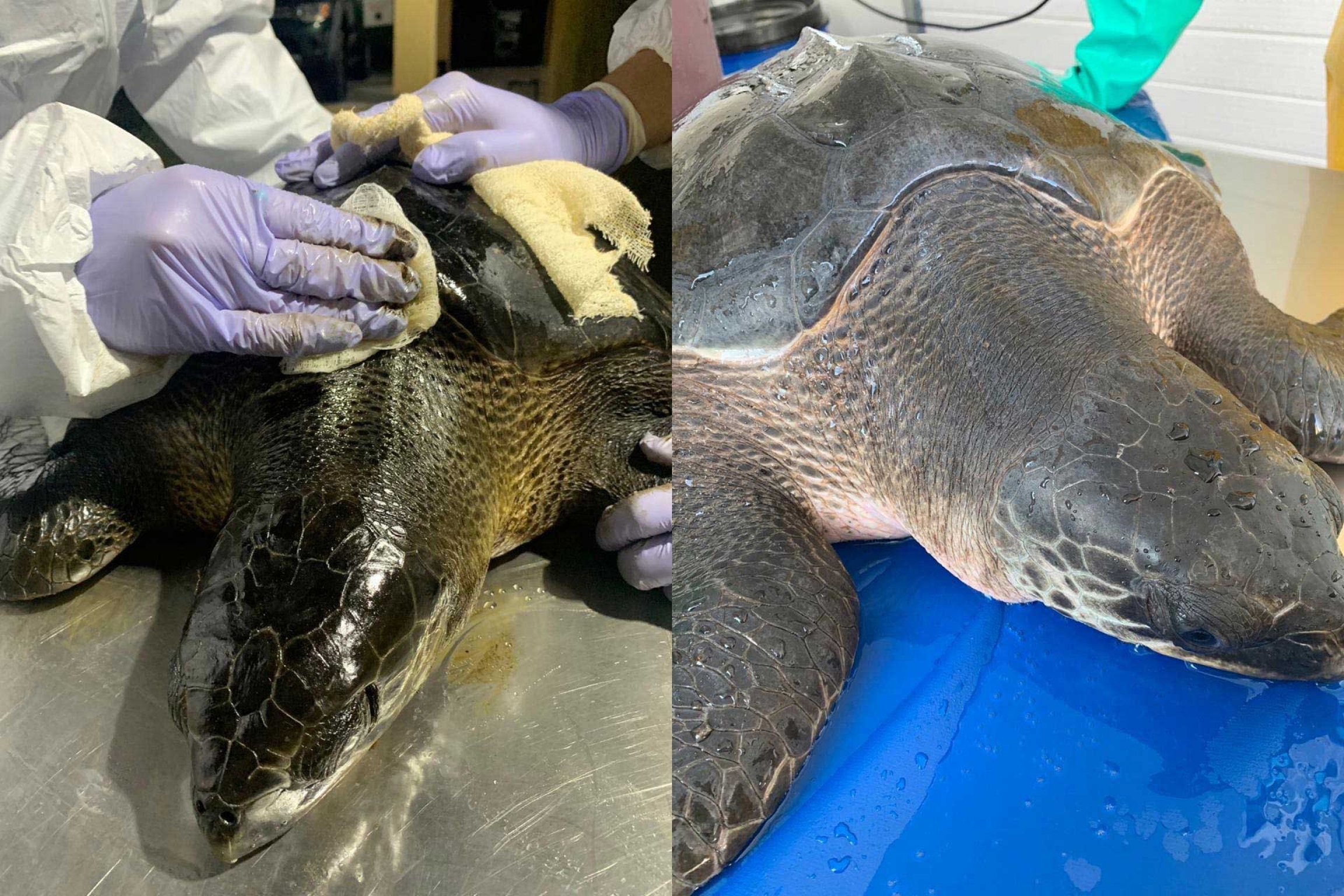 These images show the turtle covered in oil before workers cleaned her and after. She was given medicine and activated carbon to help remove the oil she'd eaten.

Lima said some of the areas affected by the oil spill are important feeding and reproduction grounds — not only for sea turtles, but for manatees, migratory birds, dolphins and whales.

The Brazilian Navy is investigating the origin of the oil. It said it has not found oil in the open sea, only on beaches, which means that the oil is floating under the surface of the water and harder to track.

The Navy said in a press release last week it is analyzing marine traffic records in the region and computer models of ocean currents and winds and notifying 30 oil tankers from 10 different flags to request information.

"About 140 ships navigated in this region,” Brazil’s President Jair Bolsonaro said last week.  “This could be a criminal act, could be an accidental spill. It could also be a ship that sank. It is complex.”

State-run oil company Petrobras told BBC News Brasil that “the organic composition of the material is not compatible with the oil that Petrobras produces or commercializes.” A study by the Navy found that the substances’ chemical makeup is "compatible to that of crude oil." 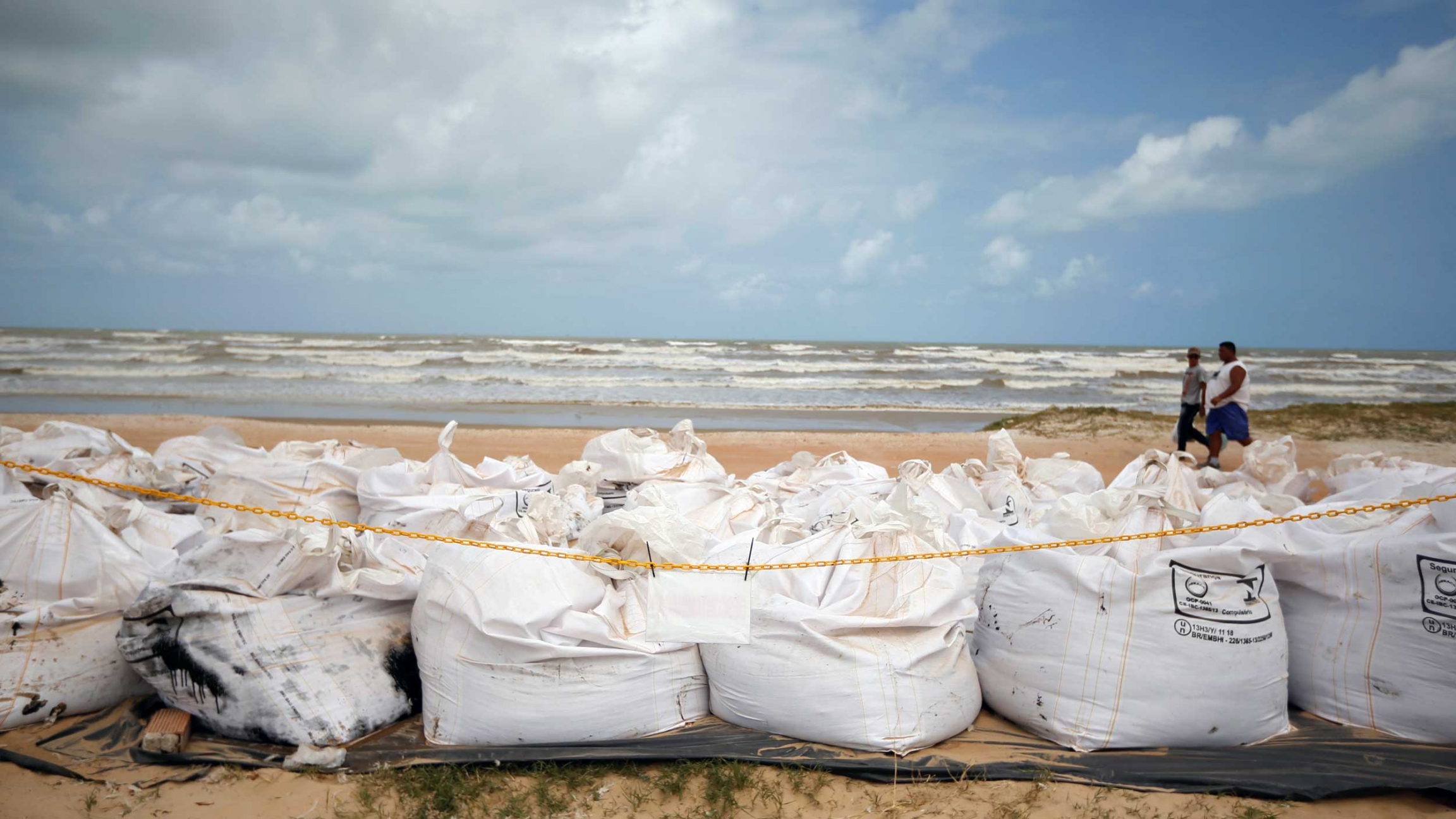 Bags containing the clean-up from an oil spill are seen on Viral beach in Aracaju, Sergipe state, Brazil, on Oct. 11, 2019.

Cleanup work is underway in every affected state. Crews respond to reports of the presence of oil, pick it up with shovels, and put it in large, white plastic bags.

But the scale of the affected area is a challenge. Christina Araujo, an oceanographer with the Federal University of Rio Grande do Norte, said while efforts are underway to clean up the oil, it’s impossible to cover the entire coastline.

“The cleanup effort is concentrated in urban areas to reduce the social and economic impact but there are remote areas — some very important environmentally — that are not being cleaned because there are not enough people or resources to do it,” Araujo said.

“We do not know where the spill originated, where it’s going, how much there is. It is horrible for someone working in conservation because [the oil] takes you by surprise,” said Cesar Coelho, Projeto Tamar's director of sustainability. “We only know about the oil when it arrives to the beach, and this makes our work very difficult.” 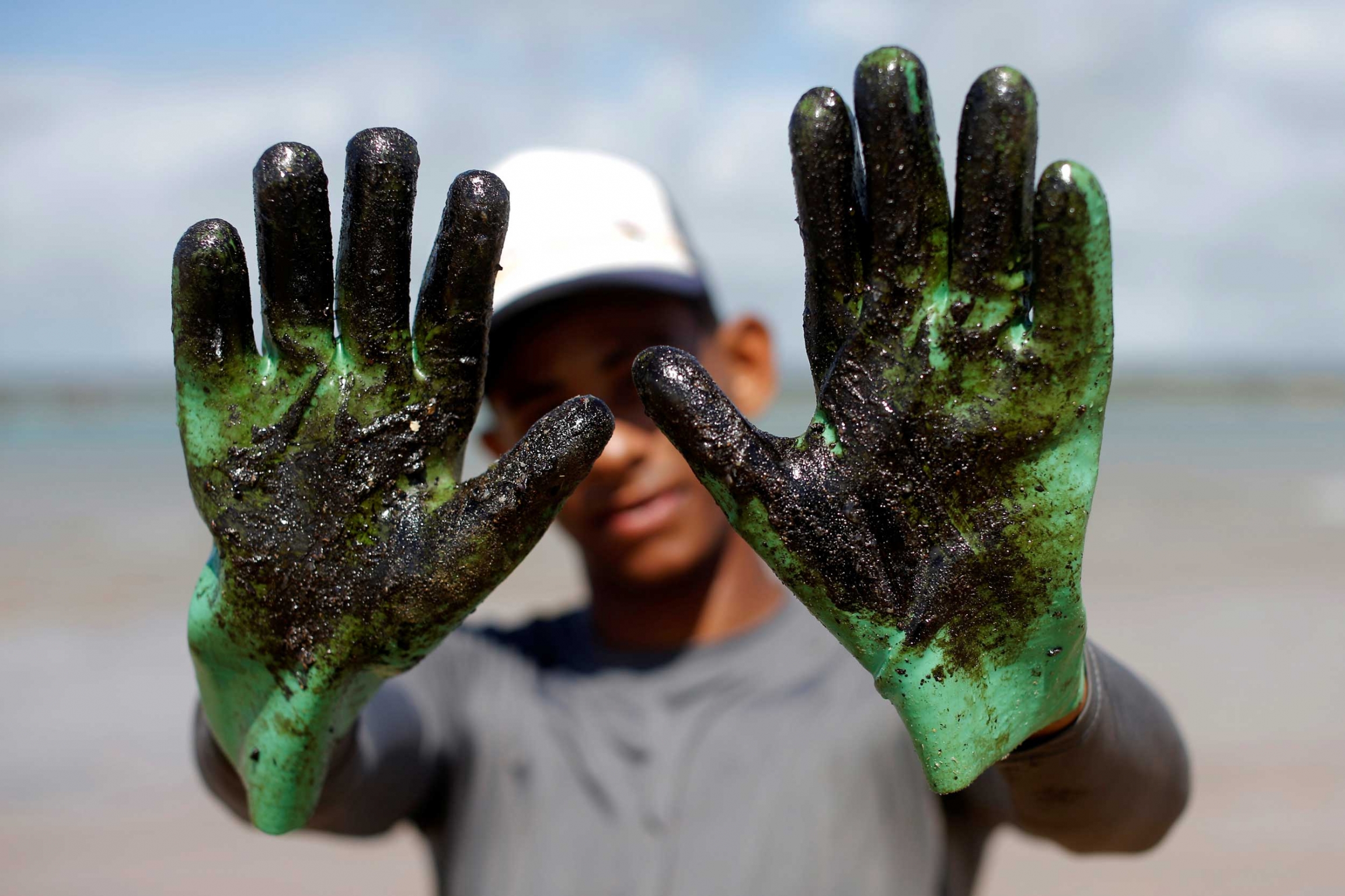 A man shows his oil-covered gloves as he works to remove an oil spill on Coruripe beach, Alagoas state, Brazil, on Oct. 14, 2019.

Coelho said biologists and researchers from Projeto Tamar have monitored the oil spill from the start. Now, as oil continues to wash up on the coasts of the states of Sergipe and Bahia, field crews are trying to capture the hatchlings of 500 nests before they walk into the ocean. This is being done to protect the baby sea turtles from walking into black sludge or swimming through oily waters. Coelho said about 800,000 hatchlings walk into the sea every year on the coast of Sergipe.

In an unprecedented step, last week, biologists from Projeto Tamar and the Chico Mendes Institute for the Conservation of Biodiversity, an environmental agency of the Brazilian government, took nearly 1,000 olive ridley baby sea turtles and released them into open water about 15 miles off the coast of Aracaju, the capital of the state of Sergipe. He said this was done as a last resort to save them.

Related: See the baby turtles swim into the open ocean

“Releasing the sea turtles in the open water is not a recommended practice,” Coelho said. “The hatchlings need to take this walk from the nest into the sea. This walk is called 'imprint,' and this is how, 20 or 30 years later, the adult animal can come back to the same beach that she was born to lay her eggs. When we take them into the open ocean, we do not know how they are going to be affected.”

Coelho also said he hopes the investigation can find the source of the oil and the problem can be contained before the hatchling season peaks in December and January.