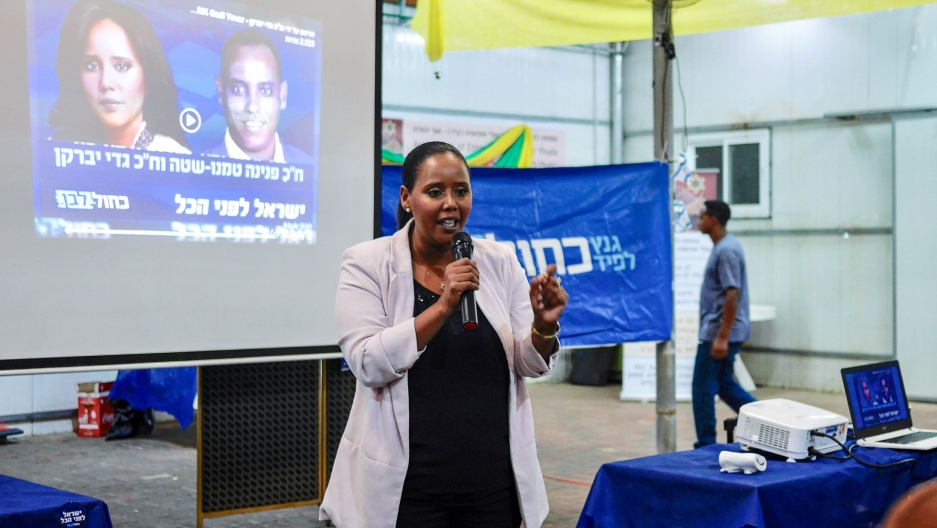 Pnina Tamano-Shata spoke at a town hall meeting for Ethiopian Israeli voters in the town of Or Yehuda ahead of Israel's national election on Sept. 17, 2019.

On the day that 38-year-old Gadi Yevarkan took the oath of office in the Israeli Knesset, he welcomed his mother to the ceremony in the parliament building by kneeling down in front of her and kissing her feet. It was a rare public display of a traditional Ethiopian gesture of respect.

In mid-September, Yevarkan spoke at a town hall meeting in a suburb of Tel Aviv called Or Yehuda. Almost everyone in the audience was Ethiopian, with the men sitting on one side of the room and the women on the other. When he addressed the gathering, Yevarkan spoke mostly in Amharic, the official language of Ethiopia.

When he introduced himself to a reporter, he said, “I’m a Zionist, a proud Israeli and a patriot.”

Yevarkan says the first issue that comes up with Ethiopian voters these days is a difficult one: racial profiling by Israel’s police. This is a well-known problem in Israel, he says, and he sees his job in the Knesset as passing legislation to stop it.

Over the summer, an off-duty Israeli cop shot and killed an Ethiopian teenager. That shooting came after another fatal police shooting of a young Ethiopian man early in the year, and it sparked large protests by Ethiopians in several Israeli cities.

The demonstrations blocked traffic on major roads. In some instances, they were violent.

Going into the September election, police brutality was a major concern for many Ethiopian voters, and was on people's minds at the town hall meeting.

“They need to stop killing our kids. The officer who killed the teenager is still at home.”

“They need to stop killing our kids,” said Melazish Mangessa, a mother from Or Yehuda. “The officer who killed the teenager is still at home.”

The police officer’s case is still in court. His name has been withheld by authorities, but he will reportedly be charged with negligent homicide, which carries a maximum sentence of three years in prison.

Mangessa said she hopes that Ethiopian lawmakers, if they make it into parliament, can make a difference. She is looking closely to Yevarkan and another Ethiopian politician, Pnina Tamano-Shata, who was at the same town hall meeting.

Like Yevarkan, Tamano-Shata was born in Ethiopia. She was 2 years old when she arrived in Israel in 1985 as part of a group of about 8,000 Ethiopian Jews brought to the Jewish state by a military airlift called Operation Moses. They were refugees who had fled famine and war in Ethiopia, ended up in displacement camps in Sudan and then would begin new lives in Israel.

Related: For many Israelis, this election is all about Bibi

"For us, Israel, the holy land, Jerusalem, is home,” Tamano-Shata said. “It was a dream that came true.”

Today, Israel is home to about 150,000 Ethiopian Jews who make up nearly 2% of the country’s population.

Tamano-Shata has followed an extraordinary career path. After she finished her mandatory army service, she had some success as a pop singer and then went to law school. She later got into activism and journalism.

But even with that stellar resume, Tamano-Shata says that growing up as a new immigrant, and part of a minority of Jewish Israelis who are black, has meant that she has long been keenly aware of discrimination. She says she decided to run for parliament to do something about it.

“There is discrimination and racism [in Israel]. I knew that I must struggle against that. And not only me, but all the new generation that was born and grew up in Israel. For us, it is very important to feel equal.”

“There is discrimination and racism [in Israel],” she said. “I knew that I must struggle against that. And not only me, but all the new generation that was born and grew up in Israel. For us, it is very important to feel equal.”

Tamano-Shata was first elected to the Knesset in 2013. She has worked on access to education for Ethiopians, including in towns where students were prevented from attending all-white schools. She says she has addressed disparities in Israel’s juvenile justice system, where young Ethiopian-Israelis are locked up at far higher rates than the Jewish population as a whole.

When hundreds of Ethiopians took to the streets this past summer to protest police brutality, Tamano-Shata says she was not surprised. She says the problem has been simmering for a long time in Israel.

"There is profiling against Ethiopians. We are the only black[s] in this country, and it has put us in a very bad situation, that our children feel that they suffer violence behavior from police,” she said.

Like most Ethiopians in Israel, Tamano-Shata says she grew up in a family that always voted for Likud, the right-wing party of Prime Minister Benjamin Netanyahu. But both she and Yevarkan joined the centrist Blue and White party.

After all of the votes were counted in September, each of the candidates was high enough on the party list to make it into the Knesset again.

Party leaders are still in negotiations now about forming a governing coalition. If and when that coalition takes shape in the coming weeks, Yevarkan and Tamano-Shata say they will get to work trying to fulfill the promises they've made to their supporters.