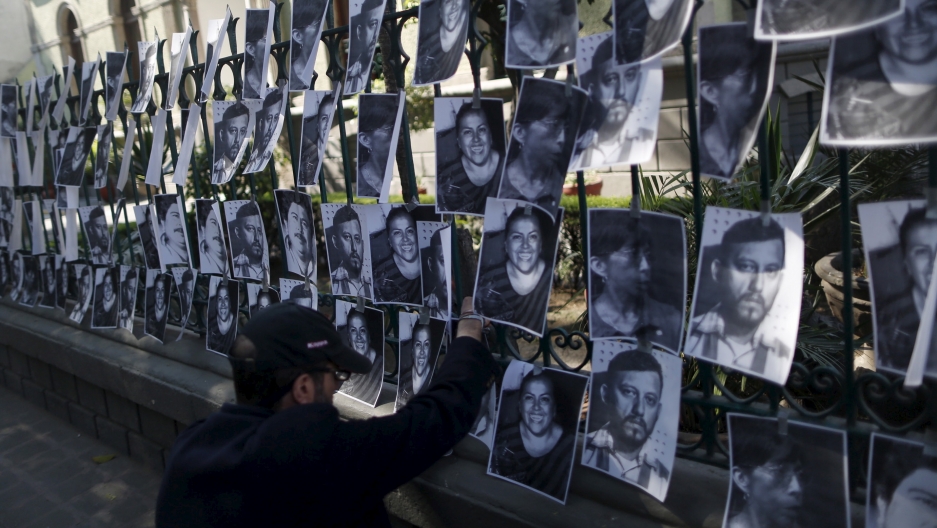 A man hangs images of murdered journalists during a demonstration against the murder of a journalist Anabel Flores outside the Government of Veracruz building in Mexico City, February 11, 2016.

Miroslava Breach died the way many other journalists in Mexico do.

On March 23, 2017, she was gunned down in daylight outside her home. For years, Breach had reported for national newspapers in Mexico on organized criminal groups and official corruption in her home state of Chihuahua, in the country’s north. It was her aggressive reporting that likely cost her life.

At the crime scene, her assassin left a note that read: "For being a loud-mouth." It was signed “El 80,” the nickname of the local cartel leader.

Breach’s death was followed by the murder of another high-profile journalist in 2017: Javier Valdez, a reporter who also investigated cartel violence in the state of Sinaloa for a local newspaper, Río Doce.

For years, Mexico has been deadly for reporters. Between 1992 and 2019, 52 journalists have been killed in which the motive is confirmed as related to their work, according to the Committee to Protect Journalists, a New York-based press freedom group. This year is bad, again, with at least 11 journalists murdered so far. That makes Mexico one of the world's deadliest countries for journalists. Victims range from well-known reporters like Miroslava Breach to reporters in small towns who are often the only reporters around. 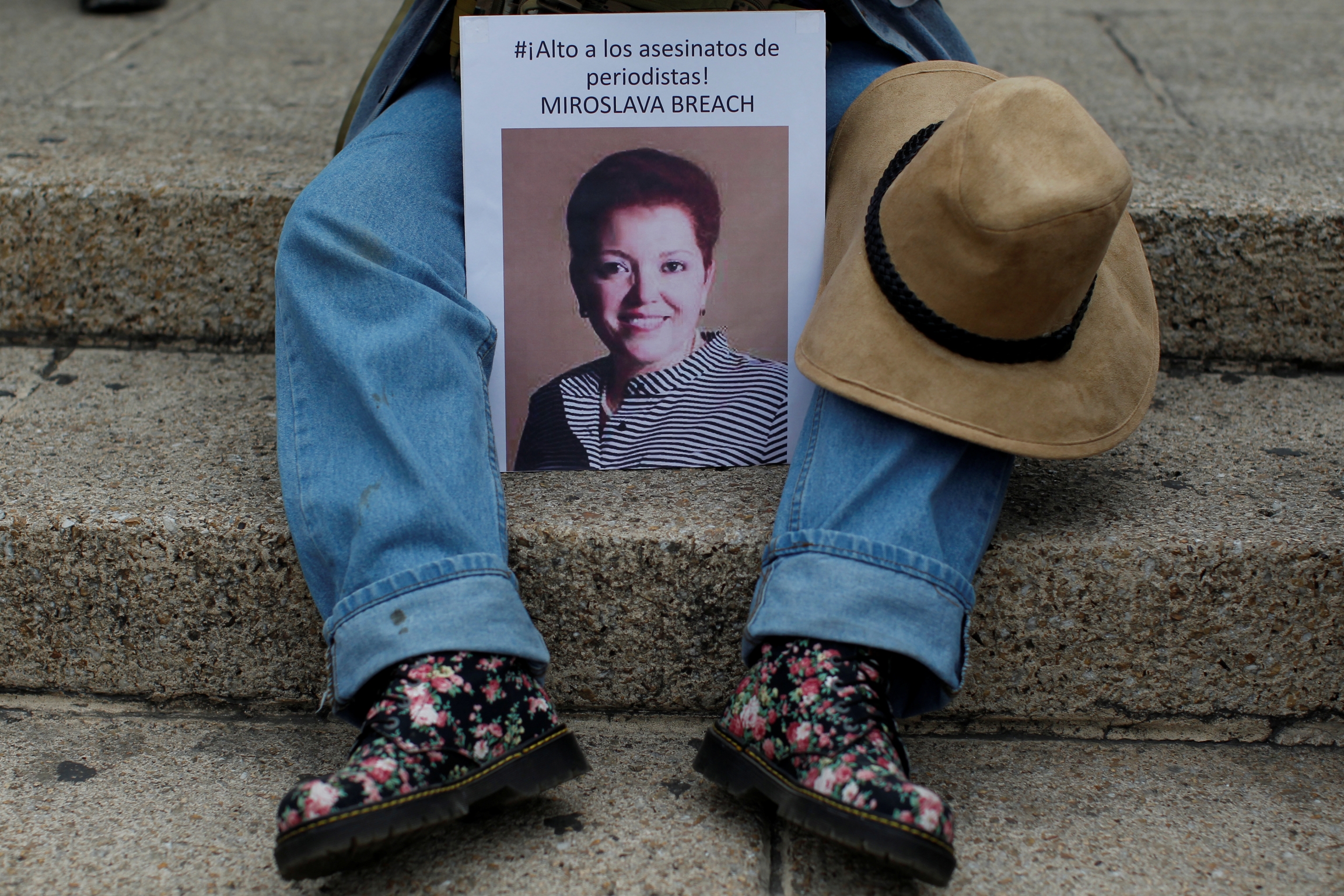 A picture of the Mexican journalist Miroslava Breach is seen during a protest against the murder of Miroslava, in Mexico City, Mexico March 25, 2017. Poster reads "Stop the murders of Journalists"

Reporter Sandra Rodríguez-Nieto knew both Breach and Valdez and reported for years on violence related to drug cartels in the northern city, Ciudad Juárez, also in Chihuahua, just across the border from El Paso, Texas. Rodríguez-Nieto suspected that Breach’s murder would go unsolved. She was right. Nobody has been convicted in Breach’s case.

“I think that the level of impunity has made clear that nobody is going to do anything if another reporter is killed,” said Rodríguez-Nieto.

At El Diario, the newspaper in Juárez where Sandra Rodriguez-Nieto works as a senior editor, there is an empty desk where her colleague, Armando Rodríguez, once sat. In 2008, he was a top crime reporter — who was gunned down in his driveway.

Just days before he was killed, Rodríguez told The World's Monica Campbell: “I feel like a war reporter, but there are no battle lines.” (Campbell, then working for the Committee to Protect Journalists, interviewed Rodríguez about the risks of reporting in Mexico.)

Drug cartels are a major threat, but so are the public officials and law enforcement officers who they can corrupt and collude with, according to the CPJ.

“If you consider the fact that the majority of crimes not just lethal but non lethal committed against reporters are committed by government officials at the state or local level, it’s very difficult for a reporter in Mexico to trust a government to be responsible for their protection,” said Jan-Albert Hootsen, the CPJ representative based in Mexico City.

Despite the dangers, though, some journalists still take on risky stories and deep investigations.

Mónica González is a photojournalist who has documented violence against women in some of the most violent neighborhoods near Mexico City. She has followed families who take shovels and picks and go digging in the hills searching for loved ones — criminals often hide bodies in clandestine pits in Mexico.

How does she stay safe?

In fact, González is part of Periodistas de a Pie, a growing network of independent journalists in Mexico who collaborate and alert each other of security threats via secure messaging apps.

González has other rules, too.

“I constantly monitor my surroundings,” she said. “I’ll switch to smaller cameras to not stand out, and I’ll avoid photographing people in public, if necessary. What we don’t want is to attract attention to ourselves or the people we are with.”

Reporters also acknowledge that the range of no-go zones is broadening. Homicide and crime overall are up in Mexico — and spreading to parts of the country once considered safe.

“It used to be that you knew reporting in a place like Ciudad Juárez was dangerous,” said Rodríguez-Nieto. “Now, more of the country resembles Juárez. There are far more places considered dangers, such as Guanajuato, a state that was once safe but where we now see criminals operating with impunity.”

In addition to the constant risks, some journalists are pointing to a new one: Mexico’s President Andrés Manuel López Obrador.

At a press conference in July, he singled out Proceso, one of Mexico’s main newsweeklies, of “not behaving” and producing critical coverage about the president’s administration. In response, the Proceso reporter at the press conference, Arturo Rodríguez, said that it was not the media’s job to behave rather “to inform.”

“We thought that it was opening up a new era. But actually what we’re seeing is that there hasn’t been much change,” said Javier Garza, a journalist and media safety consultant in Torreón, a city in the northern Mexican state of Coauhila.

Garza remembers when the newspaper he once worked at, El Siglo de Torreón, was shot at several times during a cartel turf battle. He remembers the first attack, in 2009, when he got a call just past midnight.

“I was actually getting ready to go to bed when the night editor called me and said, ‘Ya nos llegaron’ — they got to us.”

Gunmen had shot at the building, shattering the glass at the entryway. No one was injured.

Garza still reports on local politics, the economy, fluctuations in local crime. But he will no longer go deep on organized crime and drug trafficking.

“No, no, no,” he said. “If I got into organized crime and biz networks, first, I would have to send my family out of here, and then start doing the investigation, and then get the hell out.”