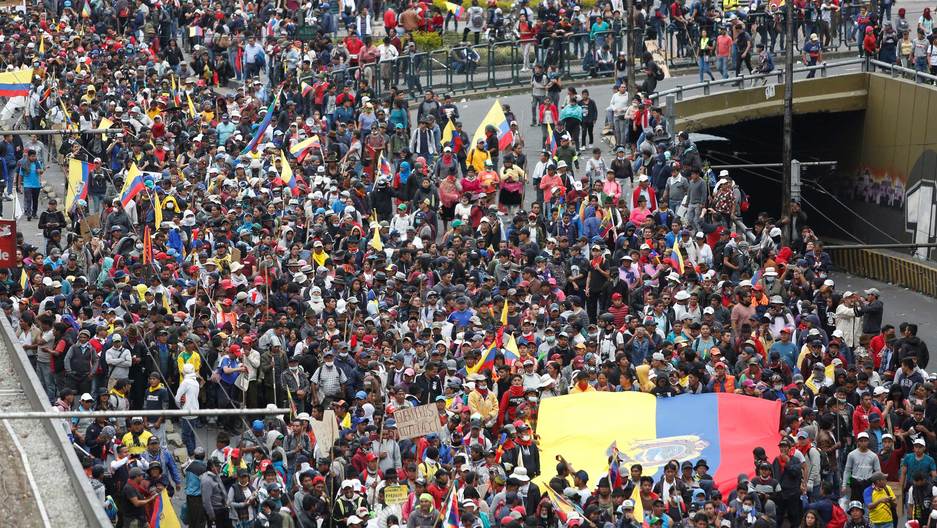 Indigenous-led protesters marched by the thousands during a national strike on Wednesday after President Lenin Moreno refused to step down or overturn anti-austerity measures that have triggered the worst unrest in a decade.

In some places, masked youths hurled stones and sticks at police who fired teargas back, though the wider demonstrations were mainly peaceful. In Quito, several people fell injured, witnesses said, as helicopters buzzed downtown.

"Our flag is red, like the blood of the working class!" chanted marchers in Quito, beside graffiti against President Lenin Moreno and the International Monetary Fund (IMF).

Protests erupted in the Andean nation of 17 million people a week ago when Moreno cut fuel subsidies as part of a package of measures in line with a $4.2 billion IMF loan.

"What the government has done is reward the big banks, the capitalists, and punish poor Ecuadoreans," said Mesias Tatamuez, head of the Workers' United Front umbrella union.

The main indigenous group CONAIE, which has mobilized some 6,000 members to Quito from outlying areas, said Moreno's government was behaving like a "military dictatorship" by declaring a state of emergency and setting an overnight curfew.

Protesters barricaded roads in various parts of Ecuador from Wednesday morning with debris, while security forces themselves blocked a major bridge in Guayaquil to thwart protesters. 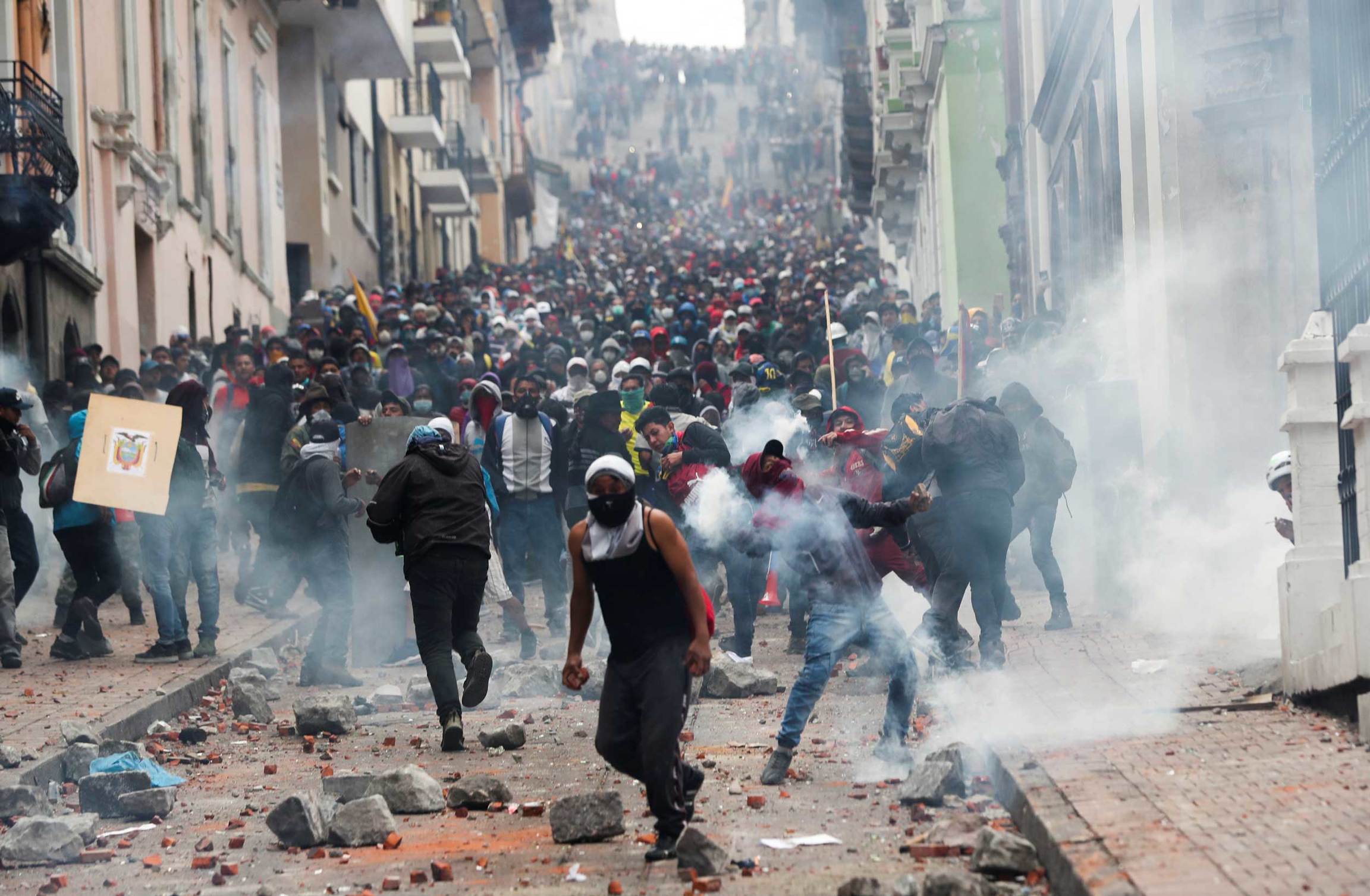 Demonstrators clash with security forces during a protest against Ecuador's President Lenin Moreno's austerity measures in Quito, Ecuador, on Oct. 9, 2019.

Moreno, 66, who succeeded leftist leader Rafael Correa in 2017, has relocated his government to Guayaquil where there has been less trouble than in Quito.

The demonstrators' main demand is the withdrawal of the fuel subsidy cut, which has sent transport and food prices soaring, though some were also urging Moreno to quit.

For days, protesters have been marching and barricading roads with burning tires, while police in armored vehicles have responded with water cannon and gas.

"Moreno out!" and "Police murderers!," some demonstrators shouted on Wednesday.

Authorities have arrested nearly 700 people in a week of unrest, and dozens of police officers have been injured.

One man died after he was hit by a car and an ambulance could not reach him amid the chaos, while another two people fell off a bridge during protests, with some unconfirmed reports that they died.

Oil Minister Carlos Perez said the OPEC member nation had lost 232,000 barrels of production from the unrest, worth more than $12.5 million, after protesters entered some fields.

Soldiers were helping state oil company Petroamazonas retake control of the important Sacha field, the ministry said, but half a dozen others remained closed.

Ecuador bond yields jumped above 8% in an adverse market reaction to the unrest.

The government hopes mediators can help and is promising measures to offset prices rises, including extra welfare benefits for the poor and credits for farmers.

Vice President Otto Sonnenholzner said a dialogue had begun with the Indigenous and union movements, supported by the United Nations, Catholic Church and university rectors.

"We're talking and we have made some advances," he told reporters, blaming "paid gangs" for the disturbances.

Moreno has accused former friend, mentor and boss Correa of seeking a coup with the help of fellow socialist President Nicolas Maduro in Venezuela. But no evidence has been given.

Moreno had enthusiastically backed Correa during his decade-long rule, serving as his vice president, but broke with him after winning election and moved economic policies to the right.

From Belgium where he lives, Correa has been applauding the demonstrators but scoffed at accusations of seeking a coup. Maduro, himself immersed in economic crisis in Venezuela, also denied involvement in Ecuador.

Moreno has support from the business elite and the military appears to remain loyal, but his popularity is less than half of what it was two years ago and he knows that indigenous protests helped topple three presidents before Correa.

"I feel betrayed by Moreno," said printer and father-of-eight Luis Calvopina, 53. "I don't want him to quit, but I do want him to reverse this stupidity."