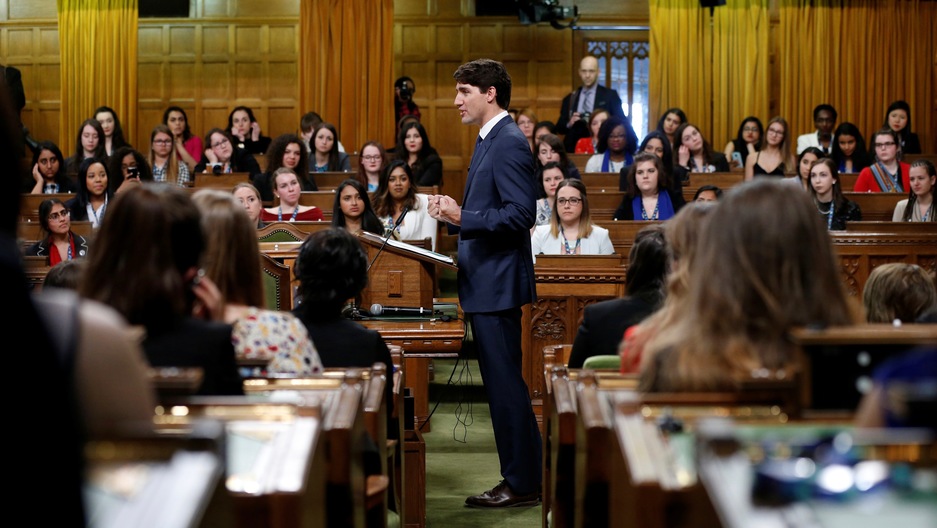 Canada's Prime Minister Justin Trudeau speaks during the Daughters of the Vote event, as part of International Women’s Day, in the House of Commons on Parliament Hill in Ottawa, Ontario, Canada, March 8, 2017.

Gender equity is a big issue in Canada’s upcoming election, in part because Prime Minister Justin Trudeau made feminism a cornerstone of his first campaign. Back then, when a reporter at a press conference asked him why, Trudeau replied simply: “Because it’s 2015.” It became an iconic moment for Canadian voters.

In the following four years, Trudeau and his Liberal Party championed pay equity. They increased support for child care aid for low-income families, and Trudeau appointed a Cabinet that was half female.

“I think that was an important step forward that was particularly significant to voters who care about equality in public life,” said Sylvia Bashevkin, a political science professor at the University of Toronto. “But I think that the Liberals have run up against the problem of setting a high bar, high expectations.”

Because, she said, Trudeau failed to meet those high expectations earlier this year when his government was rocked by a scandal. Canada’s first Indigenous attorney general, Jody Wilson-Raybould, alleged Trudeau and others inappropriately pressured her to protect a construction company in a corruption trial. She was demoted, and then she resigned. Indigenous Services Minister Jane Philpott also resigned in solidarity.

The prime minister responded on April 3: “Jody Wilson-Raybould and Jane Philpott are no longer members of the Liberal caucus,” he announced, expelling the women from his Liberal Party, and arguing they had tried to undermine his leadership.

“The treatment of Jodi Wilson-Raybould and Jane Philpott — that story has stuck in the craw of members of the public to quite a remarkable extent.”

“The treatment of Jodi Wilson-Raybould and Jane Philpott — that story has stuck in the craw of members of the public to quite a remarkable extent,” Bashevkin told The World. “I think a lot of them are very disappointed with the Liberals, but that's not to say that they're not willing to go out and vote because older voters in Canada tend to have higher voter turnout rates and are often willing to vote strategically in order to block one party from securing power.”

The same day Trudeau expelled the women, he went on to speak at the House of Commons in Ottawa to participants of a program called Daughters of the Vote. It brings 338 young women — one for each of the federal ridings or electoral districts — from across Canada to encourage interest in government. As Trudeau welcomed them, a few dozen stood up and turned their backs to express their outrage at Wilson-Raybould’s and Philpott’s expulsions. Hope Tuff-Berg of Ontario was one of them.

“This is an important issue to me because their bravery, their courage, and really, the way they stood up for justice represents ministerial responsibility that we haven't seen, I feel, very often in Canadian politics,” said Tuff-Berg, a political science major who started a nonprofit that encourages young people to vote.

The Conservative candidate for prime minister, Andrew Scheer, also addressed Daughters of the Vote delegates that day in the House of Commons.

“It’s easy to say, ‘Add women, change politics.’ But that’s not enough,” he said. “When strong women stand up and speak the truth to power, how do we treat them? That’s an important question that Canadians are asking right now.”

Some delegates walked out during Scheer’s speech, including Asmaa Ali, a nursing student from Alberta. She worries about his stricter immigration platform.

“Strategic voting sometimes feels like the only way that I'll still be able to continue on and maybe keep the services that my family needs,” Ali said, “or still hope that we'll have a chance that maybe a family member will be able to immigrate here.”

Those events at the House of Commons got widespread media attention that raised the profile of young female voters. Young voters turned out in historic numbers for Trudeau in 2015, and in the upcoming election, for the first time ever, millennial voters are set to make up the biggest voting bloc.

Polls show that Trudeau and Scheer are in a close race. Other candidates are running far behind, even though Trudeau recently suffered another scandal when images surfaced of him wearing blackface as a teenager and in his 20s. But by far the biggest issue for many Daughters of the Vote participants is climate change. This year, Trudeau greenlighted a pipeline expansion opposed by environmentalists and some Indigenous groups.

“I think that's really important to take a stand in this election on climate change and the lack of action [by] Trudeau's government. This is part of a movement, and the Green Party is kind of getting a new wave of supporters — young supporters particularly.”

“I think that's really important to take a stand in this election on climate change and the lack of action [by] Trudeau's government,” said Lila Mansour, a delegate from British Columbia who’s studying economics and has been door knocking for her local Green Party candidate. “This is part of a movement, and the Green Party is kind of getting a new wave of supporters — young supporters particularly.”

For one of the conservative Daughters of the Vote delegates, Hannah Dawson-Murphy of Nova Scotia, jobs and taxes are the big issues. She has already run for local office, lost and plans to run again.

“There has never been anybody to tear me down within my own party, and I think that is something extraordinary for a young woman to experience,” Dawson-Murphy said, adding that, unlike Trudeau’s Liberals, she believes the Conservative Party supports women who run for office.