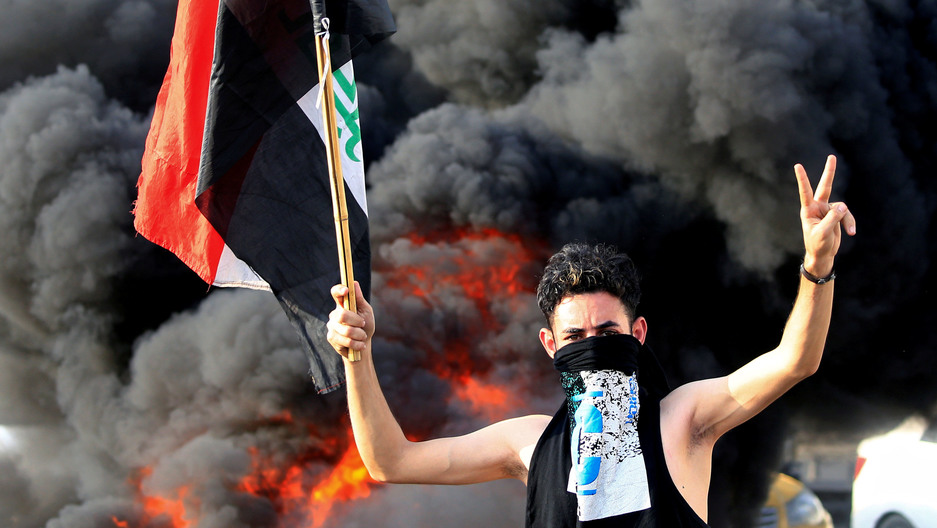 A demonstrator gestures as he stands close to burning tires blocking a road during a protest over unemployment, corruption and poor public services, in Baghdad, Iraq, on Oct. 2, 2019.

An internet blackout and a government-imposed curfew didn’t stop protesters from taking to the streets in Iraq on Friday.

People have gathered in Baghdad and several other cities across Iraq over the past three days to protest corruption, unemployment and a lack of basic services. At least 44 people were killed, news services reported.

"People want to bring down the regime," one anti-government chant went, echoing the slogans of the Arab uprisings in Syria, Tunisia and other countries.

Thiyaa Abbas, a 28-year-old resident from Diyala, a province just north of Baghdad, told The World he and his fellow protesters in Baghdad were fed up with poverty, corruption and injustice.

Unemployment in his province is rampant, he added, and residents feared ISIS would take advantage of security gaps in the area to make a comeback.

Abbas left Baghdad on Wednesday and returned to Diyala, for fear of his personal safety.

The protests gained momentum after a popular army commander was fired last week, said Mike Fleet, senior researcher at the Institute for Governance, a Canadian nonprofit.

Lt. Gen. Abdul Wahab Al-Saadi became a national hero in Iraq, and especially Mosul, for his role in the campaign to liberate the city from ISIS. A Shiite commander from southern Iraq, Al-Saadi is now a household name in Mosul.

“He became a symbol,” said Fleet. “There is a statue of him in Mosul which has now been ordered removed,” he added.

“As soon as he was removed [from his post], there were protests in Mosul about it and then the protesters in Baghdad picked him up as a broader symbol of the internal corruption and politicking amongst the political class,” he said.

Iraqi security forces have responded to the protests with force. So far, at least 44 protesters were killed in violent scuffles, news services reported, and hundreds were injured.

On Friday, Iraqi security forces opened fire on the protesters, according to news reports.

One man got hit by a teargas canister. Another died right in front of him, Abbas, the protester from Diyala, said.

“The guy was targeted by the security forces with live bullets into his chest,” he said.

Abbas said that the protesters he saw weren't armed, but waved the Iraqi flag and chanted slogans in unison. 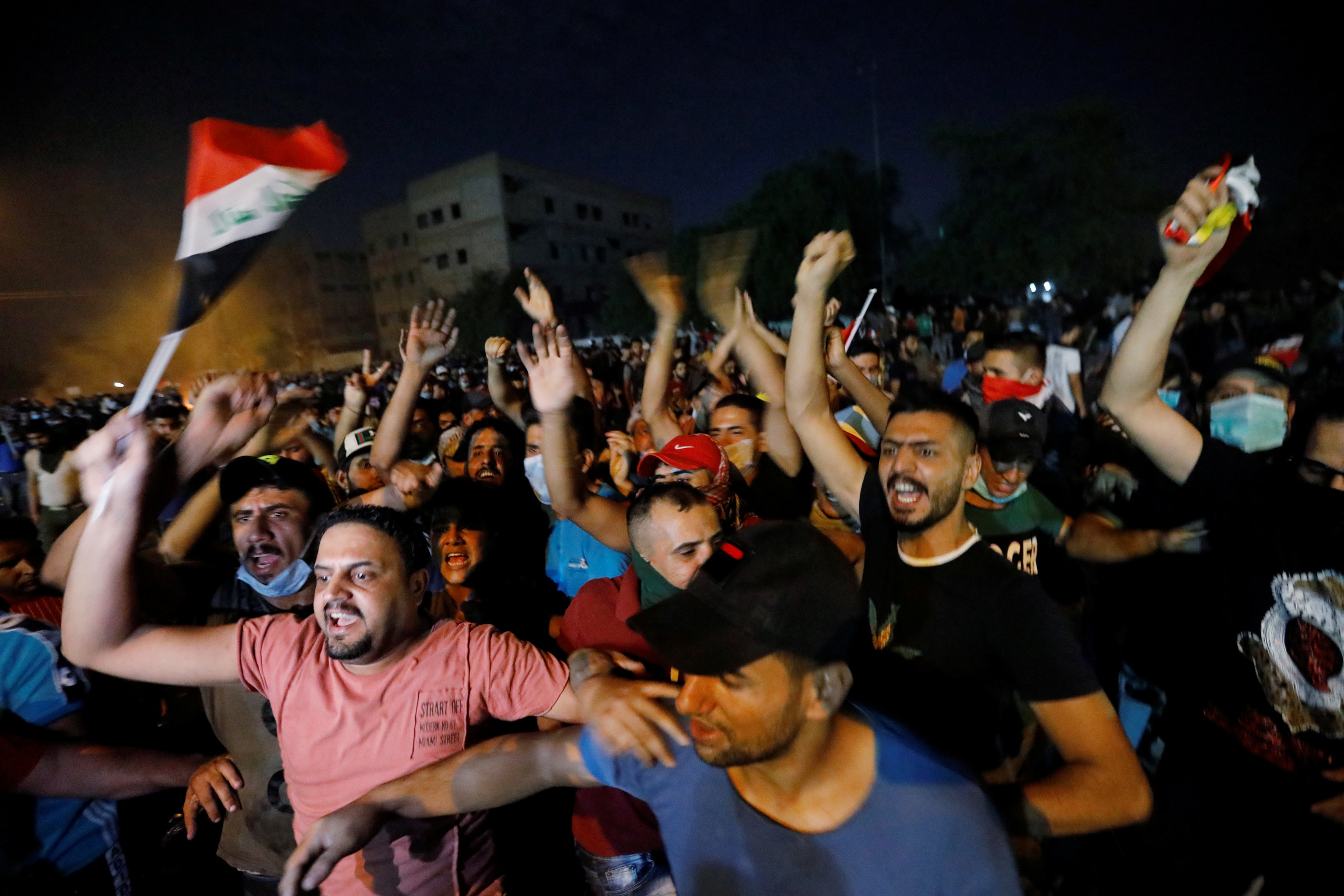 Demonstrators gathered at a protest during a curfew, two days after the nationwide anti-government protests turned violent, in Baghdad, Iraq, on Oct. 3, 2019.

Videos coming out of Iraq tell a similar story. One viewed by The World showed frantic protesters carrying a wounded man to safety.

On Thursday evening, the start of the weekend in Iraq, Prime Minister Adil Abdul Mahdi gave a televised speech. He pledged to provide “salaries” for families without an income, but didn't give any details on the possible implementation of such a proposal.

“This is not an empty promise,” he said, adding that the government has provided "direct lines of communication to demonstrators" so that they could speak directly with government officials.

Maria Fantappie, senior adviser at the International Crisis Group, a think tank, told The World Iraq is no stranger to civil unrest.

“This is just another cycle of demonstration where predominantly young Iraqis take the streets and demonstrate against the corruption, against poor governance, but, more largely, this is a protest against a political system, which they feel they are not a part of,” she said.

Related: Early marriage figures for Iraq are startling. Child advocates worry it could rise even more.

Last year, for example, people in Basra, a city in southern Iraq, took to the streets for months. They protested a shortage of clean water and electricity.

Fantappie said eventually the government responded to their plight. Conditions improved — somewhat. The experience led young Iraqis to conclude that the street is where they can get their voices heard.

“The culture of demonstration that has been introduced has become really a key political tool for the larger section of the population, which are largely young — people who actually use Facebook and social media, who choose to vote through demonstrations in some ways,” Fantappie said.

Fleet, from the Institute on Governance, said he saw at least one major difference between prior protests and this weeks’ demonstrations.

"The way the government reacted with such a heavy hand — with water cannons, with sound grenades, with live and rubber bullets — has propelled the momentum of these protests,” he said.

Abbas said he and other protesters organized gatherings via Facebook and WhatsApp. But now that the authorities have shut off the internet in most parts of Iraq, he finds it hard to connect with his friends. And while he said that he was worried about their safety, he would continue to protest until real change occurs.

Iraqi President Barham Salih’s tweet on Tuesday that underscored Iraqis’ right to protest, and his government’s plans to create more jobs for youth, did not convince Abbas.

“Those promises we have heard a lot, and they are all lies,” he said.