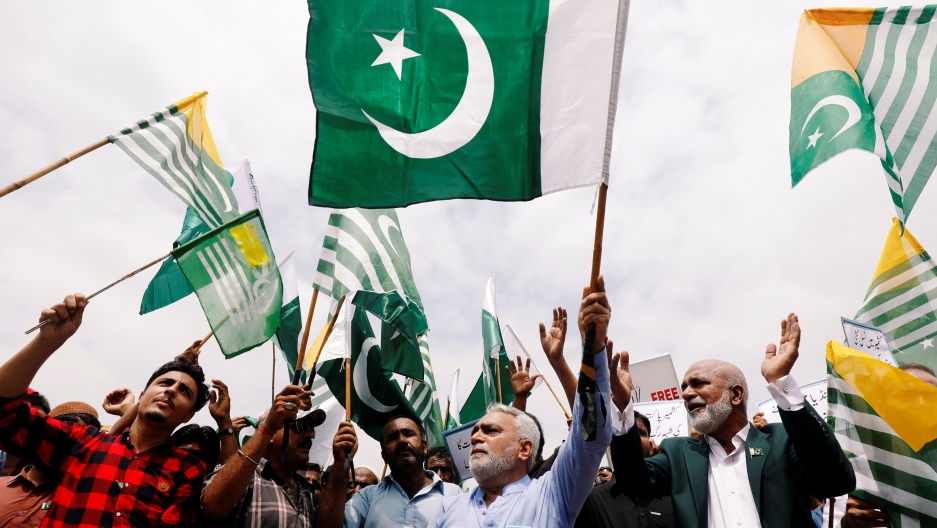 People carry Pakistan's and Azad Kashmir's flags and chant slogans during a countrywide "Kashmir Hour" to express solidarity with the people of Kashmir, in Karachi, Pakistan, Aug. 30, 2019.

It's been almost two months since India moved to integrate the disputed territory of Jammu and Kashmir more closely into India proper by stripping it of its special status.

Kashmiris, who are mostly Muslim, are furious. Pakistan sees itself as their protector — and it's talking about war with India. Both nations are nuclear-armed powers, and both are friends of the United States.

Sardar Masood Khan is the president of Pakistan-administered Jammu and Kashmir, known as Azad, or Free Kashmir. He spoke with The World's host Marco Werman on how the situation might play out.

Related: Barricades and books: Life in a restive Kashmir neighborhood 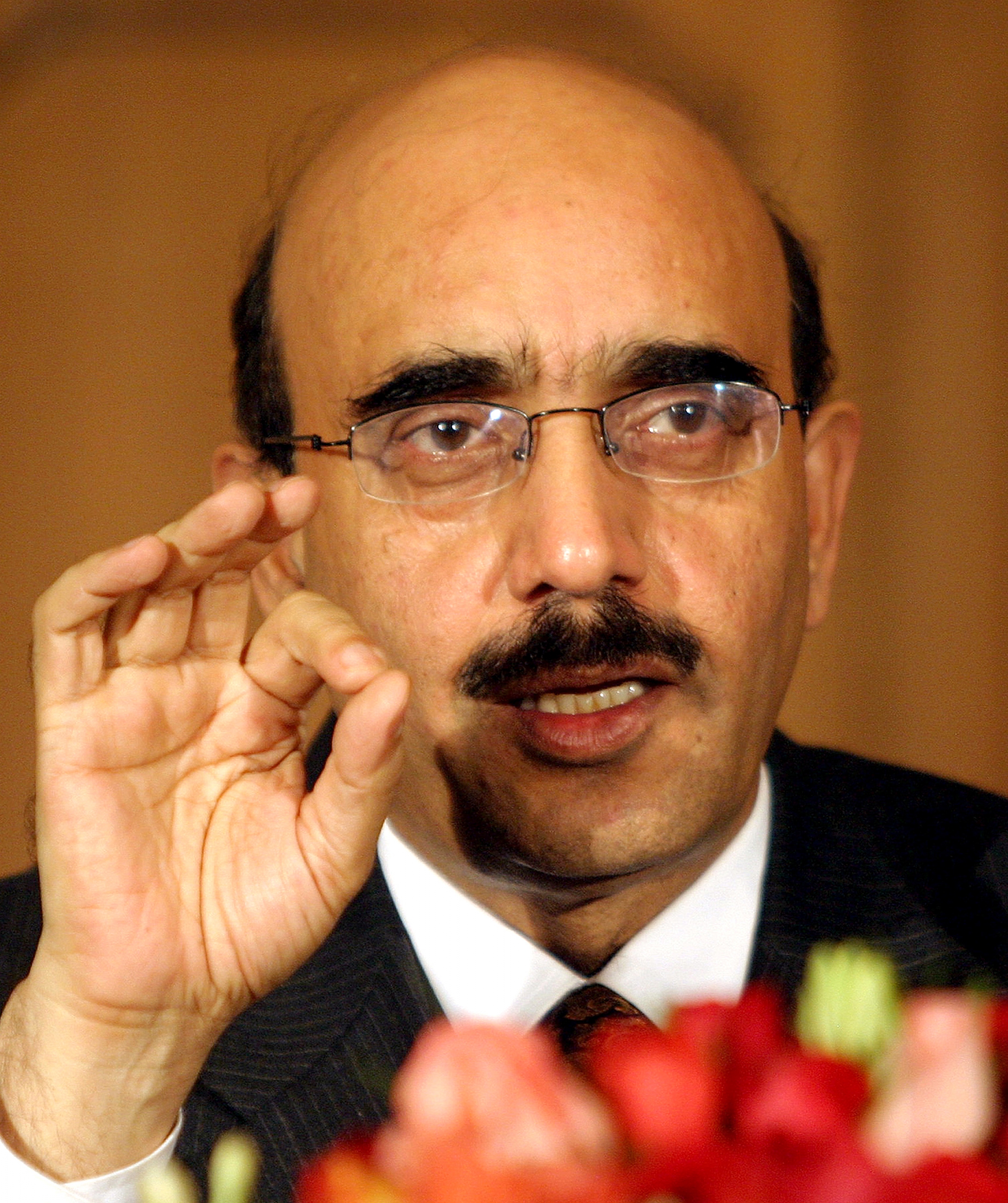 Sardar Masood Khan, president of the Pakistani side of divided Kashmir, gestures during a news conference at Pakistan's foreign ministry in Islamabad, Dec. 23, 2004.

The World: Mr. President, thank you for being with us. Let me ask you, first of all, if you could determine the future of all Kashmir, what would you want to see? Do you think Kashmir should be free and independent again?

Khan: We would like to see a referendum held under the auspices of the United Nations. There were nearly a dozen resolutions, which were passed way back in the 1950s, and they remain unimplemented. And these resolutions are important because they recognize Kashmiris as the key party to the dispute. I mean, there are three parties: India, Pakistan, and the people of Jammu and Kashmir. And the people of Jammu and Kashmir have to decide their future.

What's been your reaction to India's unilateral decision in August to integrate Indian-administered Kashmir more closely into India?

We were all outraged. My own personal reaction was one of condemnation of Indian actions because they have unilaterally tried to alter the disputed status of the territory recognized as such by the United Nations Security Council resolutions and under various bilateral agreements. So, I think these precipitous steps were meant to integrate this territory to the Indian Union, which is unlawful and illegal. And then I used the word colonization, because on that day, they also announced that Hindus from all over India would be brought to Kashmir and settle there. These would be illegal settlements, like you have in the West Bank or the Gaza Strip. So, we condemn all these steps, and they have no legal validity whatsoever.

Well, India calls it freedom of movement. I mean, you're using some pretty strong language: invasion, occupation, you call it illegal. Prime Minister of Pakistan Imran Khan warned last week that war was still possible over this Indian crackdown in its part of Kashmir. So, how concerned are you about war? Is your administration making any preparations for the worst?

We are making preparations because we have been threatened directly. An attack on the Indian-occupied Kashmir is an attack on Azad Kashmir and Pakistan. There's a potent threat of war, and we are preparing to defend ourselves.

Mr. President, you've spent your career as a diplomat serving Pakistan, and some in India say your administration in Kashmir is a puppet of Pakistan and you're doing their bidding, as you certainly asserted in that last answer. How do you respond to criticism like that?

Well, we have a relationship with the Federation of Pakistan. The agreement between Azad Kashmir and Pakistan dates back to 1949. So, we have all the trappings of a state. Four areas, or four matters, have been assigned to the Federation of Pakistan, and these are defense, foreign affairs, and third is currency, and fourth is matters related to the United Nations. We work within that framework.

So, let me let me interrupt, if I may. Because if Kashmir's a quasi-sovereign state, then how come the pro-independence party, the Jammu and Kashmir Liberation Front, is not allowed to take part in elections?

No, that's not true. Because let me tell you that there are two parts of Jammu and Kashmir right now outside Kashmir and the occupied territory. In the occupied territory, India has banned JKLF, Jammu and Kashmir Liberation Front, which is a pro-independence party and is headed by Mr. Yasin Malik who is in Tihar jail in Delhi where he's being tortured. So, the leader is under detention, and the party is banned. In Pakistan, the JKLF is not banned, and its leader and its political activists are free to go wherever they like — in the bars, in the universities, in the press clubs — and they put across their point of view very freely. There is tolerance for dissent in Azad Kashmir and in Pakistan.

But those people are unable to contest elections in Azad Kashmir.

Of their own choice because their numbers are small.

Now, India also says terrorist groups are based in your territory, supported by Pakistani intelligence. What is your view of the, I have to say, many terroristlike attacks in Indian-occupied Kashmir?

Well, I think that the version or interpretation of what terrorism is, is dated and their accusations are dated, also. I would say that we'd never call these people fighting for the realization of the right to self-determination terrorists — we always call them freedom fighters inside the Indian-occupied Kashmir because they were resisting Indian terrorism and Indian brutalization. And the number is very small according to India itself. I mean, the figures that they released last year in December indicated that the total number of militants, as they call them, and Indigenous militants not coming from across the sea, was about 250. And to tackle those 250 militants, they've deployed 900,000 troops. As a matter of fact, this is not a threat to them. The real threat is this big population, which has rejected India's rule and writ altogether.

But let me tell you that this accusation of terrorists being trained and being sent across the Line of Control — these are false and fictitious. There are no terrorist camps in Azad Kashmir, and in fact, there's another factor: Indians themselves, Indian occupation forces, also brag about this fence ... a 540-kilometer fence. And they say that this barrier cannot be penetrated. So, I think that way back in the 1990s, the freedom fighters from Azad Kashmir did go across and tried to defend their brothers and sisters there. But this practice was ceased after 2004. So, I think that this accusation has no substance. They say this because they want to speak to the world's concern about terrorism worldwide.

Absolutely none. I can say that with authority and full authenticity.

Mr. President, Kashmir was partitioned 72 years ago. Have you ever had a chance to visit Indian-administered Kashmir?

I wish I had. But I think that the Indian attitude has always been very hostile, and I wasn't sure that they would give me permission to visit that part of Jammu and Kashmir.