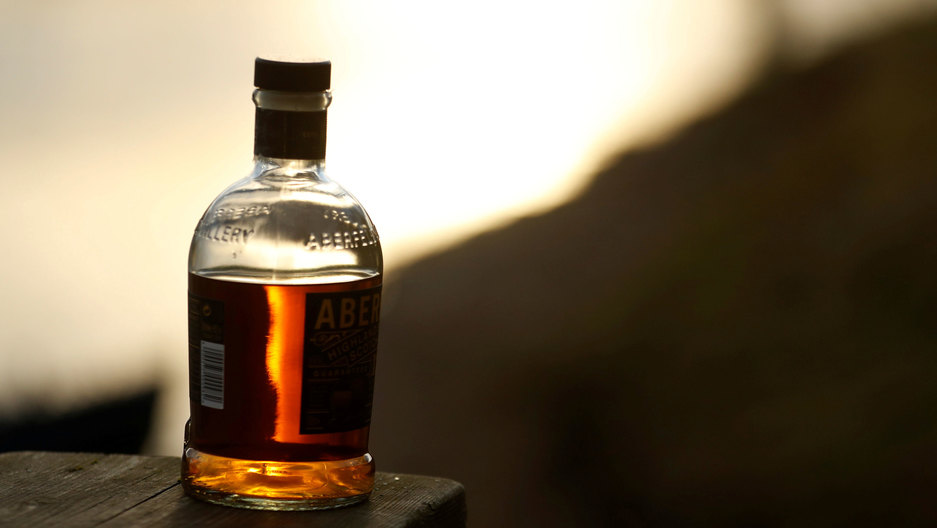 A bottle of whisky is left on the bank as fishing starts on the opening day of the salmon fishing season on the river Tay near Meikleour, Scotland, Britain, on Jan. 15, 2019.

US President Donald Trump hailed a "nice victory" on Thursday after the United States got the green light to place tariffs on European Union goods in a row over EU aircraft subsidies.

But Wednesday's decision by the World Trade Organization (WTO) left Scottish whisky makers, Spanish winemakers and French cheesemakers fuming as the US tariffs targeted products from countries in the Airbus consortium.

Engineers in Germany worried that the row over subsidies granted to the European planemaker was leading to "a table tennis match" over trans-Atlantic tariffs, and France warned of retaliation by the EU.

The WTO decision gave the United States the go-ahead to impose tariffs on $7.5 billion worth of EU goods annually in the long-running case.

Related: Economists to Trump: You're dead wrong on tariff revenues

The dispute darkens the global economic outlook, which already has the cloud of the US-China trade dispute hanging over it. Washington and Beijing have imposed tariffs on each other's goods worth hundreds of billions of dollars.

Trump said on Twitter the EU "has for many years treated the USA very badly on Trade due to Tariffs, Trade Barriers, and more. This case going on for years, a nice victory!"

Washington said that, after 15 years of litigation, it would impose 10% tariffs on Airbus planes, a move that could hurt orders by US airlines, and 25% duties on French wine, Scotch and Irish whiskies, and cheese from across the continent.

"If the American administration rejects the hand that has been held out by France and the European Union, we are preparing ourselves to react with sanctions," French Finance Minister Bruno Le Maire said.

Britain said it was seeking confirmation from the WTO that it had complied with the organization's rulings and should not face tariffs.

The Scottish Whisky Association said jobs and investment were at risk from a 25% tariff on single malt. Scotch whisky exports to the United States, the industry's biggest single market, were worth 1 billion pounds ($1.23 billion) last year.

"Despite the fact that this dispute is about aircraft subsidies, our sector has been hit hard," the association's chief executive, Karen Betts, said in a statement, urging restraint from both sides.

Spanish vintners said their wine would cost too much in U.S. stores if tariffs were confirmed.

"The tariffs will affect our competitivity," said a spokesman for CECRV, the association for producers of Spanish wines such as Rioja and Cava.

Spanish olives, British sweaters and woollens, and German tools and coffee were targeted, as well as British whisky and French wine.

Cheese from nearly every EU country will also be hit with the 25% tariffs, but Italian wine and olive oil were spared, along with European chocolate.

"Dairy products are going to be directly hit... we are going to fight for these measures to be delayed," said Michel Nalet, spokesman for France's Lactalis group, the world's biggest dairy firm, which makes butter and cheeses under the President label.

Related: Who's paying for Trump's tariffs? China, or American shoppers?

There was relief for some who had expected to be drawn into the row but were not.

Shares in European luxury goods, including British fashion brand Burberry, and drinks companies, such as France's Remy Cointreau, rose on Thursday, after the tariffs excluded cognac, champagne and leather goods.

The size and scope of the tariffs were reduced considerably from a $25-billion list floated by Washington this year that included helicopters, major aircraft components, seafood and luxury goods.

One person familiar with the case said the US Trade Representative (USTR) was deliberately not using the full extent of WTO-approved ruling to coax the EU into negotiations.

But the USTR also issued a warning.

"The US has the authority to increase the tariffs at any time, or change the products affected. USTR will continually re-evaluate these tariffs based on our discussions with the EU," it said.

Airbus and US firm Boeing, the world's two largest planemakers, have waged a war of attrition over subsidies at the WTO since 2004. The dispute has tested the trade policeman's influence and is expected to set the tone for competition from would-be rivals from China.