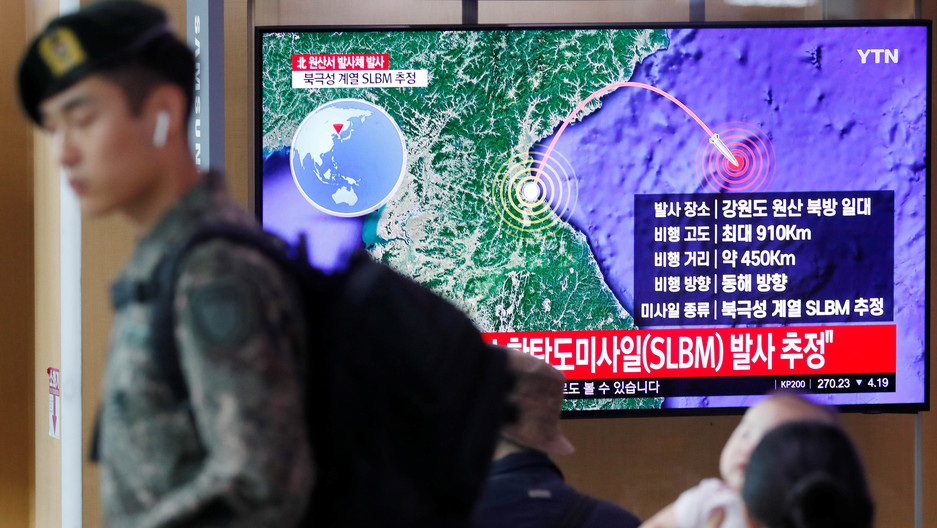 A South Korean soldier walks past a TV broadcasting a news report on North Korea firing a missile that is believed to be launched from a submarine, in Seoul, South Korea, Oct. 2, 2019.

Hours after announcing it would restart nuclear talks with the US, North Korea launched at least one ballistic missile Wednesday.

The talks this weekend could potentially end a months-long stalemate in negotiations since US President Donald Trump walked away from the second US-North Korea summit in Hanoi, Vietnam, this February.

Related: After no deal in summit, Washington rethinks sanctions against North Korea

The announcement from North Korea of yet another ballistic missile test did not come out of the blue. But it is a big concern as it comes in a worrying sequence of other tests involving missles and other projectiles. According to The New York Times, Wednesday's incident was the ninth such test since late July.

But Wednesday's test was especially alarming because the flight path suggested it was a missile designed to be launched from a submarine. Ground launches are easy to see — a submarine launch is not.

James Kim is a fellow at the Asan Institute for Policy Studies in Seoul, South Korea. He said has doubts about North Korea's submarine program.

"As far as we know, our understanding of the North Korean submarine is that it's relatively primitive, compared to the kind that the United States has," Kim said. "So we don't believe that they have the ability to travel a lengthy distance. But, nonetheless, you can never underestimate your adversary."

Kim spoke with The World's Marco Werman about prospects for negotiation between the US and North Korea.

Marco Werman: It's interesting, North Korea staged this missile test just a few days before another round of US-North Korea talks. What is Kim Jong-un's strategy here and what kind of message is he sending by going to a submarine-launched system?

James Kim: I think he's sending a very strong message that he's trying to get an advantage — some leverage — leading up to the working-level negotiations. Essentially, they're calling the time, they're calling the terms under which these negotiations will take place. Clearly, we saw the failure in Hanoi earlier this year. The North Korean demands for complete sanctions relief in exchange for marginal movements towards denuclearization was not going to be acceptable for President Trump. But perhaps the North Koreans may be willing to settle for something less than that, and they've recently stated that they're more interested in security guarantees for the regime than their interest in lowering sanctions. So, it sounds like the North Koreans' positions have shifted a bit.

With John Bolton out as National Security Adviser and an acting adviser in the White House, what weaknesses do you see in Trump's North Korean negotiation team? Is there a likelihood that they just might settle?

There is a possibility here for a smaller, interim deal that could be a stepping stone towards a larger deal, where both sides can build confidence and trust in each other. So, I wouldn't discount the possibility of marginal changes here, where both sides can gain something. But this is very different than the kind of deal that the Trump administration had been talking about with John Bolton in the White House. He was calling for a deal that would lead to a complete denuclearization. So, we'll have to wait and see how the talks pan out.

Where is South Korean President Moon Jae-in with all of this? What options are available to him in South Korea right now with Trump and Kim Jong-un continuing this back and forth?

Related: Moon bets his legacy on meeting with Trump

James, it sounds like you're taking this all in stride there in Seoul. How worrying do you see this latest news personally?

Well, you know, we have not had a second Korean War after the signing of the armistice, and the US troops are still here, regardless of what President Trump has said. There are 28,500 American soldiers here. The bureaucrats at the State Department and the Defense Department [are] reassuring the South Koreans that US extended deterrence guarantees are still in place and [are] robust. So, we don't see much change here in terms of the overall situation, as far as the US-South Korean alliance is concerned — it's still in place, it's still working. As long as that doesn't change — putting aside some of these tests that every now and then North Korea conducts — I think the South Koreans have a relatively good feeling about the state of the alliance and the ability to deter any North Korean provocations.