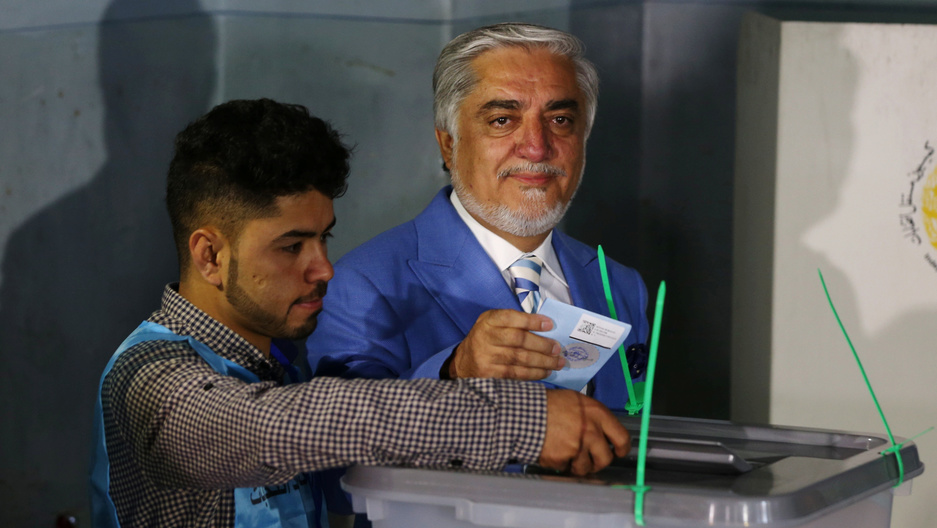 The front-runners for Afghanistan's presidency, incumbent Ashraf Ghani and chief executive Abdullah Abdullah, have both declared victory, echoing an election crisis five years ago when competing claims by the two men led to months of turmoil.

Afghanistan's Independent Election Commission is gathering votes from Saturday's election. If no candidate wins more than half, a runoff vote would be held between the top two.

"Our votes are the highest in the election, and the election will not go to the second round," Abdullah said at a press conference in Kabul on Monday.

Related: A hidden denial in the Afghan election

"The information that we have received show that 60 to 70% of people voted [for] us," Saleh was quoted by news outlet VOA as saying in a story on its website.

Ghani and Abdullah were also the top two candidates in the last election in 2014, leading to months of turmoil as both men accused each other of fraud. The United States finally stepped in, brokering a power-sharing deal under which Ghani became president and Abdullah accepted the new post of chief executive.

Abdullah was also involved in a months-long election dispute in 2009 when he challenged the victory of then-incumbent Hamid Karzai. Afghan presidential candidates have a pattern of assembling competing coalitions of regional and ethnic chieftains, and accusing rival camps of organizing fraud in far-flung districts under the control of their supporters.

The chief executive of the electoral commission, Habiburrahman Nang, told a press conference that no candidate had the right to declare himself the winner before the results are tallied.

Preliminary results are not expected before Oct. 19 and final results not until Nov. 7.

Abdullah said on Monday he would accept only votes that were filed with biometric voter verification. Problems with scanning machines had led the commission to also accept votes without scanning fingerprints.

Foreign countries that have troops in Afghanistan are wary of yet another destabilizing election dispute.

Boasting of victory before the election commission has even counted votes is unhelpful, said Czech Republic Ambassador to Afghanistan Petr Stepanek, whose country has 350 soldiers in the US-led NATO force that supports the government.

"It's pushing the election commission into murky water. [The candidates] should respect the institutions," Stepanek said in an interview.

The winner would have a stronger position to conduct any negotiations with the Taliban aimed at ending the country's 18-year war.

Tight security ensured the election on Saturday was conducted in relative calm, with only small-scale attacks by the Taliban.

At least 2.2 million people voted, with more votes to be gathered, the commission said on Sunday.

Ballot boxes are being transported from remote areas to Kabul for counting. The process can be dangerous.

Thirteen election staff members have been kidnapped since Saturday by the Taliban, and 11 others were wounded on election day, election commission spokesman Abdul Aziz Ibrahimi said.

The Taliban said on Saturday that low turnout underlined that the election was illegitimate and that Afghan people do not accept "foreign imported processes."

The militant group threatened attacks leading up to election day, causing many voters to stay home.