The densely-populated, working class area in the main city, Srinagar, is a pocket of resistance to India's removal in early August of special status for Jammu and Kashmir, the country's only Muslim-majority state. 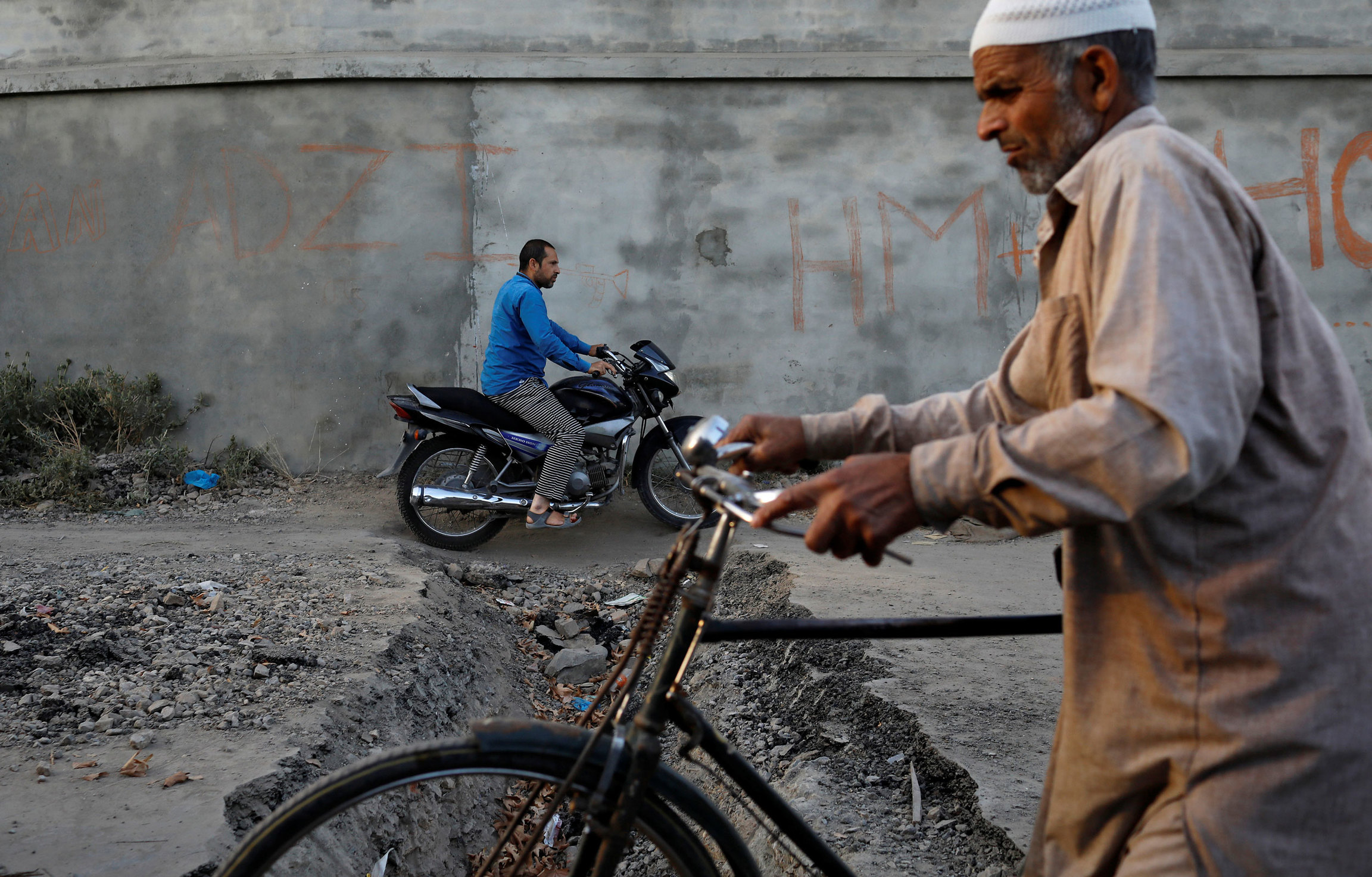 While some normalcy has returned to the region more than seven weeks after the crackdown began, there is little sign of an end to the standoff in Anchar, home to about 15,000 people. 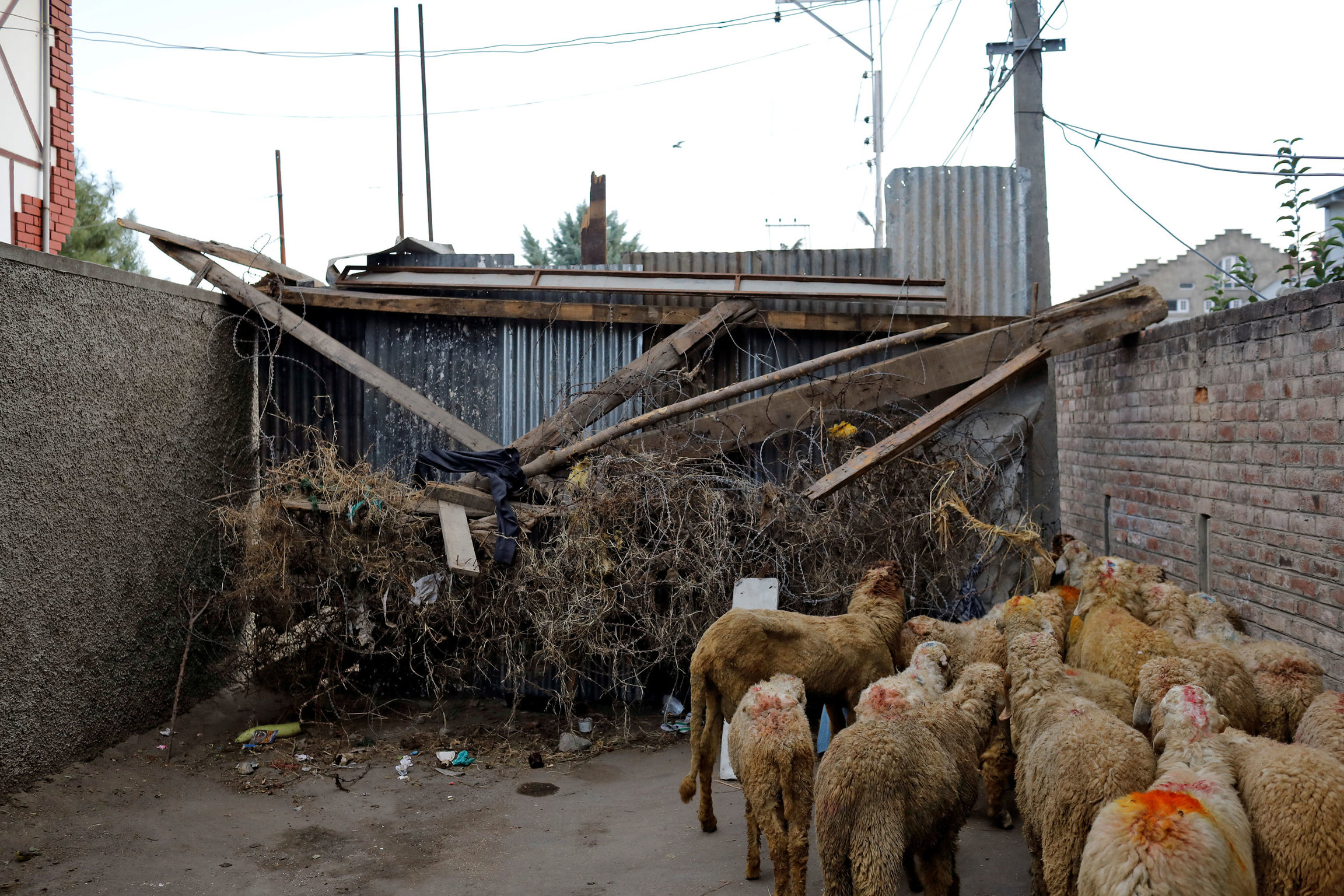 A herd of sheep pass through a barricade set up by the residents to prevent Indian security forces from entering Anchar neighborhood.

Entrances to the area are guarded by young people manning barricades made of tree trunks, electricity poles and barbed wire to keep the police out.

Laneways have been dug up to block security vehicles. 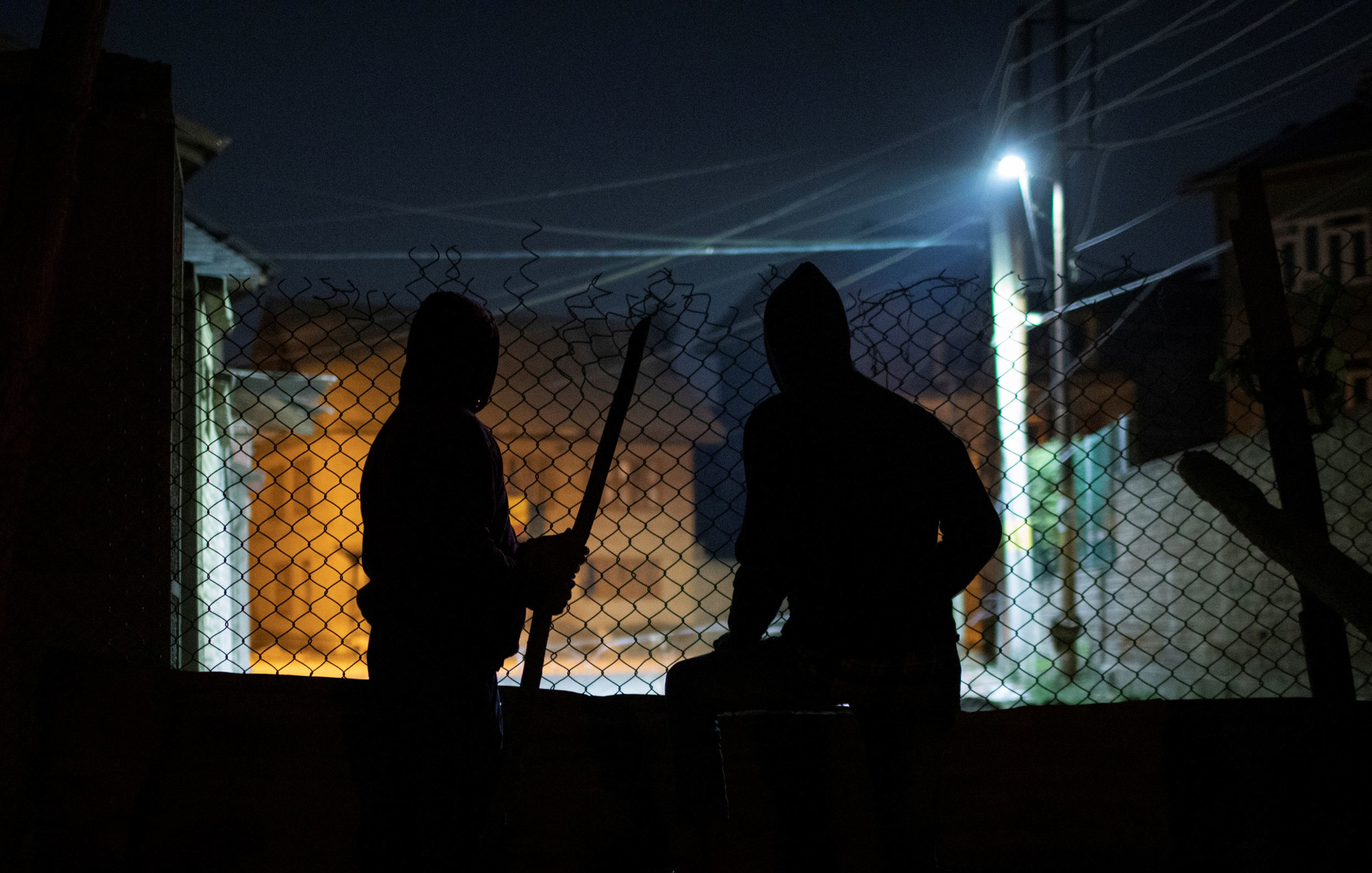 As night falls, groups of youths, many wearing masks and armed with stones and tree branches, are huddled around bonfires, sipping tea provided by neighbors.

"I am spending the night outdoors so I can protect my family and not let Indians, who have been committing atrocities on us, to enter," said Fazil, a 16-year-old student.

"There is no fear in me," he added, holding a thick tree branch as he watched the street from a checkpoint. 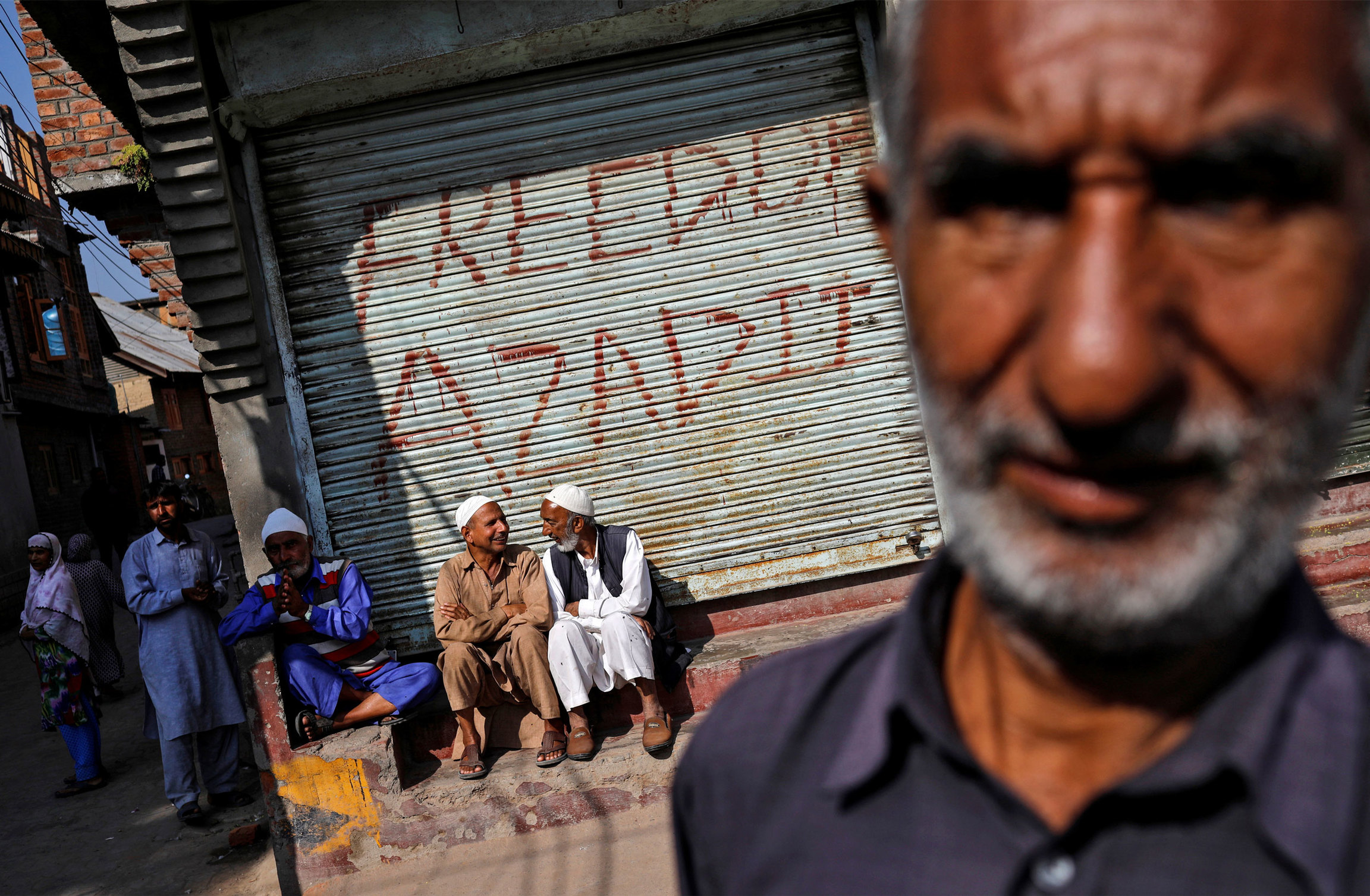 Kashmiri men sit in front of pro-independence graffiti sprayed on the shutter of a closed shop.

Prime Minister Narendra Modi has said Kashmir's special status, which allowed only residents to buy property and hold government jobs, restricted its development and encouraged a separatist revolt that has killed 40,000 people since 1989.

Indian authorities have arrested nearly 4,000 people since the decision provoked outrage in the region and inflamed tensions with Pakistan, which also claims the territory. 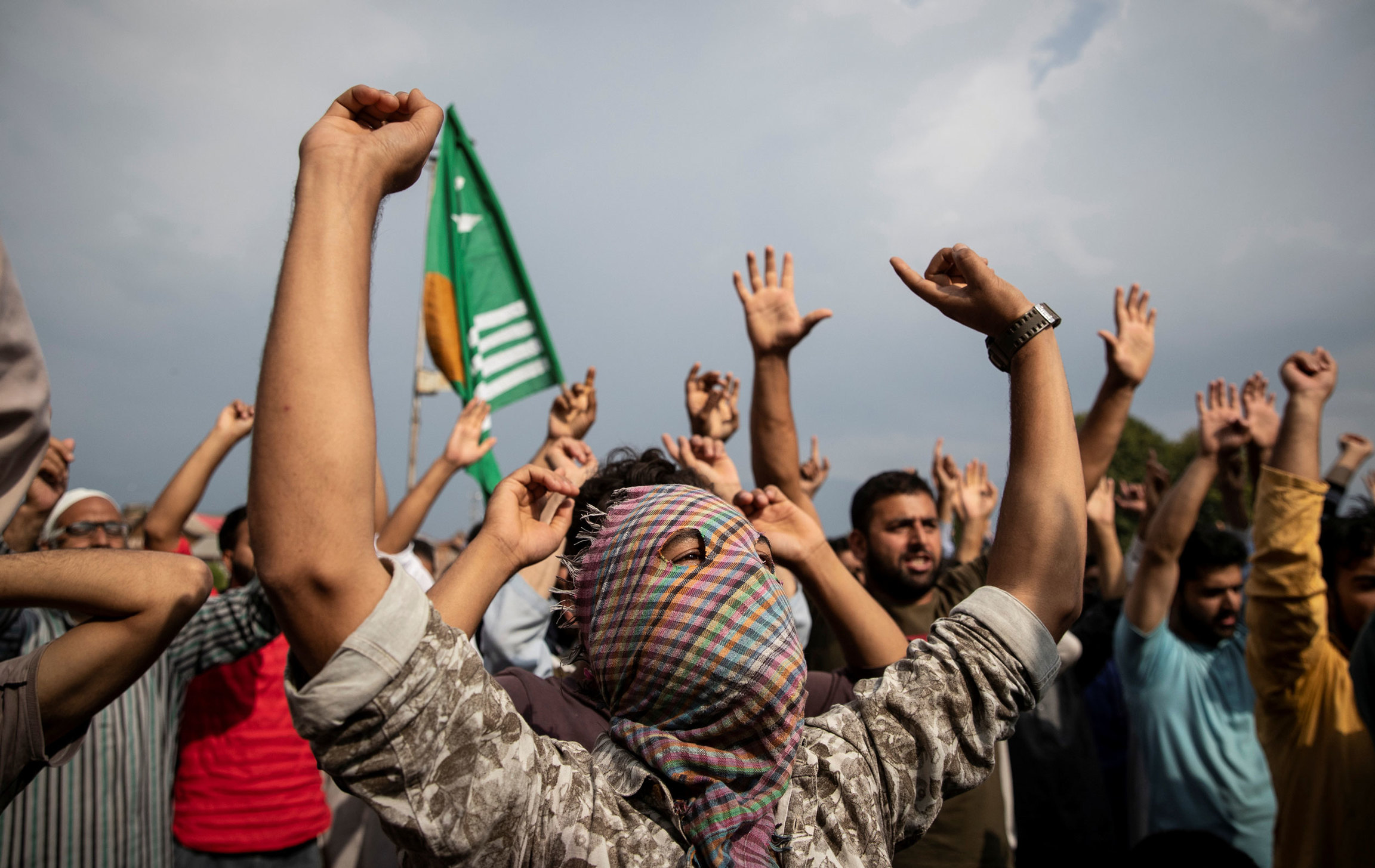 India cut internet and mobile services and imposed curfew-like restrictions to prevent protests. More than seven weeks later, some normalcy has returned and many of those detained have since been freed. 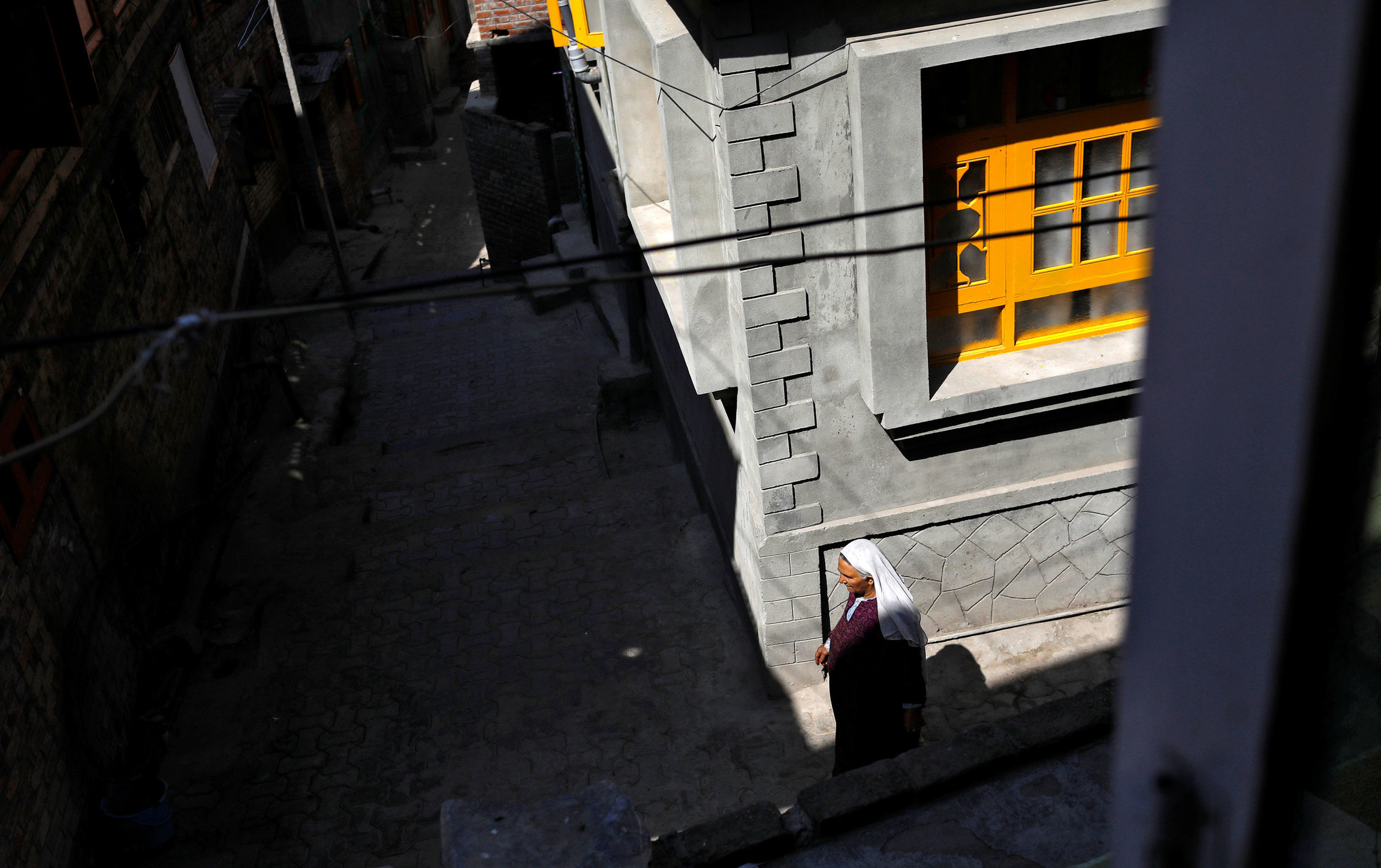 A Kashmiri woman walks through an empty street in Anchar.

Shops open briefly to allow people to restock supplies and traffic is back on Srinagar's streets. On some evenings, people stroll along the boulevard by Dal lake, framed by the Himalayas.

However, Anchar remains a no-go zone for security forces, and government services like schools are still shut in the area, prompting residents to come up with workarounds.

Four college students have set up a makeshift school in a three-room house to give lessons to 200 children for a few hours each day. They keep streaming in, the girls with their heads covered, books in hand from nursery rhymes to mathematics. 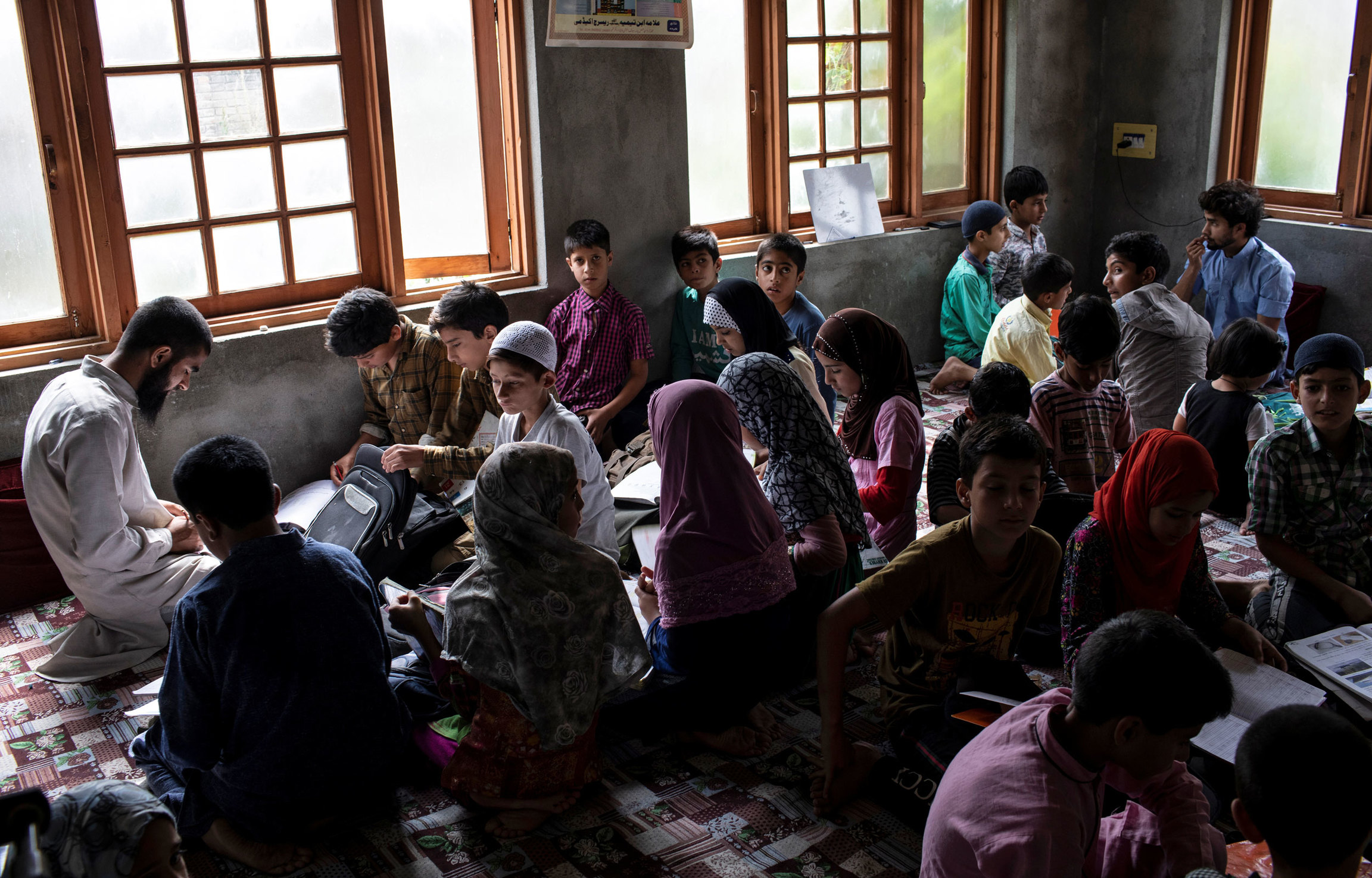 "The education of students in this locality is suffering because of the turmoil. We won't let our future generations suffer," said Adil, a college student turned teacher.

Another student teacher, Walid, said: "These children only see bullets and pellets every day." 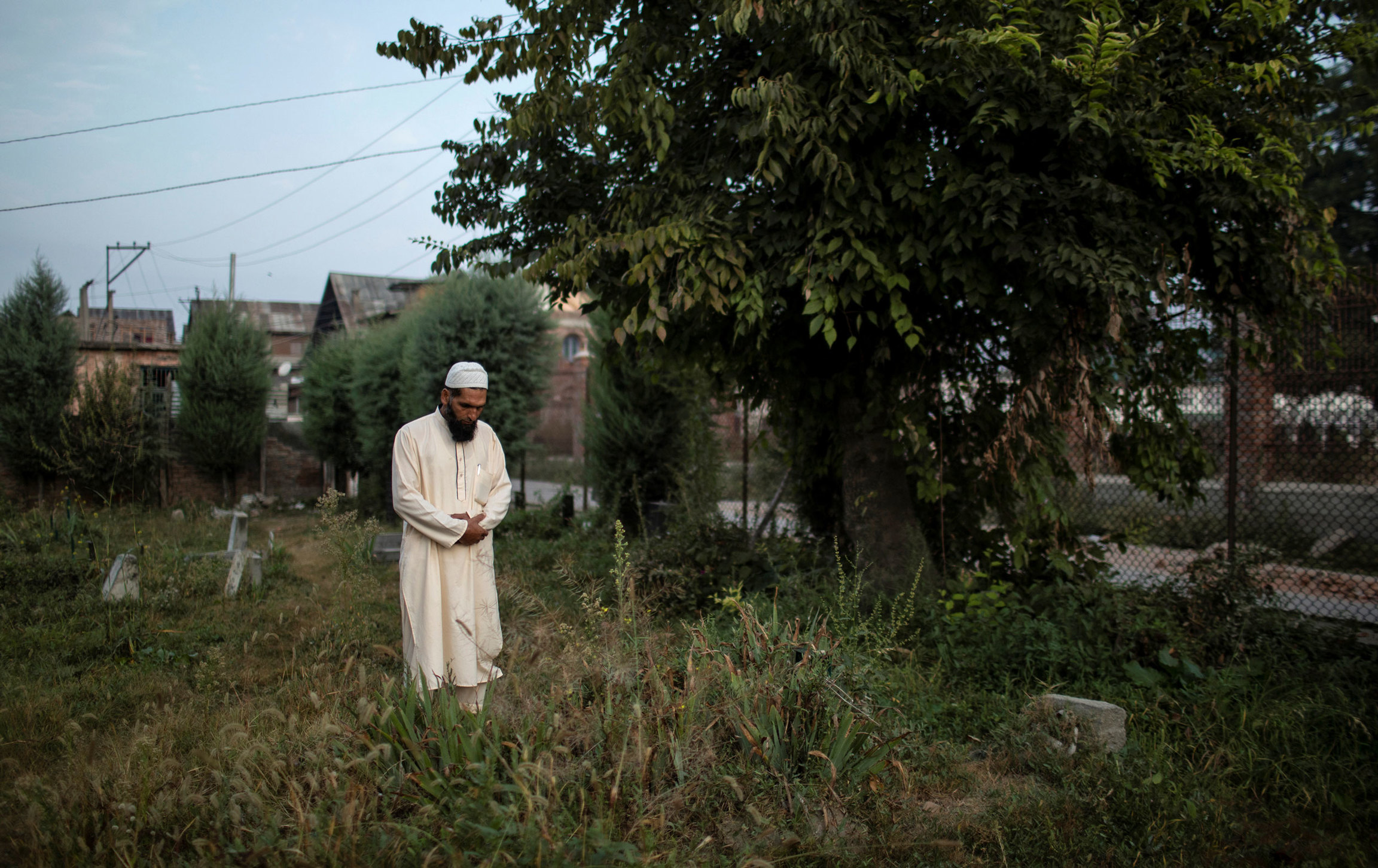 A Kashmiri man prays at a graveyard.

Other students are providing basic medical care so people need not go into other areas of the city for fear of arrest.

Rubina said her 15-year-old son was injured by pellets fired by security forces while he was returning home from Friday prayers. 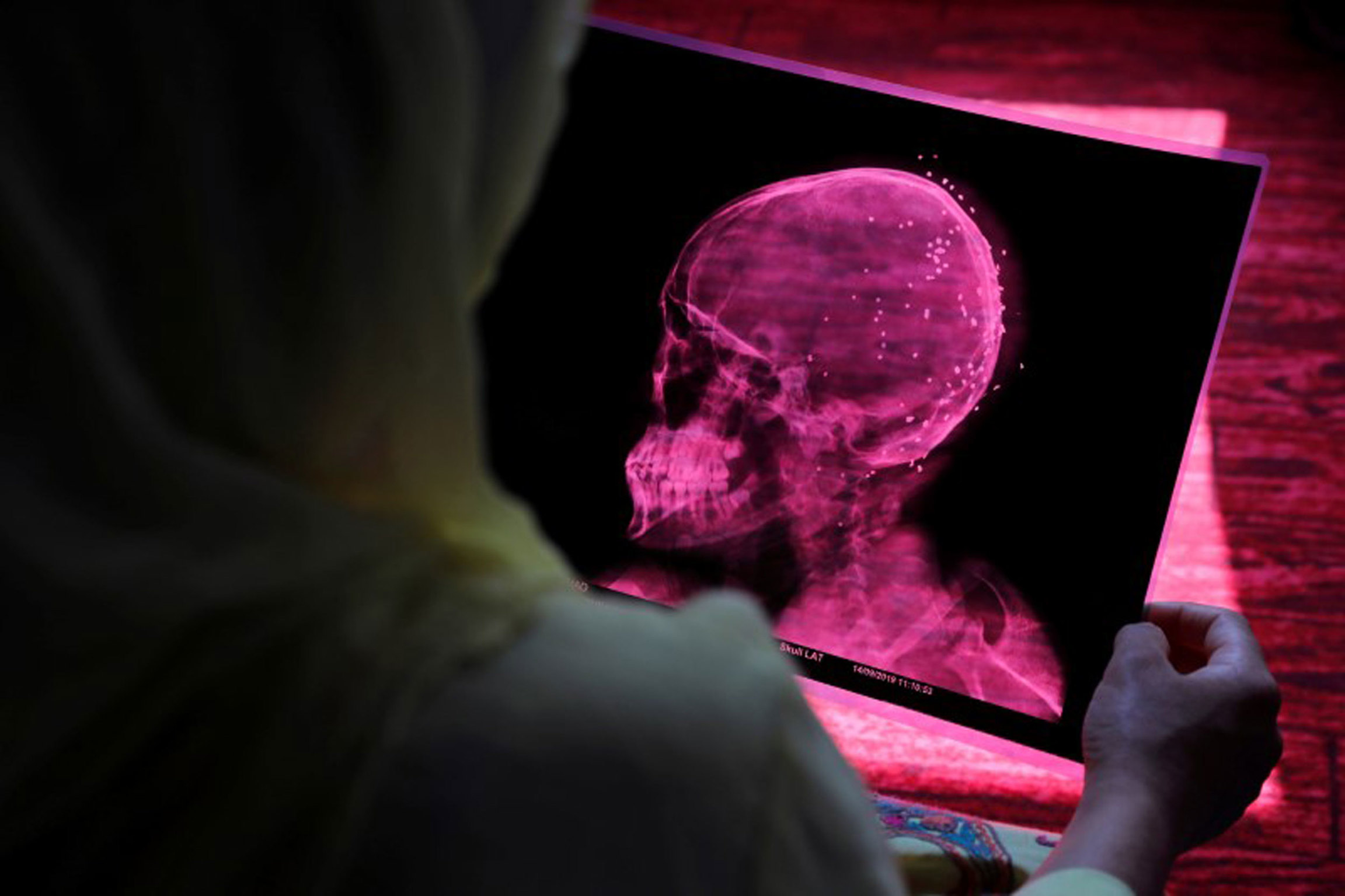 The boy's head is heavily bandaged and he hasn't spoken since the incident, but the family would rather treat him at home than take him to a city hospital, fearing he would be detained by police. 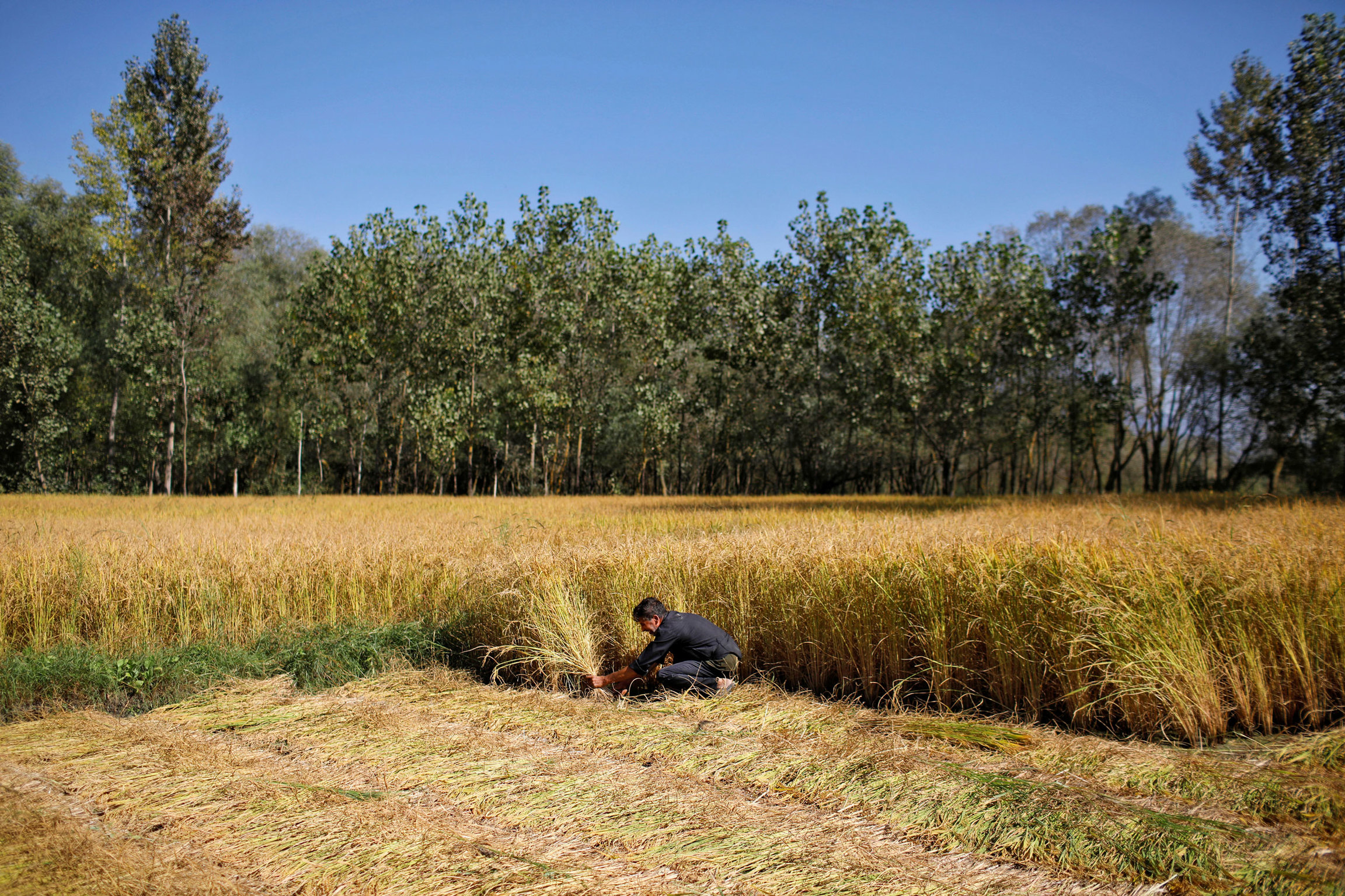 "If he has to go out for a change of bandage to the nearby government hospital, he will be accompanied by six or seven women, so they don't snatch him away," Rubina said.