In the age of internet, instant messaging and smartphones, a handwritten note still has the power to amaze — with an assist from technology.

That seems to be the lesson after an Alaskan man discovered a message in a bottle sent from a Soviet sailor 50 years ago.

Tyler Ivanoff, 36, a schoolteacher in Shishmaref, Alaska, was out picking berries and gathering driftwood for a fire for his family when he stumbled across a green bottle lying along the state's western shore early this month.

“I noticed that the bottle had a note in it. It was sealed really well. And when I opened the bottle and took out the message, I recognized that it was Russian handwriting.”

“I noticed that the bottle had a note in it. It was sealed really well,” Ivanoff said.

He showed it to his kids — who thought it might be a pirate treasure map.

“But when I opened the bottle and took out the message, I recognized that it was Russian handwriting.”

Ivanoff could make out a few words thanks to a high school Russian class he’d taken to get out of art requirements — but it wasn’t enough.

Naturally, he turned to social media for help. 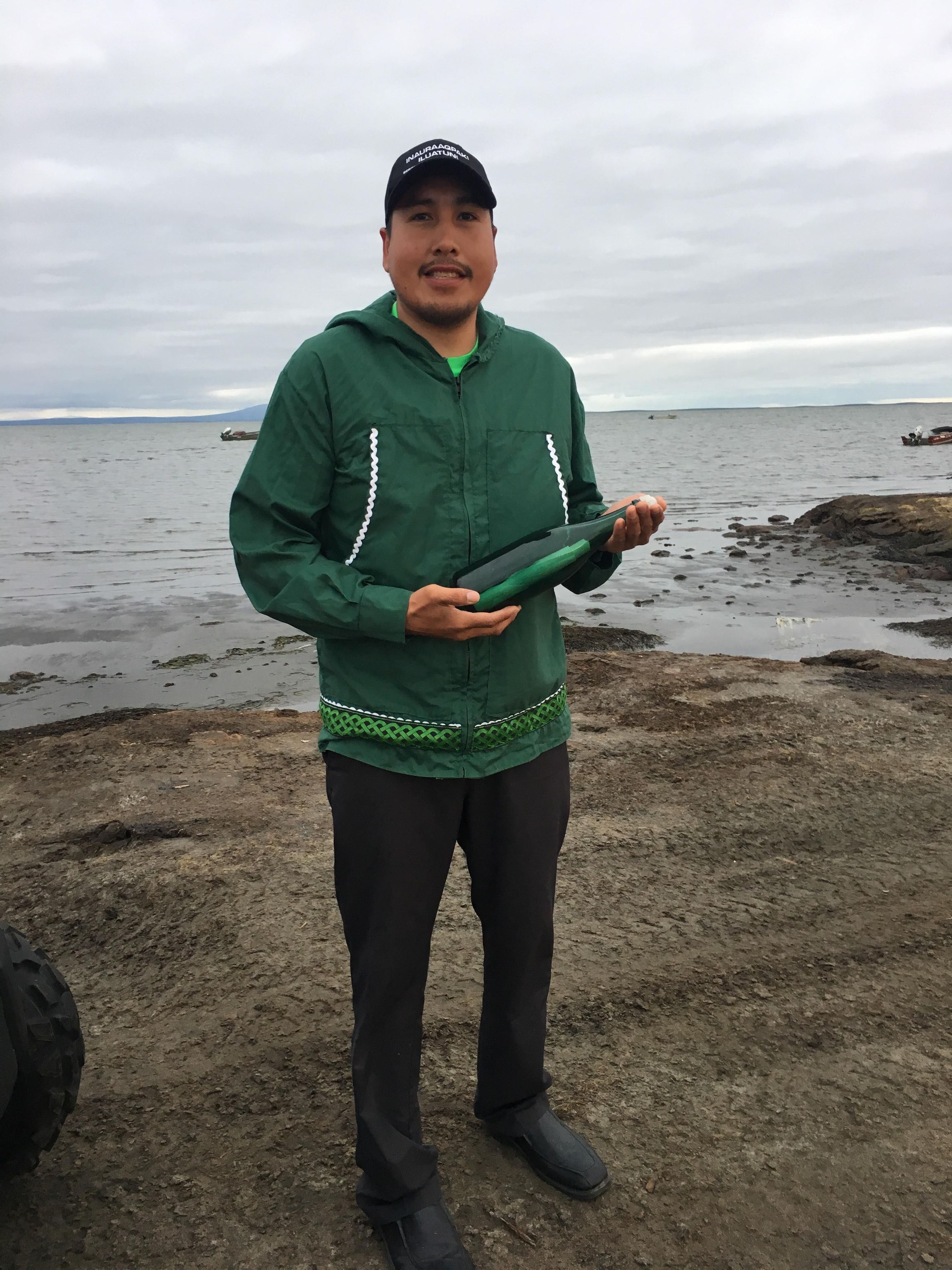 Tyler Ivanoff, a schoolteacher from Shishmaref, Alaska, moments after he discovered a Soviet-era message in a bottle.

“I found a message in a bottle today,” Ivanoff wrote on Facebook. “Any friends that are Russian translators out there?” 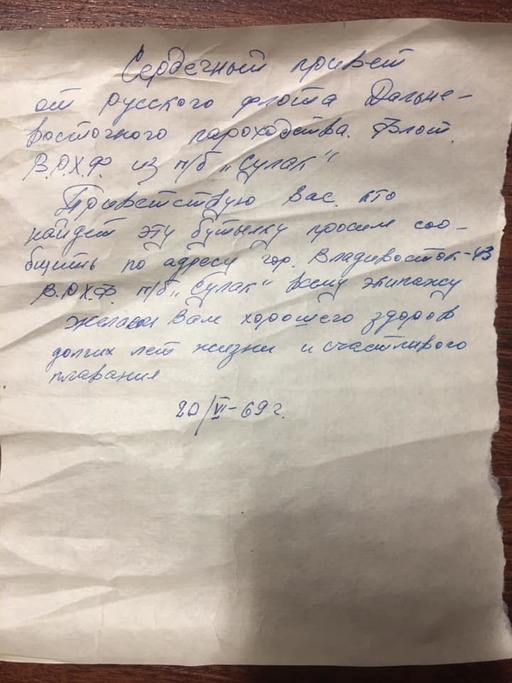 A copy of the letter written by Capt. Anatoliy Botsanenko in 1960 and found by Alaskan Tyler Ivanoff this past August.

Back in the USSR

The sender, Capt. Anatoliy Botsanenko, explained he was from the Far Eastern fishing vessel, the Sulak, and provided an address in the then-Soviet city of Vladivostok for a response — perhaps one day.

Related: In 'The Humorist,' Soviet comedy is no joke

“It was a simple message, but it was really pleasant,” said Ivanoff.

As news of Ivanoff’s discovery spread online, the hunt began for Capt. Botsanenko back in Russia.

Attempts to track him down in Vladivostok led to initial dead ends — the Sulak ship had been sold for scrap in Russia’s economically troubled 1990s. The Far Eastern fishing fleet dissolved along with the country it belonged to.

“My grandson called me and said, ‘Grandfather, they found a bottle. You were captain of a ship once weren’t you?’ And I told him, ‘Of course I was!’” Botsanenko told The World.

“And little by little, I started to remember.”

As Botsanenko tells the story, he was “back then” then 36: the youngest — and best — captain in Soviet Russia’s Far East fishing fleet.

His ship, the Sulak — a new mammoth fishing vessel with a crew of 250 — was sailing the waters off of the Russian Far East, making record hauls along the way.

Related: After 5 years of conflict, Ukraine’s barrier to peace is still ‘Russia’s political will’ 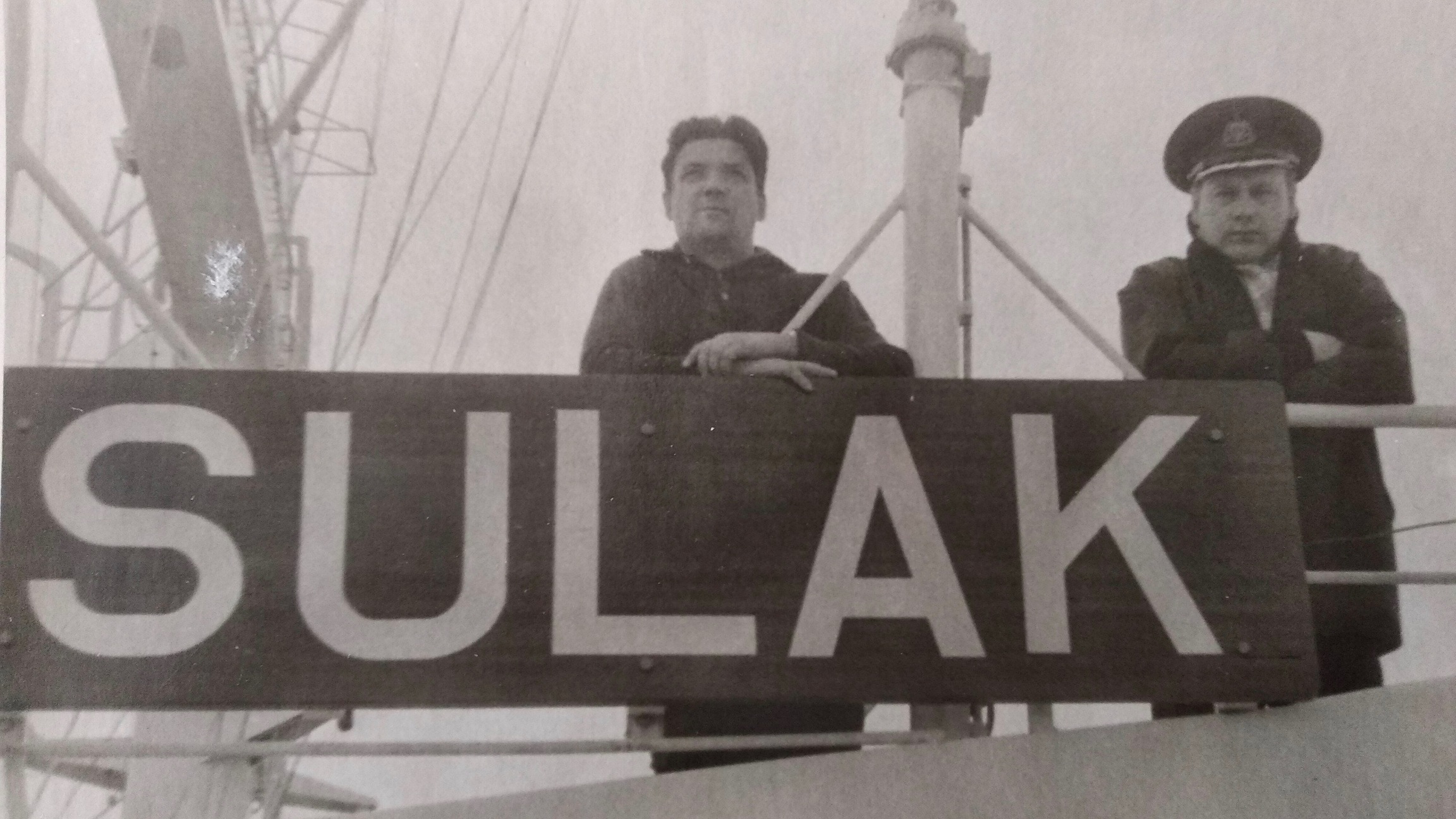 Capt. Anatoliy Botsanenko (figure to right in cap) aboard the Sulak at port in Vladivostok, circa 1969. The fleet’s youngest captain at 36 years old, Botsanenko commanded a crew of 250 aboard the ship.

They were the pride of the fleet, and they knew it.

“Everyone says we’re such a great crew, but time will pass and they’ll forget us and our ship. And so, somebody suggested we put a message in a bottle and throw it overboard. Maybe someone would find it one day?”

“Everyone says we’re such a great crew, but time will pass and they’ll forget us and our ship,” Botsanenko said. “And so, somebody suggested we put a message in a bottle and throw it overboard.”

“Maybe someone would find it one day?” 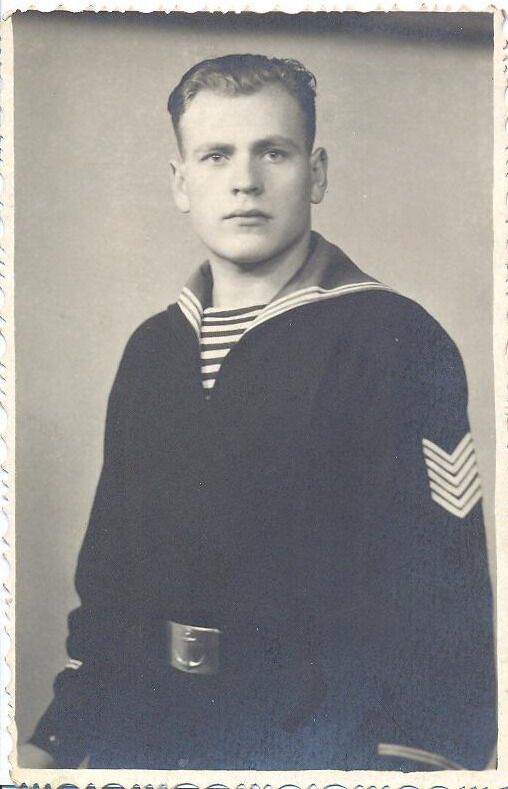 Anatoliy Botsanenko as a young cadet in Crimea, mid-1950s.

As captain, it was left to Botsanenko to scribble out a quick note while the crew looked on.

“What else to do, but write a few kind words,” Botsanenko said. “And I remember, my shipmate sealed it in a champagne bottle tightly with glue.”

Botsanenko then watched from the captain’s bridge as the crew pitched the bottle over the port side. It hit the water and quickly faded from view.

“We thought maybe one of our guys in the Soviet Union would find it in the Far East. Or maybe Japan or Korea,” he said. “Maybe they’d find it in 200 years. Or maybe it would just break up against a rock somewhere and that would be that.”

A bottle’s journey: Chance or fate?

Back in Alaska, Ivanoff wondered if a recent storm surge in the Chukchi Sea was what finally brought the bottle to shore.

“It may have helped push it around — so, you never know how long it was floating in the sea or stuck in some driftwood or lodged in a rock. But after 50 years, it seemed like it was sealed really well."

The green bottle had traveled over 1,200 miles. Maybe more.

“Why did this message from our crew, why did this bottle find him?” wondered Botsanenko in recalling the bottle’s discovery by Ivanoff.

“Because he’s a good person. And I wish him happiness, health, and all success — not just to him, but to the American people,” Botsanenko said.

“It’s not by accident that the bottle was found namely in America.”

“It’s not by accident that the bottle was found namely in America.”

Why? Botsanenko argues that — sooner or later — the US and Russia will get along. The Cold War, the collapse of the Soviet Union and the current fight over his native Crimea have all taught him: Governments change, but people mostly stay the same.

For Ivanoff, his home state of Alaska is a reminder enough.

With heritage tracing to the Alaskan Yupik tribe, Ivanoff witnessed visits by Siberian Yupiks to Shishmaref in the early 1990s in which the tribes shared similar dancing traditions.

He points to the US and Soviet Union joining forces against Nazi Germany in World War II, a war that took the lives of two older brothers. “The Americans helped us in that war,” remembered Botsanenko.

For Ivanoff, his home state of Alaska is reminder enough of shifting histories.

He’s part Alaskan Yupik, a tribe that shares ancestry with Native Siberians. Ivanoff recalls visits by Siberian Yupiks to Shishmaref in the early 1990s in which the tribes compared dancing traditions. They were largely the same.

Then there’s that last name — Ivanoff — a reminder of the Russian Empire’s one-time reach into Alaska before its sale to the United States in 1867.

“Over where my dad is from, probably half the village is Ivanoff, you know … ? Russia can seem as far away as the moon, but it’s actually not that far away.” 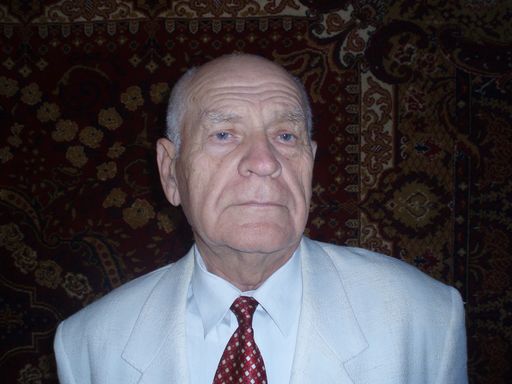 Yet, it’s far enough that Ivanoff and Botsanenko have never spoken.

“Unfortunately, I didn’t get a chance to speak with him,” Ivanoff said. “I was busy with work at the time, and there's a big time difference. But I’d probably just like to just have a simple conversation.” ”

“Tell him what I said, won’t you?” Botsanenko asked The World.

Even in the internet age, they’re still trading messages across the sea.

Only this time, no bottle necessary.