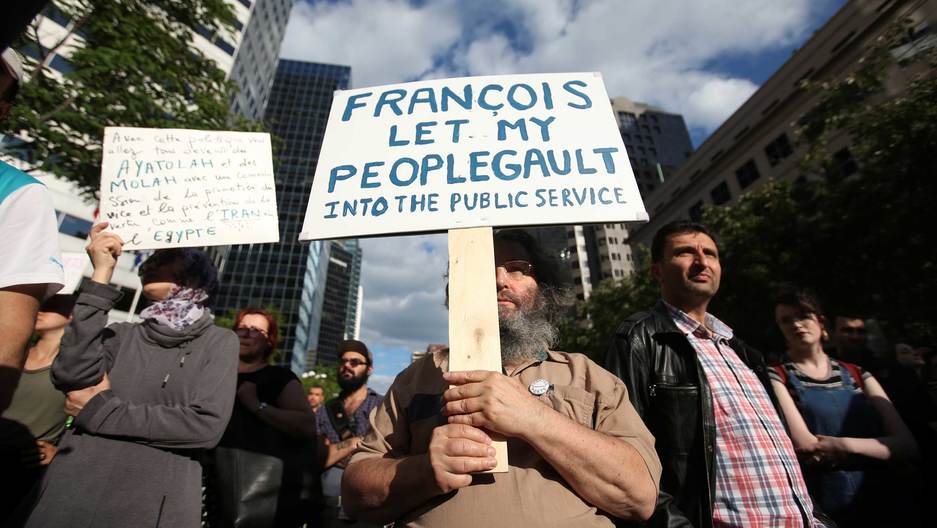 People protest Bill 21 on June 17, 2019, in Montreal before the passage of the legislation that banned teachers, police, government lawyers and others in positions of authority from wearing religious symbols such as Muslim head coverings and Sikh turbans.

Students and teachers in Québec have returned to school for the first time since a law banned teachers and public employees in positions of “authority” from wearing religious symbols — this means no headscarves, Sikh turbans, Christian crosses or Jewish skullcaps.

The law, which passed in June, is not a complete ban and included a clause that applies the law only to new hires or those who change jobs.

So, Maha Kassef returned to the classroom last week wearing her headscarf. She currently works three days a week at a French-language elementary school in the Montreal region.

“It’s always like the first two weeks, you just feel like you've been run over by a truck,” she joked.

But, watching her 3-year-old play at the end of a long day, she says she feels extra anxiety this year over the new law.

“That's the gray area that I don't know where I am,” she said.

The rules are so new she has questions she can’t answer: Is she protected by the grandfather clause as a substitute, moving from school to school, as needed?

The law bars her from future promotions if she won’t remove her headscarf.

So, she asks herself, “Am I forever going to be a substitute teacher, going from one part-time contract to the next?”

Kassef’s mother was a principal at a private school. Having taught in Québec and Ontario since 2006, Kassef had imagined eventually getting training to become a principal herself.

“For me, it kind of dashes a lot of the things that I had prepared for myself.”

“For me, it kind of dashes a lot of the things that I had prepared for myself,” Kassef said.

The legislation passed by a wide margin in the provincial legislature. Its focus on visible religious dress comes from a combination of historical and political influences, according to Solange Lefebvre, a professor at the Institute for Religious Studies at the University of Montreal.

“You find a certain allergy to religious visibility,” Lefebvre said.

She noted that French-speaking Québec and France, which has similar legislation, both have an anti-clerical streak that emerged in response to past domination by the Catholic Church.

Both number among the many regions where distrust of immigrants and Islam has risen since the 2000s, “but in Québec and France and some other countries, it takes this form of especially this [focus on] Muslim women wearing a hijab or niqab or burka.”

Lefebvre opposed the bill because she thinks it stigmatizes religious minorities. However, she said its supporters do include some recent immigrants from Muslim-majority countries in North Africa.

Nadia El-Mabrouk came to Canada from Tunisia and has two children in Québec public schools. She has testified in support of the religious symbols bill.

“We need to assure children an education without religious proselytization,” El-Mabrouk said. “Religious symbols are not neutral. They transmit messages that are not neutral.”

She recently signed a letter supporting a Montreal parent’s right to request to have their child moved out of the class of a grandfathered teacher still wearing a hijab. 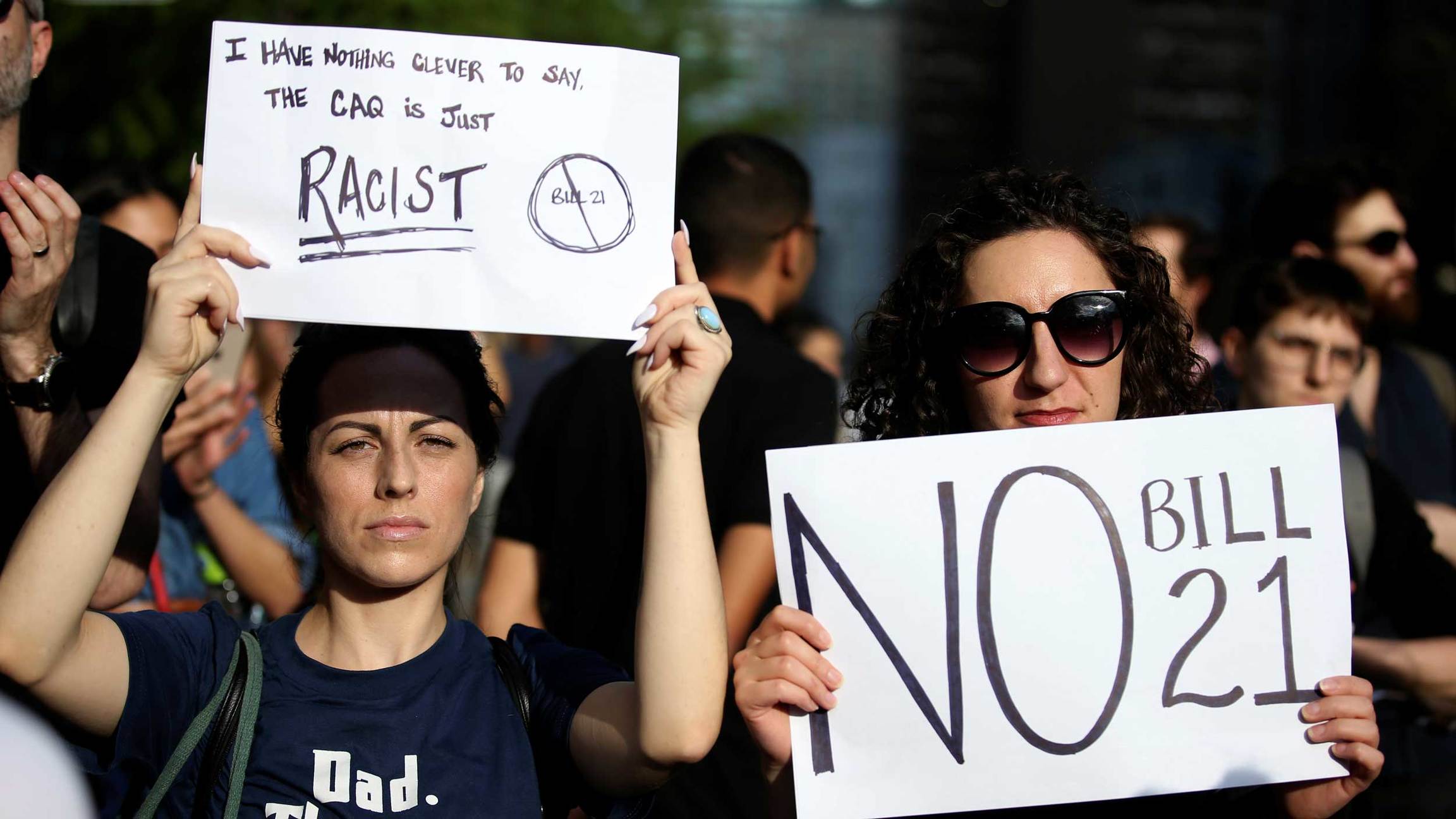 Protesters hold signs at a rally before the passage of Quebec's Bill 21 in Montreal on June 17, 2019.

“The law stipulates clearly that every citizen has a right to public services that are secular,” she added.

After press coverage of the case, Québec’s government made it clear that parents would not be allowed to “shop around” for teachers.

But Nuzhat Jafri, executive director of the Canadian Council of Muslim Women, says the entire conversation surrounding the bill has encouraged intolerance in Québec.

“We’re hearing about incidents occurring more often than they used to before the law passed, of young women having their headscarves pulled off, people calling them names.”

“We’re hearing about incidents occurring more often than they used to before the law passed, of young women having their headscarves pulled off, people calling them names.”

Local media have reported on several cases of newly hired teachers who have been refused jobs or asked not to wear their religious dress.

“This is a recipe for disengagement and disenchantment with Québec,” Jafri argued. “Many people will leave and have been leaving to go find employment elsewhere.” 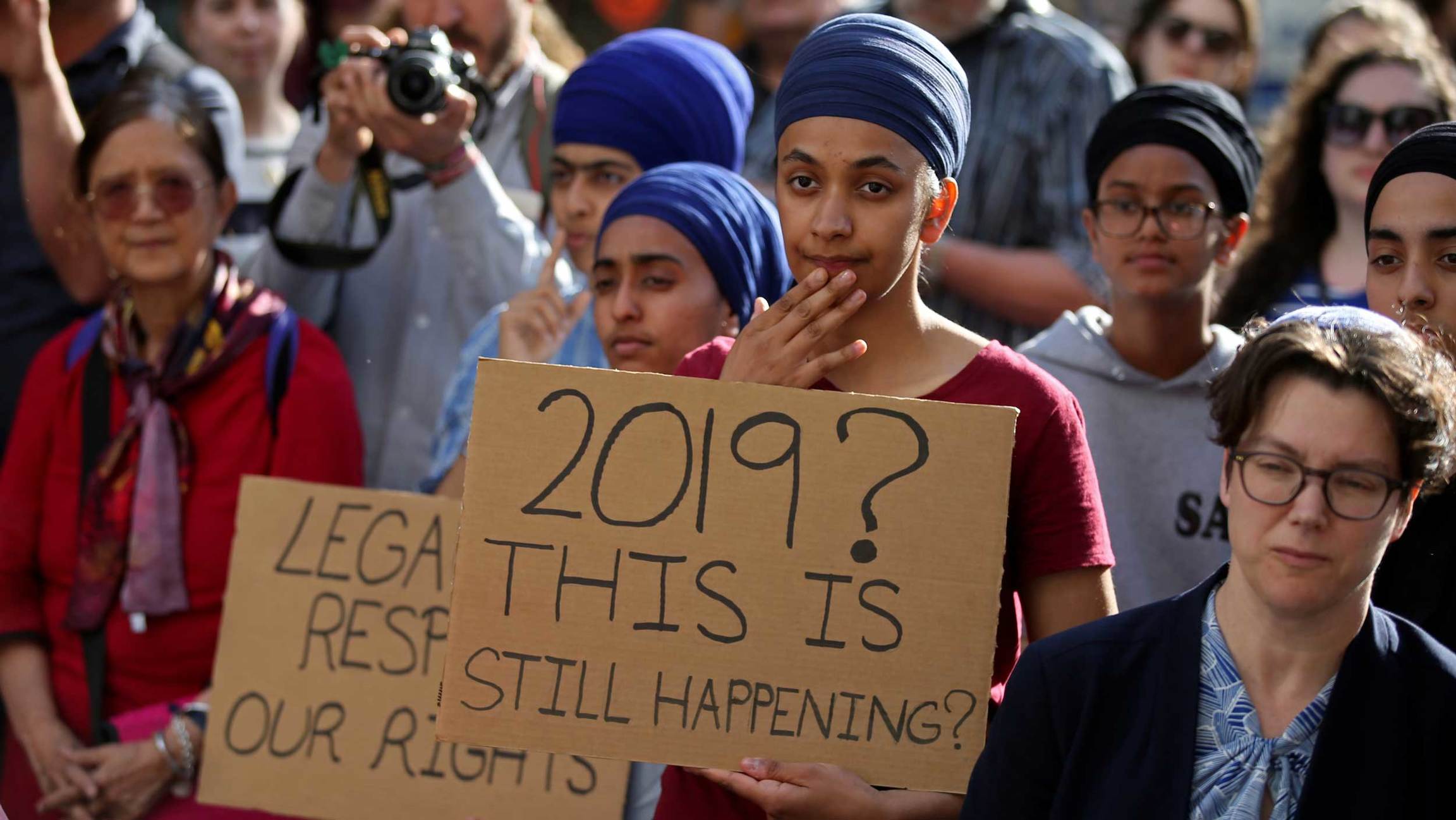 Protesters hold signs at a rally in Montreal on June 17, 2019, before the passage of Bill 21, which banned the wearing of religious symbols, such as headscarves and hijabs, by public employees.

Returning teacher Maha Kassef says she has felt self-conscious this fall in ways she hadn’t before about how other teachers and parents perceive her headscarf.

“My presence in the classroom, wearing something on my head, is just basically representing the multiculturalism that they're going to encounter outside of the school. So, I don't see the problem with that. … We're just a reflection of their daily life.”

“My presence in the classroom, wearing something on my head, is just basically representing the multiculturalism that they're going to encounter outside of the school,” she said. “So, I don't see the problem with that. … We're just a reflection of their daily life.”

Related: What we can learn from Canada’s universal child care model

The religious symbols law is being challenged in court by a university student who was training to become a teacher when the law was passed.

Simon Jolin-Barrette, Québec’s minister of immigration, francization and integration, did not respond to The World’s interview request but spoke with Radio-Canada in June as the legal challenge began.

Jolin-Barrette said that Québec’s government is confident in the soundness of its legislation, which he called “moderate” and “balanced.”