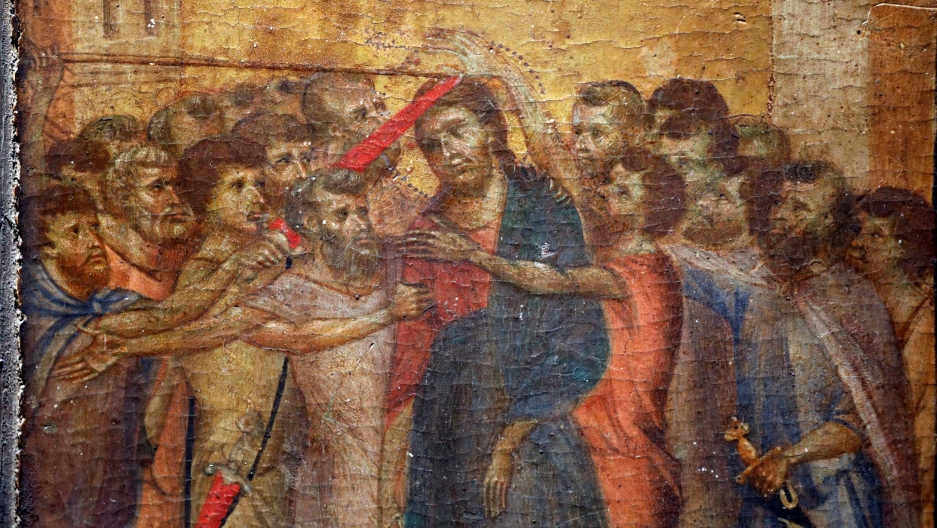 A part of the painting "Christ Mocked," a long-lost masterpiece by Florentine Renaissance artist Cimabue in the late 13th century, which was found only months ago hanging in an elderly woman's kitchen in the town of Compiegne, is seen in Paris, France, on Sept. 24, 2019.

Update: The rare painting set a record at auction on Sunday, fetching $26.6 million. The anonymous buyer was from northern France.

For years, a woman kept an old, religious painting above a hot plate in her home in Compiègne, in the north of France.

Then, a few months ago, she got it appraised.

That old painting is likely worth millions. 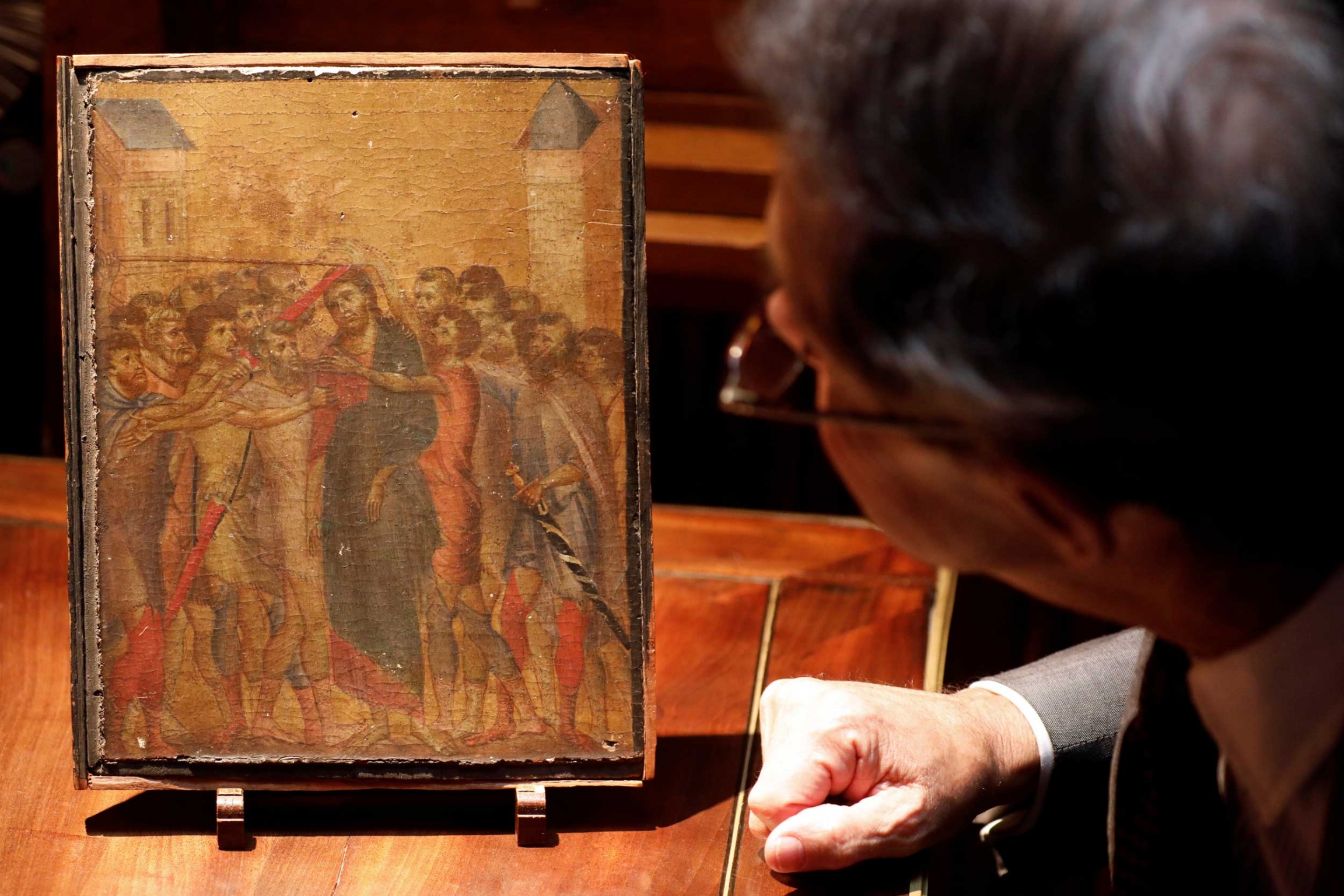 Art expert Eric Turquin inspects the painting "Christ Mocked," a long-lost masterpiece by Florentine Renaissance artist Cimabue in the late 13th century, which was found months ago hanging in an older woman's kitchen in the town of Compiegne, displayed in Paris, France, Sept. 24, 2019.

It's a piece called "Christ Mocked," a work by Cimabue, a 13th-century Italian painter and one of around 10 pieces that can be attributed to Cimabue, considered the father of modern painting.

The painting depicts a Christ-like figure cloaked in dark robes. He's surrounded by a group of men who look like they're pestering him. A few have swords.

"In the world of art history, this is seriously important," said Xavier Salomon, Peter Jay Sharp Chief Curator at the Frick Collection in New York. "He is described in all the sources as the teacher of Giotto and with Giotto is sort of the beginning of European art ... of Western painting, as we think of it," he added. "So if you think of a 13th-century artist whose name is a sort of mythical name, to be able to find a new, previously [undiscovered] work by that artist is an unbelievable piece of news."

The piece is part of a diptych that originally contained eight panels. Of the eight, two are in museums — one at the Frick and another at the National Gallery in London. 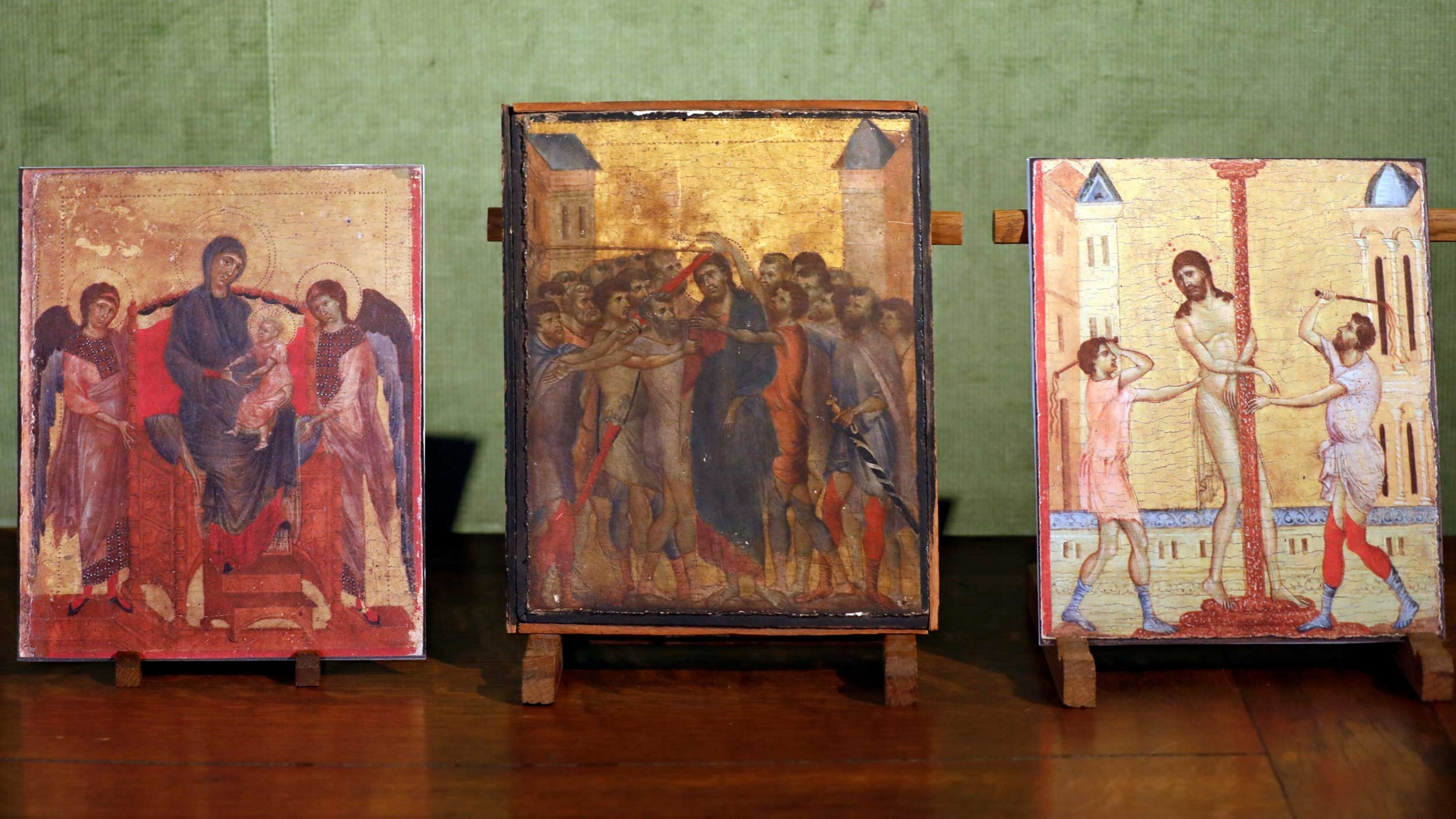 The painting "Christ Mocked," center, a long-lost masterpiece by Florentine Renaissance artist Cimabue in the late 13th century, was was found months ago hanging in an elderly woman's kitchen in the town of Compiegne. It is displayed in Paris, France, on Sept. 24, 2019, alongside copies of two other Cimabue paintings thought to be part of the same diptych. On the left is "The Virgin and Child with Two Angels," which belongs to the National Gallery, and on the right is "The Flagellation of Christ," which is part of the Frick Collection in New York.

"So this one that just came up in France should be below the National Gallery one and to the left of our one at the Frick, which seems to make sense," Salomon said, describing the likely locations of the scenes in the diptych. "And we've always known that there were other pieces of this work which were lost and we don't know where they are or what they're like. I have personally not seen it in the flesh but from what I've read and seen, it matched exactly our pieces. So I think there's really no doubt that this is Cimabue and it's part of this ensemble."

The Frick Collection acquired its Cimabue in 1950 and the National Gallery bought its piece in 2000, but not on the open market.

The painting is expected to go up for auction next month and Salomon said it could fetch a record-breaking price.

"It's effectively the first one since 1950, so it could break all records for paintings of that period and that type," he said.

It's the third known piece of a diptych painted around 1280.

"That means that there are still five pieces out there waiting to be found," Salomon said.