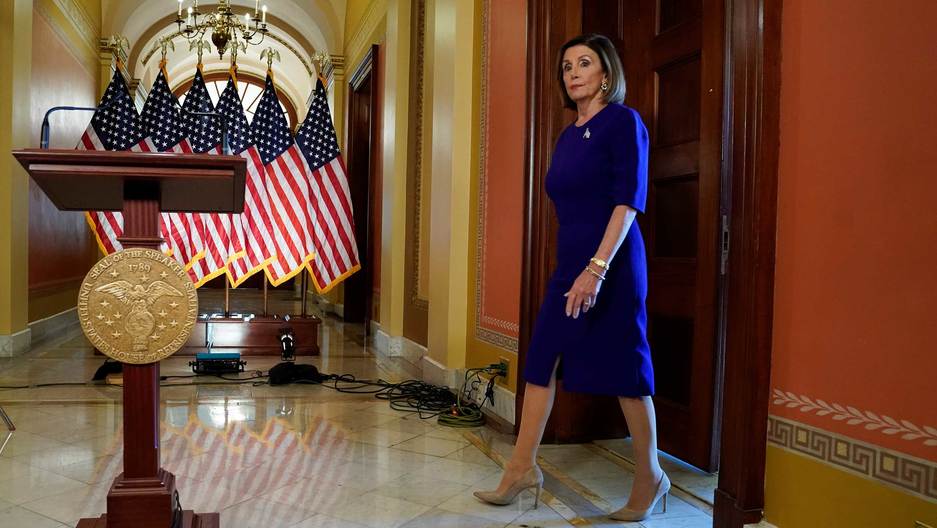 House Speaker Nancy Pelosi arrives prior to announcing the House of Representatives will launch a formal inquiry to investigate whether to impeach US President Donald Trump following a closed House Democratic caucus meeting at the US Capitol in Washington, DC, on Sept. 24, 2019.

The US House of Representatives will launch a formal impeachment inquiry into US President Donald Trump over reports he sought foreign help to smear a political rival, setting up a dramatic clash between Congress and the White House that could spill into the 2020 presidential campaign.

House Speaker Nancy Pelosi announced the inquiry on Tuesday after a closed-door meeting with Democratic lawmakers, saying Trump's actions appeared to have undermined national security and violated the US Constitution.

"The president must be held accountable. No one is above the law," said Pelosi, who had for months been reluctant to embrace an impeachment effort.

Such an important day at the United Nations, so much work and so much success, and the Democrats purposely had to ruin and demean it with more breaking news Witch Hunt garbage. So bad for our Country!

Trump promised on Tuesday to release a transcript of his phone call. He also confirmed he had withheld nearly $400 million in US aid to Ukraine but denied he did so as leverage to get Zelenskiy to initiate an investigation that would damage Biden.

Related: Why did Trump withhold $250 million in military aid from Ukraine?

Pelosi said the six congressional committees currently investigating Trump would continue with their probes as part of the inquiry.

Biden on Tuesday called on Trump to fully comply with congressional investigations into the matter or risk impeachment.

"If he continues to obstruct Congress and flout the law, Donald Trump will leave Congress in my view with no choice but to initiate impeachment proceedings," Biden told reporters in Wilmington, in his home state of Delaware.

Trump, who has withstood repeated scandals since taking office in January 2017, said a "complete, fully declassified and unredacted" transcript of the July 25 call would be released on Wednesday.

The controversy came to light after a whistleblower from within the US intelligence community lodged a complaint with an internal watchdog about Trump's conversation with Zelenskiy.

House Intelligence Committee Chairman Adam Schiff said his panel was communicating with an attorney representing the whistleblower and that the individual would like to testify this week.

Related: What does the end of the Mueller investigation mean for US-Russian relations?

Trump said the transcript would show the call was "totally appropriate," that he had not pressured Zelenskiy to investigate Biden and that there had been no "quid pro quo" for US aid in exchange for a probe. Quid pro quo is a Latin phrase meaning a favor that is exchanged for a favor.

Reporting by Patricia Zengerle and David Morgan in Washington; Additional reporting by Steve Holland at the United Nations; Writing by Will Dunham and John Whitesides; Editing by Alistair Bell and Peter Cooney