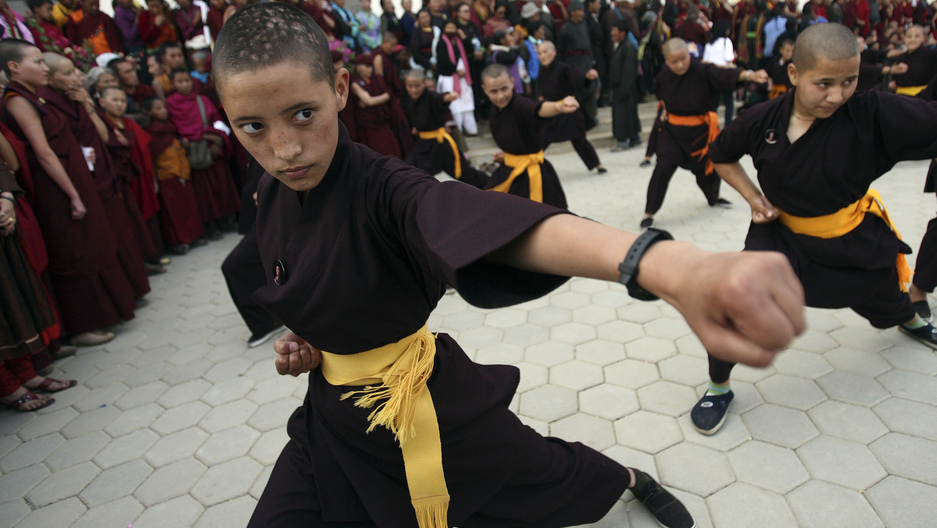 A Buddhist nun takes part in a Kung Fu display during the second annual Druk council in Kathmandu April 11, 2010. Practicing Kung Fu in Buddhism is considered good for meditation, self defence and to reach the height of spiritual health.

In 2015, when an earthquake hit Nepal, killing 9,000 people, women started to disappear. The survivors, who thought themselves lucky, soon found themselves without much choice, but to trust the promises of overseas work and education, turning many into victims of trafficking.

This is when a bunch of nuns from a Buddhist nunnery in the western valley of Kathmandu decided to pick up their tools and start building homes and broken compound walls. Amid the chaos that followed Nepal’s biggest earthquake, the nuns went door to door, educating families about trafficking and women empowerment.

"It was scary, but we had decided not to leave," said Dipam, a 'Kung Fu' nun. "No one ever imagined nuns could do martial arts. But we did. So when we saw homes being destroyed and women being taken away, we decided to educate the families on what a woman is capable of," she said.

Just 13-years-old when she left her home in Himachal Pradesh’s Kinnaur, Dipam said she had always wanted to be a nun, but never thought that she would end up helping thousands of women in Nepal.

With the area becoming increasingly vulnerable to climate hazards, resource degradation and food scarcity, the past decade has seen communities becoming poorer, with women and girls at particular risk.

In the rural mountain communities of Nepal, the impact of climate change is more keenly felt since much of the agriculture — a mainstay of the economy — continues to be rain-fed. With the area becoming increasingly vulnerable to climate hazards, resource degradation and food scarcity, the past decade has seen communities becoming poorer, with women and girls at particular risk. Although climate change has been the push factor in human trafficking in the area for a while, the earthquake destroyed already vulnerable livelihoods, creating a situation that traffickers actively exploited.

In the three months after the earthquake, Nepal’s National Human Rights Commission reported a 15% increase in the number of interceptions of people “vulnerable” to human traffickers. On the Indian side, the cases of trafficking being registered along the Indo-Nepal border also saw a sharp surge after the earthquake, from just eight cases being lodged by the Union Home Ministry's Shastra Seema Bal (SSB) in 2014 to 147 in 2017.

Many women are still are being sold into a global network that includes brothels and massage parlours in India, dance bars in Kenya, home-cleaning services in the Middle East and slave labour in South Asia.

In Nepal, the combination of delays in rebuilding homes, the loss of livelihoods that pushed people to the brink of desperation for money and established criminal networks resulted in an epidemic of human trafficking. According to reports, following the quake, many women were and are still are being sold into a global network that includes brothels and massage parlours in India, dance bars in Kenya, home-cleaning services in the Middle East and slave labour in South Asia.

The 26-year-old nunnery in the village of Ramkot is where the 800-odd nuns, between the ages of nine and 90, learn Kung Fu.

The 26-year-old nunnery in the village of Ramkot is where the 800-odd nuns, between the ages of nine and 90, learn Kung Fu, fix electrical appliances and do plumbing, besides praying. And, they often cycle for miles across the Himalayas to let people know that "women are capable of everything." There were many who implored the nuns to evacuate the nunnery after it had collapsed, but they decided to stay and help.

"The building had started breaking when we realised that the earthquake was strong. But we didn't shriek or cry, we decided to be brave and do our job," Dipam said. The job she refers to is 'community duty', which the nuns consider a 'spiritual exercise'.

For days following the earthquake, the nuns would trek to nearby villages to help remove the rubble from people’s homes, salvage and return buried objects and clear pathways. They made night shelters for the affected and went around distributing rice and lentils. Back in their home, the nunnery, which was also completely destroyed, the nuns repaired solar panels, laid new tiles in the front yard and rebuilt their broken compound wall. At night, the older nuns patrolled in the streets outside the nunnery, while the younger nuns slept in tents on the lawn.

"There were only dead bodies for days after the earthquake. Then we found out girls from poor families were being sold because their parents could not afford to keep them anymore," said Rupa, another Kung Fu nun from Lahol Spiti in Himachal Pradesh.

With many of the nuns, hailing from Himachal Pradesh, Jammu and Nepal, it is personal. After facing the consequences of climate change first-hand in their own villages, the nuns decided to start walking with two strong messages: protect the environment, and empower women. They have since travelled the world, learning about climate change, partnering with global non-profits and also participated in the 2014 United Nations, Conference of the Parties (COP 20).

"It taught me to be confident, I realised I am not less than anybody."

The nuns believe that when in 2008, the leader of the 1,000-year-old Drukpa lineage, His Holiness The Gyalwang Drukpa changed the order of gender stereotypes and got the nuns to learn Kung Fu, things became different for them. "It taught me to be confident, I realised I am not less than anybody," said Dipam.

In 2014, Dipam walked a distance of 800 km from Varanasi to Lumbini. Every day, the nuns would walk for 8 to 10 kilometers and clean up villages along their route. In 2011, she went to Sri Lanka to spread the message of ill effects of plastic waste. "They think we are boys when they see us on our bike. We stop and tell them that not only are we women, but we are also Buddhist nuns," Rupa said, not being able to hide her glee.

In 2016, led by His Holiness himself, the nuns, clad in black sweatpants, red jackets and white helmets, cycled 2,200 kilometers from Kathmandu to Delhi to spread the message of environmental awareness and encourage people to use bicycles instead of cars. "We talked about women trafficking on our journey because they are interconnected," said Rupa.

“It was to show these villages that women are strong and capable enough to cycle,” the group’s communications coordinator Carrie Lee said.

"We were not asking the women to run away from their families, we were educating them and helping build back their lives so they can continue to stay and feel empowered," said Rupa. The nuns’ motto is: ‘No one’s coming to rescue you’ and they couldn't be more spot on.

This story originally appeared on News18.com. It is republished here as part of The World's partnership with Covering Climate Now, a global collaboration of more than 250 news outlets to strengthen coverage of the climate story.