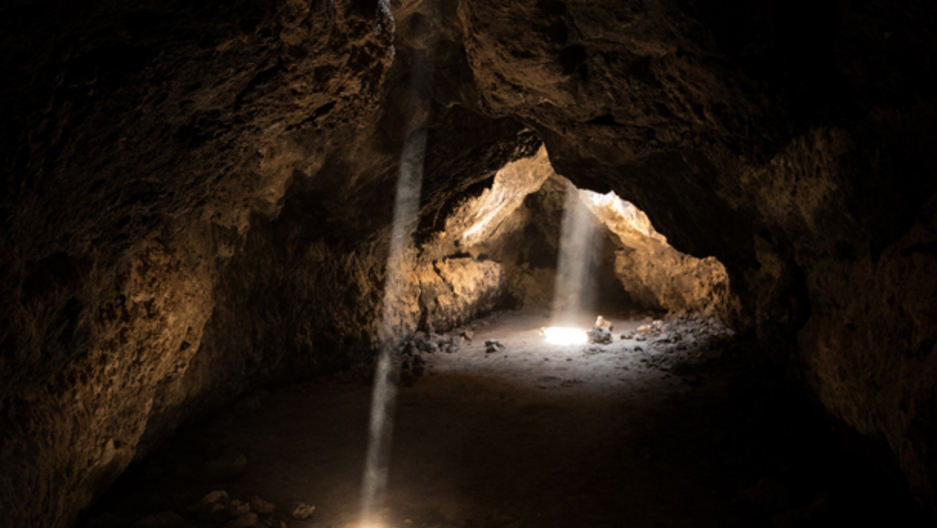 “Darkness is an illumination down there, as well.” – Robert Macfarlane
Credit:

Many nature writers turn our eyes skyward, towards majestic mountains, or toward open valleys and wild rivers. But there’s another other world beneath our feet, in the dark and hidden places below the Earth’s surface — places that the British author Robert Macfarlane chronicles in his newest book, "Underland: A Deep Time Journey."

Macfarlane defines the underland as “all that lies beneath us, and particularly, that which lies below the surface of the land. It's a place," he says, "that we have shunned and been frightened by, but also been drawn to for as long as we have been anatomically modern humans and indeed longer than that.”

"[The underland] has a pretty bad rep. But it is also teeming with wonder and secrets."

Humans tend to shun the underland for a variety of reasons, Macfarlane says. “It’s dark, it's dirty, it's hard to get anywhere, it’s associated with death, with mortality, with confinement, exploitative labor practices, incarceration. It has a pretty bad rep. But it is also teeming with wonder and secrets. And those are its two sides. Darkness is an illumination down there, as well.”

The underland is also a “zone of myth,” Macfarlane says. “Classical myth is filled with what they call the katabasis — the journey down into the underworld, often to retrieve something of value, a loved one; or to consult with somebody — a dead — about the future. It did come to have that pull for me. But I was always guided. The book is filled with the mycologists and glaciologists and [other] people who have intense relationships with what lies beneath, imaginative or otherwise. They cast the light. They held the light for me.”

“Deep time" is a phrase that John McPhee, the well-known New Yorker nonfiction writer, came up with, Macfarlane explains. But it's an old concept, he says — as old as geology itself. “Basically, 'deep time' is Earth history in its full units of age and ancientness — the epoch, the eon, the era; not the minute, the second, the week, the year. Deep time crushes our units to a wafer, really, to an irrelevance.”

In the Anthropocene, our current era, humans have accelerated or “scrambled” deep time, Macfarlane says. “We burn Carboniferous-era fossil fuels to melt Pleistocene-era ice to determine Anthropocene future climates. And suddenly, deep time is no longer sequential and orderly, if it ever was.”

Macfarlane got the idea for his book in 2010, the year of the Deepwater Horizon blow-out, the Icelandic volcano eruption, and of Chilean miners trapped underground.

Macfarlane got the idea for his book in 2010, the year of the Deepwater Horizon blow-out, the Icelandic volcano eruption, and of Chilean miners trapped underground. “It was a real underworld year,” he says. As he worked and explored, Macfarlane identified what he calls the “three great tasks of the underland” — to shelter, to yield and to dispose.

To shelter: Underland is “where we put the bodies of our loved ones in a way to keep them safe, so we can go back and meet them again,” he explains. “It's where the Germans are putting all of their state documents and microfiche; or [it’s] the Svalbard Seed Vault, where we're putting as much of our seed biodiversity as we can in storage. That's sheltering.”

To yield: “Obviously, we're a mining species; we’re a burrowing species,” Macfarlane explains. “We’ve drilled 50 million kilometers of oil borehole alone. We've mined so much wealth out of the earth. So, we go [underground] to take knowledge; we go to take matter.”

To dispose: Underland is “where we put the stuff we don't want — our nuclear waste, our sewage,” Macfarlane explains. “The Cloaca Maxima in Rome was the great sewer at the heart of Rome, that the city would just chuck all its stuff into.”

The ice cap was melting, the glaciers were running and calving fast, and we saw this extraordinary event.”

Macfarlane says he had many profound experiences while researching his book, but one stands out in its sheer size and power. He was in Greenland in 2016, when temperatures in Nuuk, the capital, reached 22 degrees Celsius (about 72 degrees Fahrenheit). “The ice cap was melting, the glaciers were running and calving fast, and we saw this extraordinary event,” he says.

In his book, he describes it this way:

[I]t seems that a white freight train is driving fast out of the calving face of the glacier, thundering laterally through space before toppling down towards the water. And then the white train is suddenly somehow pulling white wagons behind it from within the glacier, like an impossible magician's trick. And then the white wagons are followed by a cathedral, a blue cathedral of ice complete with towers and buttresses, all of them joined together into a single unnatural sideways collapsing edifice. And then a whole city of white and blue follows the cathedral. We shout and step backwards involuntarily at the force of the event, even though it's occurring a mile away from us. And we call out to each other in the silence before the roar reaches us, even though we are only a few yards from each other. And then all of the hundreds of thousands of tons of that ice city collapse into the water off the fjord, creating an impact wave 40 or 50 feet high.”

“It was a dreadful event,” Macfarlane says.

He also witnessed another calving, this one from below the water surface, a “huge, dark blue-black pyramid of ancient ice rising up out of the sea.”

“For me, this was something out of an early 20th century horror novella,” Macfarlane says. “But it was time itself rising up, out of sequence, and, of course, glaciers do this. This is what they do; they’re rivers of ice. But we are accelerating them, as we are accelerating time in all sorts of ways. And for me that emblematic moment was an Anthropocene moment.”