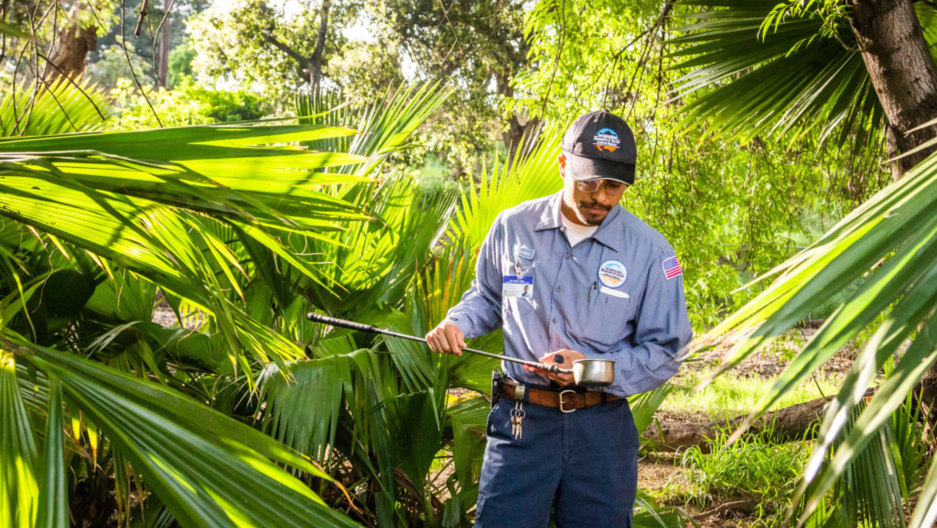 Steven Gallegos, a vector control specialist with the San Gabriel Valley Mosquito & Vector Control District, inspects a water sample at a park in Covina, California, to check for mosquito larvae.

In humanity’s battle against the mosquito, Philip Stoddard sees a clear victor.

“The mosquitoes are winning, and everything else is losing,” said Stoddard, whose roles as a biologist at Florida International University and as mayor of South Miami collided in July 2016 when the state became ground zero for America’s first outbreak of Zika, a virus that can cause severe brain defects in unborn babies.

Mosquito-borne illnesses like Zika have increased almost tenfold nationally from 2004 to 2016, according to the Centers for Disease Control and Prevention (CDC). That’s put local governments at the front lines of a contentious public health war ― one that climate change will only worsen.

A 2016 report by Climate Central found warming temperatures coupled with more humid days have elongated mosquito seasons. The insect’s range has also expanded. Aedes aegypti, the species that transmits Zika, dengue, yellow fever and chikungunya, has moved northward in the U.S. by roughly 150 miles per year. By 2050, researchers predict, almost half the world’s population will be exposed to at least one of two major disease-carrying mosquitoes. Scientists are also concerned about the growing threat of resistance, which undercuts the effectiveness of insecticides.

Mosquitoes are not a new enemy. Historian Timothy C. Winegard estimated in a 2019 book that the winged insects have killed more than 52 billion people ― making them humanity’s “deadliest predator” with far more casualties than all recorded wars combined. Malaria, now seen as a mostly tropical disease, was rampant in the U.S. until a federal program run by an early version of the CDC eliminated the illness domestically by 1951. That program made heavy use of DDT, a now-banned insecticide that is toxic to mosquitoes but also to birds, bees and humans.

Today, the herculean task of managing and tracking mosquitoes falls largely to local mosquito control districts. These little-known entities can operate as standalone agencies funded through special taxes or as divisions within health or agricultural departments. Vast differences in budgets, scientific expertise and policy mean mosquito control in the U.S. can vary widely from one location to the next. Districts also have to strike a tough balance between safeguarding communities and weighing concerns from environmentalists about the ecological impacts of insecticides. 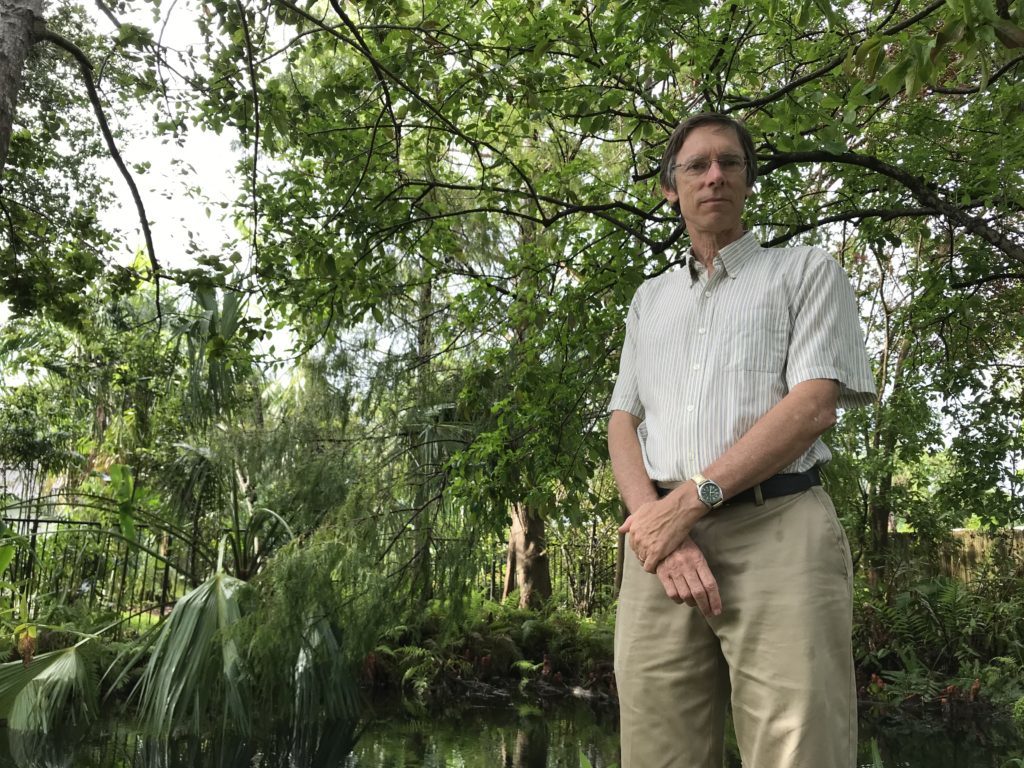 Philip Stoddard, a biologist at Florida International University and mayor of South Miami, stands in his back yard in 2017.

Effectively controlling mosquito populations entails far more than spraying, said Joe Conlon, a technical advisor with the American Mosquito Control Association, which serves as a forum for managing those insects and other disease-causing pests. “You have to know where the mosquito lays its egg, what it feeds on. You have to know everything possible about that mosquito in order to effectively and efficiently control it,” said Conlon. “It’s not, ‘It flies, it dies.’”

Ideally, Conlon said, districts are employing a variety of preventative measures, from getting homeowners to dump water-filled containers in their yards to closely tracking populations using traps.

Better-funded districts like Stoddard’s can afford to employ full-time scientists and experiment with novel techniques. Last year, South Miami ran a successful trial in which male mosquitoes infected with Wolbachia, a naturally occuring bacteria, were released over a half-square mile. Only female mosquitoes bite and transmit disease, using digested blood to lay their eggs. Females that mate with Wolbachia-infected mosquitoes lay eggs that don’t hatch. After the trial, the area saw its local mosquito population plummet 75%.

Stoddard is a critic of how state and federal officials handled the Zika outbreak in 2016.

Officials blanketed portions of Miami-Dade County in a cocktail of pyrethroids ― the most widely used form of insecticides ― and naled, which is derived from nerve agents used in World War II. The problem, Stoddard said, is those insecticides weren’t particularly effective against the species that transmits Zika. His research suggests pyrethroids had little impact on mosquito counts during the outbreak, while naled’s effects were short-lived.

What did work, according to Stoddard’s analysis, was a bacterial larvicide that targets recently hatched mosquitoes not yet able to fly. Unlike pyrethroids and naled ― which researchers are investigating for potential impacts on bees as well as humans ― the larvicide is considered non-toxic to other insects and people.

The CDC wrote in a statement that it “believes that the mosquito control methods used in Miami-Dade county during the 2016 Zika virus outbreak were successful.” Agency data spanning several days of the outbreak showed “a statistically significant drop in the mosquito population” as well as “a clear drop in the number of human Zika virus cases,” the CDC wrote, adding that it plans to publish its findings in a journal soon.

The lab-grown mosquitoes that South Miami used in its Wolbachia trial last year were shipped in cardboard tubes from a company called MosquitoMate, which will offer direct-to-consumer orders in Kentucky next year. Harris County, Texas, began its own MosquitoMate trial this spring as part of a larger effort that started in 2012. The county has been breeding natural predators such as dragonflies, carnivorous plants and even other larvae-eating mosquitoes it calls “mosquito assassins.” The local health department closely monitors the region for species such as Culex quinquefasciatus, which can transmit St. Louis encephalitis and West Nile Virus.

“We need the help of politicians and public health officials to recognize our job is not response, it’s prevention.”

But districts hampered by a lack of resources and authority may be unable to do much beyond spraying, and only after an infection is detected. “We need the help of politicians and public health officials to recognize our job is not response, it’s prevention,” said Conlon.

That’s often not clear to the public. “There is so much that happens in a mosquito control program that people don’t know about,” said Eva Buckner, an assistant professor at the Florida Medical Entomology Laboratory at the University of Florida. Her role includes working with over 65 mosquito control districts in the state and researching various control methods.

In active outbreaks like Zika, Buckner said, spraying for adults is necessary to quickly knock down the number of mosquitoes that could transmit a virus. And advances in spraying have helped lower the amount of chemicals needed per acre, she said. Even insecticide resistance, Buckner said, doesn’t necessarily mean a product will no longer kill.

The CDC defines resistance this way: “when used as directed, a product no longer works, or only partially works.”

“Nationwide, there’s been an increase in resistance,” said Mark Clifton, executive director of the North Shore Mosquito Abatement District in Illinois. “It really threatens our ability to curtail an outbreak.”

Clifton’s district built a lab and outfitted it to test for a variety of viruses and pathogens in mosquitoes and ticks, which the district also monitors. Similar to mosquitoes, ticks are expanding their range amid climate change, posing a public health threat of their own.

To test mosquitoes for resistance to insecticides, the district breeds mosquitoes from eggs in its lab and exposes the adults to active ingredients in special kits designed by the CDC. But insecticides and mosquitoes interact differently in a controlled lab setting than in real life, so Clifton is unsure if his district’s results will give a true picture of the challenges faced in the field.

It’s hard to know exactly how many mosquito populations are displaying high levels of insecticide resistance because data isn’t yet widely collected or shared in a central way. The CDC launched an effort called MosquitoNet in 2016 as one way to address the data gap by providing a place to report information on local mosquito populations, including insecticide resistance. But uptake has been slow and complicated.

That’s in part because CDC works primarily with health departments, not mosquito districts. And participation in MosquitoNet is voluntary. So far, 39 states have contributed some surveillance data to MosquitoNet, but only 14 have included results on insecticide resistance.

“CDC is really more of a funding agency. We don’t really have any oversight over anyone.”

“CDC is really more of a funding agency,” said Roxanne Connelly, a chief medical entomologist at CDC. “We don’t really have any oversight over anyone.”

Outside of CDC, the federal government plays a limited role in mosquito control and surveillance. The U.S. Environmental Protection Agency, which reviews insecticides for safety, writes on its website that it “cannot help with local mosquito control problems because we don’t have jurisdiction or knowledge about the local situation.”

The CDC plans to publish its first report on MosquitoNet early next year. It declined to provide any data from the program to the Center for Public Integrity. In rejecting Public Integrity’s records request, the agency cited concerns about privacy and the possibility that the data could be misinterpreted: “States and local vector control organizations have provided these data to CDC. However, if we release this information in its current raw, unvalidated form, CDC is likely to jeopardize future submissions by the entities.”

The CDC has stepped up its efforts following the Zika outbreak, including using supplemental funding from Congress for a new program targeted at getting researchers, public health officials and control districts to collaborate on efforts to control illnesses spread by mosquitoes and other carriers. The future of that program ― much like the outcome of the human vs. mosquito war ― is unclear.

“At this point we haven’t been told if there will be funding for that,” said Connelly, “but it’s something we’d like to be continued.”

This story originally appeared on the Center for Public Integrity and reported in partnership with The Weather Channel. It is republished here as part of The World's partnership with Covering Climate Now, a global collaboration of more than 250 news outlets to strengthen coverage of the climate story.