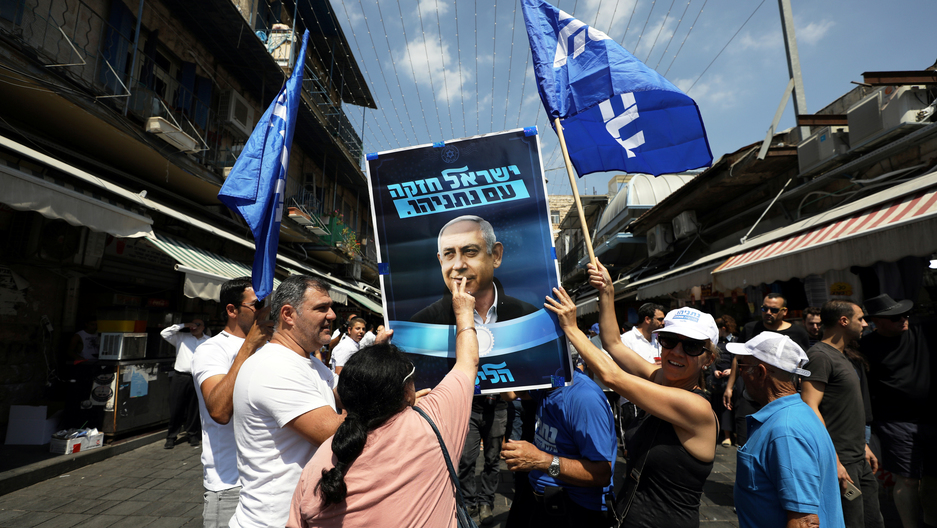 A supporter of the Israeli Likud party kisses an election campaign poster depicting Prime Minister Benjamin Netanyahu at a market in Jerusalem, Sept. 13, 2019.

Israelis are heading back to the polls for the second time this year, and whether they love him, can’t stand him or happen to be indifferent about Prime Minister Benjamin Netanyahu, this election is all about “Bibi,” as he’s known.

On Friday, the latest polling numbers found Netanyahu’s right-wing Likud party and the centrist Kahol Lavan, the “Blue and White” party, locked in a dead heat. Each party was projected to win 32 seats in Israel’s parliament, the Knesset.

It might seem surprising to see Netanyahu polling so well. After all, he is facing multiple corruption charges. And he failed to put together a governing coalition back in April.

Still, when voters in the city of Rehovot, which has been described as “the Ohio of Israel,” were asked about next Tuesday’s election on a recent afternoon, most of them started talking about Bibi.

Related: What Israel's new election reveals about the struggle over Jewishness

Rehovot is in the center of Israel. Politically speaking, it’s right in the center as well. Like Ohio in the US, in past elections, the vote in the city has been a bellwether of sorts, with Jewish voters tracking pretty closely to the way people voted across the country. 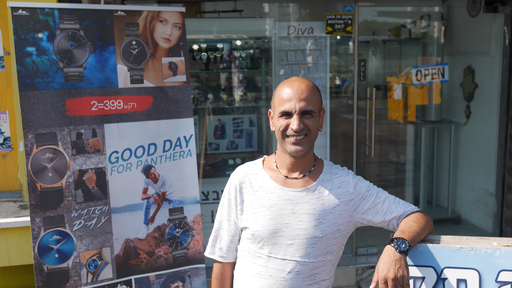 Itay Levi, 43, runs a little shop in the center of Rehovot where he repairs and sells watches. In past elections, Levi said, Netanyahu was an easy choice.

“You cannot trust nobody right now,” Itay Levi, 43, said. Levi is a stylish guy — two earrings, a necklace and ripped jeans. He runs a little shop in the center of town where he repairs and sells watches. Like his parents, Levi was born and raised in Rehovot. He was happy to talk politics, and vent a little frustration.

Levi said politicians have been slinging all kinds of dirt in the home stretch of this election, trying to get an edge. In past elections, he said the choice was easy for him: Likud. Bibi Netanyahu. All the way, he said, because he kept the country safe.

“Usually, I voted for Bibi,” Levi said. “This time I think we had enough.”

Levi’s main complaint about Netanyahu was this: After a decade in office, the prime minister is part of the problem. Israeli society is bitterly divided between left and right, religious and secular, Levi said. And he wants the country to choose someone new to help foster some unity.

Elisheva Krief has spent most of her 69 years in Rehovot. She was born in Israel and said that her parents are Holocaust survivors. What is her top priority for this election?

Krief said she voted for Netanyahu more than once in the past. But now? The prime minister could be indicted for corruption, so he needs to go, she said.

“He’s done. He finished his job. And lately, there’s a lot of corruption coming up."

“He’s done. He finished his job. And lately, there’s a lot of corruption coming up,” she said. 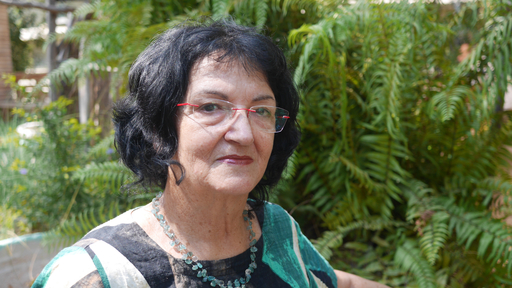 Elisheva Krief, 69, said she voted for Netanyahu more than once in the past. But this election, she says she's supporting the centrist party, Kahol Lavan.

Krief said she will vote for the centrist Kahol Lavan party, led by former army Gen. Benny Gantz. Her reasoning has to do with simple math. Gantz is part of the other largest party in Israel, alongside Likud. Kreif said she thinks they will be best positioned to form a stable government without bringing one of the Jewish Orthodox parties into a ruling coalition.

That is also an important issue for Tamar Gross. She was walking in Rehovot’s central shopping area with her partner, Naveh, and their 3-week old boy in a stroller. They said they will not be voting for Netanyahu because if he’s elected, Likud is likely to join with one of the conservative religious political parties in the next government.

“I really don’t mind that people will be religious and keep kosher and everything,” Gross said. “But I don’t think if someone wants to live a secular life …[that] he should live a religious life because of laws that were established, like, 50 years ago.”

But it is easy to find people in Rehovot who say they are sticking with Likud. Truck driver Gabriel Sabeiyev said his whole family is voting for Bibi. And so is he.

“There’s no else that can lead the country. He and Trump have a very good relationship. That won’t happen with Benny Gantz. I hope this time in, [Netanyahu] will be able to put together a government.”

Practical concerns can weigh heavily on the minds of Israeli voters, right up to the last minute before making a decision in the voting booth.

Itay Levi, the man at the watch shop, said that his wife was determined to vote against Netanyahu in the last election. But when she emerged from the polling station and he asked her who she picked, Levi said she went with Bibi in the end.

As Levi talked about some of the other choices in next Tuesday’s election, his attitude started to evolve.

“I think that Kahol Lavan, they are good people. But they don’t know how to lead the country,” Levis said. “They have military experience, but not leading experience, you know what I mean? This is why I’m a little confused with my choice.”

But after a few more minutes of conversation, things became clear for Levi. He said he voted for Netanyahu in April. And now?

“I think that Bibi is the most qualified,” he said, coming full circle in a matter of about 10 minutes. “I’m probably going to vote another time for Bibi.”