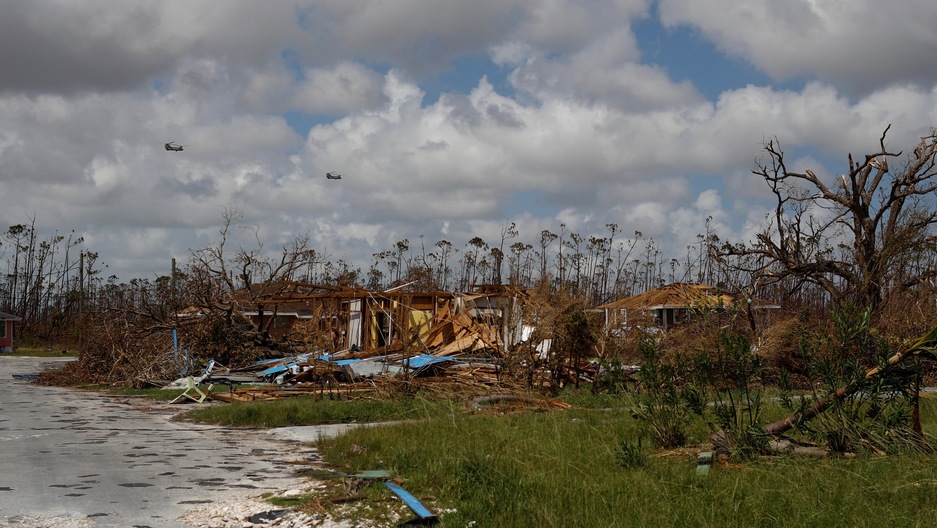 A volunteer of the NGO World Central Kitchen gestures as a helicopter leaves after delivering food for distribution, after Hurricane Dorian hit the Abaco Islands in Marsh Harbour, Bahamas, Sept. 10, 2019.

A storm system threatening the Bahamas with more heavy downpours and strong winds on Friday hampered the search for some 1,300 people missing in the wake of the worst hurricane in the nation's history and a massive humanitarian operation to help survivors.

The unnamed system, which had the potential of becoming a tropical storm, could drop up to 6 inches of rain through Sunday in some areas that were inundated nearly two weeks ago by Hurricane Dorian, forecasters said.

Winds were expected to reach 30 mph in the northern Bahamas, where the powerful and slow-moving Dorian flattened thousands of structures and left 70,000 people needing shelter, food, water and medical assistance.

The storm could frustrate relief efforts by delaying the movement of the "substantial amount" of food and water already on the ground, said Carl Smith, spokesman for the National Emergency Management Agency, during a news conference.

The storm is expected to pick up speed as it moves northwest on Friday and could reach Florida on Saturday, he said.

Related: How Dorian's destruction is hurting the Bahamas' most vulnerable

Daniel Gajewski is a rescue squad officer dispatched to the Bahamas from Fairfax County Fire and Rescue Department in Virginia.

"We're starting to put plastic sheeting all over houses and get them prepped and ready, since obviously, having gone through such a significant storm and another one brewing, we're trying to take precautions and see if we can at least prep the community and get them ready for a possible other storm that could move through here," said Gajewski, who is on the ground in Marsh Harbour in the Abaco Islands, which were hardest hit by Dorian.

"And then we've been working with the local government every day. A lot of reconnaissance of different areas, talking to the locals, trying to find out what their humanitarian needs are while also trying to help the rescue effort, as well. We're moving through a lot of debris, trying to find any potential live victims."

"And then we've been working with the local government every day. A lot of reconnaissance of different areas, talking to the locals, trying to find out what their humanitarian needs are while also trying to help the rescue effort, as well. We're moving through a lot of debris, trying to find any potential live victims."

Gajewski spoke with The World's host Marco Werman about the relief efforts there.

Marco Werman: That must be a really grim job. I mean, what does that entail?

Daniel Gajewski: A lot of hard work. You know, we're out there every day, every morning, all day, just trying to move through different areas and just try to cover the most ground we can. If we come across any human remains, our job is to go ahead and to mark the area and to go ahead and push that information back to the local government.

When you're going around the Abacos, what does it look like in some of the neighborhoods you were in today?

It depends on where you go. Some of the areas here in Marsh Harbour were completely flattened. All you see is a pile of sticks. Other areas, you know, homes are standing; the walls are still intact, for the most part, with just some small roof damage.

You're meeting people, I imagine, who are looking for loved ones or friends and neighbors. What do you tell them?

You know, it's hard. We're all human beings. I'm a father. A lot of the individuals on our teams are mothers and daughters and fathers and sons. So it's difficult. We all want to try to do as much as we can, and sometimes you feel like it's just not enough. But all we can do is go out there and try to give as much sympathy to them as we can. Try to listen to what their needs and their concerns are. And try to go ahead and push their local governments so we can go ahead and get them the proper resources and help that they need.

No doubt, one of the concerns, Daniel, is this new storm that's expected to come through the Bahamas. What is the forecast for how big and intense it's going to be?

And any sense of when it's supposed to arrive?

Sometime tonight, from my understanding.

So, the official statistics for the number of missing people has dropped by nearly half from 2,500 to about 1,300. How reliable are those numbers though?

I'd say it's pretty reliable. We have a lot of people on ground. We currently have a team of 57 that we split up and put out there.

That's a good question. And the local government here has identified that, as well. I don't have an answer for that. All we can do is again, we put boots on the ground.

So, what you've seen in the Bahamas over the last nine days, is this the worst you've experienced on any of these missions you've taken?