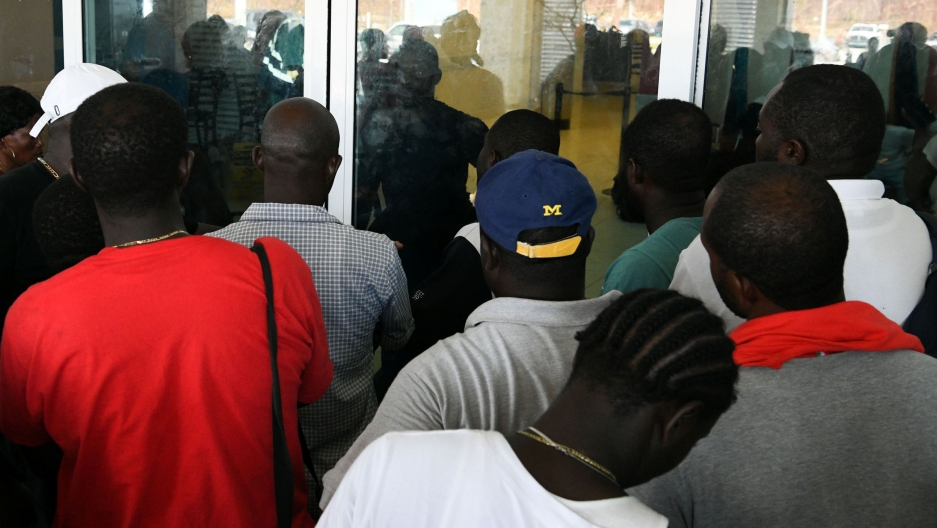 Residents wait at the airport in hopes of evacuating the island in the wake of Hurricane Dorian in Marsh Harbour, Great Abaco, the Bahamas, on Sept. 7, 2019.

Around 2,500 people are feared missing in the Bahamas in the wake of devastating Hurricane Dorian, a number that may include people who fled to shelters around the Caribbean island chain, authorities said on Wednesday.

More than a week after the top-of-scale Category 5 hurricane ravaged Great Abaco Island, Freeport and other parts of the tourism-dependent country, the number of those officially registered as missing was another sign the storm's death toll may rise significantly over the 50 reported so far.

"This list has not yet been checked against government records of who are staying in shelters or who have been evacuated," National Emergency Management Agency spokesman Carl Smith told a news conference. "The database processing is underway."

Related: The rescue effort in the Bahamas

Thousands of people are in shelters on the islands and officials have warned the number of dead is likely to rise substantially.

People all over Nassau are still searching for friends and family they have not seen since the storm.

"My friends are missing, a few of my cousins are missing over there, five in total, they lived in Marsh Harbour," said Clara Bain, a 38-year-old tour guide, referring to the Abaco town where officials estimate that 90% of homes and buildings were damaged or destroyed by the storm.

"Everyone on the islands are missing someone, it's really devastating," Bain said.

Dorian slammed into the Bahamas over a week ago as one of the strongest Atlantic hurricanes on record, packing top sustained winds of 185 miles (298 km) per hour.

Some 15,000 people are still in need of shelter or food, according to the Caribbean Disaster Emergency Management Agency.

Officials have already put up large tents in Nassau to house people made homeless by the storm and plan to put up tent cities on Abaco capable of sheltering up to 4,000 people.

Angelique Nixon is a professor at the University of the West Indies in Trinidad and Tobago. She was born in Nassau and published an essay in Stabroek News, a daily newspaper in Guyana. Nixon's essay, "When the Apocalypse is Now: Climate Crisis, Small Island Disasters and Migration in the Aftermath of Hurricane Dorian," focuses on how disasters like Dorian exacerbate inequality. She writes:

In the aftermath of the hurricane, both islands face a humanitarian crisis as people wait for rescue and relief efforts. Too many people have no drinking water, food, clothing, or shelter — basic needs. Too many people are traumatised, re-counting the stories of watching loved ones being pulled away by the tidal surge or drowning in attempts to get out of flooding homes and shelters. The stories are beyond heart-breaking and filled with apocalyptic horror — as people await rescue and relief, they share how they survived and how they watched others perish. It is almost too much, but we must bear witness and share in this grief and sorrow so that healing and recovery are possible. This is small island disaster, and there is nothing small about it.

Nixon spoke to The World's Marco Werman about what it felt to watch recovery efforts in the Bahamas and what more could be done.

"Well, it's been horrific, it's been heartbreaking," Nixon said. "I've an elder aunt and uncle, another family relative who live in a one-story home in Freeport and when we heard that the flooding had started, their phones died and we heard nothing for two days. So it was I was very, very stressful. I mean I can't even fully explain it."

Marco Werman: So, for very personal reasons you've been thinking a lot about this disaster but also for professional reasons, you wrote this article that was titled, "When the Apocalypse is Now: Climate Crisis, Small Island Disasters and Migration in the Aftermath of Hurricane Dorian." To what extent do you think climate change impacts the identity of the Caribbean as a region?

Angelique Nixon: You know, I've thought about these things for a long time, I've written about them. And we're seeing it — I mean we're witnessing it, we're experiencing it across the region with extreme weather, the rising sea levels, the changes in the environment, you know, everything. I mean we witness and experience that every single day, and now, we are — what I'm arguing — we're here, we're at that climate crisis. My concerns — and I raise this in the article —is really about those who are most vulnerable.

How does a storm like Hurricane Dorian make the vulnerable even more vulnerable?

We know that those who are already marginalized in different ways are going to experience the brunt of any post-disaster in very extreme ways. So, in particular, we're thinking about the elderly, migrants, in particular, undocumented migrants, women, children, of course, poor and working-class persons, persons with disabilities, anyone with a health condition. The disasters are not equalizers and climate change isn't going to affect everybody the same. I mean, that's something that we hear, "Oh, climate change is going to affect everybody." It is, but there's still a disproportionate impact. Disasters uncover existing inequalities and injustices, and for our region, we are born out of injustice and genocide and the trans-Atlantic slave trade.

And you're seeing the legacy of that history of slavery today in the response to the hurricane and who was impacted?

We have to take into account that these spaces have those historical injustices and those historical legacies that produced the inequality. Even a place like the Bahamas — the Bahamas is considered one of the richest countries in the region because we have a high GDP per capita. We have a small population and tourism, but that money doesn't stay in the country. The majority of people doesn't benefit from that wealth. And we have to think that the inequalities that exist, that are going to be, I think, exacerbated — and we've seen that again and again — after disasters.

So what needs to happen for people affected by the storm to heal now? Not just physically, but also emotionally, politically, socially as an entire region?

That's a really good question and honestly, something that so many of us are thinking about. I've been organizing with grassroots organizations that have long been doing work with those most marginalized and vulnerable. There are other organizations that really focus right now on basic needs: necessities, rescue, getting folks who need to be evacuated, people who need food, water, shelter, medicine, those are the basic things. But we also have to think about mental and emotional well-being because I've heard again and again people saying that folks are traumatized.

We also have a serious problem in the Bahamas, where Haitian migrants and Haitian bohemians make up the largest ethnic minority in our country and yet they are experiencing serious stigma and discrimination for many, many years. And now that this has happened where an entire Haitian community known as The Mudd and Pigeon Peas is entirely destroyed, completely devastated. We have to think about that — what does rebuilding look like for a Haitian migrant community, migrants who've come from one set of unlivable conditions to another? I'm very concerned about that community. I'm also concerned about other communities that already were disenfranchised or marginalized before the disaster, before the storm. So I think in any disaster if we focus on the communities and those who [are] most in need first, that is a way to rebuild. I think that prioritizing basic needs alongside spiritual, mental, emotional needs is also vital for recovering relief. I think that is at least one place to start.