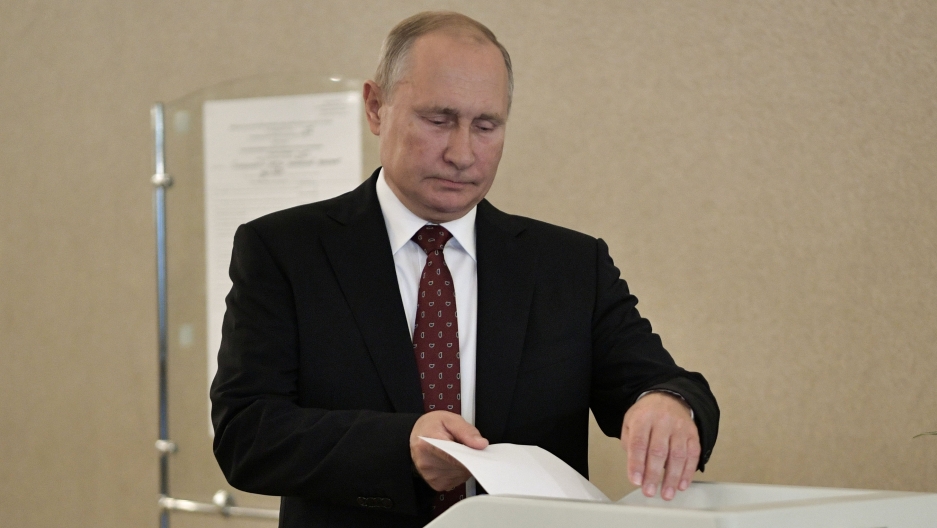 The results were part of a "smart vote" strategy orchestrated by the opposition. At the suggestion of opposition leader Alexei Navalny, many anti-Putin voters decided to vote for anyone other than a candidate from Putin's party, even candidates that voters might otherwise find distasteful.

"This was an experiment, and in those cities and regions where it was implemented for the first time, it worked very very well," Navalny said.

Related: Most leaders are in jail, but Russia's opposition plans more protests

The Kremlin has largely brushed the vote off. Kremlin spokesman Dmitry Peskov said, nationally, Putin's United Russia party won a vast majority of the elections. And while the party lost about a third of its seats in Moscow, it remains on course to hold onto its majority in the capital city.

There's a reason many voters voted like this. Election officials kept more than 200 candidates off the ballot for these municipal elections, effectively barring the opposition and sparking widespread pro-democracy protests.

Related: Even with most leaders in jail, Russia's opposition plans another protest

Konstantin Sonin is one of the voters who held his nose at the polls. Sonin is an economics professor at the University of Chicago and flew home to Moscow to cast his ballot. He spoke with The World's Marco Werman about the "smart voting" strategy.

"For the first time in my life, and I'm 47, I voted for a communist. This communist, his name is Nikolai Gubenko, when I was a kid he was famous in Russian movies because he played young Lenin," Sonin says. "I think he spent the last 30 years basically being a candidate in all kinds of local and national elections on the Communist Party Platform."

Marco Werman: Konstantin, why did you feel it was important to vote for him, regardless of how this election turned out?

What was your emotional, raw reaction to voting for a candidate you just disagree with?

I thought that it's a sort of a weird thing to do. But I also remembered that 30 years ago, when I was voting for the first time in the Soviet Union, I also participated in quite a weird voting. And when I was a kid, I would go to the election booths with my parents. In the Soviet Union, it was almost obligatory to vote. But there was always a single candidate. And the results would be that there was a 99% vote for this single candidate. So I have my experience of weird voting, so I have a kind of a flashback of these memories.

And how does it feel now to see the kind of "smart voting" strategy results where Putin and United Russia got crowded out in Moscow city elections, but it does kind of lead to a somewhat confusing Moscow City Council?

I very much hope that Putin and his administration, they will take this as a very strong signal that a lot of Russians, millions of Russians, millions of Muscovites need political representation; that there are a lot of young people who would want their voice to be heard. So, I think they need to suppress less the candidates of the opposition and allow opposition leaders to stand for parliament in the parliamentary elections.

We should not be surprised that Muscovites voted so overwhelmingly against Putin's party, but do you think that is going to kind of wash over the rest of the country?

But a lot of Russians outside of Moscow do, according to many reports, support Putin.

That's totally normal. I think what Muscovites want — they do not want to topple Putin with a single vote. They just want to have some representation, they want to have their candidates, the candidates that they want to vote for, in the local legislative bodies, in the national legislative bodies. They didn't get it, by the way. So the only thing that they got was to vote against basically against all candidates to support some candidates they didn't like but that were anti-Putin.

The opposition seems to embrace this idea of "smart voting" that Alexei Navalny has put forth. But do you think maybe the smart voting strategy was overblown, like the impact of it? What if voters, for example, genuinely liked the candidate that you did not?

Okay. I don't know. The main the main idea behind this smart vote was that the opposition didn't expect their leaders to be allowed to participate, and they were right about this. Most of the opposition leaders they spent half of the summer in jail or under arrest. So they were not able to participate in this election. So they devised this "smart vote" program, or idea.

Now my favorite outcome of today's election is that in one district, the winner was actually the spoiler who was the namesake of the real candidate who was barred [from] participat[ing] in the elections. ... He actually has beaten the Kremlin candidate. So this totally fake person, totally nobody — who had no campaign, no campaign materials, nothing — but he won because he was supported by the "smart vote."

So when it comes to the Moscow city council — are we now going to see a very odd city council with all these different candidates showing up?

So what do you think the opposition should or will do next? The protests we saw all summer ahead of the election — was that a one-time thing or do you think they're going to continue?

And you think that what happened, the kind of wave of political activism that we saw this summer in Moscow, you sincerely believe that can spread to the rest of Russia?