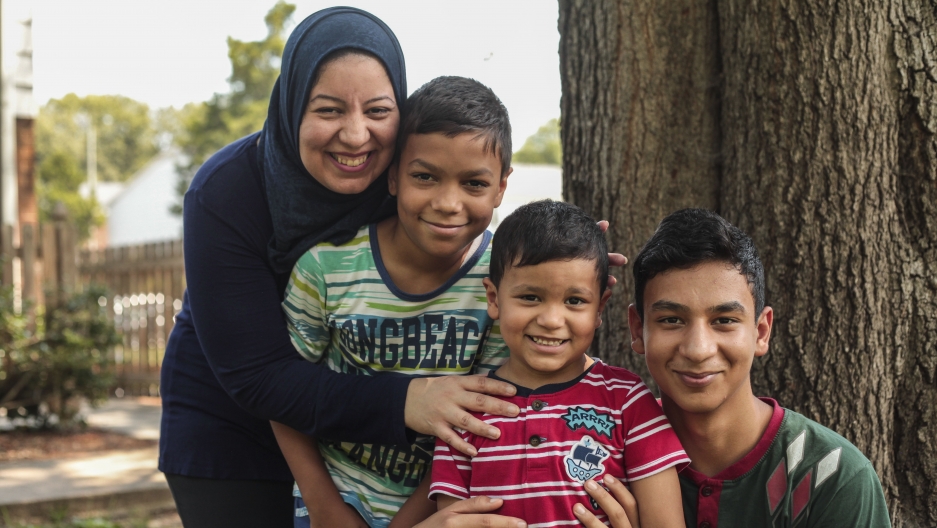 Growing up in Burundi, Blaise Pascal was fascinated with R&B music from the United States. As a teenager, he played guitar and perfected his singing pitch to the likes of Usher and Boyz II Men. According to Pascal, studying those lyrics helped him become fluent in English with no formal training.

Pascal, 31, never forgot this teen pastime. When he arrived in Greensboro, North Carolina, in February 2019, music helped him ease into his new life. It also helped that he was part of the Every Campus a Refuge (ECAR) program, an organization that provides housing and utilities for refugee families and individuals like Pascal. The organization was founded in 2015 at Guilford College and later spread to six other college campuses across the country. 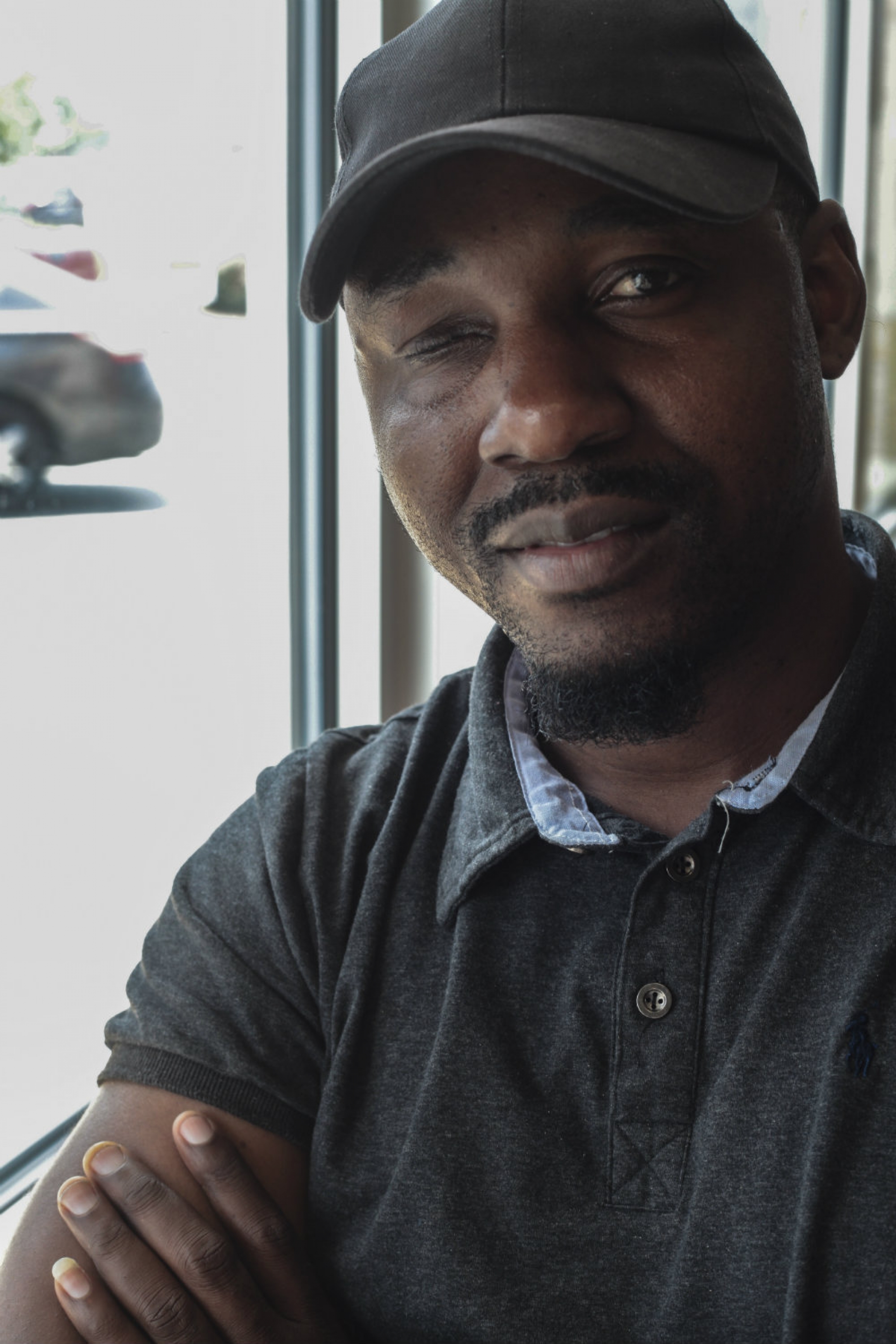 Blaise Pascal is a refugee from Burundi who arrived to the US earlier this year. While he's been able to enjoy the resources at Guilford College, where he got housing, he is still waiting for his sister, the only family he has left, to come to the US.

“The ECAR house is like those nurses who take a baby when he comes out,” says Pascal. “That means that on the first day, they started to show us how to make the first steps.”

Pascal also took advantage of the resources at his disposal at Guilford College, like the music room and soccer field. He met fellow musical minds, professors and students with whom he hosts regular jam sessions.

He would also send videos of himself singing and playing guitar with his new friends to his older sister in Burundi over WhatsApp. She is Pascal’s last remaining relative, and this is their first time apart. His sister raised him after their Congolese parents died when Pascal was still a young child. The siblings survived the civil war that their parents did not. Both have applied for refugee status; Pascal was resettled to the US while his sister waits.

“Africa means my past, America means my future. So my present — I want to put it together,” says Pascal. He says coming to America was a dream. But without his sister, it has left a “big, big darkness before me.”

But whether his sister will be able to come to the US is unclear. The Trump Administration is reportedly considering not accepting any refugees into the country in 2020, or possibly capping admissions at 10,000 to 15,000, with limits on certain groups. On Tuesday, officials plan to meet at the White House to discuss the future of refugee resettlement in the US.

In the past two years, the administration has reduced the number of refugees it said it would accept — from 110,000 in 2017 to 30,000 in 2019. And it’s unclear how further caps on admissions could affect refugees, like Pascal’s sister, who have already applied and are waiting to get into the US.

“To go to zero is an enormous blow to the refugee resettlement program,” says Diya Abdo, the English professor at Guilford College who created ECAR.

The possiblity of further caps is the latest example of the Trump administration’s effort to restrict the various avenues for newcomers to enter the US — as refugees, asylum-seekers and immigrants.

It’s also forcing resettlement agencies and supporting organizations like ECAR to rethink the future. Further cuts would be devastating to these organization, but there would be opportunities too, says Abdo — to re-focus efforts on refugee communities already in the US and finding ways to support them.

“There are ways to leverage our resources, always,” she says. “It’s important for campuses to continue to see themselves playing that role — that they’re not immune, they’re not insular, they’re not isolated, they’re not simply receiving. But they’re a mutual, reciprocal part of their communities and that they should step up.”

This year, the US admitted 24,697 refugees as of July 2019. But the administration's commitment to resettle 30,000 refugees this year is a historic low, according to the International Rescue Committee.

“Cases are still being scheduled and added, and we’re anticipating [August] to be quite busy,” says Megan Shepard, director of Church World Service Greensboro. She adds that at least 30 individual refugees could arrive through her office by the end of September. The administration typically announces resettlement cap numbers that same month.

On a global level, the number of people seeking refuge and asylum is at 70.8 million — an all-time high — according to the UN Refugee Agency. But a mere 7% of those seeking refuge have been resettled.

Related: These asylum-seekers won their refugee cases in Greece. Some wish they hadn't.

While the statistics leave advocates fraught with frustration, Abdo sees the current crisis as an opportunity.

“This is about supporting human beings who are seeking security. This should be framed always as hospitality and empathy, and it’s a way to diversify and enrich our communities.”

“This is about supporting human beings who are seeking security,” she says. “This should be framed always as hospitality and empathy, and it’s a way to diversify and enrich our communities.”

ECAR hosted its first family in 2016. To date, 50 individuals have lived in the Guilford College ECAR house and in on-campus apartments; 26 have been children, according to Abdo.

In 2015, she asked Guilford’s president Jane Fernandes for permission to use a house on campus, framing the project against the backdrop of the college’s Quaker history. The campus historically served much like a parish in supporting one another and the college was a site of refuge during the Underground Railroad.

“I had every reason to do it,” says Fernandes about ECAR. “So it was really a pretty quick decision for me.”

ECAR, which is funded through donations, has chapters actively hosting refugees in Pennsylvania, Georgia, Ohio, Florida and North Carolina — all private institutions.

Volunteers with ECAR are all Guilford College students, and they go through coursework with Abdo first. There’s also a minor track connected with ECAR. Student volunteers focus on the newly settled residents’ empowerment, rather than consuming the experience for their own benefit.

“ECAR works the way I like it to work because it’s never about the students,” says Abdo. “[The refugees] are not a source of education for you to mine for resources. They are not here for you to become a better person. To put it bluntly, we are doing a job.”

The benefits to the campus community come as an even exchange among the multi-layered experiences that ECAR individuals and other groups bring to Guilford, according to president Fernandes.

“It is actually to our great benefit to have refugees and international students here because that creates a holistic set of perspectives that allows us to make decisions and come to understand things authentically and with integrity.”

“It is actually to our great benefit to have refugees and international students here,” Fernandes says, “because that creates a holistic set of perspectives that allows us to make decisions and come to understand things authentically and with integrity.”

Greensboro, where Guilford College is located, is a city of about 280,000 residents and is considered a global gate city, where refugees from around the world have resettled for three decades. According to the Center for New North Carolinians, Guilford County is now home to an average of nearly 700 new refugees each year, the largest and most diverse population of refugee communities in the state.

Related: 4 years on, a Syrian refugee family still torn by US policy

Marwa Al-Khasrachi, her husband Ali and their three boys arrived in Greensboro from Baghdad on March 8, 2017, just two days after President Trump dropped Iraq from his contentious travel ban. The Al-Khasrachis were placed in the Guilford College house and given more than the allotted three months, since no one else was arriving.

Most families average three to four months at the ECAR house, and leave more self-sufficient than they started.

“That’s an ethos of Every Campus a Refuge — trying to empower our guests to make their own decisions,” says ECAR program coordinator Hali Kohls. “When immediately, the family says, ‘Yes, we’ve already saved the money, we picked out the [next] house,’ they are very eager to let another family use this house.” 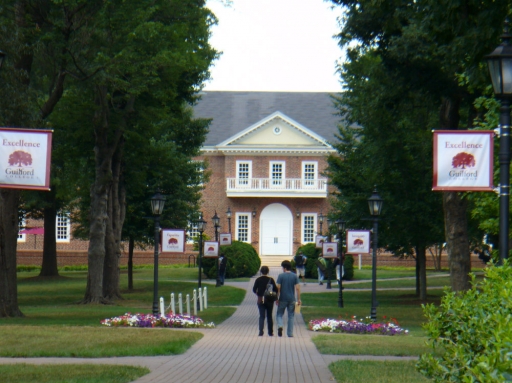 Every Campus a Refuge, a program that provides housing and utilities for refugee families and individuals, started at Guilford College. Some 50 people have lived at the college through ECAR.

For the Al-Khasrachis, the kids found immediate playmates within the community (which includes nearby housing for students who are also parents) that helped ease them into life in the US. The Al-Kasrachis fled Iraq after two assasination attempts against Ali for working with a company that contracted with the US military.

Marwa Al-Khasrachi and Abdo developed a friendship that has now withstood almost two years, one ECAR house and two apartments. Sharing an Arab heritage and rambunctious children close to the same age — Marwa is mom to three and Abdo to two — the mothers quickly became friends. In the two years since, they spend most Saturdays together at the park or running errands. Their youngest kids are nearly inseparable, and the two women are fast friends by now.

Marwa says she didn’t have continuity in friendships in Iraq, and they felt more circumstantial than cultivated.

"I didn’t believe in friendship, but now I do," says Marwa, with Abdo translating for her.

Abdo also didn’t expect to foster such close friendships through ECAR. But it’s personal for her. Her parents were Palestinian refugees who resettled in Jordan, where she was born. She moved to the US as an adult to pursue higher education.

“The experience of being a refugee and the feeling that you’re not home is something you’ve inherited,” she says. “When you’re a Palestinian, you never forget that.”

The relationships built and shared experiences with Abdo give the Al-Khasrachis a sense of normalcy as they overcome the hurdle of survival and learning to flourish in a new place.

Both Church World Service Greensboro and ECAR will continue their work despite what the government may decide — by focusing on supporting communities already here.

“We have so many community members who support our work,” says Shepard of CWS. “It couldn’t seem further than what that rhetoric is on a national level.”

“Our countries have created crises around the world that have produced forced migration,” Abdo says. “This is the time to stand up.”