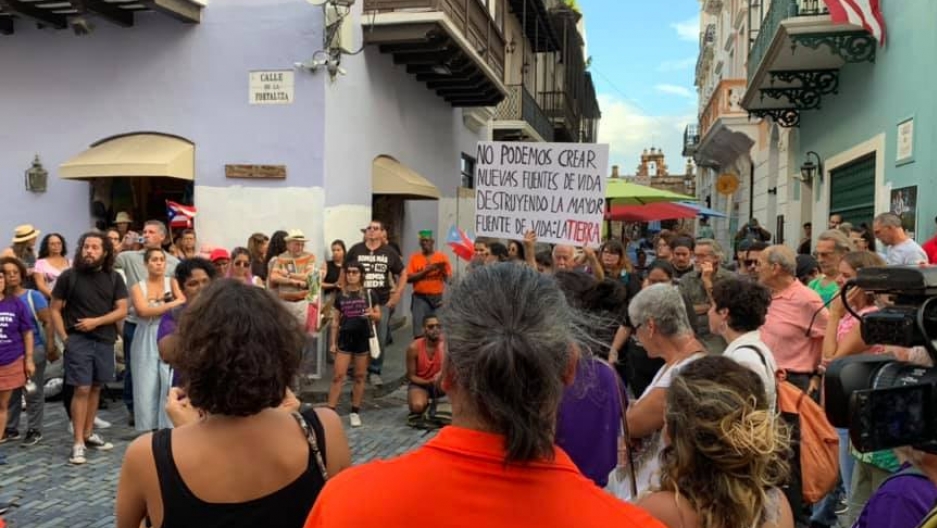 Hundreds of protestors massed outside La Fortaleza — the governor’s mansion — on the blue-cobblestoned streets of Old San Juan, Puerto Rico, on the evening of Aug. 19.

Many thousands of Puerto Ricans had gathered in this same spot for nightly protests over two weeks in July that resulted in the resignation of then-governor Ricardo Rosselló, in the wake of the release of damning chat messages.

Related: 3 governors in Puerto Rico? A plot twist beyond 'House of Cards.'

But this time, the issue was a proposed new land-use zoning map that could potentially speed up the development of — and radically transform — popular sites, such as the bioluminescent bay of Vieques, the coastal surfing mecca of Rincon, and the historically protected districts of Ponce and Old San Juan, as well as many more quotidian sites.

Puerto Rico’s state planning board presented the new map for public comment on July 15, at the height of summer when — even in calmer days — few would be paying attention to something to boring as land-use classifications.

That it was rolled out in the midst of an unprecedented political uprising might have doomed it to obscurity. Instead, it struck a nerve. 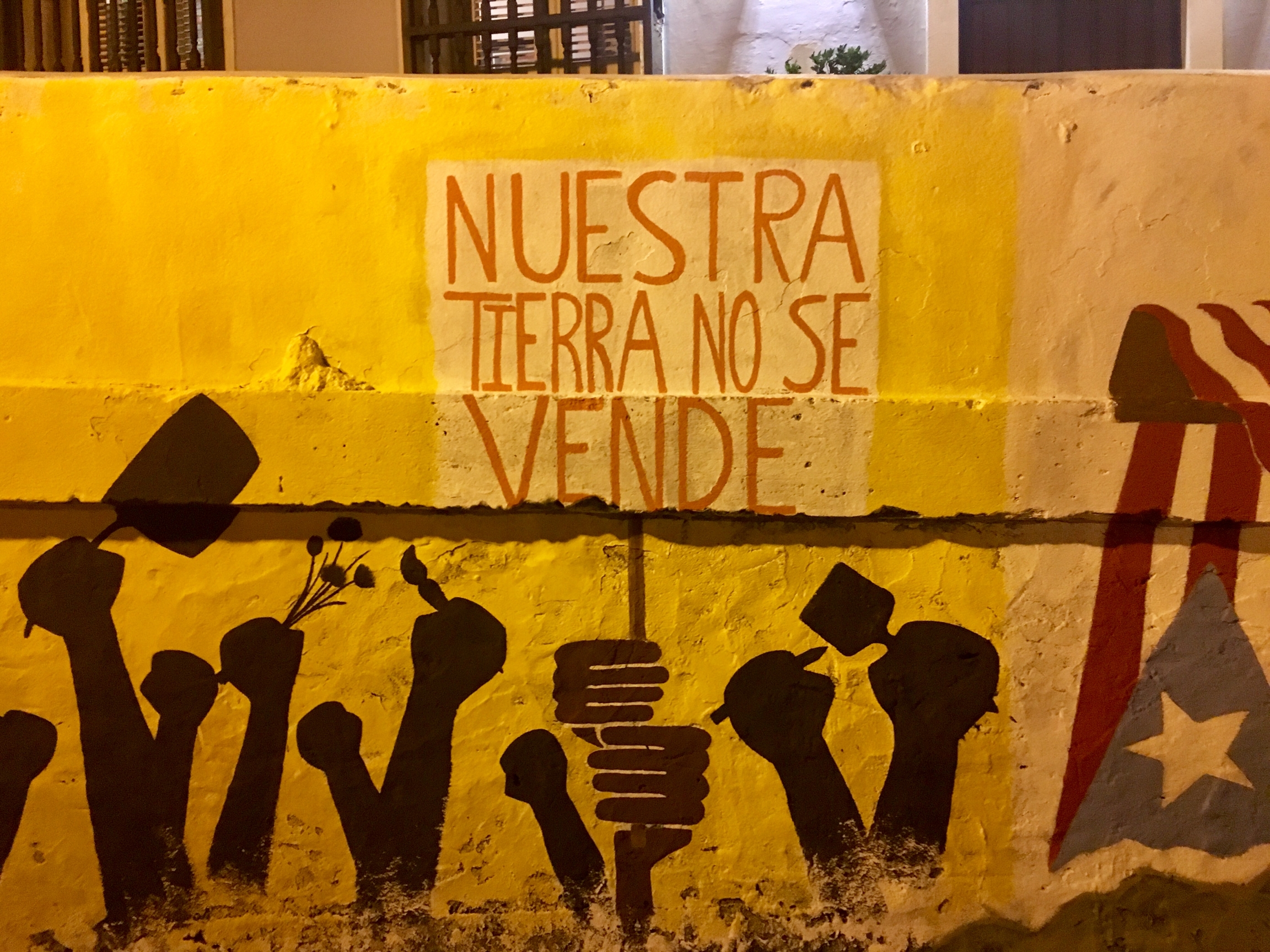 Street art along Calle Norzagaray in San Juan, Puerto Rico, reads "Nuestra terra no se vende" or "Our land is not for sale."

These protests, which come on the heels of a movement that forced Rosselló out and plunged Puerto Rico deeper into its ongoing political and economic crisis, have one goal in mind: to urge the country’s leaders to act in the interests of its citizens, rather than the interests of outside investors.

For a citizenry fed up with the corruption of the Rosselló administration and still reeling from the ongoing botched response by local and federal agencies to the catastrophe of Hurricane Maria, enough was enough.

“It was mind-blowing to see people walking around, defending the comprehensive land-use plan and taking ownership of all this."

“It was mind-blowing to see people walking around, defending the comprehensive land-use plan and taking ownership of all this,” says architect and urban planner Pedro Cardona Roig, one of the protest organizers. “I felt like I was watching something [urbanist] Jane Jacobs would see in New York.”

In mid-August, Cardona Roig launched a Change.org petition calling for the annulment of the new zoning map. He expected maybe 150 supporters. To date, it’s garnered more than 12,000 signatures. An Aug. 27 editorial in El Nuevo Día, Puerto Rico's major newspaper, called the new zoning measures “a map without a plan,” and charged it with threatening areas of historical, architectural, archaeological, natural, agricultural and landscape value. Another editorial three days later in the same paper called it “a mockery.”

The popular interest in something as wonky as zoning is indicative of a shift in Puerto Rican political participation. Public protest here is nothing new; at the turn of the 21st century, the successful movement to end the US Navy’s occupation of Vieques drew international attention. And over the last decade, Puerto Rico’s ongoing financial crisis has sparked increasing unrest.

Now, saddled with an unpayable debt that stands at $124 billion and under the control of a Fiscal Control Board (known as la junta or “the board”), public frustration is mounting. La junta, appointed under the Puerto Rico Oversight, Management, and Economic Stability Act (PROMESA), and signed in 2016 by former US President Barack Obama, has drawn ire across the island. For the past several years, citizens have taken to the streets during San Juan May Day marches to protest la junta and called for a debt audit. In 2017 and 2018, these marches ended with police firing tear gas at protesters.

Paving the way for investors

In the wake of Hurricanes Irma and Maria, Puerto Rico’s political and business class see tourism and tourism-driven development as the best and fastest way to generate revenue.

Earlier this year, 98% of the island was approved as an Opportunity Zone, a program created under President Donald Trump’s 2017 tax plan that provides significant incentives for investors designed to stimulate development in low-income census tracts, or areas.

Interest groups are now scrambling to secure some of the approximately $20 billion in Community Development Block Grant Disaster Recovery (CDBG-DR) funding approved by the Department of Housing and Urban Development after Irma and Maria to invest in Puerto Rico under this act. The proposed new zoning map, critics contend, is just the next step in making it easier for outside developers to do business.

“The logic that I see that the government is using for this kind of policy is that they need new income to pay the debt. ... So, this is just another austerity measure in order to not service the people, but to service the debt.”

“The logic that I see that the government is using for this kind of policy is that they need new income to pay the debt,” says David Carrasquillo, vice-president of the Puerto Rican Planning Society. “So, this is just another austerity measure in order to not service the people, but to service the debt.”

In 2015, Puerto Rico passed a comprehensive land-use plan that builds on the Autonomous Municipalities Act of 1991, which gave the country’s 78 municipalities latitude to set their own planning based on the unique needs of each community, be they rural, urban or coastal. The proposed new map aims to consolidate many different land use categories and open up new possible uses in areas previously zoned as natural resource areas, as well as agricultural lands and residential areas.

Overall, notes activist Katia Aviléz-Vásquez, 99,000 cuerdas of land (a unit of measure equal to just under an acre) could lose their protected status; 1.38 million cuerdas would see some change to their permitted use.

“You are allowing not only more uses, but more aggressive, intensive uses in terms of density and parameters of construction,” notes Carrasquillo. For example, land currently zoned for agriculture could now also be used for renewable energy. “But you can't have a solar farm and grow food in the same space, it’s impossible.”

“With the idea of promoting construction and development, we are sacrificing an ordered growth of our agriculture,” he said. “This plan dislocates that and creates problems that could affect the food security of our country.”

Furthermore, notes Carrasquillo, new development is a short-sighted solution to Puerto Rico’s problems; long term, he says, the effect will be not just to degrade Puerto Rico’s prime tourist attraction — its natural beauty — but raise the cost of living overall.

"People understand the ramifications and implications that this has on their daily lives,” he says. “They are very worried that this policy intersects with housing, it intersects with economic development, and people understand that all of these plans are not for them.” If the plans are approved, he predicts, they will only accelerate the ongoing displacement of poor and working-class Puerto Ricans.

“We want to make clear what is being established are equivalences between [already-established] districts, and [defines] new ‘zoning’ qualifications to give uniformity to land uses.”

On Aug. 4, Maria del Carmen Gordillo, president of Puerto Rico’s planning board, announced that in response to public pressure, she was extending the original two-week period for public comment through Sept. 9. In an emailed statement to The World, a representative pushed back forcefully against the charge that the proposed changes were in violation of the 2015 land use plan: “We want to make clear what is being established are equivalences between [already-established] districts, and [defines] new ‘zoning’ qualifications to give uniformity to land uses.”

On the evening of Sept. 1, around 250 people met in the Placita Roosevelt plaza for the latest in a series of peoples’ assemblies — experiments in direct democracy that sprang up around the island in the aftermath of the #rickyrenuncia movement to pressure then-Gov. Rosselló to resign. 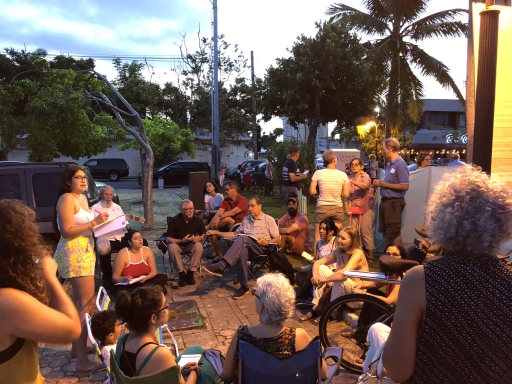 Peoples’ assemblies are experiments in direct democracy that have sprung up around Puerto Rico.

“The zoning map is a disgrace for this country."

“The zoning map is a disgrace for this country,” said one of the coordinators, Luz Cuadrado-Pitterson. “It is the difference between us continuing to be the owners of the little that remains, or losing control of the most important thing for a human — the land, the environment … That law is disastrous, and it must be revoked.”

“The assemblies of the people are a marvel,” she added. “It is an organic process that has come out of the summer revolution but embraces all of the sectors — all races, ages, interests. Above all, it is a wake-up call to defend what is ours.”