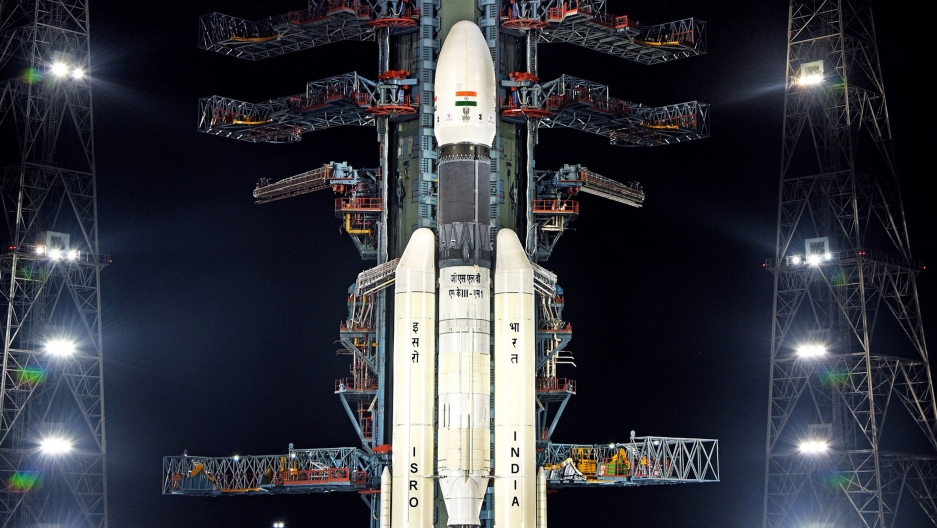 Chandrayaan-2 sits on a launch pad at the Satish Dhawan Space Centre in in Sriharikota, India, on July 22, 2019.

The Indian Space Research Organization is speeding toward history on Friday as its second lunar mission, Chandrayaan-2, is expected to touch down near the moon’s south pole.

If successful, Chandrayaan-2’s landing site would be the southernmost spot on the moon to be visited by any spacecraft, and make India the fourth country to complete a landing on the moon.

Regardless of the outcome in space — according to the ISRO, the success rate for soft landings on the moon is 52% — India’s unmanned lunar mission has already made history: It's the first space mission led by two female scientists from the ISRO.

Their contributions to the South Asian country’s lunar mission is a “giant leap for womankind,” one Twitter user said.

Muthayya, Karidhal, and a reported 300-person team at ISRO launched Chandrayaan-2 on July 22. Shortly before the launch, ISRO Chairman K Sivan said in a press conference that "nearly 30% of the members working on the Chandrayaan-2 mission will be women.”

Chandrayaan-2 mission director Karidhal previously told Indian media it’s important to “have confidence in your capability without giving your gender much thought. Be focused on your goal and work with complete dedication."

Aashima Freidog, co-founder of The Life of Science, a feminist project looking at inclusivity in the Indian science community, said this is “a great moment for women and science in India.” 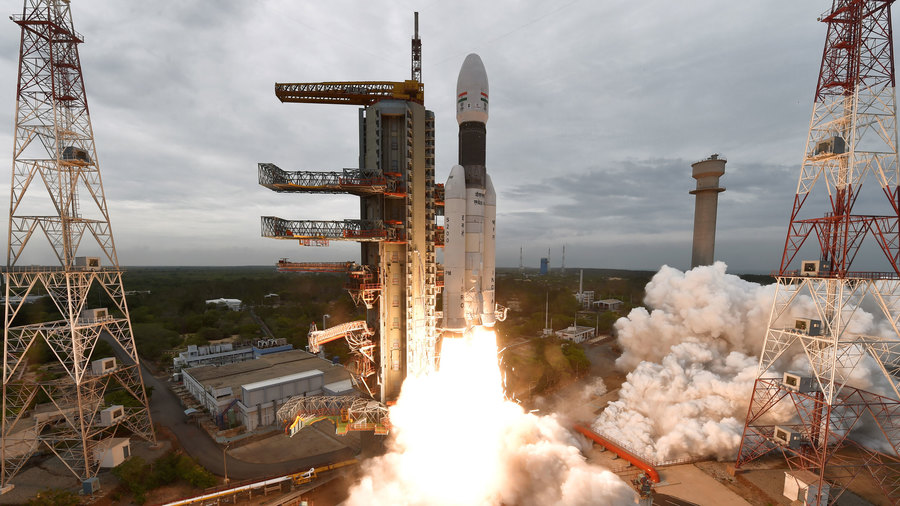 Chandrayaan-2 launches from the Satish Dhawan Space Centre in Sriharikota, India, on July 22, 2019.

“[Muthayya and Karidhal] are really being seen — these amazing scientific role models that have been hidden from the public eye,” Freidog said. “We're seeing this, really, for the first time in the public imagination and this is a really big deal and a great moment.”

The journey for gender equity in India is far from over. Freidog said it’s important to keep in mind the context in which these women are succeeding: ISRO has never had a female chief. Outside ISRO, Freidog added, “only 9-14% of the scientific workforce is made up of women.”

“Presently in India, there is a lot of bias against professional women and Indian women in general. There is a lot of stereotyping and that kind of just brushes past the serious issues that actually are keeping women away from science.”

“Presently in India, there is a lot of bias against professional women and Indian women in general,” Freidog said. “There is a lot of stereotyping and that kind of just brushes past the serious issues that actually are keeping women away from science.”

Freidog said Indian media has put the scientists' achievements into an antiquated narrative.

“There's stereotyping that's dragged along, which is, ‘Look at these women. They made rockets and they're sending things to the moon despite their domestic duties,’” she said, adding that placing women in more visible roles is imperative to achieving equality. “When ISRO is doing the press conferences, even though the program director and the mission director [are] women, we don't really see them on stage or taking questions. So this is problematic because it reinforces the stereotype that women have to be wiped out by men in positions of power and in important things like sending something to the moon.”

Earlier this week, ISRO scientists Muthayya and Karidhal separated Chandrayaan-2's lander, Vikram, from the orbiter and sent it on its own journey to the moon. Since then, Vikram has been rotating around the moon, getting closer to the surface and preparing to land. 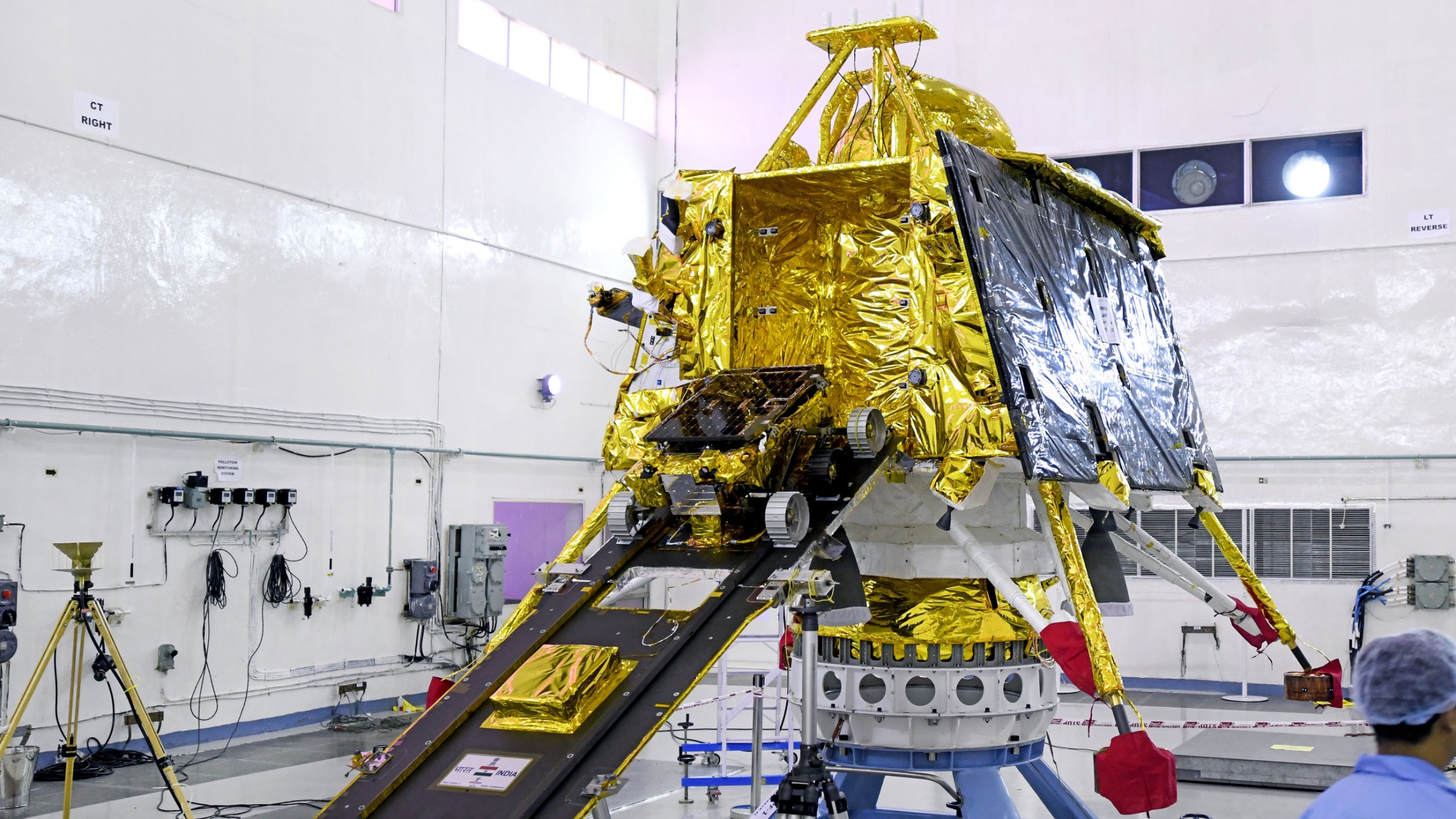 ISRO sent Chandrayaan-2 to the south pole after the first lunar mission revealed signs of water ice buried in craters. Scientists hope Chandrayaan-2 can reveal the amount and distribution of ice with hopes of mining it and turning it into drinking water or even fuel for spacecraft.

"It’s just a fantastic bold, bold mission where mankind has not — people have not gone before, down to the south pole of the moon. So it would be absolutely incredible,” Linenger said. “It’s already absolutely incredible that you’re circling the moon. That is a very tough task. So, no matter what the outcome, it’s still a success for the planet. And not just for India."

Chandrayaan-2’s lander, Vikram, is expected to touch down near the moon’s south pole between 4-5 p.m. EDT today. The lander's rover will roam the moon for 14 days.

India plans to send humans into space by 2022.