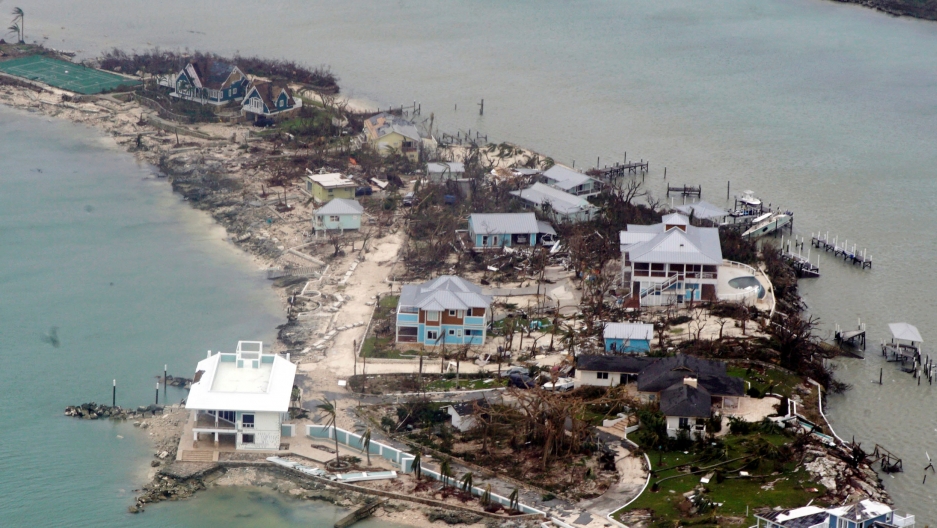 An aerial view of damaged houses seen from a U.S. Coast Guard aircraft in the aftermath of Hurricane Dorian, in Bahamas on Sept. 3, 2019.

Rescuers searched for survivors in the Bahamas on Wednesday after Hurricane Dorian, the most damaging storm to strike the island nation, left in its wake a flooded landscape dotted with pulverized homes and beached boats.

The scope of the damage and humanitarian crisis was still unfolding as aerial video of the Abaco Islands in the northern Bahamas showed wide swaths of destruction and officials warned the current death toll of seven was likely to rise. Aid agencies estimated that tens of thousands of people would need food and other support.

"We are in the midst of one of the greatest national crises in our country's history. No effort or resources will be held back."

"We are in the midst of one of the greatest national crises in our country's history," Bahamas Prime Minister Hubert Minnis told a news conference. "No effort or resources will be held back."

Some storm victims remained on rooftops, awaiting rescue, according to media reports early on Wednesday.

"We can expect more deaths to be recorded. This is just preliminary information," Minnis said.

"Marsh Harbor has suffered, I would estimate, in excess of 60 percent damage to their homes," Minnis said, referring to the port on Great Abaco. 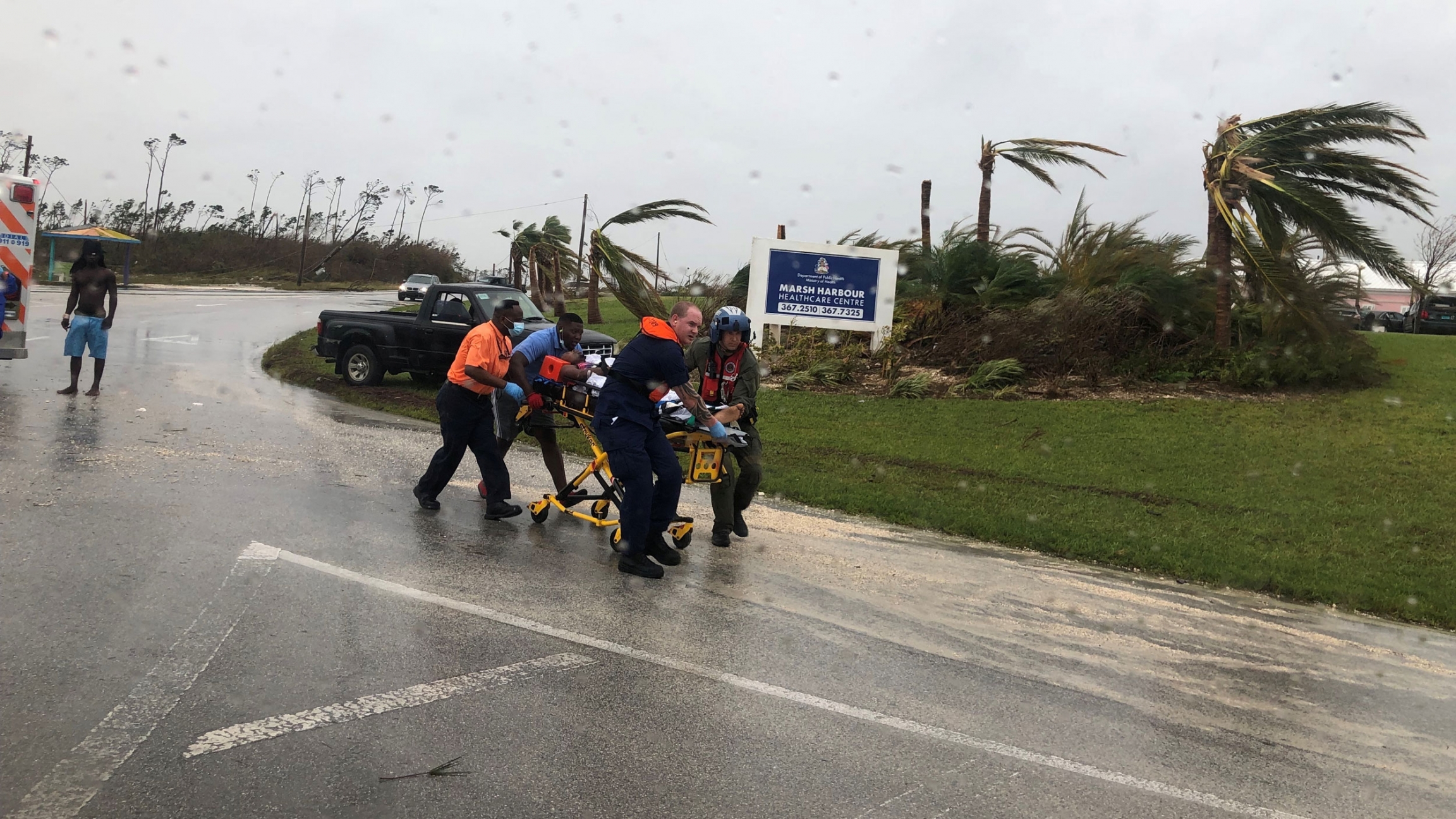 US Coast Guard personnel help medevac a patient during Hurricane Dorian in the Bahamas on Sept. 3, 2019.

"The Mud, as we know, has been completely destroyed or decimated," he said referring to a shantytown.

Aerial video of the Bahamas' Great Abaco Island showed miles of flooded neighborhoods, littered with upturned boats, and shipping containers scattered like toys. Many buildings had walls or roofs partly ripped off.

"Victims are being loaded on flatbed trucks across Abaco," one Twitter user with the handle @mvp242 said, describing a rain-blurred photograph of limp bodies strewn across a truck bed.

Other posts on Twitter said entire communities were swept away.

After rampaging through the Caribbean as one of the most powerful hurricanes ever recorded, Dorian wind speeds dropped on Tuesday to make it a Category 2 storm on the five-step Saffir-Simpson intensity scale. It maintained that level on Wednesday, but forecasters warned it was still dangerous.

Residents of coastal Florida, Georgia and South Carolina were bracing for Dorian's approach on Wednesday, with the National Hurricane Center warning the slow-moving storm could make landfall in South or North Carolina Thursday or Friday.

Georgia Governor Brian Kemp extended a state of emergency to cover 21 counties as the storm tracked north towards its coast. The emergency covers more than 900,000 Georgia residents, of whom over 400,000 have been ordered to evacuate, according to the state Emergency Management and Homeland Security Agency.

Hurricane-force winds had expanded to 60 miles (100 km) from the storm's core.

Heavy rains and storm-surge waters moving inland could cause life-threatening flash floods, the NHC said. The risk extended from Jupiter, Florida., to Surf City, North Carolina. Tornadoes were possible along the Florida coast, with the risk later moving to Georgia and South Carolina.

With telephones down on Abaco and Grand Bahama islands, residents posted lists of missing loved ones across social media sites.

A single Facebook post by media outlet Our News Bahamas seeking the names of missing people had 1,600 comments listing lost family members since it went live on Tuesday.

'Force of a thousand sledgehammers'

The exact toll in the Bahamas will not be clear until the storm passes and rescue crews are able to access devastated areas, said Theo Neilly, the Bahamian consul general in Washington. 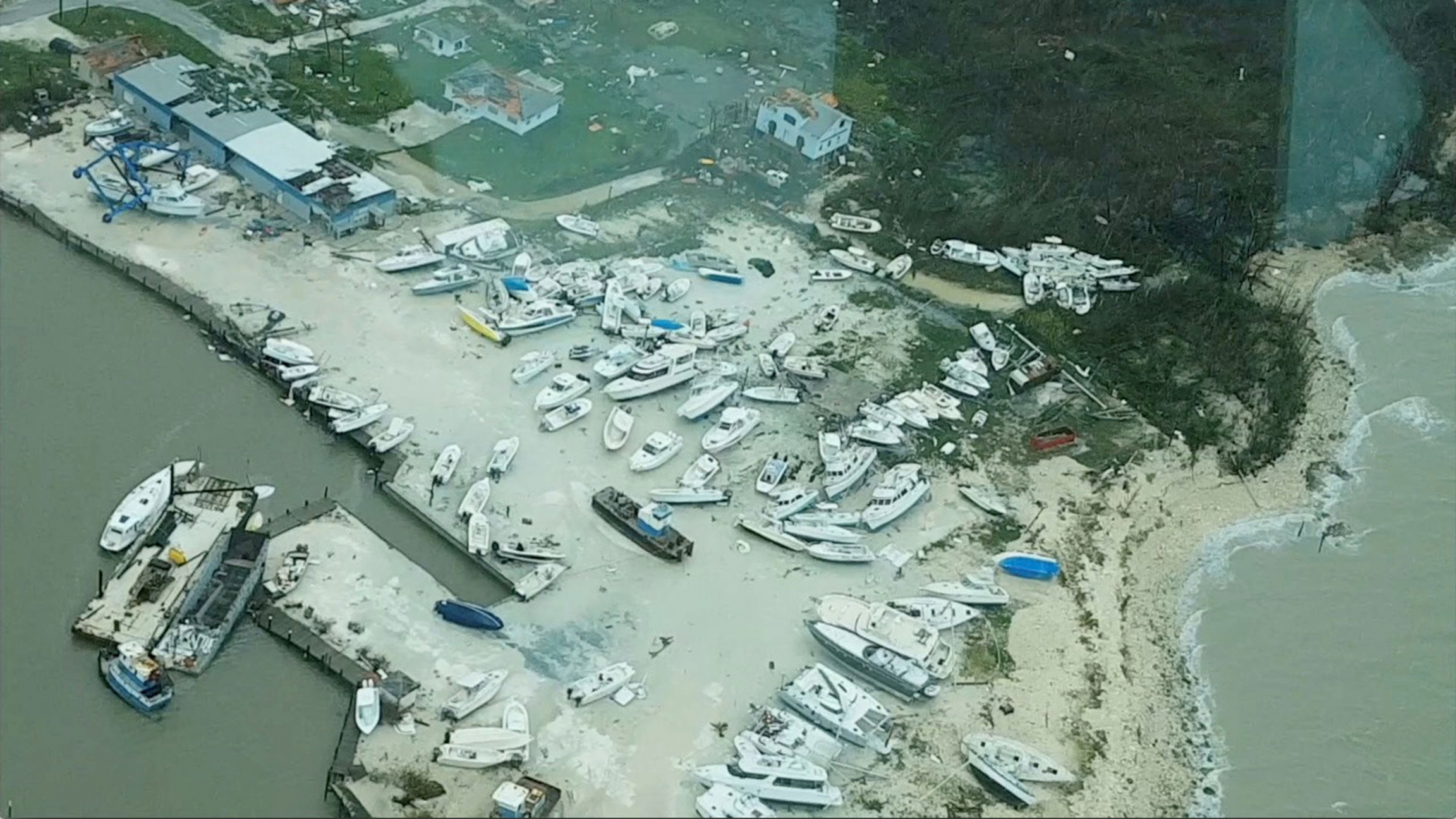 An aerial view shows devastation after hurricane Dorian hit the Abaco Islands in the Bahamas on Sept. 3, 2019.

As many as 13,000 homes in the Bahamas may have been destroyed or severely damaged, the International Federation of Red Cross and Red Crescent Societies said, in the strongest storm to hit the Bahamas.

Josh Morgerman, who went to the Great Abaco Island on Aug. 31, said Dorian was the most intense storm he had experienced in three decades of chasing hurricanes.

"Thought I was playing it safe by riding it out in a solid-concrete school on a hill in Marsh Harbour," he said on Twitter. "Thought wrong ... Winds pounded the building with the force of a thousand sledgehammers."

When the storm's eye passed over the island, Morgerman said he fled to a better-built government building that he found filled with others who had escaped collapsed houses.

Food may be required for 14,500 people in the northern Bahamas' Abaco Islands and for 45,700 people in Grand Bahama, the U.N. World Food Programme said. The preliminary estimates were based on an assessment by representatives of Caribbean nations, the WFP and other groups.

Many Florida residents were relieved on Wednesday as their state was spared the worst of Dorian's wrath.

"This storm wasn't bad as I thought it was going to be. The winds have been pretty tame," said Andres Cuartas, 46, who owns rental homes in Jacksonville Beach. "By the size of the storm, I was a little bit worried. I panicked when it was in the Caribbean, when they had it at a [category] 5."

People crept back into Jacksonville Beach as Florida appeared to be escaping the worst of the storm, with a couple of people seen surfing by its pier on Wednesday morning.