Editor's note: This story was originally featured on The World on September 3rd, 2019 and rebroadcast for a Thanksgiving special. Reporting for this story was made possible by a fellowship with the Institute for Journalism & Natural Resources.

Transforming the Mississippi River into a highly efficient shipping corridor has brought some steep costs to the environment and wildlife and cities and towns along the river. This past spring and summer, cities and farms near the river were besieged by record precipitation and flooding. Damage and lost income was costly, and sure to reach many billions of dollars. But it could’ve been far worse. The complex river system, one of humanity’s greatest civil engineering feats, largely held.

But the challenges confronting the Mississippi are only growing more intense with the added impacts of climate change — wetter weather in the Midwest, more intense hurricanes, and sea level rise — leaving many people along the river worried about how much more the river system can endure.

The World’s Jason Margolis recently traveled nearly 1,100 miles down large swaths of the Mississippi River from Dubuque, Iowa, to Buras, Louisiana (60 miles south of New Orleans). Along the way, he also passed through Missouri, Illinois, Tennessee, Arkansas and Mississippi. Here are some images from his trip along with comments from river stewards he talked to along the way. 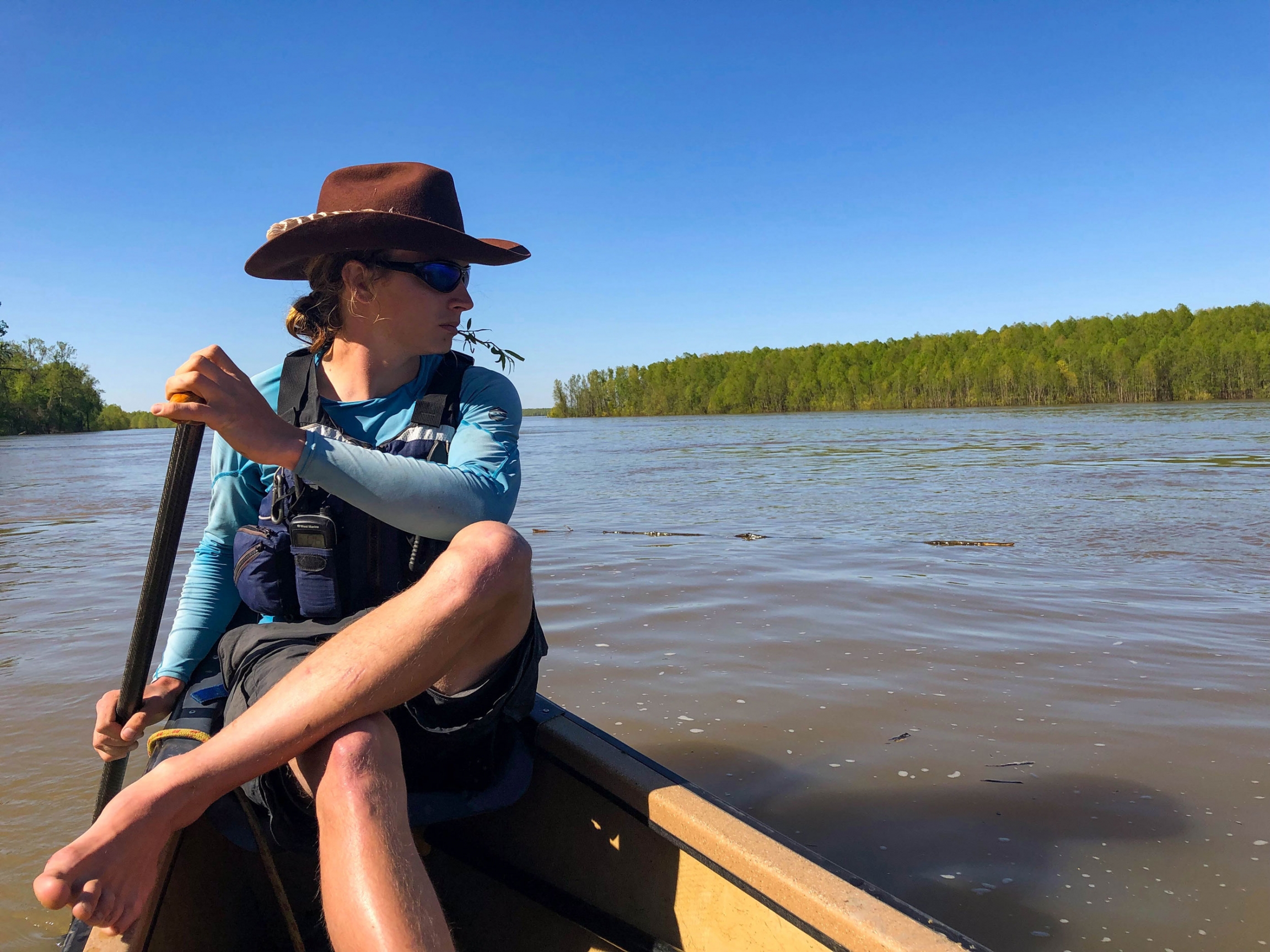 Canoe guide Tanner Aljets with the Quapaw Canoe Company paddles through an area of Helena, Arkansas, which would normally be dry land. It took about an hour to reach the actual river. “There's normally not any water back here, just a bunch of willow trees,” Aljets said. “Right now, it’s all water; water is all you can see.” 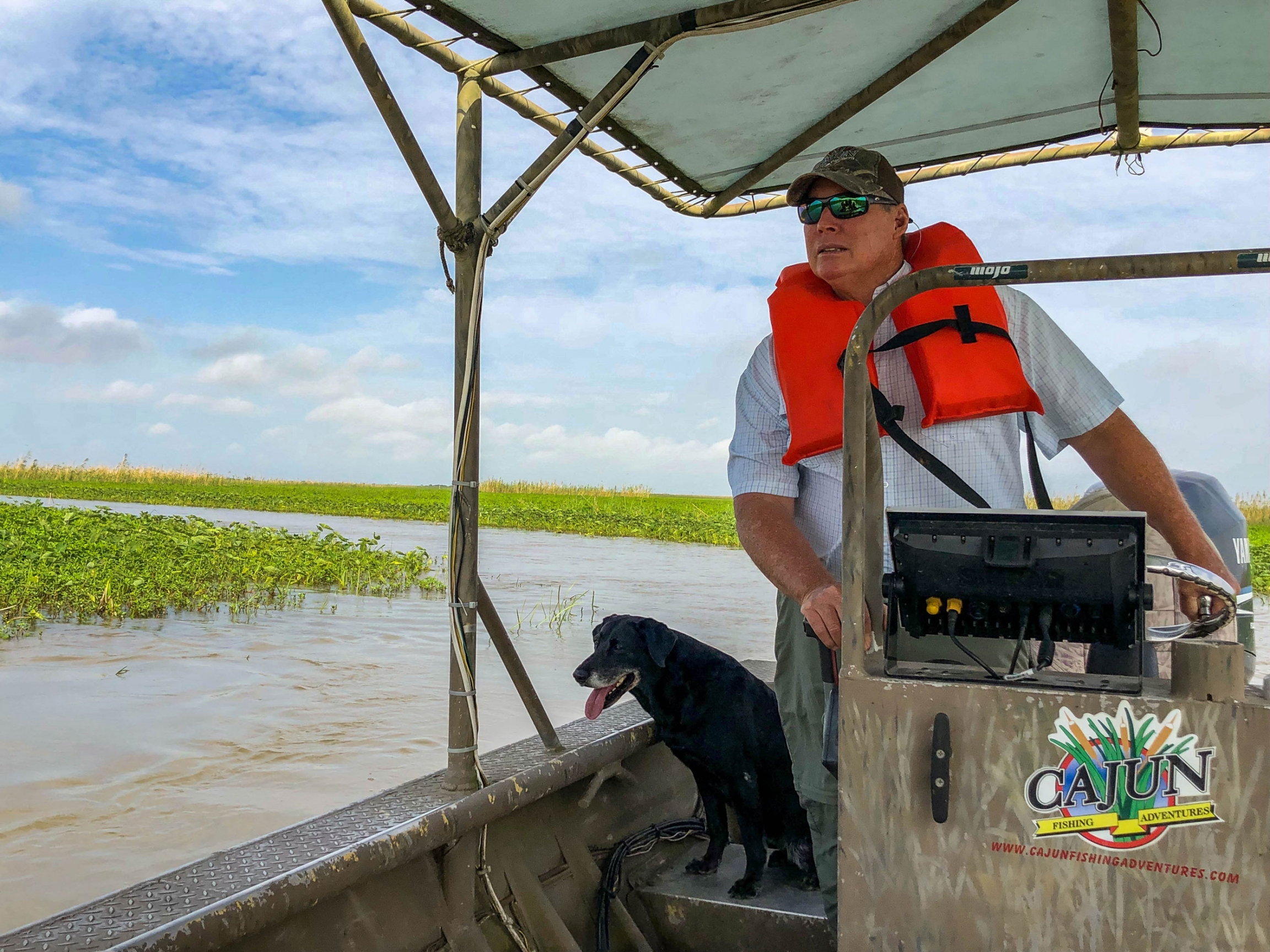 Ryan Lambert, owner of Cajun Fishing Adventures, runs duck hunting and fishing tours with his black Labrador retriever, Logan, by his side, out of Buras, Louisiana, about 60 miles southeast of New Orleans. A century ago, the Mississippi River Delta was an area of vast, coastal marshes. But as the Mississippi River system has been engineered and shackled, much of the dirt and sand from Northern states, which historically replenished coastal Louisiana, no longer makes it there. “If you look at what we’ve lost, and you see what’s left here, in the next 50 years, it will all be gone,” Lambert said.

Related: As flooding increases along the Mississippi, how should communities respond? 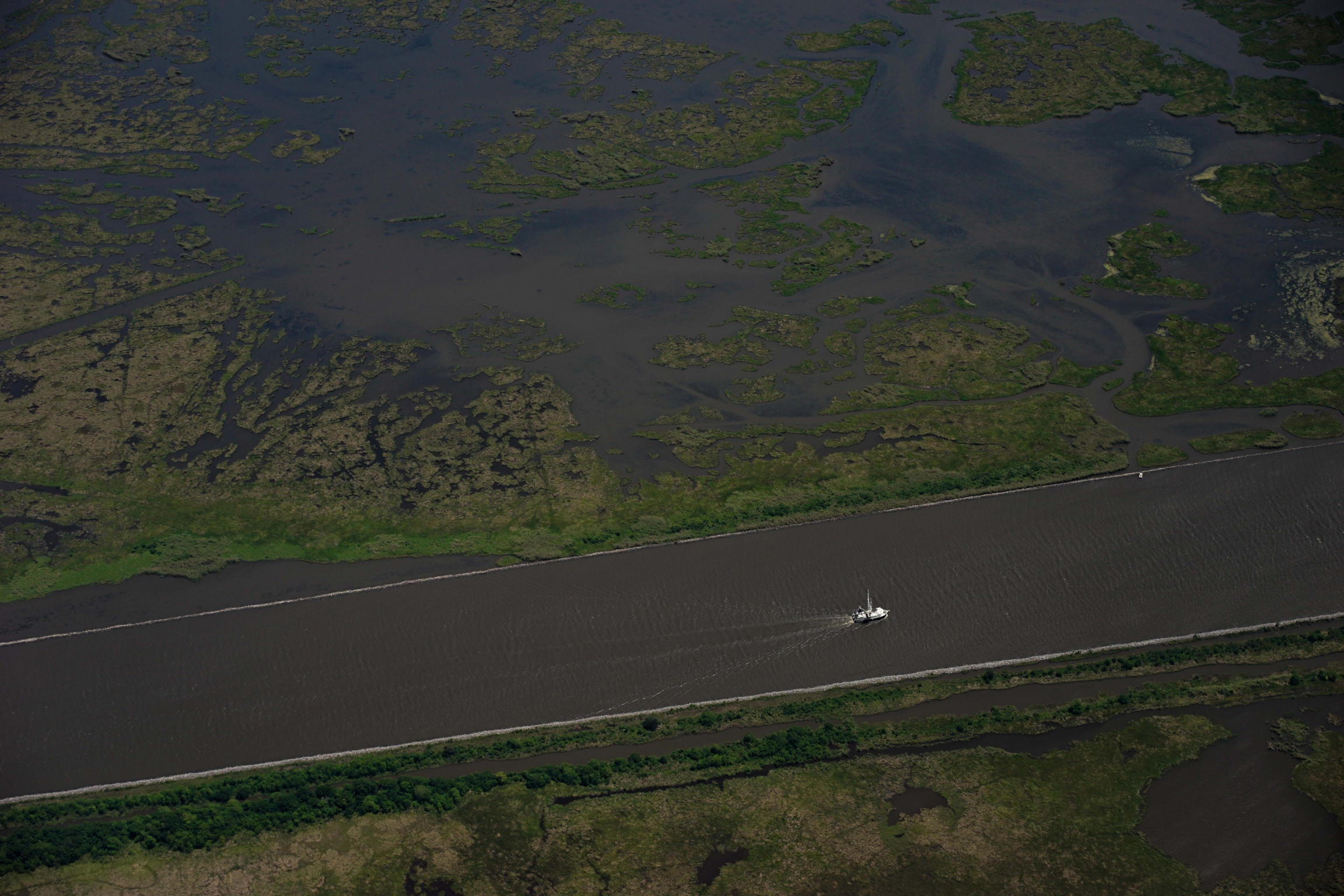 Vast stretches of the Mississippi River no longer resemble a natural river system, but rather, a canal straitjacketed by levees and walls. Levees protect cities. But river constriction also means that water no longer fans out beyond riverbanks as it naturally would, and the river can become like a clogged artery. During years of heavy precipitation, as in 2019, water levels can get dangerously high, causing flooding. High water can also make boat travel and the flow of trade precarious.

“This is water filled with all kinds of unspeakable things because it's coming out of sewers; it’s coming out of everywhere. It’s got everything in it — waste, everything — so, it’s not something you want to go frolicking through at all.” 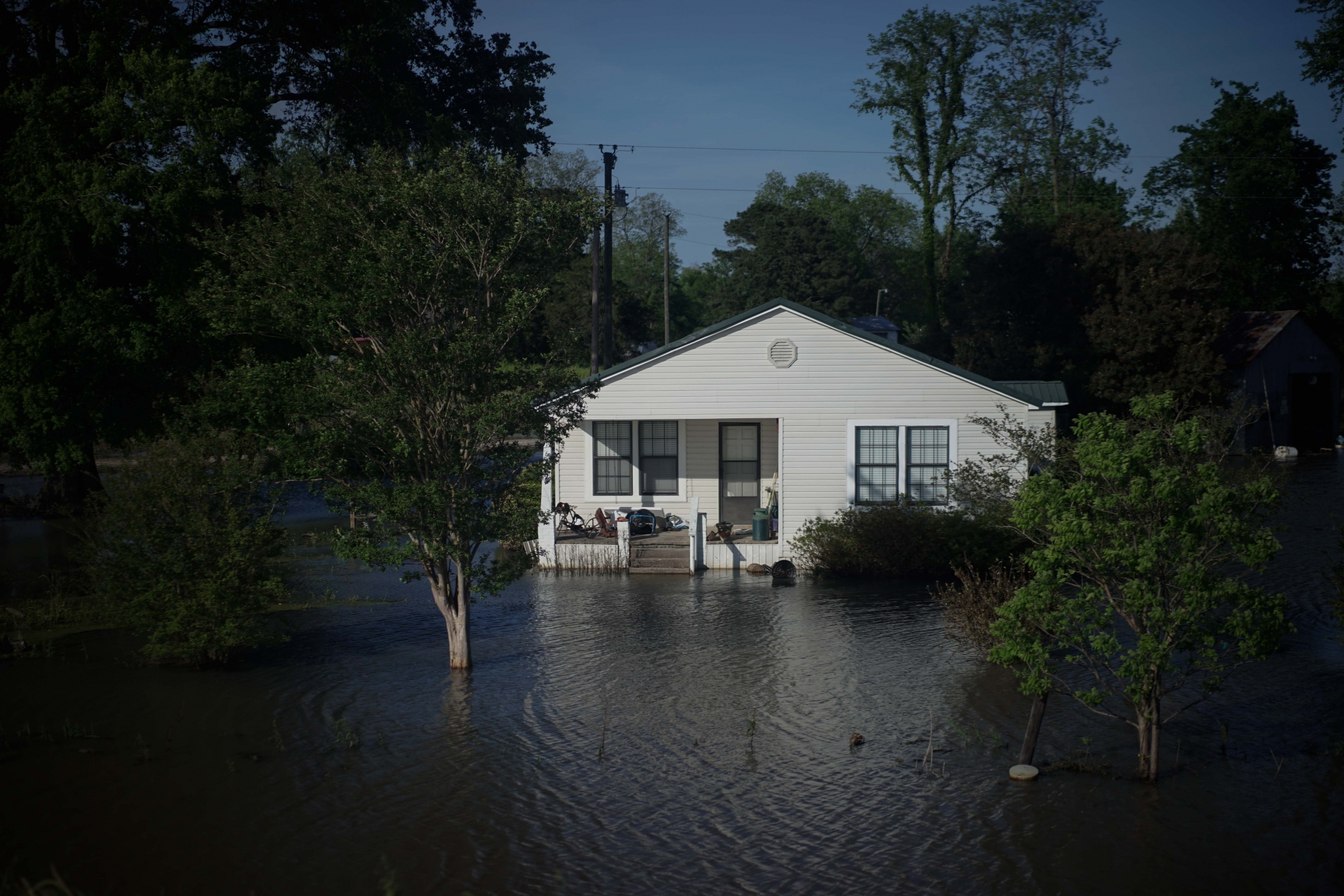 July 2018 to June 2019 was the wettest 12-month stretch in the recorded history of the continental US, fueled by record precipitation throughout parts of the Midwest. Much of that rainwater and snowmelt made its way into the Mississippi drainage system and headed south. Near Vicksburg, Mississippi, the river was above flood stage from February through the end of July. Tributaries like the Yazoo River backed up and spilled over, flooding homes in places like Redwood, Mississippi. 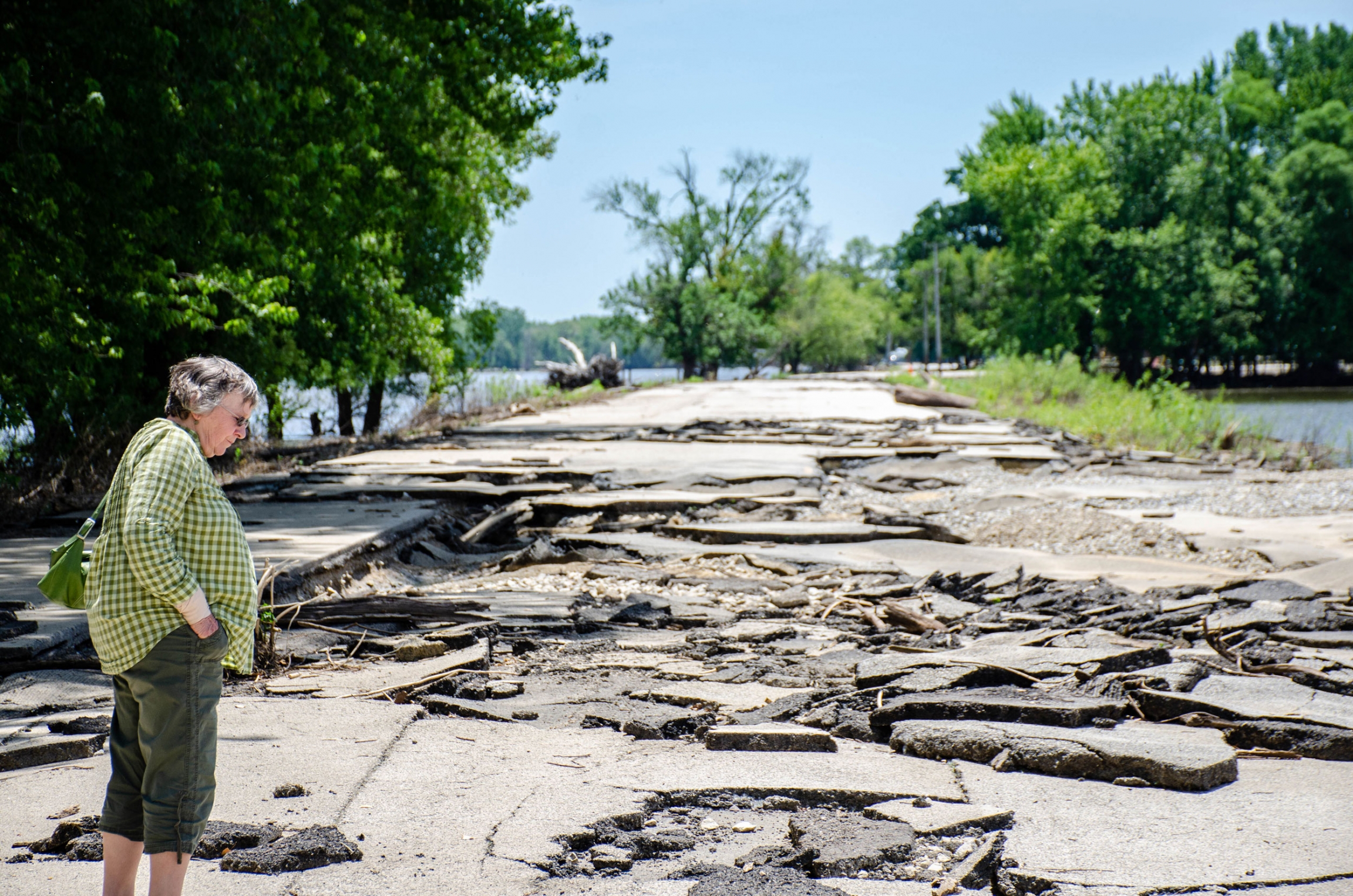 City Council member Marion Meginnis of Davenport, Iowa, looks over the damage caused by floods this year south of downtown. Riverfront parks and nature preserves were designed to take in excess water during stages of high water, but damage can still be severe, as seen at the entrance to Credit Island. A few miles north of here, a temporary wall was erected to protect downtown Davenport, but the wall breached and a few blocks of the city were quickly besieged by 4 feet to 6 feet of water. “This is water filled with all kinds of unspeakable things because it's coming out of sewers; it’s coming out of everywhere. It’s got everything in it — waste, everything — so, it’s not something you want to go frolicking through at all,” Meginnis said.

Related: Updating the $50 billion plan to defend and restore the Gulf Coast 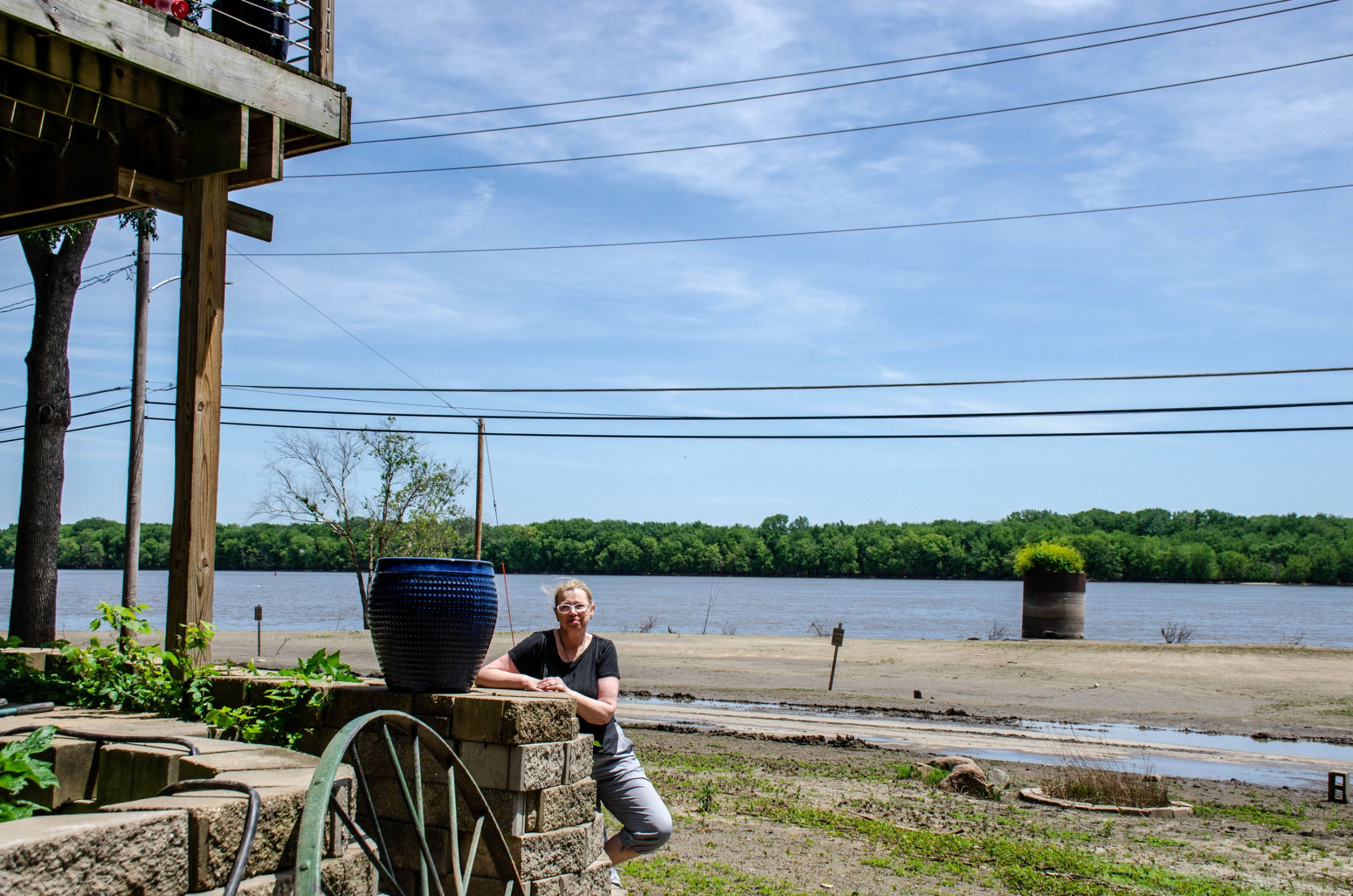 Shonnie Holmes stands next to her house located near the Mississippi River in Davenport, Iowa. Holmes has lived along the Mississippi, off and on, all of her life. To protect her home, she lifted it up more than 20 feet, exceeding recommendations from the Federal Emergency Management Agency. It worked during this year’s spring flooding. “You can’t win with the river. It’s going to do what it’s going to do. You just live with it, and you conform to what it needs,” Holmes said. 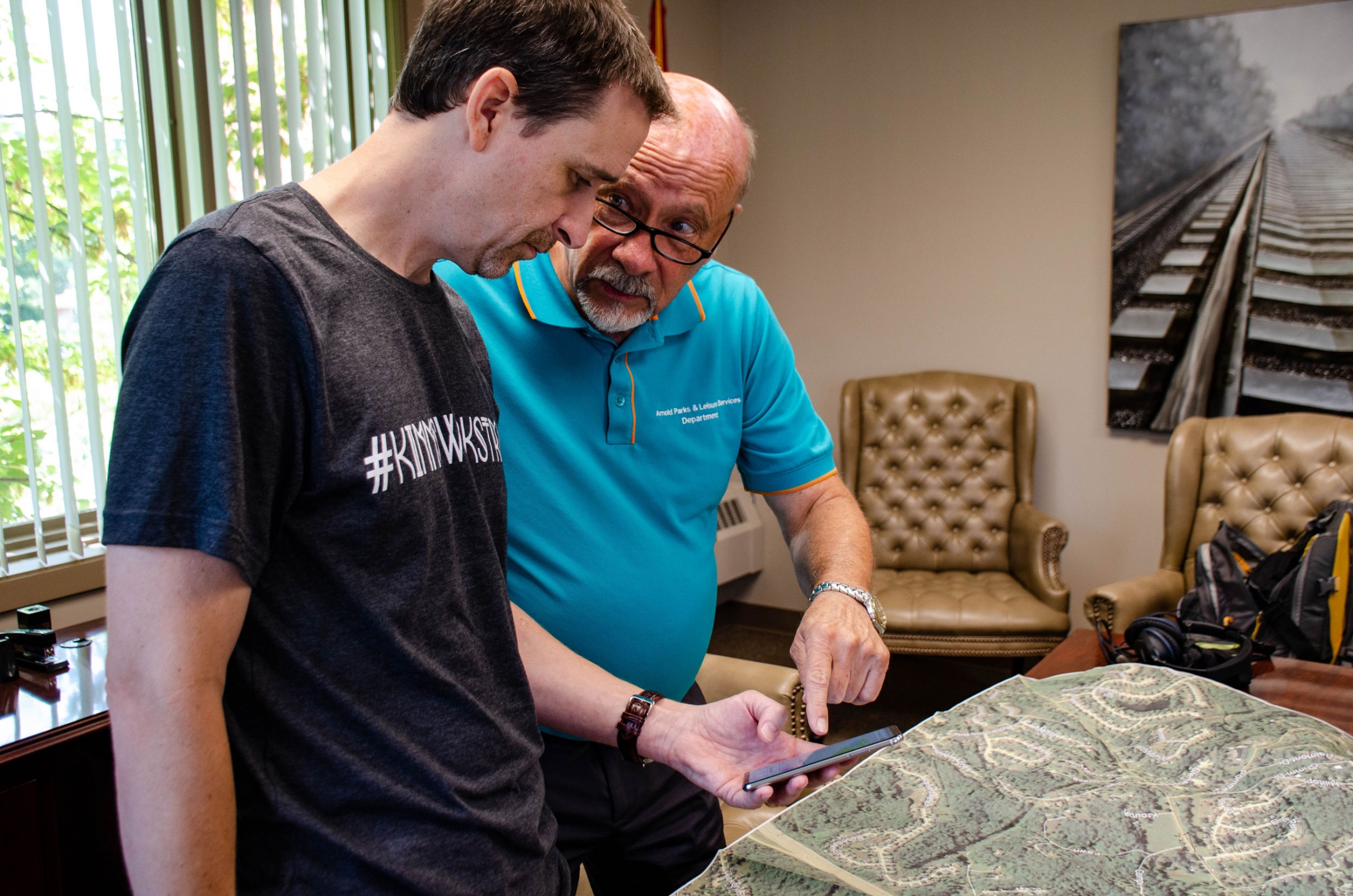 Colin Wellenkamp, left, executive director of the Mississippi River Cities and Towns Initiative, speaks with Ron Counts, mayor of Arnold, Missouri. The city has bought and removed many homes near the Meramec River, a tributary of the Mississippi, to create more green space and room to take in floodwaters when the river system rises too high. Up and down the Mississippi, countless acres of urban pavement have replaced spongy soil. More policymakers are turning toward natural solutions, such as riverfront wetlands restoration, as opposed to building more levees and walls.

Related: Rising seas are washing away two US towns. How they're responding is a matter of faith, belief and money. 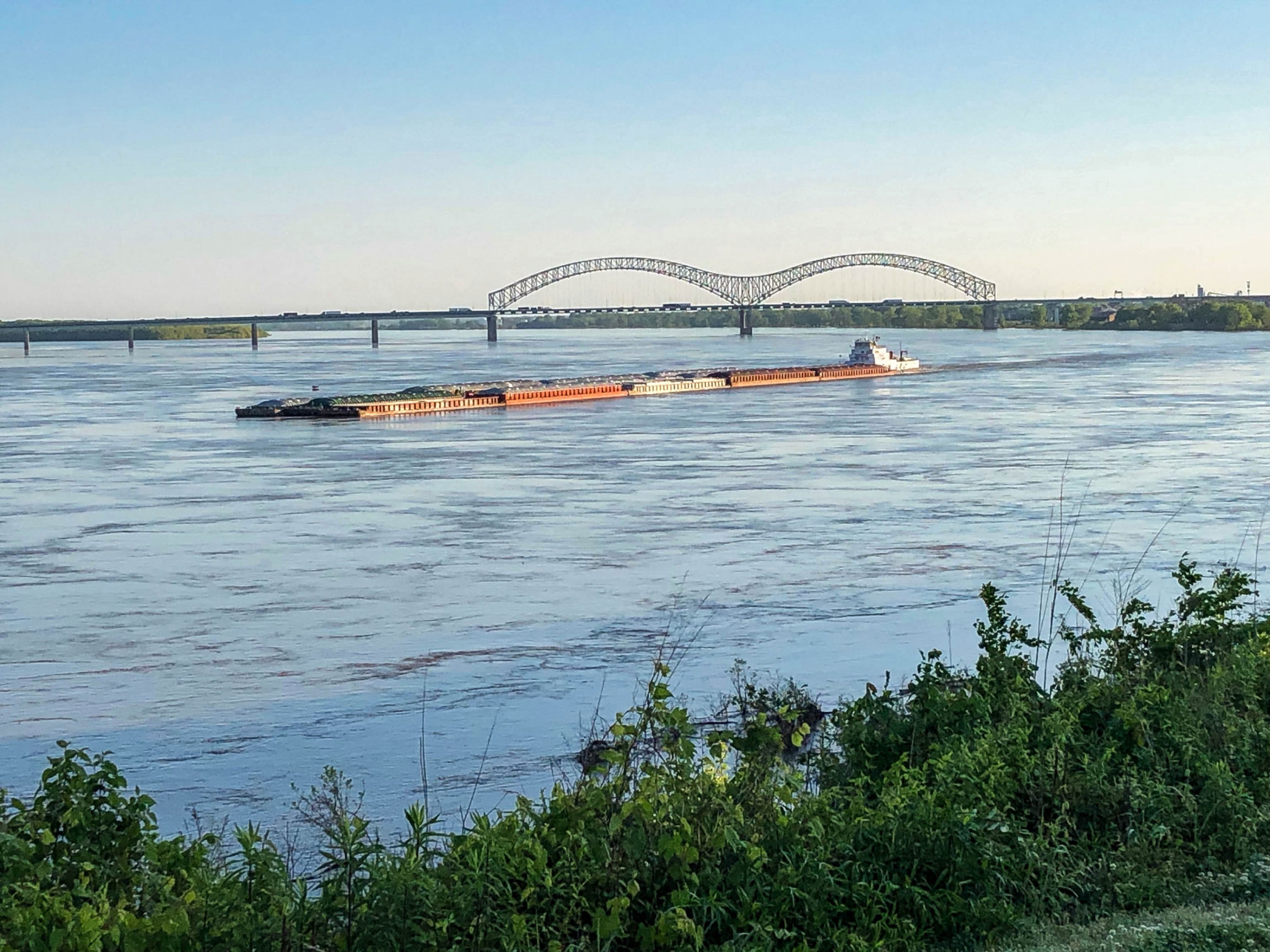 A barge carries goods down the Mississippi near Memphis, Tennessee. River transport is the most efficient way to get corn, soybeans and wheat from the Midwest to the Port of New Orleans, where it's shipped across the globe. One river tugboat pulling barges can transport the same amount of cargo as 2,500 trucks. Illinois farmers like Greg Guenther depend on that fact. “My customers for my corn are all overseas. They're all overseas, every one of them. And we're in a highly competitive situation now with South America, Brazil and Argentina. China does a little exporting of corn and all these other countries are competing for the same customers that we're competing for. And if our transportation efficiency falls to where we're not the lowest-cost supplier, we don't get the business,” he said.

“My customers for my corn are all overseas. They're all overseas, every one of them. And we're in a highly competitive situation now with South America, Brazil, Argentina, China does a little exporting of corn and all these other countries are competing for the same customers that we're competing for. And if our transportation efficiency falls to where we're not the lowest-cost supplier, we don't get the business.” 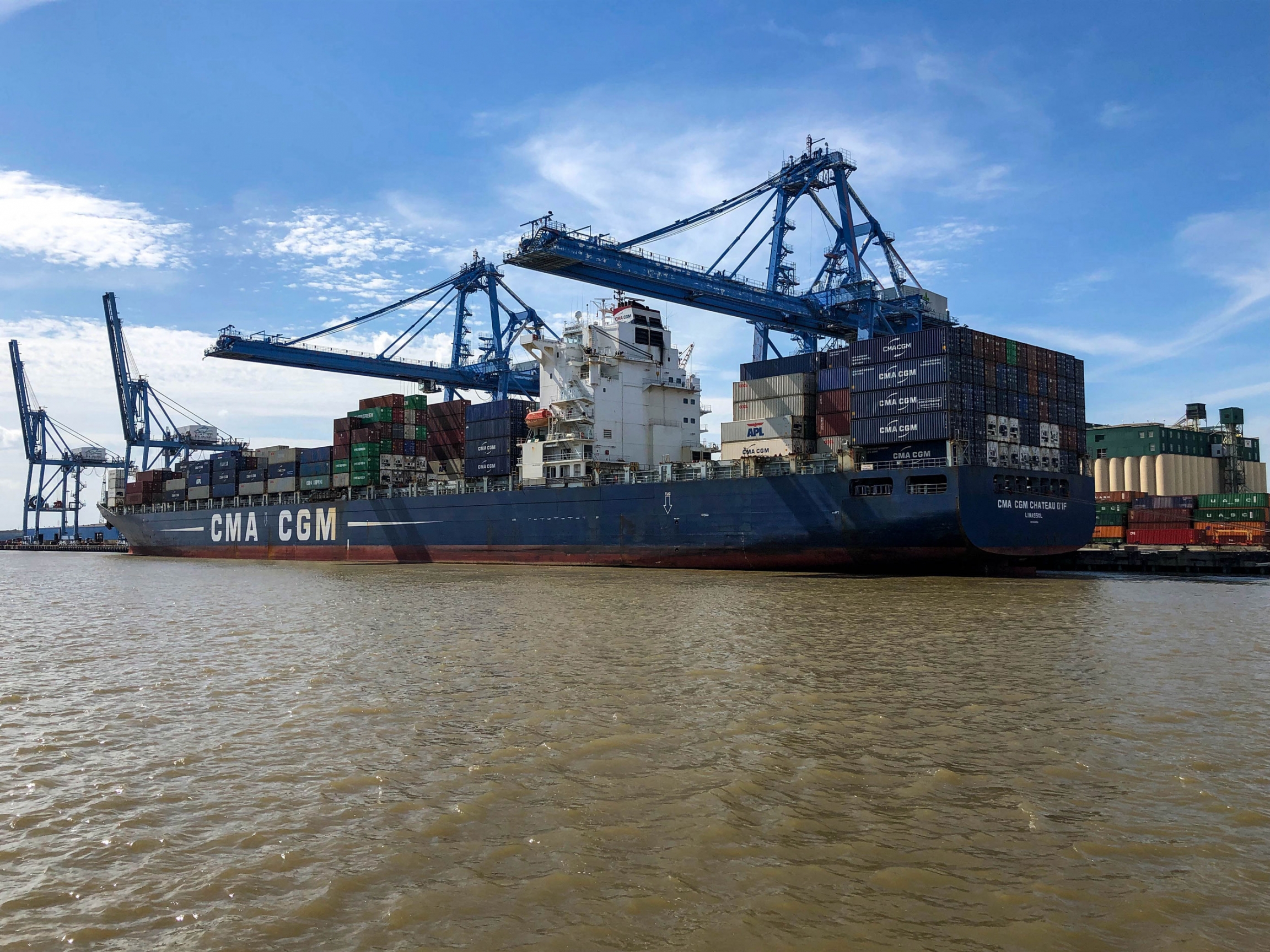 The Port of New Orleans is connected by nearly 15,000 inland waterways. The port says that commerce through here supports 120,000 jobs nationwide. Sean Duffy with the Big River Coalition, a group that seeks to protect commerce along the Mississippi, says when people in the maritime industry see a photo of a flooded river city, “We think, holy crap. I mean that's truthfully what we see. It's scary. Because [of] the height of the river and the current.”

“We think, holy crap. I mean that's truthfully what we see. It's scary. Because [of] the height of the river and the current.” 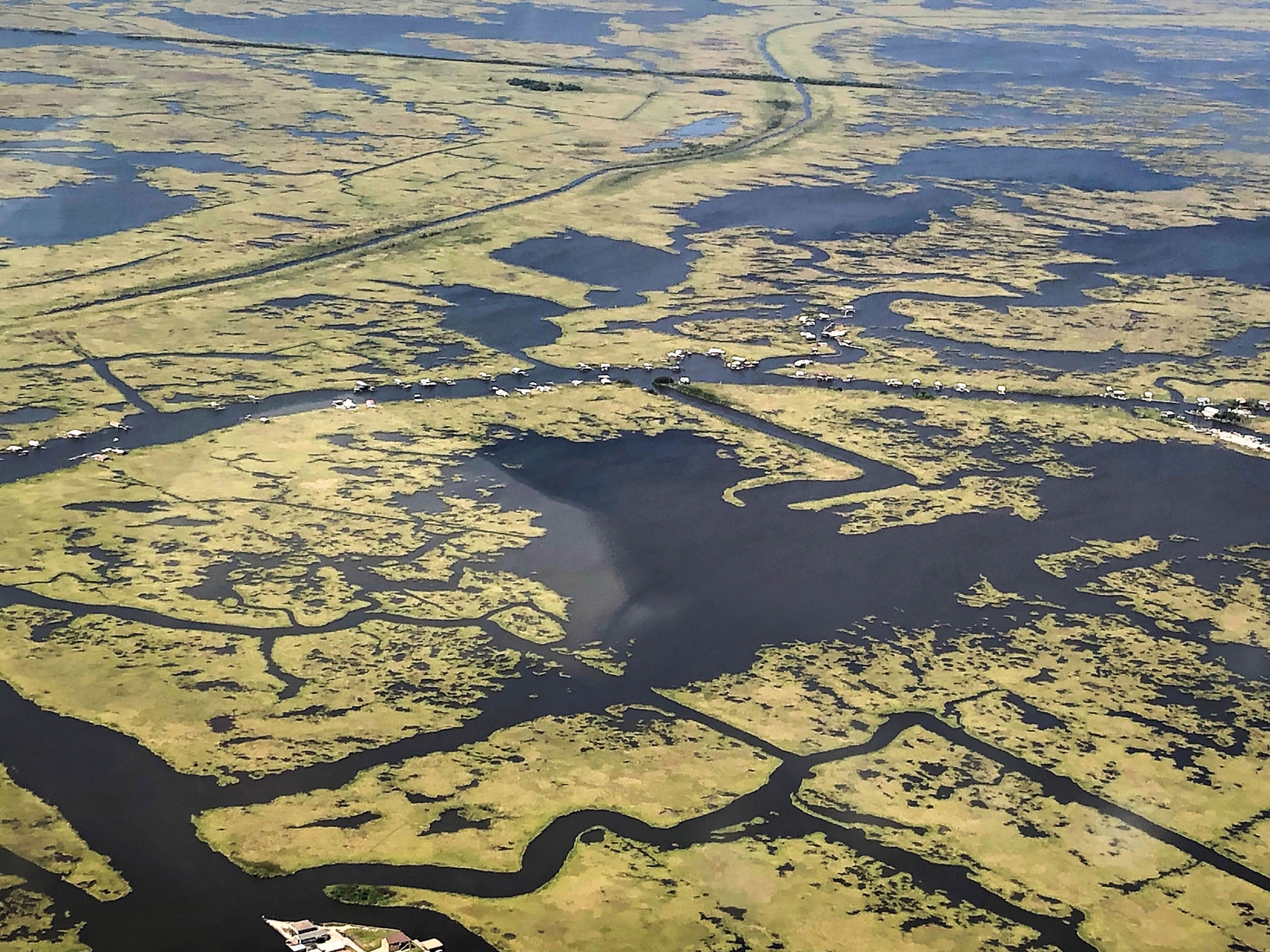 Communities and houses cling to vanishing land in the Mississippi River Delta south of New Orleans. Since the 1930s, the land here has decreased by an area roughly the size of Delaware. 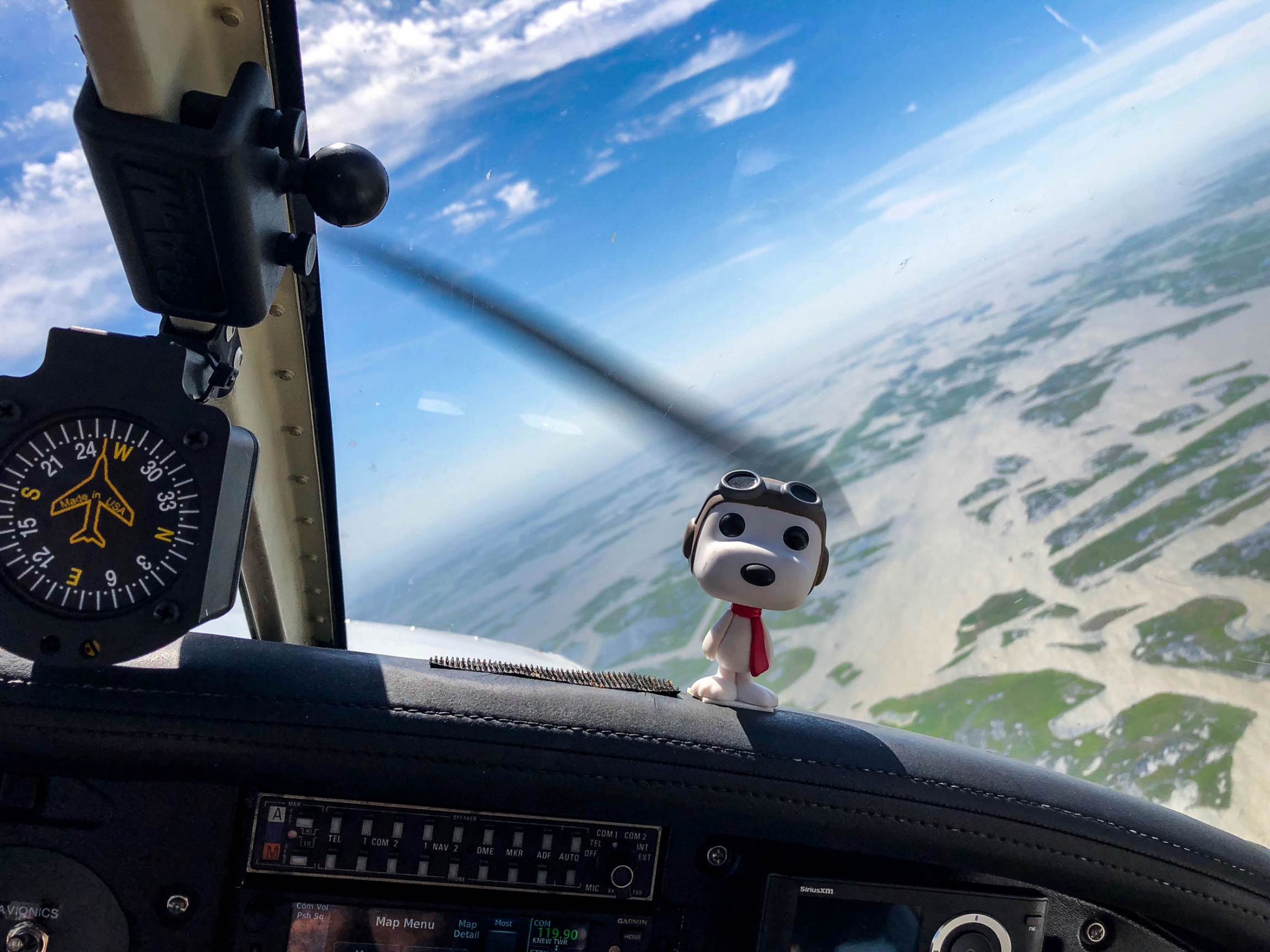 Pilot Owen Bordelon keeps a Snoopy figurine on the dashboard of his four-seat plane. He gives tours of the vanishing coast with SouthWings, a volunteer pilot organization that provides flights for Restore the Mississippi River Delta, a coalition of environmental organizations. Looking below, the area south of New Orleans looks like Swiss cheese that’s been cut with scissors. Much of the land has eroded, but the oil and gas industry has complicated matters by constructing thousands of miles of canals to reach drilling rigs. 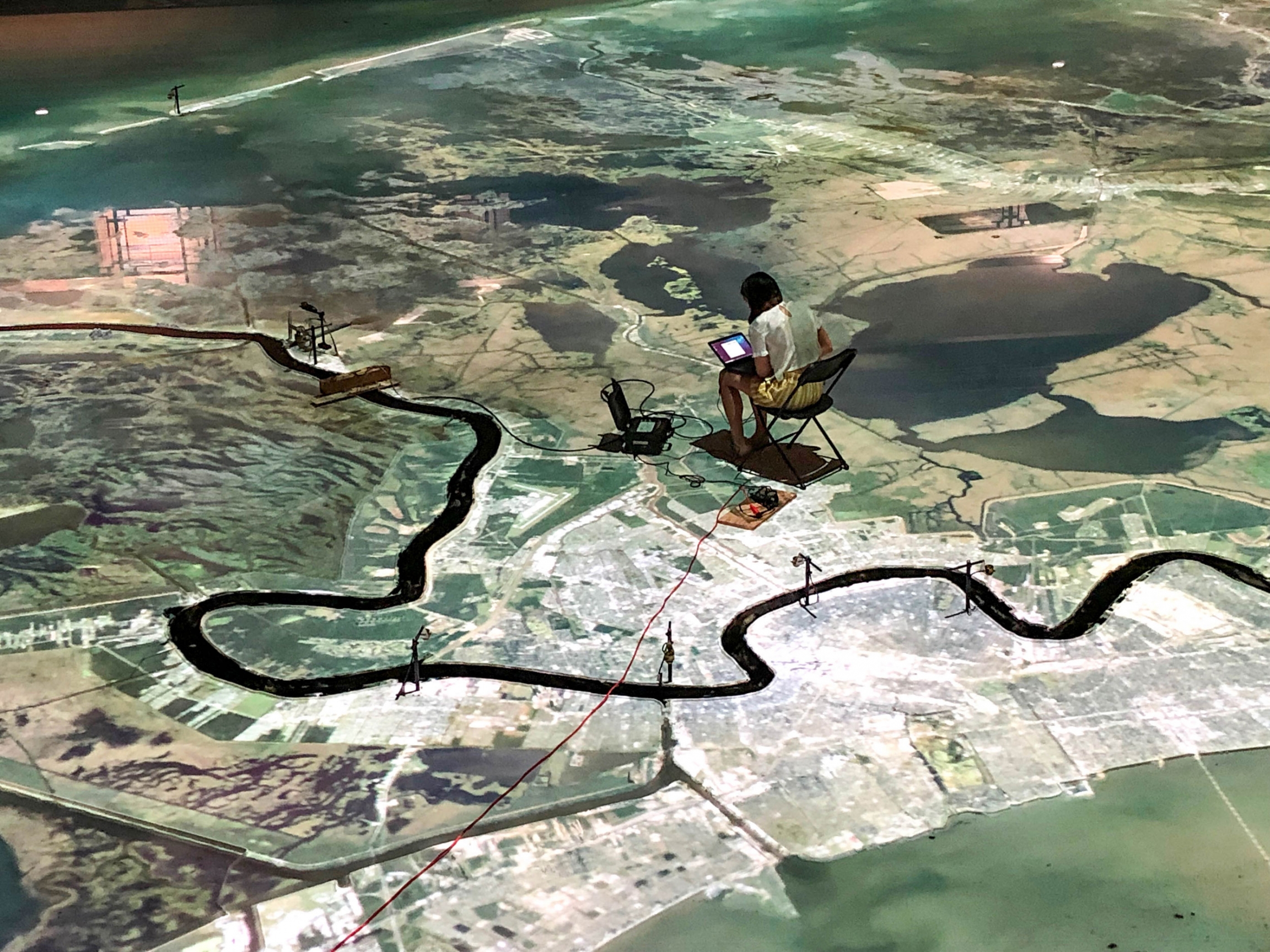 At Louisiana State University in Baton Rouge, researchers study the impacts of engineered and natural changes to the lower Mississippi River and coastal Louisiana. The massive indoor model, roughly the size of two basketball courts, was constructed from more than 200 high-density foam panels stitched together. Water and plastic pellets, used to mimic dirt and sand, are pumped through the model river around a bend in New Orleans, pictured above. Engineers, geologists and river experts at the school can also run scenarios accounting for various levels of sea level rise driven by climate change, where one year of the Mississippi River is simulated in one hour. 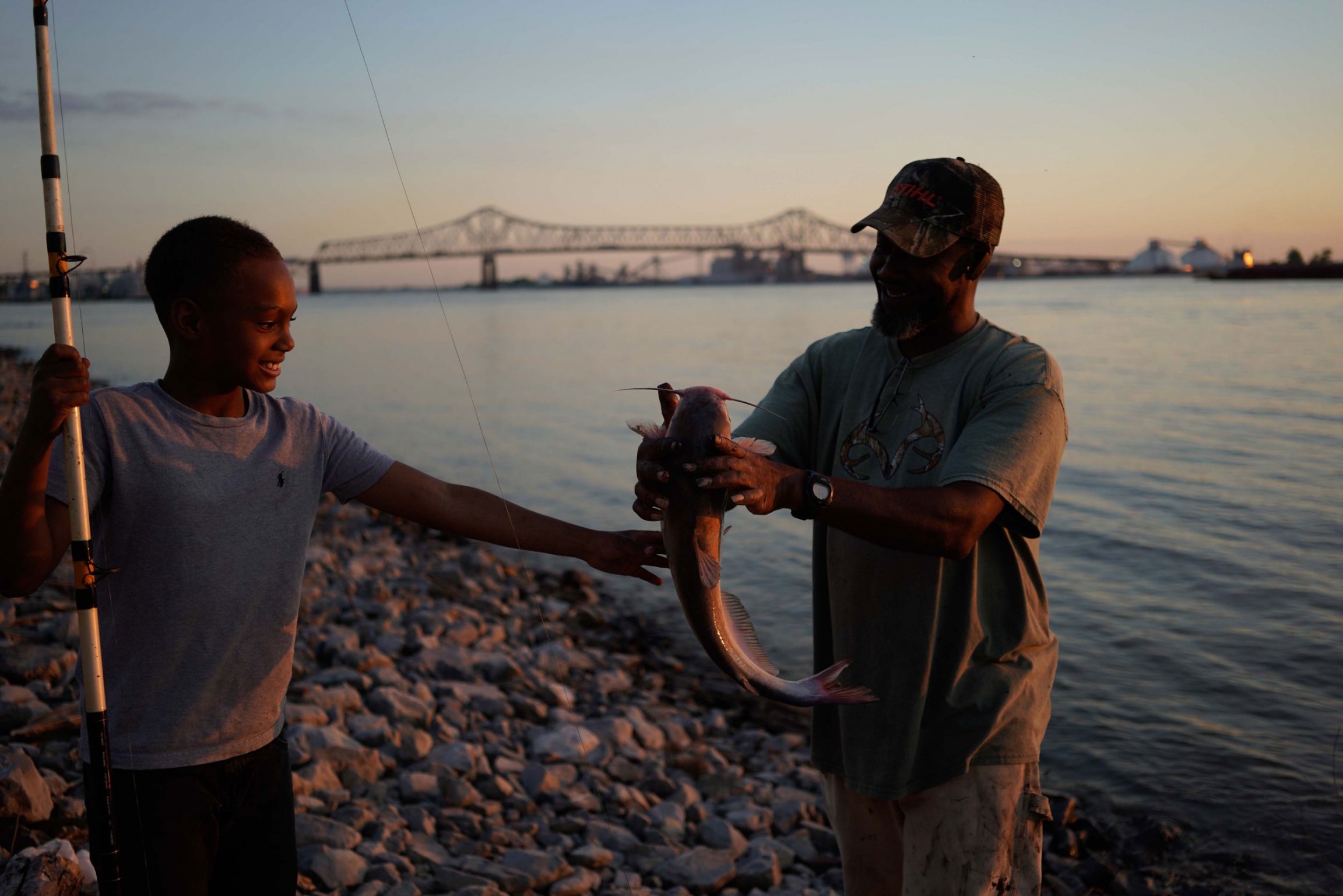 A fish is pulled from the Mississippi River near Baton Rouge, Louisiana. Further south, oysters thrive in brackish water, a mix of freshwater and saltwater, in coastal Louisiana. If engineers release more freshwater, along with dirt and mud, into coastal Louisiana — to try and restore more wetlands — it could upset the delicate water balance and put some 4,000 jobs and $300 million at risk. Same goes for shrimpers. Louisiana is the nation’s top supplier of domestic shrimp. 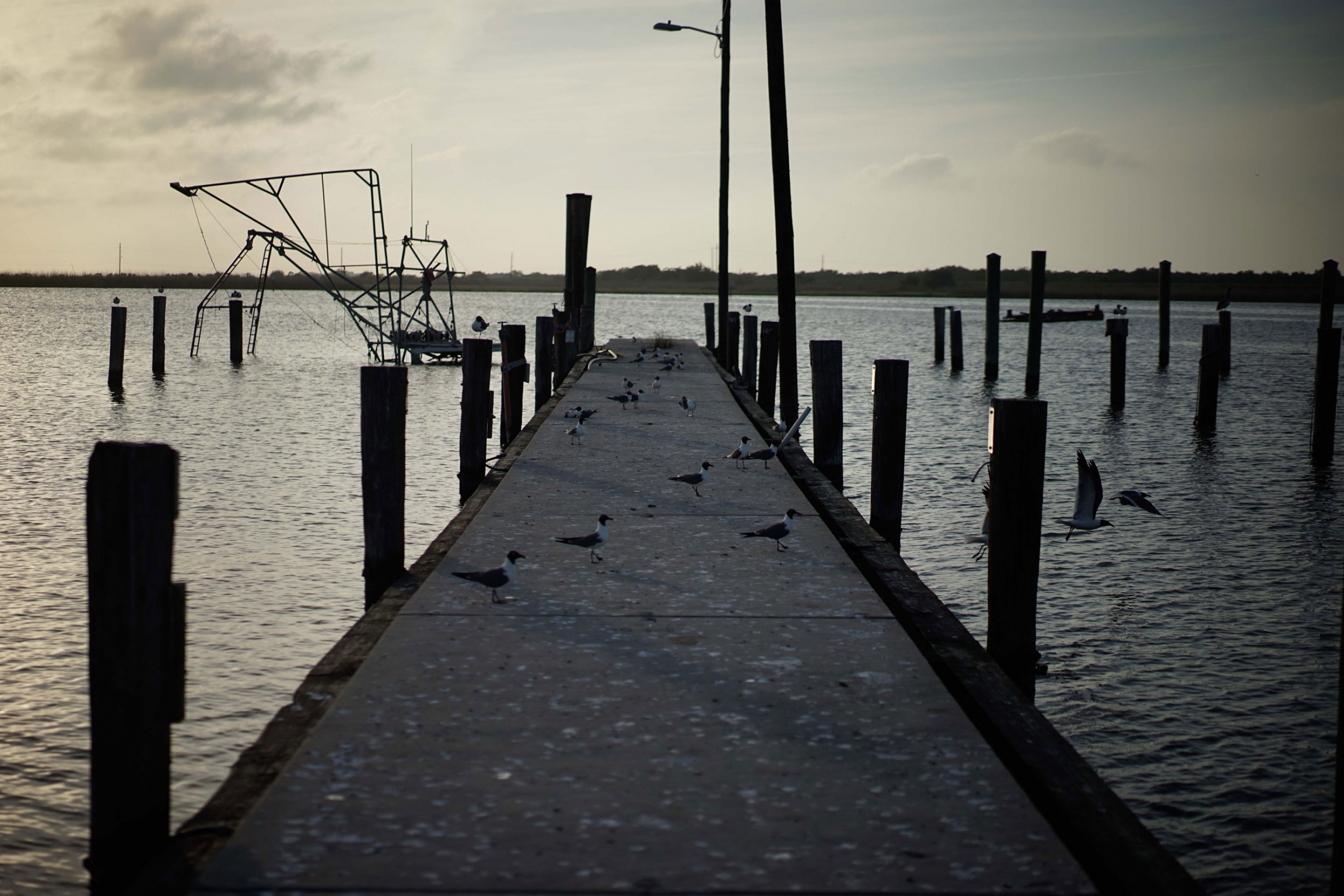 A dock extends out into the Mississippi River in Buras, Louisiana. Engineers, environmentalists, shippers, farmers and the oil and gas industry are all trying to find better solutions to confront new challenges facing the river. Some groups and activists who've historically been adversaries are now working together. “We want to live here, so how we do that? We’ve got to compromise. That’s it. If we don’t compromise, none of us will be here,” said Louisiana duck hunter Albertine Kimble.

““We want to live here, so how we do that? We’ve got to compromise. That’s it. If we don’t compromise, none of us will be here.”