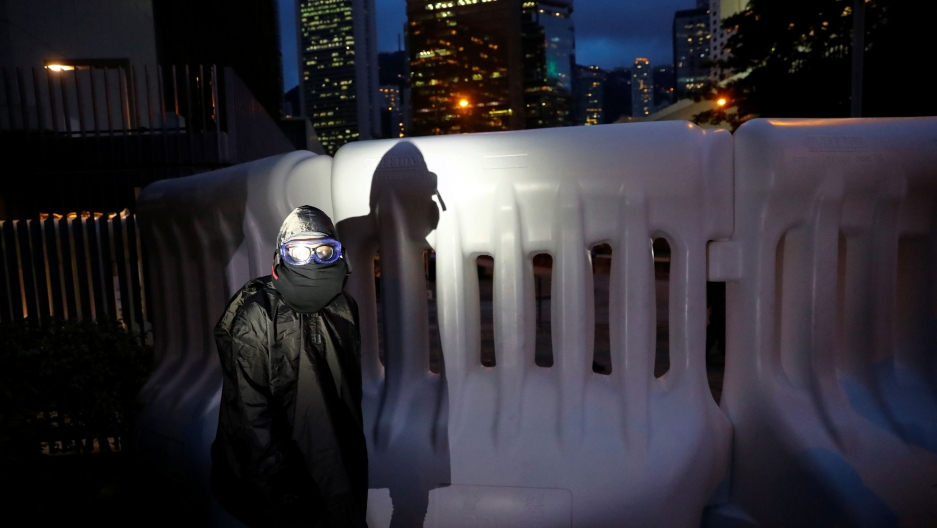 A protester casts his shadow at a police barricade outside the government headquarters during a general strike in Hong Kong, on Sept. 3, 2019.

Embattled Hong Kong leader Carrie Lam said she has caused "unforgivable havoc" by igniting the political crisis engulfing the city and would quit if she had a choice, according to an audio recording of remarks she made last week to a group of businesspeople.

Related: For Hong Kong dissidents challenging China, 'it feels like '1984'

At the closed-door meeting, Lam told the group that she now has "very limited" room to resolve the crisis because the unrest has become a national security and sovereignty issue for China amid rising tensions with the United States.

"If I have a choice," she said, speaking in English, "the first thing is to quit, having made a deep apology."

Lam's dramatic and at times anguished remarks offer the clearest view yet into the thinking of the Chinese leadership as it navigates the unrest in Hong Kong, the biggest political crisis to grip the country since the Tiananmen Square protests of 1989.

Hong Kong has been convulsed by sometimes violent protests and mass demonstrations since June, in response to a proposed law by Lam's administration that would allow people suspected of crimes on the mainland to be extradited to face trial in Chinese courts.

The law has been shelved, but Lam has been unable to end the upheaval. Protesters have expanded their demands to include complete withdrawal of the proposal, a concession her administration has so far refused. Large demonstrations wracked the city again over the weekend.

“[T]hey just ignore all the requests from the protesters. We cannot understand. And very likely it’s from Beijing. Beijing is taking over directly the control of Hong Kong.”

A Hong Kong resident supportive of the airport protests, Hen, who asked that his last name not be used for fear of professional repercussions, told The World the government is not responding positively to their demands. “[T]hey just ignore all the requests from the protesters. We cannot understand. And very likely it’s from Beijing,” he said. “Beijing is taking over directly the control of Hong Kong.”

Another protester, who asked that his name not be used, said freedom of expression in Hong Kong has been severely stifled.

"What makes me scared is that people in Hong Kong cannot express what we want to say freely anymore. It’s really like what the Chinese government were doing in the Cultural Revolution. And Hong Kong should not be a place like that."

"What makes me scared is that people in Hong Kong cannot express what we want to say freely anymore. It’s really like what the Chinese government were doing in the Cultural Revolution. And Hong Kong should not be a place like that."

Related: How to apologize for the Cultural Revolution without blaming the Communist Party

Lam suggested that Beijing had not yet reached a turning point. She said Beijing had not imposed any deadline for ending the crisis ahead of National Day celebrations scheduled for Oct. 1. And she said China had "absolutely no plan" to deploy People's Liberation Army troops on Hong Kong streets. World leaders have been closely watching whether China will send in the military to quell the protests, as it did a generation ago in the bloody Tiananmen crackdown in Beijing.

Lam noted, however, that she had few options once an issue had been elevated "to a national level," a reference to the leadership in Beijing, "to a sort of sovereignty and security level, let alone in the midst of this sort of unprecedented tension between the two big economies in the world."

In such a situation, she added, "the room, the political room for the chief executive who, unfortunately, has to serve two masters by constitution, that is the central people's government and the people of Hong Kong, that political room for maneuvering is very, very, very limited."

Three people who attended the meeting confirmed that Lam had made the comments in a talk that lasted about half an hour. A 24-minute recording of her remarks was obtained by Reuters. The meeting was one of a number of "closed-door sessions" that Lam said she has been doing "with people from all walks of life" in Hong Kong.

Responding to Reuters, a spokesman for Lam said she attended two events last week that included businesspeople, and that both were effectively private. "We are therefore not in a position to comment on what the Chief Executive has said at those events," the spokesman said.

China's Hong Kong and Macau Affairs Office, a high-level agency under China's cabinet, the State Council, did not respond to questions submitted by Reuters.

China's State Council Information Office did not immediately respond to questions from Reuters.