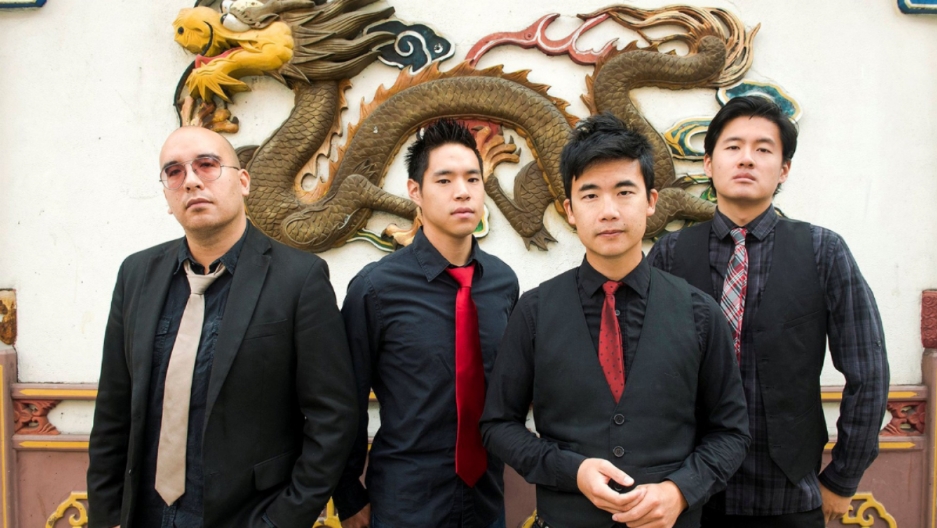 Courtesy of The Slants

When Simon Tam decided to name his dance-rock band "The Slants," he did not know that this decision would land him in a legal battle, and eventually in the US Supreme Court.

The band has said it wanted to reclaim what is often seen as a slur against Asian Americans. But the US Patent and Trademark Office refused the registration of "The Slants" in 2011 and rejected the band’s appeal, citing the Lanham Act, which prohibits trademarks that could "disparage ... or bring ... into contemp[t] or disrepute" any "persons, living or dead."

After a federal court sided with Tam and "The Slants," the Patent and Trademark Office sued. The case was taken to the US Supreme Court which, in 2017, ruled unanimously in favor of the band on First Amendment grounds. Tan released a memoir this year titled "Slanted: How an Asian-American troublemaker took on the Supreme Court."

Simon Tam, a child of Asian immigrants to the US and The Slant's bassist, grew up in San Diego, California in the early '80s. Since age eight, Tam says he helped serve customers at his family’s restaurant. “I think it gave me a lot of lessons about hard work, seeing my parents work so hard from morning to night every single day, gave me a view of entrepreneurship and drive,” Tam told the World’s Carol Hills. “But ultimately, I also saw how hard it was to operate in society as Asian-Americans.”

Carol Hills: Simon, how did you come up with the name of the band The Slants?

Simon Tam: I actually had the idea for an Asian-American band well before I had the name of the band. But as I started asking the people around me, all my non-Asian friends in Portland, I said, 'What's something you think all Asian people have in common?' They would always come back to me and say 'slanted eyes,' which I thought was interesting because, first of all, it's not true, not all Asian people have slanted eyes and we're not the only people on the planet with slanted eyes. But I also reflected back on my childhood experiences, because it was these eyes, it was these facial features, that got me bullied time and time again. I always associated my slanted eyes with a sense of shame and because Asians [are among the most bullied demographic in America]. I knew that I couldn't possibly be alone in this. I thought what if we changed it, what if we talked about our slant on life of what it's like to be people of color and inject a sense of self-empowerment and pride into the term instead.

When you suggested that name, what did your bandmates think? Did they instantly like it?

People loved it. I actually had the band name before I had any band members. So as people were auditioning and I was telling them about the idea, they actually thought it was entertaining. Several of the initial band members also had similar childhood experiences to mine so they just thought, 'this is kind of a punk-rock in-your-face way of throwing it back at people who use racism against us.'

Did you get any pushback from anybody about it in those early years?

Not anyone from the Asian-American community, no. I think it's also important to understand that Asian-Americans had been using the term for about 30 years. We had everything from the Slant Film Festival, which was the second biggest Asian-American Film Festival during its time period, The Slanted Kings of Comedy tour, Slant Magazine, Slant TV, it was a widely adopted term and people wanted to use it in this empowering kind of way.

Simon, prior to the Supreme Court what reason did the various other courts give for not allowing you to trademark your band's name?

For many years, the trademark system argued that my name was disparaging to persons of Asian descent and therefore that it could not be registered because there was an old bit of law from the 1930s called Section 2 of the Lanham Act. That law said you can't register trademarks that are considered scandalous immoral or disparaging. But it has to be considered disparaging by what they call a substantial composite of the reference group. So in this case, a whole lot of Asian people had to be upset by our name for the government to deny us this registration. The problem was, they didn't find a single Asian person who was actually disparaged, so they ended up relying on things like UrbanDictionary.com and using websites like AsianJokes.com to justify their decision.

The Supreme Court ultimately ruled in your favor you could keep the band's name The Slants. What was their reasoning?

They declared the law unconstitutional. They said it was unconstitutionally vague and under the First Amendment, the government doesn't have the right or the ability to decide which kinds of speech are good and which kinds of speech are bad. Because trademarks are private speech, you as a business owner or artists choose to use the words however you wish and they become your property, not the government's property.

What was it like for you and the band to be there before the justices?

I will say it was probably one of the most surreal experiences of my life. But I will say that even though they're referring to me and my band, I never felt so invisible because the government was arguing — they were talking about a racist band, a band that was doing horrendous things to its own community. And all the while as I'm sitting there I'm thinking, 'That's not me, you don't know me, you don't know my work, you don't know the fact that we actually work with over 140 different social justice organizations across this country and that whenever the government needed outreach to the Asian-American community, whether it was the Department of Defense or the White House under President [Barack] Obama, they called us they asked us to do that outreach for them.' So it just seemed absurd that I was there in the nation's highest court, being called a racist, in a sense.

Simon, if you had to, would you do it all over again?

I think if someone told me that it would take up almost a decade of my life and countless resources, that I would be on the brink of bankruptcy, if you told me that at the age I applied, where I was and who I was, I don't think I would have done it. But in hindsight, I realize how important it was to move this conversation forward. Now, I have an office wall full of letters from gay and trans attorneys who've felt the sting of the government, the indignity of the process that they were put through when they wanted to re-appropriate words. Now, I have all these letters of people saying 'Thank you, thank you for doing this because I wanted to have my own voice, I wanted the ability to decide what was right for me and for my community and not to have someone working in a government office, who has no connection to these experiences, making that decision for me.'

So, when I look back and look at all of this, I, of course, would do it again. I wouldn't wish it upon anybody because it's a very long, tiring process, it'll drain you and it'll kind of define who you are for the rest of your life. But still, I'm glad I did it.