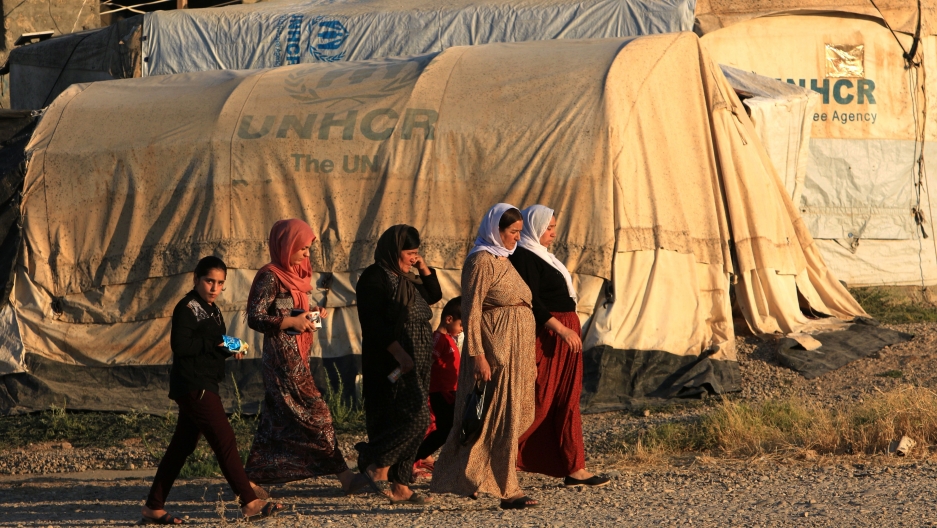 Displaced Iraqi women from the minority Yazidi sect, who fled the Iraqi town of Sinjar, walk at the Khanki camp on the outskirts of Dohuk province, July 31, 2019.

Dalal Khairo was kidnapped by ISIS, then raped and abused by nine successive militants after the group swept across Iraq in 2014. The 22-year-old lives in Germany now, and says there is not much of a Yazidi homeland to return to.

“The Yazidis are better off moving to other countries because Iraq is not safe; Sinjar is not safe. Even if they rebuilt the area, it is now controlled by various militia groups and is too dangerous to go back to.”

“The Yazidis are better off moving to other countries because Iraq is not safe; Sinjar is not safe,” Khairo said, referring to the Yazidi heartland in northern Iraq. “Even if they rebuilt the area, it is now controlled by various militia groups and is too dangerous to go back to.”

This month, Khairo and other Yazidis marked five years since ISIS overran northwestern Iraq, murdering an estimated 5,000 Yazidi men and boys who refused to convert to Islam, and enslaving some 7,000 women and girls, including some as young as 9.

The anniversaries of the killings of Yazidis and Rohingya Muslims will likely be on the minds of world leaders as they meet in New York in September to discuss security threats at the annual UN General Assembly.

ISIS was pushed out of Iraq in 2017, but the religious hard-liners cast a long shadow across the Yazidi religious minority, who ISIS branded “infidels” and subjected to sex slavery, murder and other horrors.

The brutality against Yazidis was an extreme example of religious persecution — one that triggered an international military intervention that left ISIS decimated. But from China’s gulags for Muslims to a synagogue massacre in the United States, minority faith groups face more frequent attacks nowadays and solutions are in short supply.

Like other abductees, Khairo, then 17, says she was sold, gifted and shared among ISIS fighters, forced to memorize Quranic verses and beaten and humiliated, including by the resentful wives of militiamen.

Eventually, Khairo managed to escape. Her mother and sister, also kidnapped, are missing, while her brothers were killed or forced to become child ISIS fighters. She now lives in Baden-Württemberg, Germany, thanks to a local government initiative for ISIS survivors. 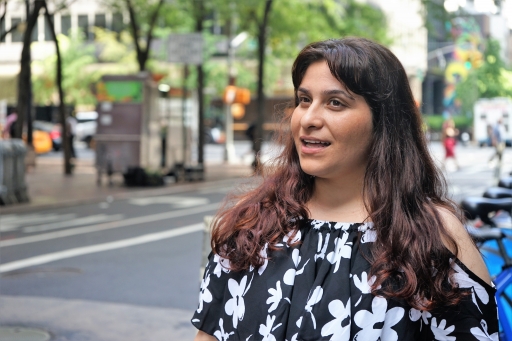 Dalal Khairo was kidnapped by ISIS as the group swept across Iraq in 2014, then raped and abused by nine successive militants in as many months. The 22-year-old lives in Germany now and says there is not much of a Yazidi homeland to return to.

Only a quarter of Sinjar’s original Yazidi population has returned home. Some 300,000 others live in camps up north in Kurdistan, where they continue to practice a faith that draws from Islam, Christianity, Zoroastrianism and elsewhere.

ISIS abuses against Yazidis are among the most clear-cut examples of faith-based persecution and violence in recent times, but they are by no means an exception, says Sam Brownback, the US envoy for religious freedom.

This month, the mostly-Muslim Rohingya minority marked two years since the start of an exodus from genocidelike violence in Myanmar. In China, as many as 1 million members of the Uighur Muslims languish in government-run “reeducation camps.”

In October, a massacre at a synagogue in Pittsburgh, Pennsylvania, left 11 Jewish worshippers dead. In March, another lone gunman killed 51 Muslims at Friday prayers at two mosques in Christchurch, New Zealand.

“The state of religious freedom around the world is bad and it's getting worse."

According to Brownback, 83% of the world’s 7.7 billion people live in countries where religious freedom is threatened or denied. One-third of them faces religious persecution, according to Poland’s Foreign Minister Jacek Czaputowicz.

.@SecPompeo at the #IRFministerial: Today we are turning our convictions into action. And there’s not a moment to lose. A shocking 83 percent of the world’s population live in nations where #religiousfreedom is either threatened or denied entirely. pic.twitter.com/yn3WXrtFZa

Eleven people are killed daily as a result of religious persecution, Czaputowicz says.

“We’re working with like-minded countries to push on the topic of religious freedom globally so that we can start getting the trend line going the other way, so that the iron curtain of religious persecution comes down,” Brownback said.

While the problem of violence against faith groups is manifest, tackling it is a head-scratcher.

It is difficult to hatch a wholesale approach to address everything from the Christian, anti-Balaka militia’s hits on Muslims in central Africa to Nigeria’s Boko Haram Islamists, who have killed thousands in a decadelong insurgency against the government.

It is even harder to draw a line between Brenton Tarrant, the Australian man accused of gunning down Muslim worshippers in New Zealand, and the Chinese officials who decided to inter masses of Muslims behind razor-wire fences in Xinjiang.

For Clive Baldwin, a legal adviser at Human Rights Watch, a campaign group, the lines are often blurry.

Baldwin points to Syria’s civil war, which has at times pitted Sunni Muslims and minority Alawites, Christians and others against one another — but the conflict cannot be understood in purely religious terms, he says.

“It can be difficult to distinguish between religious, ethnic and racial discrimination.”

“It can be difficult to distinguish between religious, ethnic and racial discrimination,” Baldwin said.

Michelle Bachelet, the UN’s high commissioner for human rights, calls for better monitoring for “early warning signs” of looming atrocities. Political leaders often spend months or years vilifying a religious minority in speeches and interviews before they execute their plans.

Czaputowicz, who recently hosted Khairo at a UN meeting on minority faiths, also has a formula: Foster a culture of tolerance, promote exchanges between different religious groups and prosecute anyone who promotes violence against minorities.

Khairo agrees. Like many Yazidis, she feels her people have suffered from violence of Holocaust-like proportions, but there is little international support for a Nuremberg-style tribunal where ISIS fighters answer for their crimes.

In Sinjar, war crimes sleuths have only examined a handful of the scores of Yazidi mass graves. Even with counseling, many ISIS survivors battle trauma and depression. Among Yazidi teens and young adults, suicide rates are up.

In Germany, Khairo has access to teachers and therapists. She makes use of them, but spends most of her time searching for clues about missing relatives or campaigning in support of Yazidis and justice for victims of ISIS.

“I travel the world and give 30-minute speeches, and people tell me how strong I am and how much they appreciate me telling my story,” Khairo said, speaking through an interpreter.

“If they're nodding, I think it means they will help. But the help is taking too long and it could come too late — after all the survivors have emigrated.”