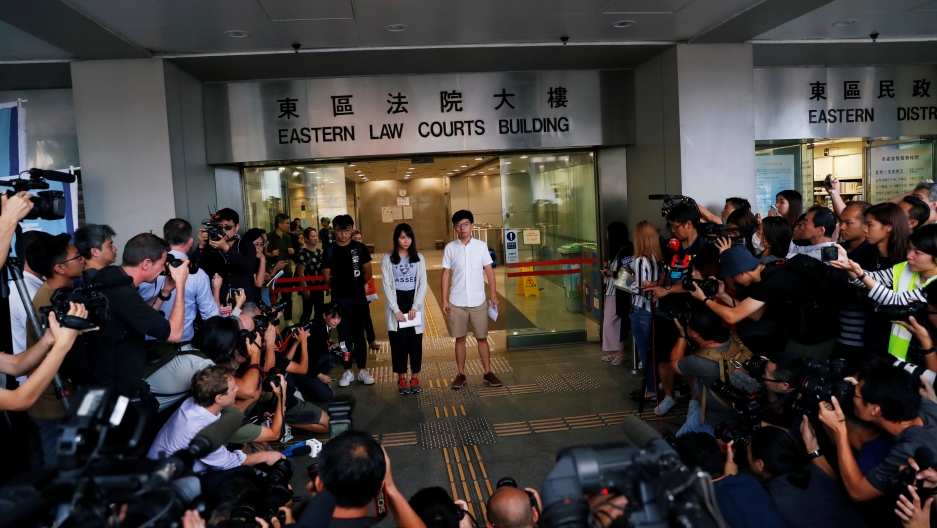 Pro-democracy activists Joshua Wong and Agnes Chow leave the Eastern Court after being released on bail in Hong Kong, China, on August 30, 2019.

Saturday marks five years since the Chinese government decided against fully democratic elections in Hong Kong, sparking the 2014 Umbrella Movement that followed. On the eve of this important anniversary in the pro-democracy movement, authorities in Hong Kong arrested dozens of pro-democracy activists on Friday. Among them were Joshua Wong and Agnes Chow.

Wong was one of the leaders of the pro-democracy Umbrella Movement five years ago; Chow is another senior member of his group, Demosisto.

Wong is the most prominent activist to be arrested since protests escalated in mid-June this year over fears China is exerting greater control over the city and squeezing its freedoms.

The Hong Kong government has denied permission for another large protest Saturday. Wilson Leung is a Hong Kong attorney and founder of the Progressive Lawyers Group. He says he doubts that arresting a few prominent activists is going to do much.

"I think that's quite doubtful because the protests now are quite leaderless in the sense that they don't depend on any prominent figures," Leung said. "They're not led by any well-known organizations. So, if the government's plan is to cut off the heads of these protests, then this is an extremely bad way to do it."

Leung spoke with The World's Carol Hills about the pro-democracy movement in Hong Kong.

Carol Hills: Give us a sense of who Joshua Wong and Agnes Chow are in relation to these protests.

Wilson Leung: Joshua Wong and Agnes Chow — they were two of the prominent leaders in the 2014 protests, the Umbrella Movement. They really came to prominence as leading figures in that protest. Both of them have been active in the pro-democracy camp since. But in the current protests, there actually have not been any leading figures or leading organizations who are at the forefront. You know, a lot of it is leaderless, done in small groups, done on forums and messaging apps. So, you know, there's sort of, you know, inspirational or spiritual kind of figures, you know, they're there and they're definitely well-known, but organizationally, they're definitely not in any sense the leader of the current protests.

Related: How Hong Kong's protests are affecting its economy

What were Joshua Wong and Agnes Chow charged with?

They were charged with inciting and organizing unauthorized protests. This was a protest around two months ago when protesters surrounded the police headquarters. They have to report back to court on Nov. 8. It's likely that it's going to be a procedural hearing only, and the actual trial, if any, will take place probably at least a year from now.

Related: For Hong Kong dissidents challenging China, ‘it feels like 1984’

A lot of these recent protests started over the proposed extradition law that Hong Kong Chief Executive Carrie Lam tried to introduce. And there are now reports that she actually tried to withdraw this extradition bill in the midst of these protests several weeks ago and that Beijing rejected her request. Does that news change anything for the protesters out there?

So, in terms of the protesters' motivation or calculus, I don't think it changes much. What it does do, though, is actually confirm the belief that this extradition bill was a very dangerous proposal in the first place, because Carrie Lam argued that she would act as an effective gatekeeper behind any extradition request coming from Beijing. But the latest news saying that she can't even withdraw a bill without their approval, I think, puts a lot of doubt on that initial denial.

The unrest that has rocked Hong Kong — these protests — they've lasted weeks now. How long can this continue? What's next in your mind?