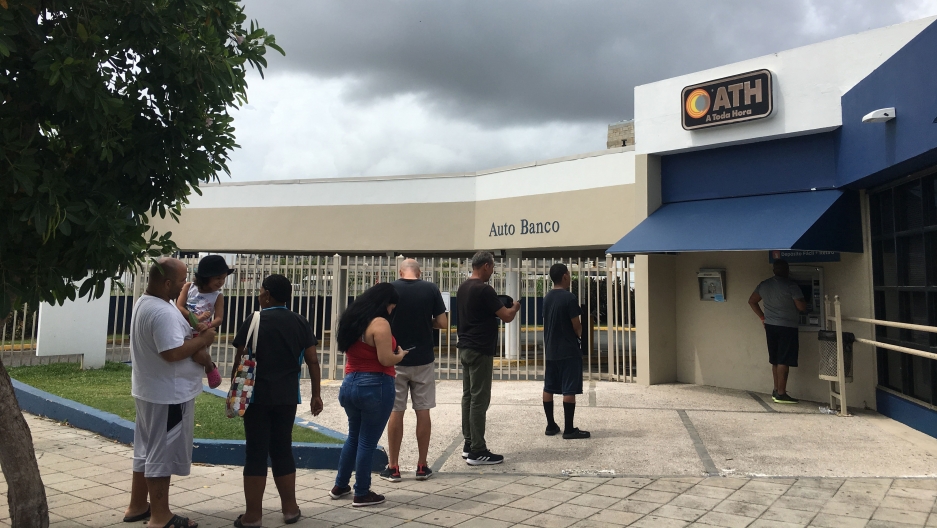 Puerto Ricans wait to get cash out of an ATM in San Juan ahead of Tropical Storm Dorian on Aug. 28, 2019.

Most of Hurricane Dorian passed just northeast of Puerto Rico on Wednesday, drenching Vieques, Culebra and parts of the main island in rain, and kicking up no small amount of wind in the midafternoon.

The islands — still recovering, slowly and haltingly, from the catastrophic impacts of hurricanes Irma and Maria in 2017 — dodged a bullet, but the threat of a direct hit, even by a mere tropical storm, was enough to trigger the entire country into a state of anxious preparation and reflection on the ongoing, contentious reconstruction efforts.

Newly minted Gov. Wanda Vázquez Garced declared a state of emergency on Monday; the University of Puerto Rico closed at noon Tuesday; and public schools closed an hour later. In San Juan, many businesses were shuttered Wednesday morning as residents busied themselves prepping for what might happen next.

“I’m not scared because this will be weaker than Maria. But we are all still traumatized.”

“I’m not scared because this will be weaker than Maria,” said Raymondo Hernández, waiting in line to withdraw cash near the Sagrado Corazón train station at the edge of the predominantly Dominican neighborhood of Barrio Obrero. “But we are all still traumatized.”

Behind him, Lorna Alicia also reflected on Maria. She fears the possibility of more months without light, without communication, being cut off from her family — and also what might happen to people less fortunate than her. Many people are still living in homes covered with blue tarps from the Federal Emergency Management Agency (FEMA), still waiting for help nearly two years after the devasting 2017 hurricane season. (US President Donald Trump’s comments Wednesday notwithstanding, only $14 billion of a promised $42.7 billion in federal aid have reached the island.)

During Maria, she said, her house was OK, but many of her neighbors suffered a lot of damage. “My house became a refugio,” she said. “Many people came to my house to eat and to be safe.”

Maria was bad, but, in a weird way, “It was good for me to be able to help the community.”

But not everyone is nostalgic.

In 2017, Barrio Obrero residents went without electricity or running water for as long as six months. The streets flooded, and property damage was severe. Barrio Obrero is the most densely populated neighborhood in Santurce. But even strong community bonds can’t adequately address the profound infrastructure issues it faces thanks to years of economic disinvestment and neglect. Now, with Puerto Rico reeling not just from the back-to-back hurricanes of 2017, and the slow recovery effort, as well as $124 billion in debt, citizens are understandably on edge.

Related: Puerto Rico has not recovered from hurricane Maria

San Juan Mayor Carmen Yulín Cruz signed the executive order declaring a state of emergency in the city on Monday, activating disaster readiness plans to provide shelter and aid to its community areas. All in all, she said, the city is “much better prepared” for a tropical storm or hurricane than it was two years ago.

But in the city’s poor neighborhoods, where electrical lines still droop and rainwater backs up into the streets after a normal storm, that claim was met with skepticism.

“I don’t trust the government to bring me food or water to protect me.”

“I don’t trust the government to bring me food or water to protect me,” said Anna Astor-Blanco, director and founder of El Cuadrado Gris, a nonprofit arts space in Barrio Obrero. During Maria, she remembers, her husband was traveling and she was alone for weeks without water or power. She ran out of food and lost 15 pounds before joining a volunteer brigade to feed people in the hardest-hit center of the island. Hurricane Dorian’s approach brought it all flooding back.

Astor-Blanco said she had seen no outreach from the state or city to her neighborhood in the days before the storm was predicted to hit. After she stocked up on food and water, made ice and charged all of her electronics, she met up with a neighbor to face the storm together. The political uprising of July, which forced the resignation of Gov. Ricardo Rosselló and many of his top aides and advisers, she said, was a visible manifestation of the one positive effect of Maria.

“Maria opened our eyes to the reality of poverty on the island. I don’t think Rosselló realized that would happen. What he didn’t give us — what he and the government allegedly pocketed — we realized we could give to ourselves. Maria made us strong.”

Meanwhile, down on the beach, the wind was picking up, sending sand flying and waves crashing with more and more force into the shore — the drastic erosion of which was itself declared a state of emergency earlier this month.

Guzmán, born in Brooklyn, moved to Puerto Rico in 2013 and works as a computer programmer from his home in Barrio Obrero. He had walked down to the beach for lunch to take in the storm. In 2001, he says, he was working in the North Tower of the World Trade Center when the first plane hit. He was sanguine.

“I survived the Twin Towers. I survived Maria. You can’t downplay a hurricane, it will do what it wants to do. But this is nothing.”

“I survived the Twin Towers. I survived Maria. You can’t downplay a hurricane; it will do what it wants to do. But this is nothing.”

Still, Astor-Blanco noted Thursday morning, it’s not over yet, if it ever will be. The storm is now bearing down on her family in Florida and, back in Puerto Rico, she’s worried. “When Irma hit we didn’t know Maria was coming two weeks later,” she said. “I’m calm now, but anxious about what happens next.”