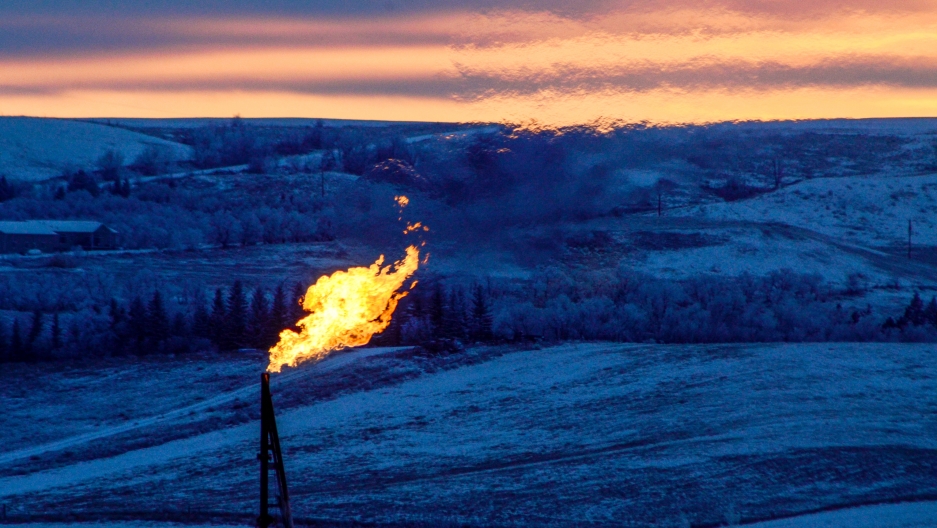 A natural gas flare on an oil well pad burns as the sun sets outside Watford City, North Dakota, on Jan. 21, 2016.

In terms of the damage caused per ton of gas, methane is worse than CO2. It traps more heat in the atmosphere and lingers much longer. That's why the Obama administration put regulations in place to cut down on the amount of methane that gas companies release into the air.

On Thursday, the Environmental Protection Agency (EPA) said in a statement it wants to get rid of those regulations. Climate experts are worried, but so are energy executives.

Methane is the main ingredient in natural gas, which energy companies have touted as a greener alternative to coal.

Scott Silvestri, a spokesperson for Exxon Mobil Corporation, said the company supports "the direct regulation of methane emissions," and urges "the EPA to retain the main features of the existing methane rule."

Energy giant BP agrees. “We have to reduce methane emissions for natural gas to realize its full potential in our energy mix,” said BP America Chairman and President Susan Dio in a statement. “That’s why BP is relentlessly driving down methane emissions in our own operations and collaborating with others to do more. It’s not only the right thing to do for the environment, there is also a clear business case for doing this. Simply, the more gas we keep in our pipes and equipment, the more we can provide to the market — and the faster we can all move toward a lower-carbon future.”

The plan will be up for public comment before being finalized, and will likely face legal action. Matt Watson, an energy specialist with the Environmental Defense Fund, an advocacy group, said it is considering filing suit over the Trump administration's rollback. “If they are successful at what they’re trying to do, then we’ll not only be forgoing an opportunity to slow the rate of global warming, but we’ll be making the situation worse,” he said. "Methane emissions actually occur up and down the oil and gas supply chain, from the drilling process on the front end all the way through transport and delivery to end use."

Watson spoke with The World's Carol Hills about the implications of scaling back methane regulations.

Carol Hills: Tell us what Obama changed about methane emissions and so, therefore, what's being pulled back?

Matt Watson: There were a number of requirements related to, you know, all the different equipment that they have at oil and gas facilities. But one of the centerpieces of that rule was a requirement that oil and gas companies simply go out and look for leaks, and fix them in a timely fashion. So the Trump administration has actually proposed two rules several months back. They proposed a first rule that weakened the provisions of that 2016 rule. And what they've proposed today is to completely eliminate the regulation of methane.

What makes it so appealing to energy producers to be in that business?

Methane is the primary component of natural gas. It's the molecule that burns. You know, some in industry like to say that because it's their product, they have an economic interest in reducing leakage and putting methane in the pipeline. Clearly, that's not true or we wouldn't see the industry emitting roughly 13 million tons of methane through leaks and venting year after year.

But isn't it also true that energy companies kind of tout the environmental benefits of natural gas?

They do, and companies with a long-term view understand that methane emissions are their Achilles heel. The current science indicates that methane leakage from the oil and gas supply chain obliterates most, if not all, of the climate advantage that natural gas can have over coal. So, you have a set of companies out there that understand that this is a problem and that it threatens their long-term economic viability and, in fact, a handful of companies have come out in strong opposition to what the Trump administration is doing, and some of those companies have called on the Trump administration not only to preserve the current rules, but to expand and strengthen them.

It's interesting you mentioned the big energy and gas companies. We reached out to Exxon Mobile and they issued the following comment on the new rule that Trump just issued: "We will continue to urge the EPA to retain the main features of the existing methane rule." Why do Exxon Mobil, BP and others disagree with Trump's change in this?

Companies that are taking a long-term view of their future see that the world is getting serious about climate change and know that methane is a problem they have to get a handle on. They understand that natural gas is not going to have a role to play in the transition to a clean energy economy if they don't fix this methane problem.

Related: EPA chief promised to make life easier for the companies he regulates

So who supports Trump and the EPA in dropping the Obama era regulations?

This proposal is really an attempt by the Trump administration to cater to the very worst performers in the American oil and gas industry. That's who's asking for this.

So, because companies like Exxon Mobil and BP oppose what Trump and the EPA are proposing, will this backfire for the Trump administration?

You know, I won't guess as to what it could mean for the Trump administration politically. What we do know is that if they're successful in pushing these rules through, it, ironically, will be most damaging to the oil and gas industry itself because, you know, it could serve as the final nail in the coffin of a very shaky reputational situation that they and their product are in.

You're seeing this in the US and around the world where local governments and states are moving quickly to try and transition away from natural gas, and unchecked methane emissions just strengthen the case for that exit from gas.

[Gas companies] are pushing it as a clean energy, and therein lies the rub. If methane emissions go unchecked, their claim to be a cleaner burning fuel just evaporates.

Related: The meatless Whopper’s ‘Impossible’ goal: To save the planet

I'm curious, how does the US approach to methane differ from other countries, say Canada, which produces a lot of methane?

Under President Obama, the US was the first country to move on methane. Canada and Mexico quickly joined suit and I think what we're seeing with this proposal, as with so many other issues, is the current administration in the US is just further eroding America's position as a world leader.

Will dropping these Obama era regulations — will it take effect immediately?

It has to go through a regulatory process to be finalized. We also believe that what they're attempting to do is unlawful. The United States Supreme Court issued a decision that mandated that the EPA regulate greenhouse gases under the Clean Air Act in the US. So they are obligated to regulate these emissions.